A man with a wealth of stories and (at the moment), all the time in the world to tell them, an hour with multi-Grammy Award winning songwriter, record producer and guitarist Gordon Kennedy doesn’t do him justice. He’s immediately warm and down to earth when we catch up over Zoom, and by the end of our conversation he’s offering to give Headliner a guided tour around The Musicians Hall of Fame in Nashville – and he really means it. You’ve gotta love that southern hospitality.

“I’m doing just fantastic,” Kennedy breezes in his relaxed, southern drawl (born in Louisiana, his family moved to Nashville when he was one), speaking to me from his home where he’s currently waiting for the green light to resume the Garth Brooks Stadium shows that started in 2019. Kennedy has written 15 songs recorded by Brooks and they have been friends for years.

“He is the best,” he says of Brooks. “There's nobody like that guy. If you ever get a chance to cross paths with him, you will know what I'm talking about. To do this with him is an adventure to say the least.”

Both his parents were professional musicians who came to Nashville hoping to advance their careers. His father, Jerry Kennedy, was a guitar player in the house band of Louisiana Hayride, and his late mother was Linda Brannon – a singer on the show with her own recording career.

“I remember growing up riding in the family car, and my dad was constantly reaching for the volume on the radio going, ‘I think I played on this!’ All these years later, I'm still learning records that he played on that I did not know about growing up – there's just too many to count. I was always surrounded by musical instruments, guitars and amps.

"My first record player was a Seeburg 100 jukebox that played 45 vinyl records, and there was an upright piano on the wall adjacent to it, and he would bring home reel to reel tapes of whatever he had produced in the studio that day, like Roger Miller, Jerry Lee Lewis, The Statler Brothers, Reba McEntire, and all these great artists.”

Kennedy’s father bought him a Fender Telecaster for Christmas when he was 15 years old, and he never looked back. In fact, he tells me that very guitar is about 30 feet from him as we speak.

“It ain't going nowhere! That just changed my life, and I have not done anything else since getting that guitar. I've never worked outside of being a musician, a songwriter and producer. From the time I was probably about six years old, all I wanted was to do what my dad did.”

This, along with a basement full of his father’s guitars, a jukebox and a piano, nourished and inspired him as he became one of music’s finest songwriters, producers and players.

Kennedy’s most successful composition is the international hit song Change The World, recorded by Eric Clapton for which Kennedy and his co-writers Tommy Sims and Wayne Kirkpatrick received a Grammy Award for Song of the Year in 1996. It also spent a record-breaking 81 weeks on the top of the charts.

“We had a label in New York that was entertaining us for about a year,” he remembers. “They kept saying to us ‘give us a pop song so we can put another zero behind the number’.”

During some downtime, Sims started playing the chord changes for the main riff that would go on to become Change The World, and the song then took shape after being passed around like a baton between the three songwriters.

“At some point Wayne would ask Tommy to record a little riff and put it on a tape, and then he would start working on some lyrics. He would get to a certain point where he stopped, and then I would finish his lyrics and finish the music. Tommy and I recorded the demo almost a year after the session where he had first played us that idea.

"What's interesting about that song is that none of us were ever together when each of us wrote the parts we wrote – it was all done separately over the course of a year, like a relay. Then it was another four years before Clapton had the song out on the radio and was a single from the soundtrack for the movie Phenomenon, and then the Grammys and all that happened.” 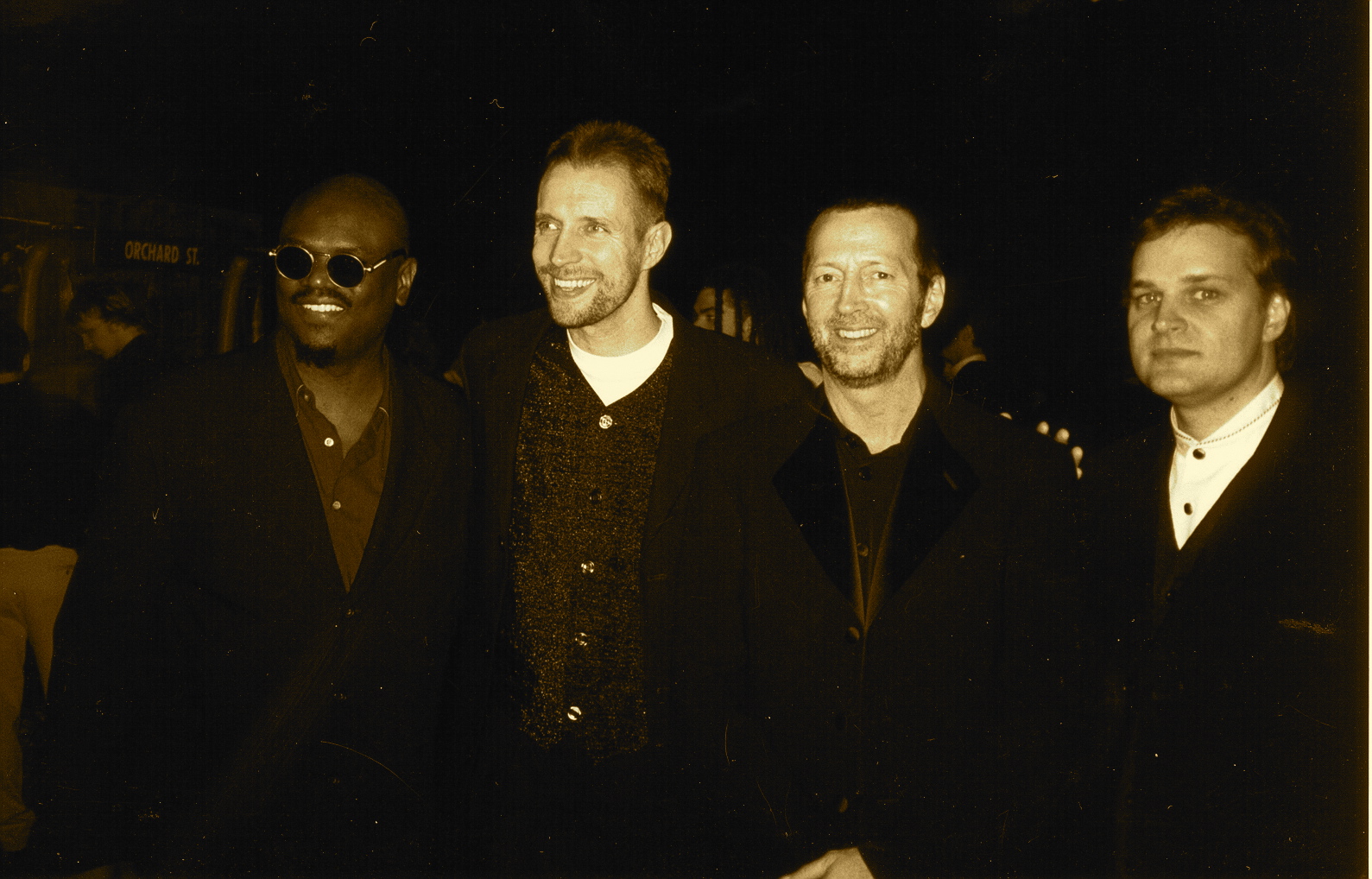 Kennedy not only received a Grammy for Song of the Year in 1996, but in 2002 a plaque on the Record Walk of Fame. In 2007 he also received a Grammy Award for Best Pop Instrumental Album, co-producing, composing and performing on Peter Frampton’s Fingerprints album, which he’s still pinching himself about now.

“What’s even more surreal to me is when I'm sitting on stage and I look to my left (in the case of when we were doing the two-man acoustic shows called Acoustic Raw), and Peter Frampton is just sitting there...” he trails off in awe.

“You’ve got to remember that when I was a sophomore in high school and the live album came out, it stormed! For the entire year that I was in school that year, there was a fella named Mark Vaughn, and every time we passed each other one of us would do it: 'thank you!' – we would imitate Peter Frampton at the end of all the songs on the record. So to say that this was a little bit of a cultural phenomenon during that time, I can't stress how much it was!”

Years would go by and somebody decided that Frampton and Kennedy should write together. Kennedy even had the honour of inducting Frampton for his star on the walk of fame in Nashville.

“When I gave the induction speech I said, ‘somebody decided to try to put us together, so if you'll look at his arms, you'll probably see twist marks where they twisted his arm to get him to work with me’. If you look at my arm, there's pinch marks where I've pinched myself to see if this is really happening! All they had to do was say, ‘do you want to write with Peter?’ ‘Yes’,” he says without pausing.

“He and I have been working together now for 21 years and it's just been such a thrill to participate in his music and be a go-to person for him when it’s time to write, or doing the two man acoustic tour.” 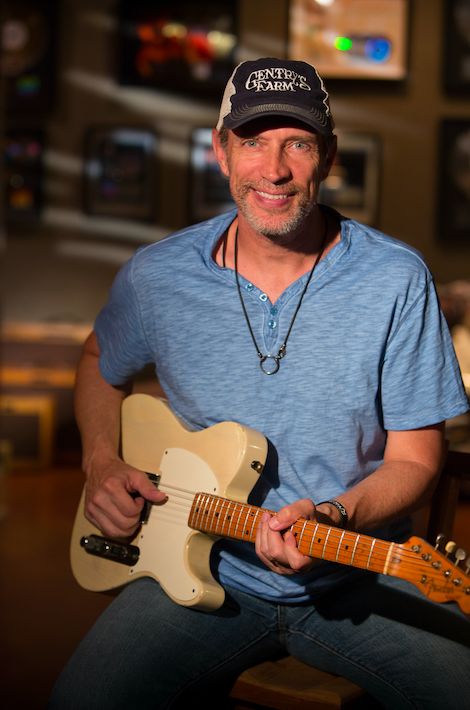 Without these Rubies, this amp would be a conversation piece for telling Chip Young stories. With them, it sounds glorious on just about anything.

Kennedy loves this quote because the first instruments he touched and played were the ones his dad used. Although professing not to be a collector, he does have an enviable collection of vintage guitars which he uses regularly.

“I never got them to hang them up or put them behind glass, I always thought of them as the working tools,” he points out.

A third of the guitars he uses are from his father, and Gibson and Fender are at the epicenter of his arsenal. Celestion is a big part of his sound, and he has been using their speakers for 20 years.

“It was only then that I even bothered to look into what's going on with speakers and amplifiers, and how much this plays into the end result of what I'm hearing. And that's when I bought a 1960 Fender Tweed Deluxe amp from a vintage guitar show. I got the amp home and plugged into it and it sounded great.

"But I could tell that the speaker had a problem. So my friends, and in particular Peter Frampton, were encouraging me to get it re-coned. I sent it to a local guy here in Nashville named Sammy to recall the speaker. While I was waiting for that Peter said to me, ‘you should put a Vintage 30 in the amp’.”

“Oh my gosh! It changed this amp into this little, mean monster of an amplifier, like it's a baby Marshall all of a sudden. I left that speaker in there for years because it sounded so great. That was the first time I realised that changing the speaker could change the sound of the amplifier so much. I used that Tweed Deluxe with that speaker for years and years.

“On the Fingerprints album, Peter used my Tweed Deluxe with the Vintage 30 for the one song Float. He liked it so much that he went and found his own vintage Tweed Deluxe. I think he has three now! I do too.”

Kennedy’s most recent vintage amp acquisition is a 1962 piggyback Fender Bassman rig in need of some replacement drivers, for which Kennedy chose the Celestion Ruby.

“This amp is dear to me because I got it from the great Nashville session player Chip Young, who played on Jolene by Dolly Parton,” he shares.

“I didn't want something that would reinvent the ‘62 Bassman because that's a great amplifier. I wanted to be able to plug a guitar straight into the amp and put a mic on it – that's how I like to do things in the studio, not put a bunch of stuff before the amplifier. I want to hear this ‘62 Bassman the way it's supposed to sound.”

He called John Paice at Celestion and asked what he recommended. He was keen on the Ruby – a 35W Alnico speaker.

“I put in a pair of those and oh my gosh, it’s a thing of beauty! The first time I put a microphone on it in the studio and I plugged an old Telecaster into it, it had this beautiful guitar tone. I would say it was approaching a Mark Knopfler kind of sound, which I love. It makes my guitars do everything I want them to. Whether it’s a vintage Telecaster or a Les Paul or an ES-335, it just makes them sound more like what they are. I’m hearing the guitar sounds I grew up on.

“Let me tell you, these Ruby speakers in the old Bassman rig I mentioned,” he enthuses. “I can do anything with this amp. I can cover Beatles, or Tom Petty in a tribute band I play in called the Petty Junkies, or plug in my ’61 Telecaster and get these warm tones. For myself, I don’t have much need for high-gain, high-saturation stuff.

“I like to stage the amp so that it’s clean when I back off on my guitar volume knob, then just a little crunchy when I turn it up. Let me emphasize the Celestion part of the recipe. Without these Rubies, this amp would be a conversation piece for telling Chip Young stories. With them, it sounds glorious on just about anything.”
Kennedy points out another reason Celestion speakers are the perfect match for him:

“Celestion doesn't stop thinking. I can't stop thinking with what I do; I have to keep thinking of what's next: ‘Can I do this better? Should I rewrite that verse?’ I have to continue that process, and thankfully there are people out there that put that blank screen or paper or whatever it is in front of themselves every day.

“It's like the Beatles said, ‘what haven't we done yet?’ I am fascinated by people who do that, and the fact that I can call John at Celestion and have him listen to me, interpret what it is I'm looking for, and be able to suggest something like that, and then the payoff being what it was is a beautiful thing that you wish could happen all the time. It's rare, but it's just the most wonderful result.”