Grimes: The Light of Consciousness

Creating a fictional goddess of climate change, releasing music begging artificial intelligence to enslave humanity, giving birth and now two years into a relationship with a certain billionaire that perhaps puts her in good stead to become the first musician on Mars; this is an attempt to summarise the recent life and times of Claire Boucher, aka Grimes.

Her Bowie-esque obsession with transcending mediocrity has manifested as five albums, most recently Miss Anthropocene earlier this year. Plus an eye-watering amount of visual art and directing of music videos. She’s so fiercely progressive as an artist, in fact, that there’s an argument for including her picture next to the word’s listing in the dictionary.

The Vancouver-born singer-songwriter and producer began releasing music under the Grimes monicker on Myspace in 2007 (she chose the name because she liked the name of the music genre, without knowing what it was), leading to the independent release of her debut album, Geidi Primes in 2010. This record, and the follow up of the same year, Halifax, were both well-received in the blogosphere.

However, after extensive-touring, it was the release of the analogue-synth driven indie-pop album Visions in 2012 that saw Grimes appearing on a number of significant ‘best of the year’ lists and it would quickly become her breakout album.

Particularly thanks to the popularity of singles Oblivion and Genesis; self-directing both music videos, in the former Grimes looks decidedly out of place at a racing sports event in a stadium surrounded by topless men, while she dances to the song in her headphones and bright pink hair. And in the latter, Grimes dances and sings along to the track in the back of a limousine, with an albino python around her shoulders.

She would later reveal that, given a near-impossible three week deadline for the album, she blacked all her windows and worked obsessively with very little eating or sleeping, and some use of amphetamines to keep her going. 2015’s record number four, Art Angels, took Grimes to even greater heights, with NME naming it their album of the year.

It spawned two singles, Flesh Without Blood, and the brilliantly-bonkers Kill V. Maim. Despite the massive popularity and success of the brighter and pop-leaning LP, Grimes revealed a fascinating relationship with her older material when she was later quoted as saying Art Angels is “a piece of crap” and a “stain on my life.”

Thankfully, she’s on record as stating that Miss Anthropocene is her best work. It’s undoubtedly a body of work that carries on her now well-established tradition of releasing music that is incredibly difficult to define in words, with the genre-fluidity seen in the drum and bass sounds of 4ÆM, the ethereal pop of Violence, and the heartbreaking electro-acoustic Delete Forever.

Prior to the release of this climate change concept album, Grimes had quickly gone from being known only to music aficionados to something of a celebrity when it was revealed she was dating billionaire inventor Elon Musk (the two had bonded via Twitter after a shared pun regarding Roko’s basilisk). Grimes and the Tesla/SpaceX founder recently had their first child together. 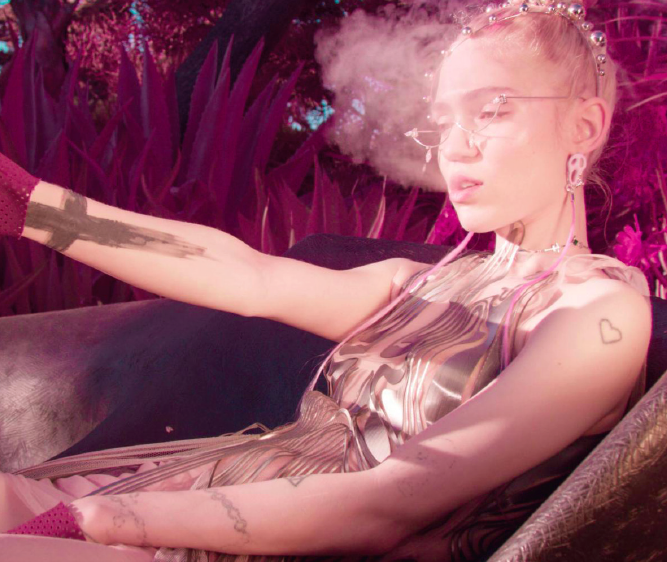 I’ve never made anything good in a mature and sensible manner.

“I’ve always said what I mean,” Grimes says as we begin chatting (she’s known to friends as ‘c’, not only because it’s the first letter of her name, but also because she likes the fact it’s a common denotation for the speed of light).

“Like, to a fault.” She’s speaking to the issue she’s had with being misrepresented in the media and having quotes taken out of context. It’s sad that even authenticity has a downside in this day and age.

Something of a cultural gatekeeper, she knows that some believe her name comes from Frank Grimes, a character from The Simpsons.

“Frank Grimes is an iconic episode and I retroactively don’t mind being accidentally named after it.”

Some of her other interests include watching UFC fights, anime (which can be seen in the cover art she always creates herself) and her musical tastes range from Post Malone and Mariah Carey, all the way to Aphex Twin and Tool.

After revisiting the incredibly intense process that went into the creation of Visions, Grimes reveals that “the album I’m making now is being created in a similarly dramatic fashion. I disagree with moderation. Art is the distillation of humanity, emotions, time and consciousness. Art is pain. I’ve never made anything good in a mature and sensible manner.”

It certainly makes sense that she draws on such lofty concepts for the channelling that is her music, and yet she also displays some modesty when discussing her achievements.

“My songwriting has improved,” Grimes says. “Or devolved, depending on who you ask! My new music is way darker than Miss Anthropocene. That album feels so far in the past, it’s insane. The world has irreparably changed since I put out that album, as have I.”