Guy Chambers: The Art Of Songwriting

After successful stints in World Party and The Waterboys, it was a memorable meeting with Robbie Williams in 1997 that would serve as the turning point for Guy Chambers, lifting his career to stratospheric heights. Here, the accomplished composer and songwriter tells us about his recent work, the Robbie years, and reveals how this unique partnership may never have materialised had it not been for the wise words of his mum.

It wasn’t a bad start for Guy Chambers and Robbie Williams when the pair first started working together. Undoubtedly a musical relationship that will go down in history, Chambers co-wrote an extensive and amazing list of tracks including Rock DJ, Feel, Millennium, Let Me Entertain You, and Angels, as well as working on Williams’ first five solo albums, which all reached number one.

Following 2002’s Escapology, Williams and Chambers went separate ways, with the latter going on to collaborate with other writers and artists for the next 10 years. They eventually reunited for 2013’s Swings Both Ways, 2017’s The Heavy Entertainment Show and 2019’s The Christmas Present, which, including Greatest Hits, brought the tally of number one albums that the pair have collaborated on to an incredible total of nine. Surely it makes sense then to make it a round number with 10?

“He does want to do another record, but obviously we can’t because of the situation,” says Chambers. “He’s in Los Angeles and no one can fly to America. Our relationship doesn’t work in different countries - we actually have to be in the same room together to create."

Chambers now wears many musical hats, but it was during his time with Karl Wallinger’s band World Party in the late ‘80s and early ‘90s when he discovered his love for writing:

“I would present songs to Karl and they’d often get rejected, but we did end up collaborating a bit,” he explains. “It was only when I formed my own band The Lemon Trees in 1992, with the first album Open Book, when I really got enough confidence to present them my songs and say this is what we’re going to do.

“I was about 28 or 29 by then so I was a late developer in pop music terms to be honest. It took me a long time to have the confidence, because you really need to have that if you’re going to be a good songwriter, going into a room with a stranger and co-writing or being on your own and presenting your songs to other musicians. You have to stand up for your work, and if someone knocks it, you’ve got to be able to take those knocks.”

It was also during the ‘90s when Chambers wrote with the likes of Cathy Dennis, best known for her work with Britney Spears. However, it wasn’t until Chambers met Robbie Williams in 1997 that his career really took off:

“I was earning a living before then, but I was really scratching around to be honest. It was very up and down,” he recalls. “I definitely knew straight away that it was going to work though. We wrote a song called South of the Border on the first day, which was one of the singles on the first album, and then on the second day we wrote Angels. The second day session was actually very short because I had a terrible sinus infection, and so we ended up writing Angels in an hour because I was in so much pain.”

Chambers is a strong believer of the showbiz adage “the show must go on”, and has subsequently never missed a show in his life. “I’ve been in all sorts of trouble with viruses and whatnot over the years, but we call it Dr. Showbiz - once you get on the stage to do it somehow he lifts you, and you just get through it.”

In fact, it was a twist of fate that caused Chambers and Williams’ paths to cross in the first place:

“Something I would say to young songwriters is, if you’ve got a date with destiny like with somebody you’re going to be writing with, don’t cancel on that person unless you have a really, really good excuse. I wanted to cancel that day, but my mum fortunately intervened. I phoned her up before Rob arrived and I said, ‘I really want to cancel because I felt that terrible.’ She said to me ‘look Guy, I’ve got a good feeling about today. Whatever you do, don’t cancel - just get through it.’ And she was right.

“Angels started with him walking in the room and singing this beautiful melody and beautiful words. I just sat at the piano and guessed the key because I’m normally quite good at that. I just dived in and it was in E major so I started playing the chords, and then somehow when he went to the next section he just kept on singing without any gaps. It was really weird - I think he had all of the words of the verse already written in his head. 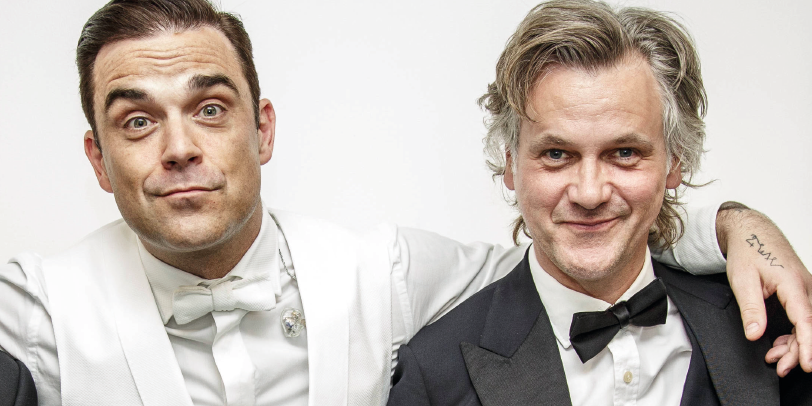 If you’ve got a date with destiny, don’t cancel on that person unless you have a really, really good excuse.

“He’d been to Ireland for New Year, and I think he’d had some deep spiritual conversations with people about angels, so those chats probably suggested some of the lyrics. I came up with the chords because at that point he didn’t play anything at all, so he was very reliant on a musician in the room to lead him.

“I’m quite old fashioned in that I like progression and storytelling in songs. Like in the song Feel; it has the bleakest possible verse you could imagine, but then in the chorus it goes to the major key and it’s like the sun coming out.”

It was after making Escapology, Williams’ fifth album, that the pair had their first ‘breakup’ of sorts. Chambers remembers Escapology as a very difficult record to make, primarily because Williams’ moods were moving so drastically up and down at the time.

“Our relationship was starting to deteriorate because we’d had disagreements about various songs, and I think some of the darkness in that music is through the pain of knowing my days were numbered in his world by that point,” reveals Chambers.

Thankfully, the pair rekindled their close partnership, and eventually went on to work on another three chart-topping albums together.

“When it broke down it was very painful, but I do believe that people shouldn’t be scared of pain. Look at the success of Adele for example - she’s not scared of emoting her pain, and people really relate to that. Rob is also very, very good at sharing how he’s feeling through his music, and I think that’s a very underrated thing.”

Some of Chambers’ more recent work however has been in theatre, which he says has proved to be an entirely different beast altogether. In 2016, he collaborated with Williams on the music and lyrics for Mark Ravenhill’s RSC stage show The Boy in the Dress – the stage adaptation of David Walliams’ book of the same name – which came about through his and Walliams’ already existing friendship.

“He came to the studio for a project we were working on, and he mentioned that the Royal Shakespeare Company was doing The Boy in the Dress,” says Chambers.

“He asked if I’d be interested in doing the music and I said sure. Initially they commissioned me to do it on my own, and while I was very flattered, I didn’t think I could do it, not least because there’s a lot of football in the story and I am absolutely clueless when it comes to football. Now Rob knows a lot about a lot of subjects, but one subject he really is an expert on is football.”

Chambers recalls how the pair waited six months for the script to be written for the stage play, following which they flew to LA to write the songs, which took just two weeks. Three of the songs that ended up being in the show were existing Robbie Williams tracks, including Disco Symphony, a previously unreleased disco number that Williams recorded with Kylie Minogue for The Heavy Entertainment Show, but never made the final cut.

“That was a real blessing to be honest,” remarks Chambers. “Because then it was just a case of rewriting the words to suit the story, which wasn’t easy. We had those initial two weeks, but then over the next two and a half years I think nearly every song got rewritten, plus we wrote another two new songs further down the line that were needed for the story. We were pretty much making changes right up to the previews.”

While there is a plan in place for The Boy in the Dress to come to London, these plans have been put on hold due to the Coronavirus pandemic, which has of course thrown up a massive bout of uncertainty for theatres who must be eager to reopen their doors. In 2018, Chambers wrote a children’s folk opera based on the Oscar Wilde short story The Selfish Giant, a personal project on which he had much more freedom to express his musical creativity:

“I was writing this piece when my mother died,” he recollects. “Losing someone hits different people in different ways; the grief gave me a tremendous amount of energy, which I basically channelled entirely into that piece.”

In Chambers’ own words, he considers himself firstly a composer, then an instrumentalist, and then a producer, “but the thing I enjoy the most is writing,” he reveals.

“That’s where I get my biggest buzz, and I get a similarly amazing buzz from performing - I really like the one-off nature of a performance. I’m missing that side of it quite a lot at the moment.”