Hal Lindes on Dire Straits: "They had me at Sultans Of Swing"

Hal Lindes is probably best known for his work as a full-time member of Dire Straits, which he was a member of from 1980 until 1985, however he went on to forge a successful career as a film and TV score composer after leaving the band. He reflects on his first impressions of Dire Straits, explains how Tina Turner ended up recording Private Dancer, and delves into his guitar and amp collection.

You were a full-time member of Dire Straits for five years in the ‘80s; how did you come to join the band?

When David [Knopfler] left the band, I got a call asking if I was interested in coming down and having a play. I was like, ‘Yes, sure!’ because Mark [Knopfler] was on fire at that point. As a guitarist, I wanted to check them out and see what all the fuss was about firsthand. I was very happy to be invited down, and I didn't really know what to expect.

It was super chill and there was nobody there but the band; they weren't auditioning a tonne of people. I think they might have seen one person before me. It was a funky old place and it had a huge window overlooking the Thames; there was a terrific atmosphere there.

One by one, each of the members walked over and introduced themselves and we would chat, so it was more like a social thing than a, ‘get your guitar and play’ thing. I immediately was struck by how much I liked the guys. They're all super interesting and we got along really well. At some point Mark said, ‘Fancy having a play?’

He handed me a Walkman, which was a big deal back then. I'd never even seen one. I'd read about it, so it was quite a big deal to be handed a Walkman. He goes, ‘Have a listen to this, and don't worry about the changes, just get the spirit of it’. So of course, the song was Tunnel Of Love, and those changes are not for the squeamish! So I'm listening to this thing going, ‘Holy crap!’ – and that was the first thing we played, Tunnel Of Love. It was just amazing; it was so explosive.

The chemistry was there and we locked in together. I think we all knew that this was it for us at this point. Then we played a couple of other songs. This was in the summer around August, so you still had very long nights and you could see the sun setting over the Thames through this big window. The sun was starting to go down, it was a big red ball of flame and we did Sultans Of Swing.

That was probably one of the most magical moments that I had with the band. They had me at Sultans. Afterwards Mark said, ‘Do you want to grab a glass of wine?’ So we went to a wine bar and we were just chit chatting, and at the end he goes, ‘So do you want to come back tomorrow?’ So I was like, ‘Okay’.

At the same time that I was auditioning, there was a keyboard player auditioning called Alan Clark. We started the tour in Canada and we went down to the US. At one point I was talking to Alan when we were having breakfast and I said, ‘I was never officially asked to join the band’, and he goes, ‘Yeah, it's funny you said that because neither was I’. All Alan and I ever got was, ‘Do you want to come back tomorrow?’

So we went over to Ed Bicknell and said, ‘Did we get the gig or what?’ He laughed and said, ‘Of course you're in the band!’ But that just illustrates how casual the whole thing was. 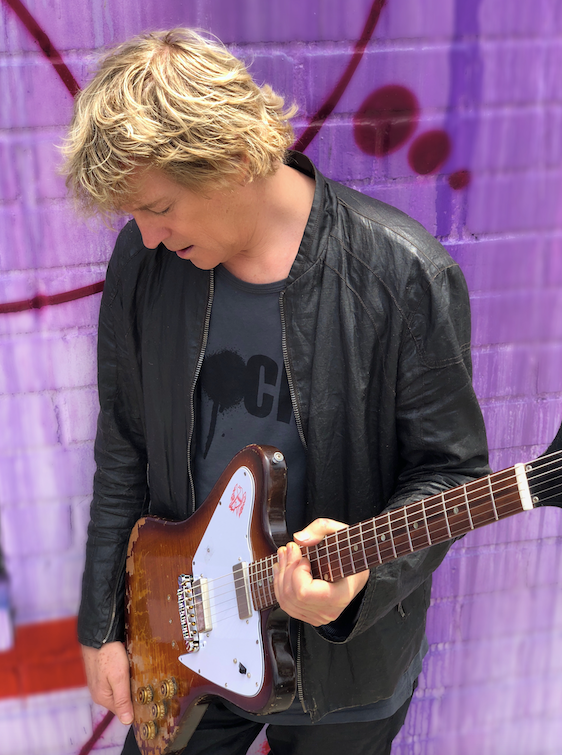 That was probably one of the most magical moments that I had with the band; they had me at Sultans Of Swing.

Mark Knopfler wrote Private Dancer, which was recorded by Tina Turner. How did you come to play on this, and how did it come to be a Tina Turner song?

We came in for rehearsals at the same place by the river and Mark must have had about 20 songs – all cracking, good songs. The original idea was to have Love Over Gold as a double album, and Private Dancer was one of those songs. It was very different to Dire Straits, but I loved the whole lyrics about being a private dancer and being from the woman's perspective.

In a lot of his songs, Mark takes on a character and he gets away with it, but I think it was a little bit too much trying to take on the character of a woman dancer. I campaigned heavily with Mark; I kept going, ‘Come on, we gotta do this!’ But sadly it didn't get there. It did get recorded, but it got shelved. Then Tina's manager was over recruiting songwriters for Tina's album and he met with Ed and asked him if Mark had anything.

He goes, ‘Actually, Mark does have a song that would be perfect for her’, and that's how I ended up being on the Tina version. She loved our version of it, but they couldn't use it because it was recorded under our deal with the record company, so the record company owned it.

She wanted us to recreate it exactly as we recorded it, but the problem with that was Mark was not available so that's why it ended up being the rest of the band without Mark.

Being American, they wanted a star guitarist, so they got Jeff Beck in to do the solo. I put more of a dance feel on it; it's kind of like I’m doing my version of a Nile Rodgers rhythm on it. Mark’s version was pretty amazing. He would never release it, but I wish he would. I think even now in this day and age, he would absolutely get away with it, too.

It seems likely that you have an enviable guitar collection…

I have a problem! I need therapy [laughs]. I try to hide them like an alcoholic who hides his bottles of alcohol. My wife has no idea, but once in a while she might go, ‘Did you know there's three guitar cases under the bed?’ I’m like, ‘Oh, really? Wow, how did that happen?’

I think the gag is, ‘I only need one guitar more’ or something. I think it's deeper than just a guitar; it takes you back to your youth. There's a red Gretsch Duo Jet that I got when I was in Dire Straits that I used to use on stage.

That guitar, to this day, is my number one. It's phenomenal. It doesn't quite sound like a Gretsch, it doesn't quite sound like anything. It has its own unique tone that is very musical. Actually, Mark played it on the recording of Two Young Lovers and Twisting By The Pool. I'm a huge Telecaster guy too, I don't know what it is about the Telecaster – it’s just so basic. It just has a couple of knobs and a couple of pickups; if you can't do it on a Telecaster, you're probably not gonna be able to do it on anything else either.

I love all the wacky stuff like baritone guitars and high strung guitars which are basically the top six strings of a 12 string without the bottom six – so that pitches you an octave above where you would normally be. I love ukuleles and the mandolin too. 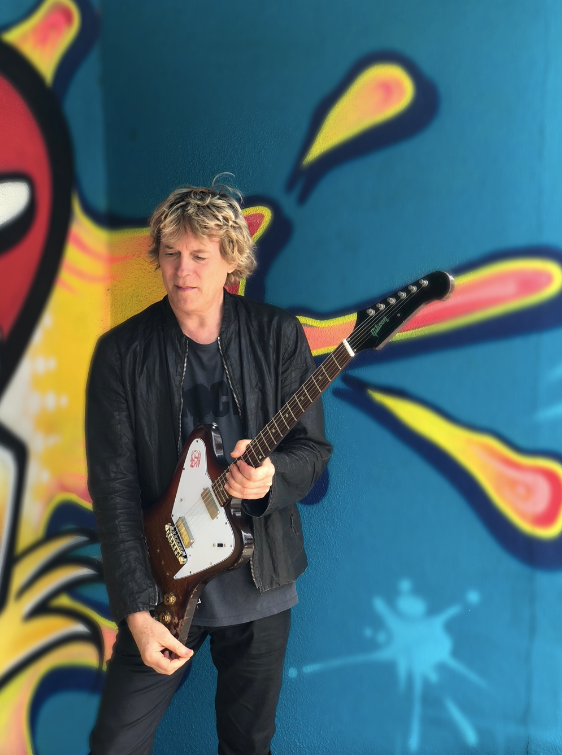 I just want to hear the sound that's in my head, and for some reason, the Celestions do that.

What was the earliest point in your career you recall playing through a Celestion speaker?

In my teenage years I used to play in a club band and we’d perform six nights a week. I got a Marshall, and I can't even imagine how I used that in a nightclub. It must have been so loud; I’m amazed I can even hear you! But I loved the speakers. I remember there were four of them in there, and in those days you'd be wearing flares and would try to make those flares rattle from the wind pressure from the speakers.

They sounded phenomenal when you pushed them super hard, but also if you took the volume back you got this crystal clear, really musical, warm sound out of them. I took the back off and I saw these green things and I had no idea what they were. They were green Celestions [G12Hs].

Later I got an AC-30 Vox, which when I stopped using the Marshall, was my go-to. I was using Blue Vox Bulldog speakers, and I had no idea that they were Celestions, but years later I found out those were actually Celestions as well.

Those were my two favourite speakers, the Greenbacks and the Bulldogs, and I found that if you put either of those in a Fender amp it was a game-changer. One of my favourite amps is a Fender Super Champ, which came out in the ‘80s.

I have a Celestion G10 Greenback in there and it's phenomenal. It’s one of the best amps I've ever heard, and I use it 90% of the time. I have a closet full of amps but that's the one that gets used. I also have a Fender Deluxe Reverb and I have a Greenback in that too, which sounds so good.

What is it about the Celestion tone that appeals to you?

You put other speakers in you think ‘Yeah, that's okay, it's fine’. There's just something about the Celestion that just works for me. I don't question it. A lot of people tend to think of Celestions as something you would drive really hard because they want that raunchy, overdriven sound, but I play pretty clean.

I play a lot with my fingers and it's a great, clean tone – and clean tones can be tricky because you don't want it to sound thin or piercing. You want something that's full bodied, rich, has a lot of character and has a lot of warmth. And that's Celestion – there's nothing out there that even comes close.