Today would have marked the 85th birthday of music legend, Johnny Cash. An artist not to be tied to a single genre, Cash exerted his influence over rock and roll, blues, folk, rockabilly, country, and gospel. It’s no secret that Cash was a complex man, to quote the great Kris Kristofferson: “He's a walkin' contradiction, partly truth, partly fiction.” And these contradictions made Cash the compelling character that he was. His life was littered with amazing stories (the stories of his on-the-road mischief are legendary!), and so to honour this year’s milestone birthday, we’ve decided to find 85 of the most badass facts we could about the Man in Black.

1) Johnny Cash isn’t his birth name. His parents named him J.R. Cash as a compromise between the names “John” and “Ray.” When he enlisted in the Air Force, Cash gave his name as “John R. Cash.”

2) Cash took only one voice lesson, after which the teacher advised him not to let anyone change the way he sang.

3) Cash organised his first band The Landsberg Barbarians while in service.

4) While on the road in the late 1950s, Cash and his band bought 500 baby chickens and let 100 loose on each floor of the hotel they were staying at.

5) In Daughter Tara’s book, Recollections, when asked about his first girlfriend, Cash responded “Louise Nichols, but she didn’t know it.”

6) Cash’s first gig with the Tennessee Two was playing for a group of elderly ladies in a church basement.

8) On his private ranch in Hendersonville, Tennessee, a male ostrich kicked Cash in the chest, leaving him in intensive care with five broken ribs and internal bleeding.

9) He once broke his toes trying to kick the bars out of a jail cell. The incident occurred at a jail in Starkville, Mississippi after Cash was incarcerated for trespassing.

10) He met his first wife, Vivian Liberto, at a skating rink in San Antonio.

11) During Cash’s divorce, he shared an apartment in Nashville with legend Waylon Jennings.

12) As a 22 year old inmate, Merle Haggard saw three of Cash’s shows in San Quentin. He later credited Cash for inspiring him to work on his singing.

13) While touring, Cash and his band flushed cherry bombs down a toilet, destroying the plumbing system.

14) The camper Cash used for his amphetamine binges in the desert was named Jesse James. It had its windows spray-painted black so Cash could sleep during daylight hours, “but also because I just liked to spray-paint things black.”

15) During his first two years touring, Cash clocked over 100,000 miles of road travel.

16) Muhammad Ali wrote Cash a poem called 'Truth', which he kept locked in his safe.

17) Before one meeting with his addiction counsellor, Cash drove a tractor into the lake beside his house.

18) When asked by daughter Tara about 'a memory of a cousin’ for her book Recollections he quoted being in love with his cousin Glenda when he was six. “But she got married and I got over it.”

19) In 1984, after being with Columbia Records for over 30 years, Cash felt they were no longer showing interest in him anymore. He decided to record a song so awful that it would force Columbia to cut his contract early. The title of the album was Chicken in Black, the lead song about Cash having his brain transplanted with that of a chicken. It backfired on Cash as the song became successful. Nevertheless, Columbia and Johnny Cash parted ways soon after. 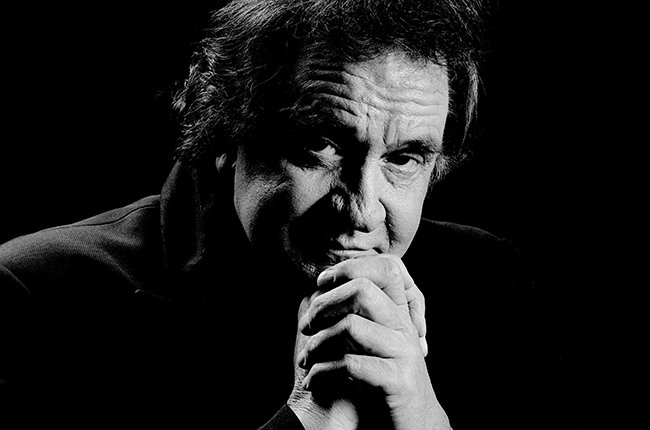 21) The Man Comes Around came from a dream Cash had about the Queen of England.

22) At the Air Force base in Germany, Cash learnt to translate Russian morse code.

23) Cash recruited singer Johnny Horton to help him hypnotise himself in order to bring back the words to a song written in his sleep. The track became the hit, I'd Still Be There.

24) The tune for I Walk the Line was inspired by a recording of Bavarian guitar music Cash had accidentally played backwards.

25) When told he couldn't export a rare wood from his farm in Jamaica to Tennessee to customise his tour bus with, Cash decided to make packing crates out of the wood. Once the crates arrived in Tennessee, he simply disassembled them and used the wood for JC Unit One's stateroom.

26) He was part of a country super-group including Waylon Jennings, Kris Kristofferson, and Willie Nelson

27) He used to carry around a jar of instant coffee and ladle spoonfuls of it into the coffee he ordered in restaurants.

28) While checked into the Betty Ford Clinic in the 1980s, Cash met and befriended Ozzy Osbourne.

29) Before a show in Glasgow, Cash saw two policemen holding onto a drunk man. Apparently he had a ticket and wanted to get into the show but had been turned away at the door. Requesting the police let him go, Cash got him a chair and he sat at the side of the stage for the rest of the show. After the show they took him back to the Hotel and got the lad a very large pot of black coffee!

30) Cash was the first American to know about Stalin’s death. He was working as a radio operator for the military at the time, and was the first person to receive the message.

32) President Jimmy Carter was his cousin by marriage (June Carter was a distant cousin).

33) On his tours in the early 1960s, Cash was billed as 'America’s Foremost Singing Storyteller'.

36) While touring in the '50s, he developed a kick-ass Elvis impression.

37) Cash received a Grammy for Best Country Album for his 1994 album, American Recordings.

38) His follow up album Unchained earned him another Best Country Album Grammy in 1997.

40) In 2002, Cash released American IV: The Man Comes Around which included the Nine Inch Nails single, Hurt, earning Cash three CMA awards in 2003; and the acclaimed video for Hurt won an MTV Award and a Grammy.

42) Cash and his first wife, Vivian, named their first daughter, Rosanne, after Cash's nicknames for Vivian's boobs: Rose and Anne.

43) Cash was the first person ever to be successfully sued by the US for igniting a forest fire. Back in 1965, his truck, Jesse James, had an oil leak and caught fire, sparking a forest fire that eventually burned down 508 acres in Los Padres National Forest. Unfortunately for Cash, the park was home to 53 endangered condors - 49 were killed. Cash was then brought to court and when questioned by the judge, he retorted: "I didn't do it, my truck did, and it's dead, so you can't question it."

44) Although he never went to prison, Cash was arrested seven times and served seven nights in jail for different incidents.

45) Cash spent a night in jail in El Paso for smuggling two socks full of amphetamines across the Mexican border in his guitar.

46) The title for Walk the Line was a suggestion from Carl Perkins.

47) Cash advised Jerry Lee Lewis not to record Whole Lot of Shakin’ Goin On, preferring his rendition of Jack Clement’s It’ll Be Me - what a mistake that would have been!

49) He became an ordained minister.

50) At Cash's San Quentin gig in 1969, he debuted a new song named after the jail. The bitter lyrics, written from the point of view of the inmates nearly sparked a riot, and Cash was tempted. 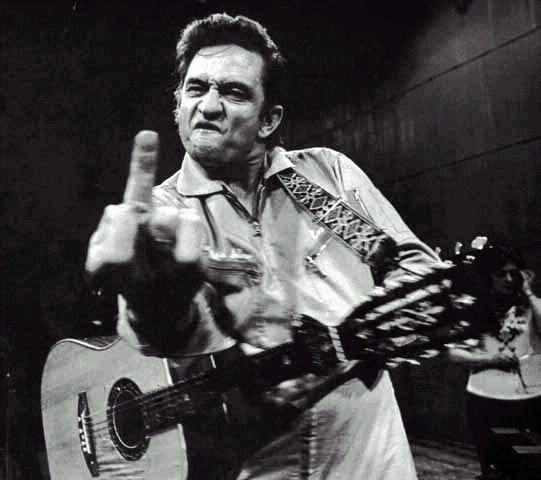 Just remember this, son. The higher up the ladder you get, the brighter your ass shines.

51) While in the Air Force, Cash travelled to London for Queen Elizabeth II’s coronation.

53) Rick Rubin spent $20,000 on a billboard ad showcasing the image of Cash ‘flipping the bird’ to get back at the country music scene for not giving Cash’s music airtime.

54) While in the Air Force, Cash wrote poems and short stories under the name Johnny Dollar.

55) Cash helped to dig his own brother’s grave.

56) For 20 years, Roy Orbison lived next door to Cash, and they often collaborated together.

57) Cash helped get Roy Orbison’s records into the hands of a Sun Records executive which led to his signing.

58) When Orbison’s house caught fire, killing two of his three sons, Cash bought the abandoned lot where the house had been and turned it into a memorial grove, promising never to sell it.

59) Cash held a ceremony at his estate to scatter close friend Faron Young's ashes. Unfortunately, a gust of wind blew the ashes onto Cash's car. “When I came home, I found I had Faron on my windshield. I turned the wipers on. There he went, back and forth, back and forth, until he was all gone.”

60) Cash’s signature guitar sound happened by accident; it’s the only way he knew how to play.

61) Cash used to swap birthday greetings with Elizabeth Taylor, whose birthday is the day after his.

62) During a hospital visit for surgery, Cash smuggled in a card of valium in his bandages. Half of the pills dissolved into the wound.

64) Blue Suede Shoes came from a story he told Carl Perkins about an airman who used to tell Cash not to step on his blue suede shoes.

65) The first time Cash met honky tonk pioneer, Ernest Tubb, Tubb advised Cash, “Just remember this, son. The higher up the ladder you get, the brighter your ass shines.”

66) At his house in Jamaica, Cash had a 'Billy Graham room' with a guest bed specifically for Graham.

67) The same night Cash got fired from the Grand Ole Opry, he crashed June Carter’s Cadillac into an electrical pole.

68) He once shared a Manager, Bob Neal, with Elvis Presley.

70) “We’d wake up and find the kitchen was on fire because he done something wrong while making breakfast,” claimed step daughter, Carlene Carter.

71) He once forgot his front door key so cut the door down with an axe.

72) He wrote, produced, and narrated Gospel Road, a movie about Jesus’ life, which featured June Carter Cash as Mary Magdalene.

73) The Masons rejected Cash’s application for membership ‘on moral grounds’.

74) When Cash first moved to Memphis, he enrolled in a radio class hoping to become a DJ.

75) Cash owned a recording studio in Tennessee which had an exotic animal park attached.

77) Cash stabbed a reproduction of the Mona Lisa that was hanging in a hotel with a bowie knife because it didn’t quite reach his standards.

78) In his lifetime Johnny Cash released 96 albums and recorded over 1,500 songs.

79) When visiting the White House, Cash compared shoe sizes with President Clinton. Cash was a size 13, Clinton a size 12.

80) According to his daughter, Tara, "Chili tastes better when cooked at 60 miles an hour on a tour bus by your Dad.”

82) After his wife June died, Cash had her Wildwood Flower album cover painted on the elevator in his house.

What a man! We will ensure to celebrate The Man in Black’s 85th by keeping his music blasting throughout the day. Johnny Cash power hour anyone?