Emmy Award-winning composer and pianist, Kris Bowers creates genre-defying music that pays homage to his jazz roots with inflections of alternative and R&B influences. So how would he adapt to composing the score for Netflix’s hot new period drama, Bridgerton? He promenades Headliner through the process of putting a modern spin on a classic genre.

Bowers has composed scores for an eclectic range of hard hitting films and documentaries, including Ava DuVernay's devastating Netflix mini-series When They See Us, Kobe Bryant's Muse, Green Book, Dear White People, and has recorded, performed and collaborated with Jay-Z and Kanye West on their Watch the Throne album.

So far, so cool. So I was surprised to see that Bowers was the composer behind Netflix’s new period drama romp, Bridgerton. Sure, a certain Duke of Hastings sent hearts aflutter and a record-breaking 82 million households around the world collectively swooned at the technicolour Regency period romances and gasped at the scandals that unfolded (Duels at dawn! Pregnancies out of wedlock!), but is Bridgerton cool?

To be sure, I watched the whole thing, strictly for research purposes.

Released on Christmas Day, the show reached a captive, house-bound audience ready for some guilty-pleasure escapism into a world where Zoom doesn’t exist. And guilty they were – the show reached millions that remembered the thrill of Mark Darcy in his wet shirt in Pride and Prejudice, those who weren’t even born at the time, and everyone in between.

Yes, the husband-hunting themes may be the same, but Bridgerton is a period drama that appeals to the modern viewer.

What Bridgerton is slick at is rejecting historical accuracy with its refreshing multiracial casting. In fact, the characters of colour are some of the richest and most powerful on the show, and you can’t fail to notice its winking soundtrack filled with classical covers of modern songs, including recent hits by Ariana Grande, Taylor Swift and Billie Eilish.

When it came to composing the score, Bowers was deemed just the man for a modern take on this classic genre. Since 2013, the Juilliard-educated pianist has established himself at the forefront of Hollywood’s emerging generation of genre-defying composers.

What sets Bowers apart is his unique ability to compose music that resonates across such a diverse continuum of artists, storytellers and audiences. Naturally, he used his instrument of choice for most of the score, although other traditional instruments that sounded like they were from the time were included, but with modern flourishes.

When first offered the job, Bowers could not have imagined that the series would go on to smash Netflix’s record to become its most-watched show by a wide margin (The Witcher only managed a mere 76 million in its first 28 days).

“I don't think I could have ever seen this coming!” he begins. “I assumed that it would have a following just from it coming from a book…” he trails off.

“I've always been a fan of romantic movies and shows myself; I think I’ve watched more romantic comedies than my wife! I knew that aspect was going to be successful and popular because it was handled really well. I think that it's really easy to make a love story cheesy; to make a love story that really feels like it's saying something a little different is a challenge, and I felt like this was doing that.” 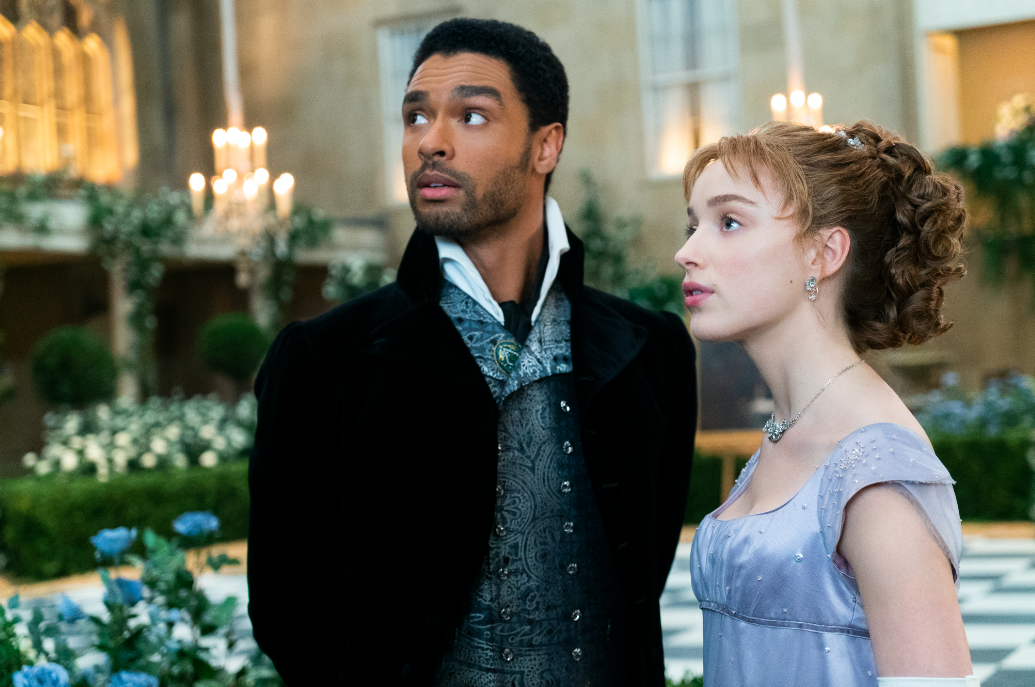 Bowers’ first idea was to take a really modern approach to the sound using classical instruments, but incorporating more of a pop sound and style of production. Not all ideas are meant to be, and he scrapped that idea in favour of a more traditional sound more becoming of a show set in the early 1800s.

The first step was to work on Simon and Daphne’s theme – primarily because Phoebe Dynevor (who plays Daphne) had to play the piano in a scene as she thinks of the Duke – the instrument being a very strong identifier for the couple.

“That was one of the first things that I wrote and it really helped figure out a huge aspect of the sound, because, technically speaking, in the era that the show takes place in, the music would be more like early Beethoven than Ravel or Debussy – because that's much more 20th century.”

Showrunner Chris Van Dusen sent Bowers some classical pieces as a reference for the theme:

“I was like, ‘okay, let me not try to be the musician that's going to be really specific to the time period and all that; let me think of a way to represent this in a little bit more of a modern way’.

"At first, we were incredibly modern and I tried writing pieces with the orchestra and then taking those pieces, sampling them and then trying to make beats with those orchestral elements. It felt like a pop producer or a hip-hop producer had made the score, and that was really not working,” he admits.

“Then I tried to do something that was really, really time specific and time appropriate, and it felt more like the classical era of classical music – not necessarily more impressionistic or romantic, and that felt a little too stuffy and a little too old school. One of the things that really helped was going back to that Simon and Daphne theme and thinking about why that worked so well.” 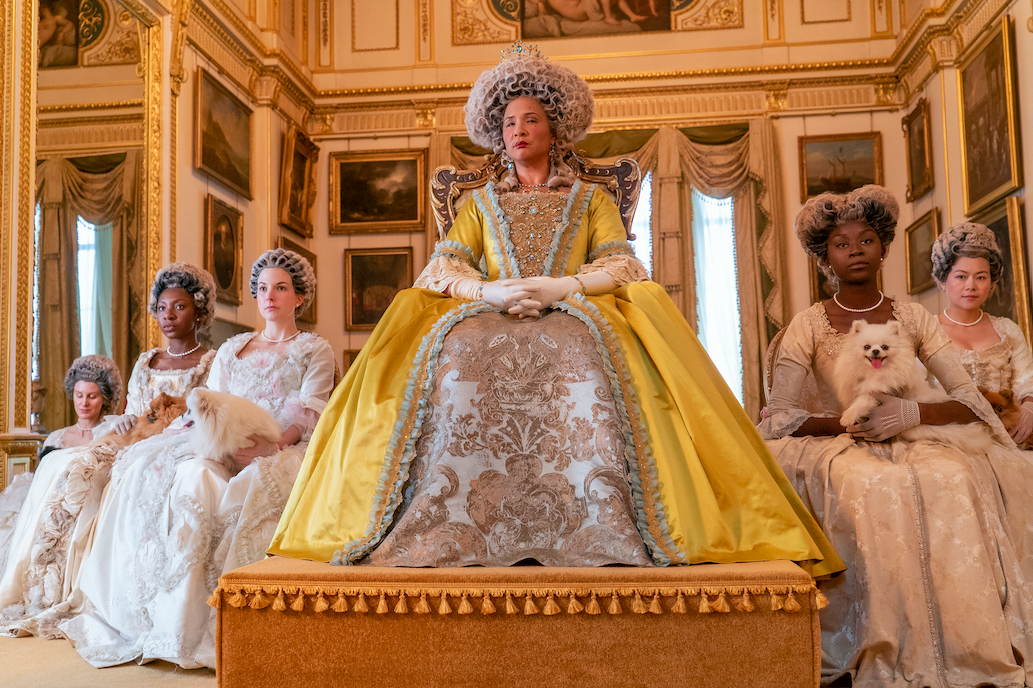 Alex Patsavas, the music supervisor, then introduced Vitamin String Quartet (the L.A-based group famous for their classical covers of contemporary bangers) into the soundtrack, who are behind the show’s covers of thank u next, bad guy, Wildest Dreams, etc.

“Those different arrangements that The Vitamin String Quartet did really opened me up to how we could approach the score to still having this classical instrumentation, but trying to have more modern rhythms and feels, because so much of it is dance music – it's music we want to be able to move to and feel.

"If you put on some old classical music, most people are not going to know how to dance to that, and really it's because of the rhythms and tempos and the way that things feel, not the instrumentation. So we took the modern elements of music, as far as harmony or rhythm and all of that, but still orchestrated it in this traditional way. We wanted to find something that felt a little bit fresh and modern.”

I ask Bowers if it is hard not to get caught up in the excitement of a new project, resulting in over-scoring a key scene or moment?

“It's such an interesting process to figure out how to balance that, but there's so many times where I'm erring on the side of less is more,” he answers.

“Not only as a musician, but also as a fan of film. Some of my favourite films are films that either don't have any music, or have very, very little music. I think that's just because I really love film and storytelling, and so I can really feel similar to that as far as watching things and trying to ask myself on a regular basis, ‘does this really need music?’” 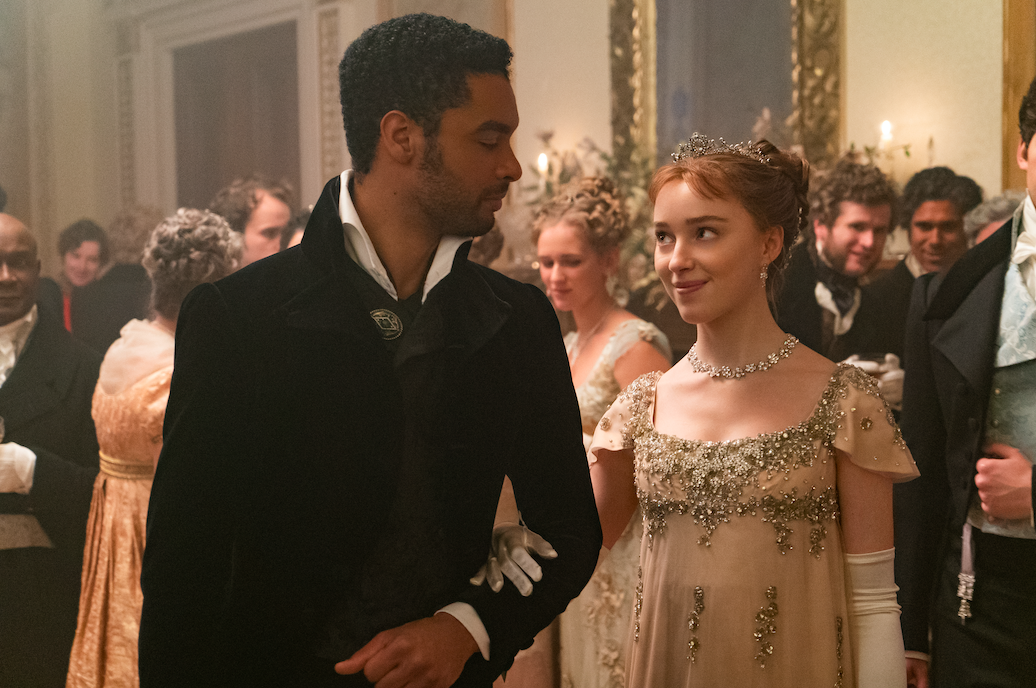 When you're hearing this huge orchestral sound, it's really just eight musicians that are at home recording themselves and layering themselves over and over again.

Bridgerton had finished shooting by the time the pandemic took hold of the world, so the biggest challenge for Bowers was working out how to record the score from home.

“We did it all remotely, so when you're hearing this huge orchestral sound, it's really just eight musicians that are at home recording themselves and layering themselves over and over again,” he shares.

Music contractor Peter Rotter and his team quickly figured out what musicians had at home in terms of recording setups, and Bowers’ mixing engineer Steve Kay spent time with each locked-down musician to make sure everything ran smoothly.

“He would have them do a test recording, we would listen to that and give them notes, like, ‘move the microphone a little bit further away or a little closer’. There were a couple of musicians that we really wanted to play on this score who didn't have equipment, so we would help them figure out what equipment to buy and how to set up their space. We had a pretty good process where we would send all the music to each musician and give them two days to record themselves.

“I just wanted to make the process as easy as possible for them and make it so that they have a little bit of time to turn this around and feel flexible. I can't say enough how much I appreciate the fact that they still put so much love and heart into the sound of this music, because when you're playing in a room of 30 people, if you're not really feeling it that day it's really easy to be pulled along by the rest of the ensemble into the music.

"And with this, everybody's at home by themselves dealing with whatever they're dealing with – on either side of recording – so for them to sit down and spend that time recording and still make it feel as incredible as they did shows how much the music is just as much in the performance as it is in the writing of it – sometimes even more. If we didn't have that effort from them, our score would not have been as successful.”

Bowers shares that especially on the bigger moments, they mixed in some MIDI strings with all of the live strings recorded.

"I'd say 95 per cent of the piano is live, but anything that isn't live with piano or harpsichord or any of that stuff was Keyscape by Spectrasonics.”

In January 2021, the series was renewed for a second season (although to the dismay of the internet, Regé-Jean Page will not return), and Bowers confirms he is returning to compose the score for round two:

“I'm looking forward to getting back into it. This year we really want to try to get a head start with the music because last year the toughest thing was recording that much music in that short amount of time.

"Towards the end of the series, we had seven to 10 days to turn around sometimes an hour of music, so we want to try to get a little bit of a head start this year. By this summer I should be diving back into it.”

The cast of Bridgerton will return to production in the spring of 2021, with many hoping that this means season 2 will hit our screens in 2022. Patience, dear readers, is a virtue after all.