Lambert: The Masks We Wear

“I had just picked up my visa the day before Trump said no Europeans are allowed,” Lambert says. “They just said ‘here’s your visa, you can go!’ And then I woke up the next day and Donald Trump said I wasn’t allowed to go. [laughs]” Pianist and musician Lambert (he feels ‘composer’ is far too lofty a term) isn’t referring to anything as controversial as the American President/reality TV star’s travel ban on predominantly Islamic countries, but rather the forced travel ban due to the Covid-19 outbreak. The masked musician had been due to head to the States for his debut headline tour.

While of course a disappointing state of affairs for Lambert, it nonetheless shows the surging progression of his career over the last few years. Born in Hamburg and based in Berlin, he’s gone from a virtual unknown to snapping on the heels of neoclassical peers such as Nils Frahm and Ólafur Arnalds.

Looking at Lambert’s London shows alone, his debut performance saw him at the tiny Servant Jazz Quaters in East London, and in October he performed a landmark concert at the more opulent King’s Place in the absolute hub that is Kings Cross. Now with four solo albums to his name, he’s just released a new EP, the fittingly titled Alone II.

It’s also worth mentioning Lambert’s most salient feature: in all performances and promotional material, he wears an imposing Sardinian mask with protruding horns, snout and symbolic detail.

He looks a little like a demonic bull, a wonderful juxtaposition with his very tongue-in-cheek live shows. I like to think he’s wearing the mask now as we chat online. “Yes, I always wear it,” he says. “Even when I’m cooking or going to the bathroom.”

Lambert picks up on me referring to him as a composer, so we get chatting about why he doesn’t feel it’s the right noun for him.

“I have some trouble with these exaggerated, high-culture terms that everyone in this modern classical world uses,” he says. “I come from a different background — I always played in bands on different instruments. I mainly see myself as an instrumental songwriter. Jazz and pop culture have always been my main influences. So it would feel weird to call myself a (puts on a posh voice) composer.” 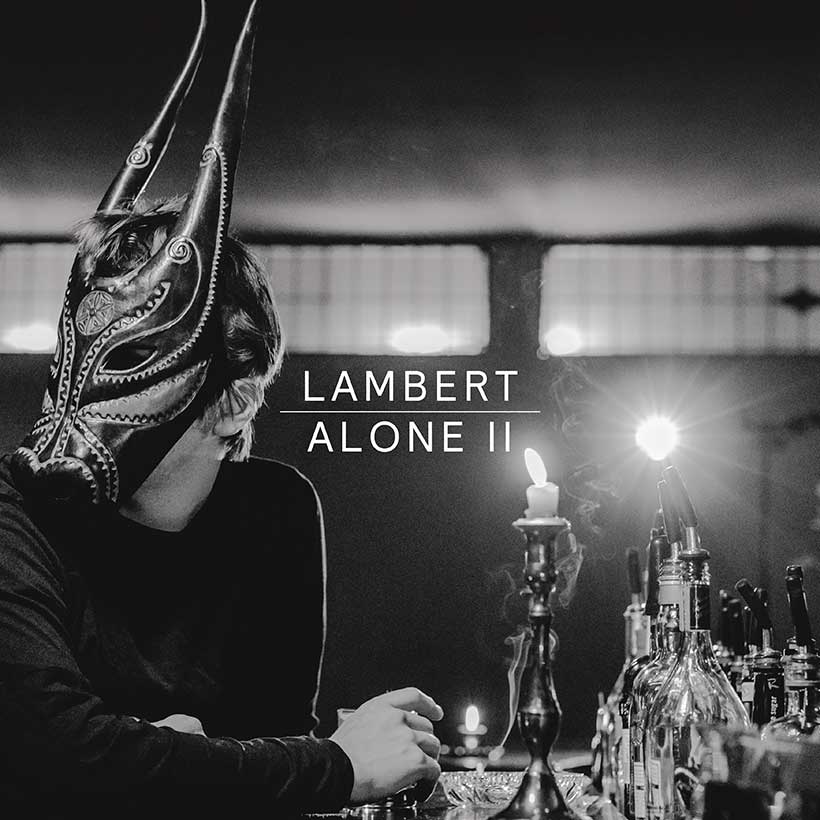 Yes, I always wear it...even when I’m cooking or going to the bathroom.

Part of Lambert’s allure is his impenetrable mystery; his real name is not listed anywhere, and I am one of a privileged few to have seen him maskless when I interviewed him in Berlin. Just as mysterious is his background, which he alludes to as being one in jazz when “jazz was in a bad place.”

A friend encouraged him to release his music after hearing his piano music. Lambert happened to know Nils Frahm from Hamburg, but had to Google his music to realise there was such a demand for neoclassical music.

Attend a Lambert live show, and his resistance towards the word ‘composer’ begins to make more sense. Despite his slightly ominous mask, he cracks lots of jokes and encourages an occasional ‘woo’ from the audience if it feels right.

“This is how I like to go to concerts,” Lambert says. “I like to relax. I think if you try to force the audience to feel that it’s very important and make everyone really quiet, for me it makes the experience less special. So when I tell a joke and let them know they can cheer if they want to, the audience know they can relax, get a drink if they want to. I think it opens the mind of the listeners more and I find I can play even for two hours, because I’ve given the listeners space to rest and relax.”

One of the singles from the new Alone II EP is titled Tegel. Asking Lambert why he named a song after the Berlin airport, he enthusiastically explains: “if you get a cab there, it drives you directly to the check-in counter. And then you move five more metres, and you’re at the gate! There are about 20 meters between the entrance and the gate. I know there’s a downside to flying so this might not be the most popular name — we need to find solutions there for sure.” With Tegel Airport set to close to make way for the new Berlin Brandenburg Airport, hopefully this sumptuous piano piece will serve Tegel’s legacy.

If this wasn’t eccentric enough, the prior single’s name is Leicester. So to add to the Midlands city’s recent triumphs of winning the Premier League and discovering the bones of King Richard III, it now has a Lambert original named after it. “All the songs on these EPs (Alone and Alone II) are named after places I’ve visited alone,” Lambert explains.

“Sometimes I do tour on my own, and this was the idea behind it, and also to go back to writing just piano music like on my first album. The shows I’ve played in Leicester are funny because it’s always on this shitty piano, but I have so much fun with it! And both times I went to bars afterwards with the people who booked me.”

With 2019’s album True perhaps being Lambert’s boldest statement yet with its instrumentation and analogue synthesizers, it’s wonderful to hear him return to his roots with these deceptively simple, impressionist piano pieces on Alone II.

While this music was all written before the pandemic, its title just so happens to fit perfectly for a world slowly coming out of lockdown. And with some films employing Lambert’s musical services in the near future, there’s never been a better time to follow the fascinating journey of this masked crusader.