Leslie Gaston-Bird On Immersive Audio, Racism And Women In Audio

Born in Dayton, Ohio, audio engineer Leslie Gaston-Bird now finds herself based in Brighton, UK, racking up some seriously impressive and eclectic credentials along the way. These include (although are by no means limited to) being a former Governor-at-Large for the Audio Engineering Society, a member of the Recording Academy, the Association of Motion Picture Sound and Motion Picture Sound Editors, a former tenured Associate Professor, and owner of Mix Messiah Productions. Gaston-Bird is also the author of the book Women in Audio, and is currently writing a PhD called Immersive & Inclusive. She explains the key reasons for putting pen to paper for both of these important works.

Women in Audio features almost 100 profiles and stories of female audio engineers that have achieved success throughout the history of the trade. What inspired you to write this?

LGB: It discusses women and those who identify as women and audio. Around 2004 I went to my first AES convention and I met a woman named Terri Winston who had a booth with a new programme she was starting called Women's Audio Mission. I was like, ‘what's this women's audio mission?’ That was one of my inspirations.

So I'm like, ‘okay, there seems to be a dearth of representation here. What is going on?’ And that question,has been answered in various ways over the years: why aren't there more women? What made my experience at NPR so different?

Where did you start with researching for the book?

LGB: Around 2016, Focal Press a division of Routledge) was asking for people to come up with ideas for books, and I thought about my experience with Terri and some other organisations like SoundGirls.org. I thought writing a book about women in the field was a great idea; but I thought it would be like writing a research paper and that I would go to the library, find some books and articles and compile them into a resource for people.

Then I came across this feminist album called Virgo Rising that was released in the 1970s, and I emailed the engineer for that album Joan Lowe. She got back to me, aged 94 years old at the time.

She said, ‘well, that was a long time ago, and my hearing isn’t so good now, but I'll tell you what I can’, and she sent me an email detailing how they recorded an all-woman performed, produced, released and engineered album.

It dawned on me that interviews would be a much better way to go. I began calling people and thought, ‘this is kind of massive; this is gonna be bigger than I thought’.

A few months later, in February of 2018 I got an email from a man named Dana who asked me if I was writing a book about women in audio, to tell me that Joan had passed away. I was crushed.

He sent me an envelope full of pictures of Joan from the time she was a little girl onwards. She didn't have children, she didn't have a family – there was no one else who would have received these pictures, except for me.

When I got these pictures, I remember standing in my living room and looking up at the sky, and thinking, ‘what I'm doing here is more than a research paper. This is history that would have vanished’. It put a fire under me. It occurred to me that this is not a research paper, this is a living, history document. 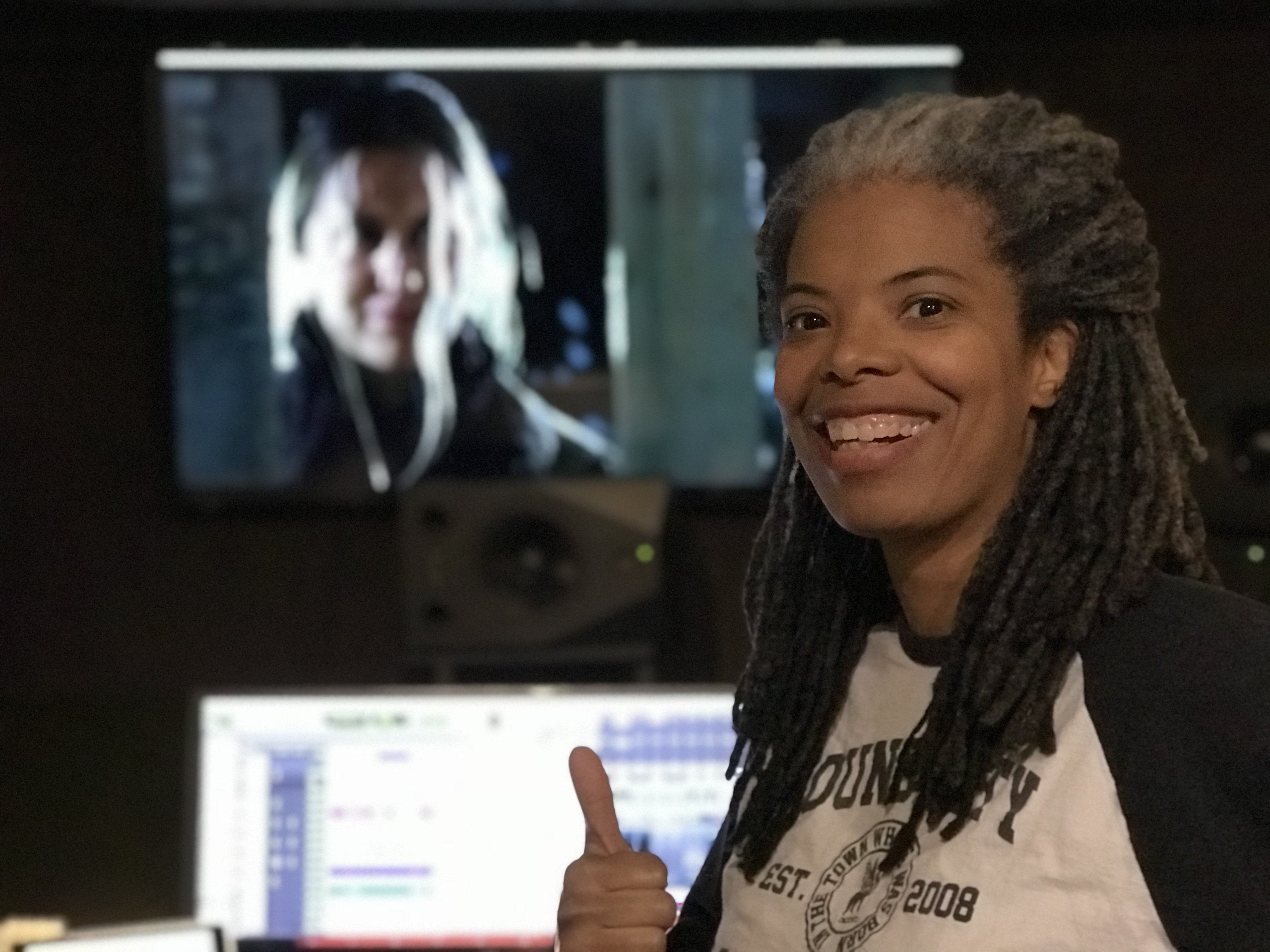 The societal barriers are set up to create the subliminal message that this just isn't for you.

LGB: I started finding other stories. Marie Louise Killick – who's from Brighton, by the way – designed a new, curved-tip stylus for playing phonographs. She was made an offer from a company that wanted to buy it, but she said no – she wanted to make it. She didn’t want to get bought out.

Then Pye Radio, Ltd. infringed on her patent, and she ended up suing them — , and she won. But they wouldn't pay her and she died homeless – she would have been a millionaire. Her story is in there.

Then there’s the story of Elisabeth Löchen, who with Pascal Chedeville developed the LC Concept projection sound format, and she had to litigate a case of patent infringement against DTS. She had written an (unpublished) book called Jurassic Fight, which was about how she left her kids in France who were ages nine and 13 at the time, and she went to Los Angeles to pursue the lawsuit.

She ended up just about broke, and she went to Steven Spielberg to ask for help, who helped her settle the case against DTS. I was really naive to think that I was just gonna write a book on 'women in audio'. It's not that basic, or simple.

Your PhD, Immersive & Inclusive is about the rise of immersive sound across the entertainment industry and also focuses on the lack of representation when it comes to women and people of colour working in this field. What events inspired this PhD subject?

In any industry, when you talk about barriers to entry, a lot of the time the hopeful answer is: none. You assume that if you're smart and interested, have resources, whether it's scholarships, or money, you can do whatever you want to – be a nuclear scientist, or whatever you want to do. But there are societal barriers that create the subliminal message that this just isn't for you.

For example, Georgina Born and Kyle Devine wrote about the “gendered classroom” and the fact that of children in the UK expressing an interest in music technology, around 40% were girls between the ages of nine to 13.

That number starts to go down as girls progress to secondary school, and by the time they get to A Levels, it's around 18%. By the time people are enrolling in university, the numbers are down to 10%. They call this the leaky pipeline.

One of the barriers to entry is this gendered classroom, which is this assumption that this is a male space, and that all these speakers, buttons and dials are where the guys hang out. We know this isn't true.

People like Dr. Elizabeth Dobson (Yorkshire Sound Women Network) and other feminist collectives are changing that narrative. They are intervening earlier with girls to introduce them to the field. In fact, Dobson has catalogued almost 70 such organisations.

I'm glad I'm not the one saying this industry is racist.

How do microaggressions contribute to this feeling that the immersive audio world is not one for women?

LGB: There have been studies into the concept of microaggressions, such as one by Amandine Pras and her colleagues at the University of Lethbridge, which have concluded that in the recording studio, microaggressions are even worse than they are for STEM (science, technology, engineering and mathematics) in general. These microaggressions are one barrier to entry.

Microaggressions are things that happen every day. For instance: “'you're very articulate”, and then in the [implied] parentheses, “for a black person” – that's a microaggression. They build up and they wear you down.

I have heard from women my age and younger who have left the industry because they cannot deal with it. These are not shy women or weak women, they just get tired of it. These are women who are writing research and who are sharing their experiences with me, so in turn I'm engaged in this research because of the shit I have been seeing.

Another barrier to entry is obviously the money – you need a computer, software, loudspeakers, the right headphones, or you need a head tracker, or a virtual reality headset. You need money to make content. This differs a bit from learning to use a DAW to make stereo music. This is immersive audio which requires a different workflow and understanding of the related psychoacoustics.

How much is racism a factor in the immersive audio world?

Somebody somewhere is doing the same thing I'm doing for work and they're thinking, ‘I’m the only one good enough to do this, I can’t imagine a black person doing what I can do’. That's racism, and that's bias. I'm not saying everybody's like that, but I'm saying that even the fact that such a thought would cross my mind shows you the effect that microaggressions and macro aggressions have on women and people of colour: I know I can do it, but I don't think they think I can do it.

So there’s this process of having to prove yourself and work hard. There’s the perception that as a black person or woman (or both), you can make zero mistakes.

So when we talk about the specific barriers for immersive audio, they're the same as the various barriers for other industries. But also we have to look at who is working in immersive audio. I'm looking at the catalogue of remasters that are coming out. Look at that catalogue, go to the title and look at the Dolby Atmos mixes.

Don't only ask yourself about the diversity of the music that is chosen to be remastered, ask yourself, ‘who's remastering them? Who's getting that work?’