Ludovico Einaudi On The Music Of Nomadland: "I Wanted To Create Something That Was Open And Free"

With a career spanning three decades, composer and pianist Ludovico Einaudi’s captivating music has become some of the most recognizable in the world. Einaudi began composing film soundtracks in the mid ‘90s, and his melodic musings can be heard across a number of films and television productions, including This Is England, The Intouchables, I'm Still Here, the TV miniseries Doctor Zhivago, and most recently on the soundtracks to Oscar, BAFTA and Golden Globe-winning films Nomadland and The Father.

It’s likely you’ve heard one of Einaudi’s more famous pieces already, even if you can’t quite put your finger on where exactly you’ve heard it. That’s because his emotive composition, Nuvole Bianche was featured in the horror film Insidious, popular British TV drama, This Is England ‘86, and in a poignant scene in Ricky Gervais’ TV series, Derek.

Reflecting on one of his most well known compositions from his home in the picturesque Italian countryside surrounded by mountains and vineyards, Einaudi tells me that this particular piece is his very own gift from god:

“It's strange because when you write a piece of music, you can’t predict which piece is going to become popular,” he shares.

“When I wrote all the pieces on Una Mattina, I didn't know that Nuvole Bianche was going to become my number one piece. It's the most popular piano piece in my repertoire. It was composed when I was enjoying the first beautiful grand piano that I could afford in my life.

"I just moved into a new flat and I had these big windows where I could see the sky, and I remember it was spring and those beautiful white clouds were passing by like slow ships in the sky. The piece came about like this, without thinking too much.

"The best pieces come suddenly; you don't even know how they arrive! I consider them gifts from god, because when you have to write a piece of music and you think too much that you must write a good piece of music, sometimes it doesn't arise.

"I prefer to compose without purpose. Sometimes it's when you are not thinking too much, and your mind is more relaxed...it's in those moments that you write your best music.” 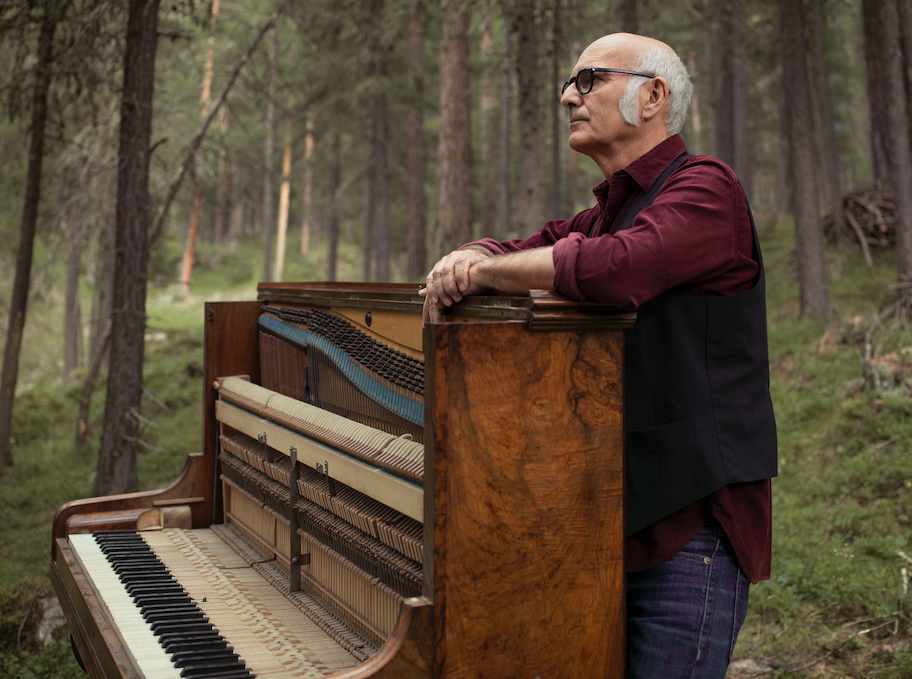 This music is perfect for the vision of Nomadland, which is a film about the freedom of moving around and enjoying life without being tied down.

Following the economic collapse of a town in rural Nevada, Fern (Frances McDormand) packs her van and sets off on the road, exploring a life outside of conventional society as a modern-day nomad.

The film received six nominations at the 93rd Academy Awards, including Best Director, and the most prestigious honor of the ceremony, Best Picture.

The fim’s expansive, dreamy soundtrack features music from Einaudi, including tracks from his Seven Days Walking series, which became the fastest-streamed album ever from a classical composer on its release.

On searching for the right music for her film, Zhao explained how she came across Einaudi’s compositions:

“I went online to search for classical music inspired by nature… [it led me to] a YouTube video for his Elegy for the Arctic. I then started listening to Seven Days Walking and was so amazed by how I felt Ludovico was walking in the Alps. I felt like he and [the character of] Fern were walking in parallel; their shared love of nature connects them, and I knew then his music would fit perfectly with our movie.

“I wanted the music [for Nomadland] to feel like the inner dialogue that Fern has with herself. In this silent moment as she’s going through all these different landscapes, it’s as if she is talking to us, making us understand how she has changed.”

Einaudi shares that he immediately loved Zhao’s script, remarking how well matched his compositions were to the themes of the film.

“I was very happy to be involved because I enjoyed the project so much, and for some reason the film’s vision of life is very similar to what I like about life; I love the vision of this film. With this music I wanted to create something that was very open and free. I wanted to create a feeling that the music is almost improvised, or created in the moment of the recording.

"Every time I was playing the themes, I was trying to approach them from a different angle, so I decided that I wanted to create a project that was divided into seven days, because every day there is a new version of the piece that comes back with a different form and a different interpretation.

“The idea is connected to walking, because when you do the same walk every day, it's slightly different,” he explains.

"I think that feeling of freedom that you have in the interpretation of this music is perfect for the vision of Nomadland, which is a film about the freedom of moving around and enjoying life without being tied down with the cage of structured life.”

Once Zhao had finished filming, Einaudi shares that she was unsure about how to structure the film, but that his music helped guide her.

“The music is connected to beautiful moments of travelling, and Chloe told me that when she had all the material that she had shot, she was a bit confused on how she would edit the film and make it work,” he recalls.

One of Einaudi’s favorite uses of his music in the film is a piece called Low Mist, which perfectly accompanies a scene where Fern takes a reflective walk by the sea, weighing up a big decision:

“It’s a beautiful walk by the sea, and it's very beautiful photography; she's walking with the wind and she's transported away with her thoughts,” he recalls.