MAX’s new music continues to dive deeper into spreading a message of being true to who you are, wearing what you want to wear, loving who you want to love, and feeling accepted. His most recent collaboration with SUGA of BTS, Blueberry Eyes, has accumulated over 100 million streams and over 30 million YouTube music video views since its release. MAX explains how he bonded with the BTS star over basketball, and why he’s done people-pleasing.

Last year was a big year for MAX personally and professionally; he welcomed his daughter into the world and released his sophomore album, Colour Vision.

Joining me on a call from “La-La land”, MAX (real name Maxwell George Schneider) is adjusting to the very early mornings and sneaking in naps where he can, but is loving every second of fatherhood:

“Being a dad is the best. I had this thought yesterday: it's like when you get your driver's license and you can suddenly drive a car, and you're just like, ‘whoa – I'm doing this right now’ – that's what it's like being a dad! This feels like a lot of responsibility,” he laughs.

“It just changes everything. It changes your perspective; you feel everything more, and time is so different – it’s much more precious. It's remarkable. She's the coolest little human. I can't wait to watch her grow up.”

Before making a name for himself in the music industry, MAX worked on Broadway, modeled with Madonna for an international Dolce & Gabbana campaign, and co-wrote the song Show You How to Do for the Disney show, Shake It Up. He later portrayed Zander in the Nickelodeon TV series How to Rock and starred in the Nickelodeon original film, Rags as Charlie Prince. He was killing it in film and TV, but despite that, he knew that music was his real calling.

“I've always been a people pleaser, and I always said yes to a lot of stuff – you don't want to turn down an opportunity,” he says. “I got super lucky to do so many different things. There was a certain point where I got offered a big movie, and it was a lot of money – more than anything I'd ever been offered. It was a leading role.”

Faced with the choice of taking the role (and huge paycheck), or going on tour and creating the next piece of music, MAX made his decision:

“The choice was so clear to me. I realized so many other people would die for that part that I was offered and be so excited for it. I realised I was not fully alive on set in the same way I was on stage. Life is short so you’ve got to choose the thing that you're the most passionate about and make it work. That was my big moment because this was literally the choice between the two.

"I had been making both work for so long, and I just wasn't really doing great at either one. I was doing well, I just wasn't doing my best,” he clarifies. “By committing to music I've been the happiest, and I've also been the most fulfilled, for sure.” 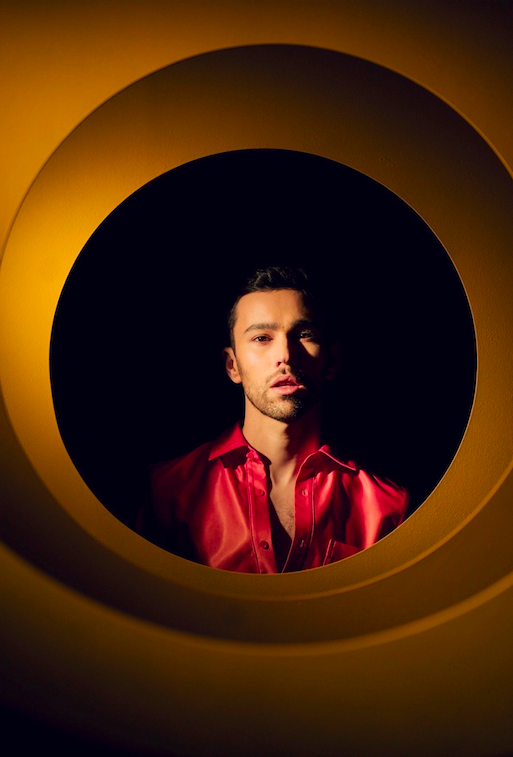 I've always been a people pleaser, and I always said yes to a lot of stuff.

How big a role are we talking?

“I don't even remember what it ended up being called! I wonder if it even came out... It wasn't like Spider Man or something – that would be amazing. It wasn't like, ‘oh, he was gonna be the next Batman’ – that would have been hilarious,” he laughs.

The decision proved to be the right one – the single Lights Down Low from his first full-length album Hell's Kitchen Angel generated over half a billion streams globally and is certified triple platinum in the US, platinum in Canada, and gold in the Netherlands and Australia.

The song means a lot to MAX as he wrote it for his wife, Emily, when they first started dating, and encapsulates so much of his personal story – he proposed to her by singing it. However, being a marketable young male artist, it’s often frowned upon to appear anything other than single. MAX was done with people-pleasing, and proudly featured Emily in the music video, as well as uploading a wedding video version.

“There was a lot of backlash from a lot of the people I worked with at the time about being open about my marriage,” he shares. “I feel like a lot of people in pop music are married now! But at the time, it was very taboo to not be a single ‘pop guy’, so I took a big leap with that song in deciding to be open about the story behind it so I can tell people when they interview me, and I don't have to lie. I can't lie; I am the worst liar in the world!

"That started my wife being in the music videos in subtle ways, so we just realized, ‘let's make this a fictional world that we create, but with the little tidbits of truth of our actual story’. Looking back a couple of years later, it is pretty amazing how that's been the one that started it in a real way. I'm grateful for that because it’s so much better than something that doesn't mean much.”

Looking back, MAX feels he only scratched the surface with Hell’s Kitchen Angel, leading him to take more risks on Colour Vision, where he has been as authentic as possible.

“With Colour Vision, it was an arc and a full storyline that I wanted to really commit to, because my favourite artists have always done that. I love Purple Rain by Prince and Igor by Tyler, the Creator – he commits to a very specific aesthetic and a world – and you feel part of it.

So I said, ‘why not try to do that myself in my own way?’ In more of a Disney meets Wes Anderson way that's a little more about my personality and my world. It just gives it more life, and I feel like I didn't do that as much with the last album because I was too focused on getting the big songs.

“I want to get the best songs, but I do want there to be a through line and a cohesive sound. I've always been sort of all over the place sound-wise, and I love being able to experiment in that way. But I like the full album to feel like that same cohesive world and sound for that specific time. I really wanted to create a world and a culture for fans to hopefully dive into.” 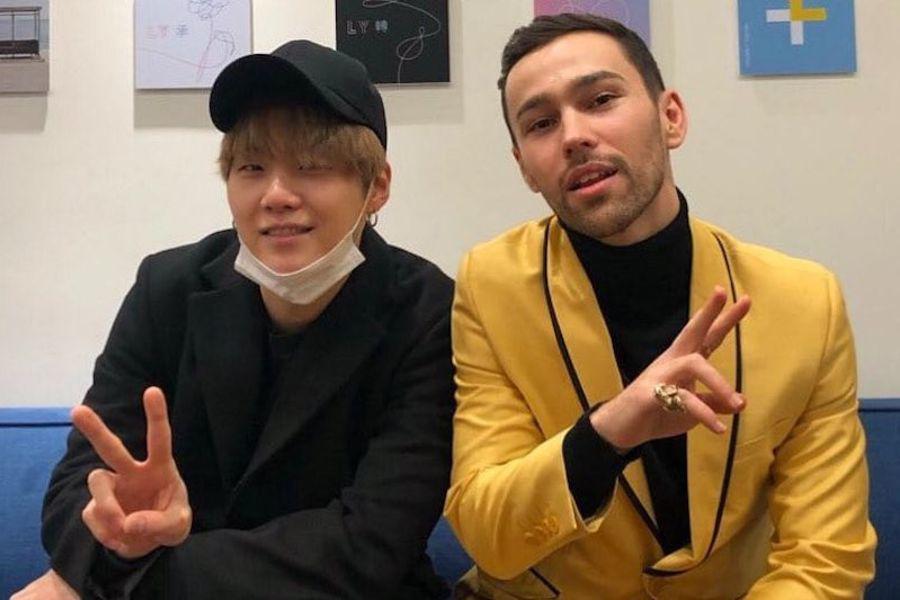 I’ll look back on this in 10 years and definitely go, ‘dang, that was a fun, crazy ride throwing that Korean/English song together with one of the coolest, biggest artists in the world.

Recent single, Blueberry Eyes features SUGA of BTS. MAX first said he wanted to remix a BTS song back in 2017, which did end up happening in 2020 when he featured on SUGA's D-2 track, Burn It. Their relationship blossomed from there.

“I was a fan, and SUGA and Jungkook have both given love to my music over the years, so I would just give love back and Tweet them sometimes. Then I went to Korea and met with SUGA for the first time, and we got along really well. He asked me to be a part of Burn It, and months later we hung out again and I asked if he'd be a part of the album.

"I sent him every song, he heard Blueberry Eyes and really liked it so he added his spin – I love that he's singing in his native language. I’ll look back on this in 10 years and definitely go, ‘dang, that was a fun, crazy ride throwing that Korean/English song together with one of the coolest, biggest artists in the world. Life is crazy!”

MAX is a diehard New York Knicks fan, which him and SUGA bonded over:

“The Knicks have always been pretty notoriously bad, but I'm just basketball obsessed. When you're obsessed with anything and you casually mentioned somebody else…” he trails off.

“Fun fact: SUGA's name means shooting guard in Korean – he played basketball growing up. It's those little things outside of doing music that I think sometimes bond you, and that definitely bonded us.”

MAX admits that he was surprised that SUGA picked out Blueberry Eyes as the song he wanted to hop on, saying that for him, it was more of a sleeper hit.

“I mean ‘sleeper’ in that it was bubbling under the surface of something that I knew would hopefully connect, but it wasn't an obvious single to me,” he clarifies.

“He definitely elevated it with what he did. That's why I respect him as an artist because he does what he feels; especially with his Agust D mixtape, he's so expressive and very raw with his lyrics. I loved that he was so specific about which song he wanted to jump on.”

MAX now can’t imagine the song without the guest verse. Did he have to check Google Translate to check SUGA’s lyrics?

“Luckily he works with some really great people who translate,” he reassures me. “He speaks English, but he has a really wonderful translator. I asked her what it meant because I heard it and I was like, ‘it sounds really cool, I hope it fits in the story!’ And it did fit perfectly in the story – he did it masterfully.”

The combination of MAX’s fans and the BTS Army has resulted in the music video being viewed over 30 million times, which again features MAX’s wife – who at one point (heavily pregnant at the time) is submerged in a bath full of blueberries.

“I feel like that's just sort of the theme of our relationship – we think of these insane things to do,” he laughs. “I say, ‘baby, you're pregnant – you want to get this bath full of blueberries and learn this Korean verse as our vows?’ And she says, ‘Yeah, let's do it!’ I'm lucky that I get to experience it with her.”

MAX wanted the music video to feel as if “Disney made a baby with Wes Anderson”. MAX and Emily studied and memorised all of the Korean lyrics to SUGA’s verse for the video, which he says were pretty tricky to learn – not to mention performing face to face.

“We had a lot of help! It took us about two and a half weeks; we did a new line every night. We shot the whole thing in a day and there were so many setups, but there were definitely moments where we burst out laughing.

"I have this really bad habit of bad nervous laughter with her, and in the worst circumstances. She might be really angry and I nervously laugh – it's one of her biggest pet peeves. She was like, ‘if you start nervous-laughing when I'm giving birth, I'm gonna kill you!’”

The BTS Army picked up on the nod to SUGA in the video – in the form of a cat – a reference to the nickname the fandom has given him.

“I wanted to throw something in there that felt like the fans would know that it was a homage to him even though he couldn't be there in person. They call him Lil Meow Meow; it's definitely a term of endearment.

"I didn't think it would be as big of a thing as it became, but I remember telling the directors, ‘guys, we have to throw the perfect little cat moment – it could be just a split second, but it's got to be in there’. So my directors spent hours looking through this generic cat footage and found the perfect cat. I was pretty sure the fans would get it, and luckily they did – it was a big hit!”