This year’s MPG Awards took place right in the the middle of a snow storm; ‘The Beast from the East’ met 'Storm Emma'. But the good and the great, bar a few who sadly couldn’t make it due to the snow, gathered once more at the grand Grosvenor House on London's Park Lane for the annual MPG Awards, this year being its 10th anniversary.

Those 10 years have seen legends such as Youth, Dave Stewart, Chris Blackwell, Geoff Emerick, Trevor Horn, and Sir George Martin pick up awards, with attendees showing support for all within their industry. Headliner, as ever, was incredibly proud to be Media Partner for this fantastic event.

To start off the night, legendary producer, Tommy D, sponsored the reception, serving up cocktails created with his whisky brand, 808. As usual, there was a great vibe, people bumping into old faces, and meeting and greeting the new.

The Music Producer’s Guild have been keen to highlight that this year, a quarter of the nominees were women, which is a huge success, and can only be a sign of things to come.

After everyone took their seats, BBC Radio 6 Music’s Shaun Keaveny took to the stage to be the night’s host. His intro was funny, and self deprecating, and it was clear he understood his audience, regaling us all of tales from his musical past.

Pride of place we had Catherine Marks, picking up UK Producer Of The Year following on from her 2016 win for Breakthrough Producer. Last year, she worked with Mercury Prize shortlisted band, The Big Moon, as well as The Amazons, and St Vincent, amongst others. It was heartwarming when she was announced as the winner, as you could feel the support from the audience at having a female win this accolade. 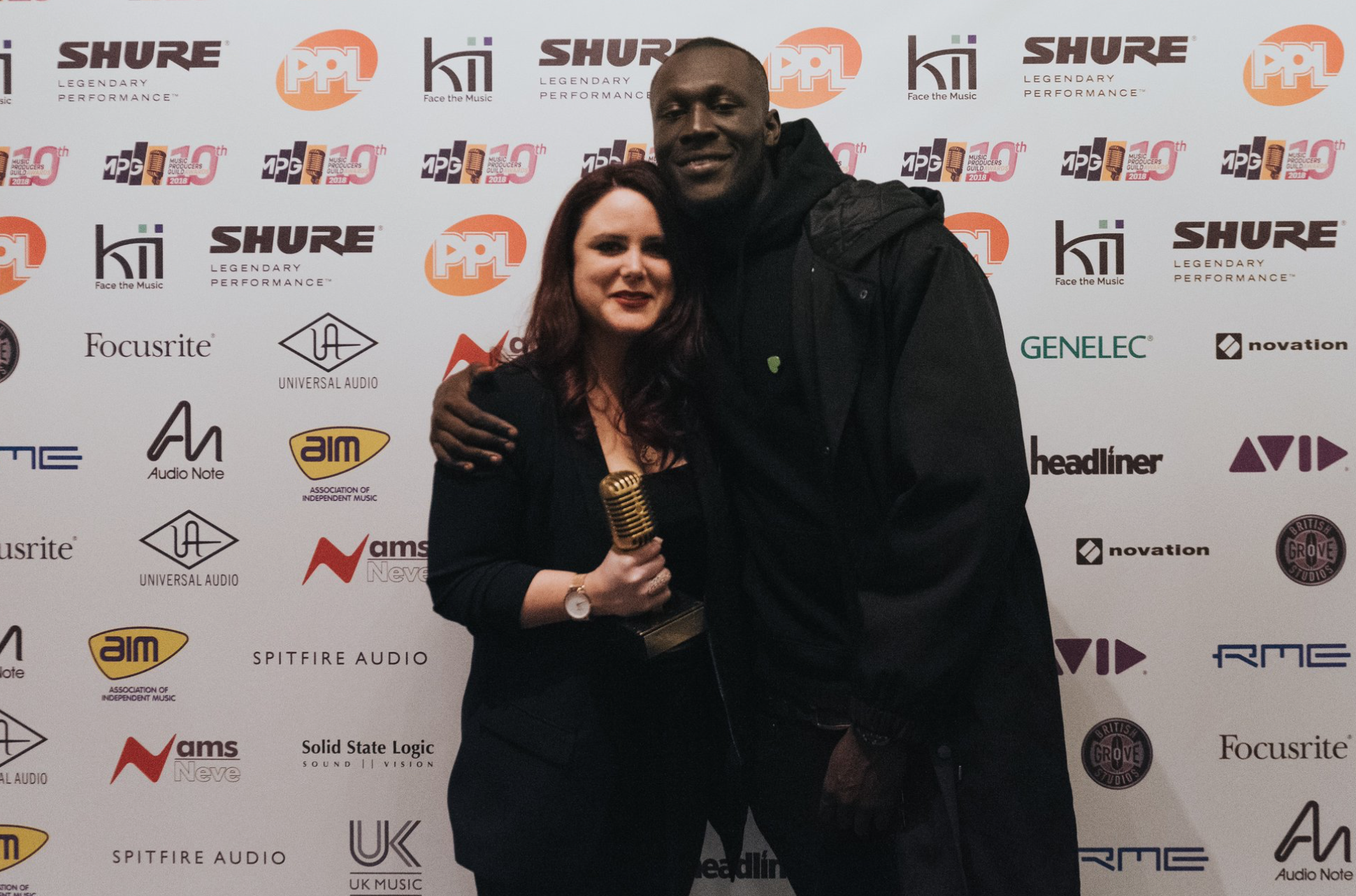 Stormzy drops by to present Manon Grandjean with her MPG Award.

This year, a quarter of the MPG Award nominees were women, which was a huge success, and a sign of things to come.

This year’s Inspiration Award went to Imogen Heap, not only an exceptional artist for the past two decades, but an innovator and inventor of Mycelia, a blockchain technology platform aiming to bring fairness and sustainability to the music industry, as well as the mi.mu gloves, that upon wearing them, enable the user to automate sounds and effects through movement. Imogen has also composed the score for JK Rowling's theatre production, Harry Potter and The Cursed Child, which will begin its journey on Broadway next month.

The MPG Award For Outstanding Contribution To UK Music presented by PPL went to Clive Langer and Alan Winstanley, the production duo who have worked on albums across a wide variety of artists: Morrissey, Madness, and Elvis Costello to name but a few.

Double BRIT-winner, Stormzy, made a guest appearance to give Manon Grandjean her award for winning Recording Engineer of the Year, having worked on his number one album, Gang Signs & Prayer.

Mark ‘Spike’ Stent won Mix Engineer of Year - the last 12 months alone saw him working with Justin Bieber, Muse, Ed Sheeran, Rita Ora, and Grimes; Self-Producing Artist Of The Year, sponsored by Spitfire Audio, went to Dave Bayley from the band Glass Animals; and Breakthrough Engineer Of The Year, sponsored by Genelec, went to Marta Salogni, who has engineered for The xx, Frank Ocean, and BRIT-nominee, Sampha.

As usual, the event went smoothly, with delicious food and drink, and there was a good turnout at the after-party that continued into the wee hours in the Grosvenor's Red Room. Thank you MPG, and see you again next year..!