Nathan Evans: Wellerman Of The Moment

Remember a time when Wellerman wasn’t stuck in your head? Me neither. And it’s all down to former postman, Nathan Evans...

Anyone with ears and a phone knows about the sea shanty phenomenon that has swept the globe in recent weeks. It all began when Nathan Evans from Airdrie, North Lanarkshire in Scotland, started uploading songs to TikTok after completing his morning duties as a postman. It turns out that just like us, there once was a time when Evans also didn’t know what a sea shanty was:

“I knew about the Drunken Sailor and I knew that was a thing, but it wasn't until July of last year when somebody left a comment on my TikTok saying they think I’d be good at covering Leave Her Johnny that I’d properly heard of sea shanties,” admits a gracious Evans on a Zoom call (I can only imagine the amount of times he’s had to retell his slingshot entrance into the public eye over the last few weeks).

The internet works in mysterious ways, and the rest is (very recent) history. Confirming that he is no longer a postman (which he’s relieved about given the UK’s recent freezing weather; “I’ve got about a foot of snow outside!”), Evans says that his former colleagues have been nothing but supportive of his recent internet stardom.

“It was funny, because I left my job on the Friday, and they didn't know that anything was happening until the Thursday,” he laughs. “When I told them, they were shocked. They were like, ‘what do you mean, you're leaving?’ But they think it’s amazing and they’re very supportive.”

As it turns out, Leave Her Johnny walked so Wellerman could run, and his first sea shanty video racked up eye watering numbers – and fast. Evans knew that he needed to give the people what they wanted: sea shanties. And when did they want them? Late December 2020, specifically.

By the time Evans uploaded a rendition of the New Zealand whaling ballad, Wellerman a few months later, he soon found himself at the centre of a new cultural movement whirling around sea shanties, inspiring many others to record their own sea shanties and to imitate and remix Evans' version. To date, he has amassed over 500,000 TikTok followers and Wellerman has racked up over eight million views – not to mention 1.6 billion videos use the hashtag #seashanty on TikTok.

Evans can remember the exact day he uploaded the song:

“I uploaded the video on December 27, and about three or four days later it passed a million views,” he recalls.

“The comments were still rolling in and the duets were coming in at around one every two seconds. It was crazy! You laugh about things that are viral, but I was like, ‘this is pretty much viral now!’ It's everywhere – everybody's singing it.”

It went from a TikTok to an actual song that was getting played on the radio in the space of four days.

And it wasn’t just singers with impressive baritones that were getting in on the TikTok action: Andrew Lloyd Webber, Jimmy Fallon, Brian May and Elon Musk have all taken a stab at their own ShantyTok, as it’s come to be known. Crossover viral stars, ‘Four Lads in Jeans’ (you’ve seen the meme) even did a version. It’s been overwhelming, to say the least:

“No words can describe how it all feels, it's absolutely insane,” he says in a way that you can tell that the extent of what has happened hasn’t truly hit him yet. “I just feel like I've been stuck in a tornado for four weeks now. But it's all good. I've had a song hit number one, and it’s still sitting at number two in the singles charts and in the official charts.”

Evans jokes that the fame hasn’t gone to his head yet, (he’s even been on Blue Peter – “I've got my badge that I've put on my guitar bag, so that's it, I've made it,”) although he has been recognised a few times in the supermarket – even with a mask and hat on. Perhaps his voice is a giveaway – his thick, Scottish accent being one of the things that audiences seem to really like about his TikTok videos.

“Aye definitely, I've seen in the comments that people are saying 'that accent is amazing; it fits so well with the song' – so I think the accent has a lot to do with it.” 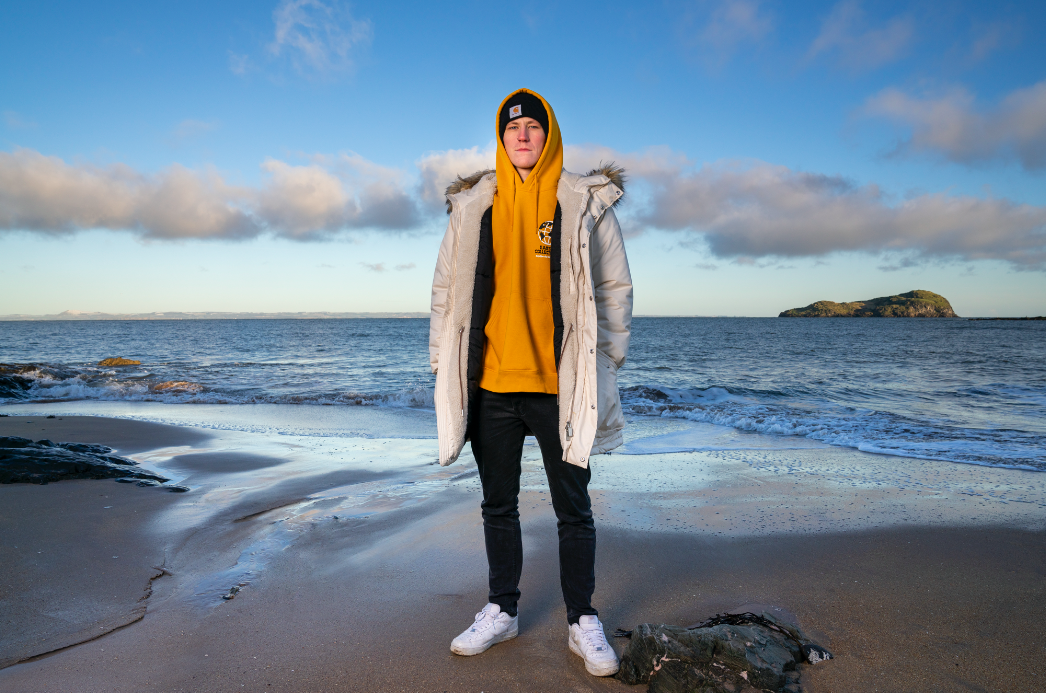 Evans quickly released Wellerman and Wellerman (220 KID x Billen Ted Remix) – the latter is still holding the number #2 position at the time of writing, which became a viral sensation of its own, exploding out of Instagram and receiving radio plays from Radio 1’s Scott Mills, Nick Grimshaw and Capital Dance’s Mistajam.

The remix idea started when 220 Kid remixed a 40 second clip of Wellerman for a laugh:

“He put it on his social media, and Scott Mills got in touch and said he needed it for the radio, and asked if we had a longer version. I was like, ‘eerr, I do not’.

Mistajam was the same – he jumped on it and whacked it on the radio as well, and asked for a longer version. So because of that, 220 Kid came to me and said, ‘right, what do you think about doing this properly? Let’s get the vocals down and we'll remix it and do it right’. Then I arranged a manager, a record deal, and I got everything sorted and we got it recorded properly. It went from a TikTok to an actual song that was getting played on the radio in the space of four days. It was crazy!”

On the history of sea shanties, (which were once commonly sung as a work song to accompany rhythmical labour on board large merchant sailing vessels), Evans says that the feeling of bringing people together resonates strongly today for obvious reasons:

“Back in the day when the shanties were sung, it was to bring everybody together, to keep them all in time and to keep the morale high. I think it’s not the actual meaning of the words of the song, [although anyone can feel free to bring me rum anytime], but it’s the effect the song has on people,” Evans considers, framing the song amidst the global pandemic.

“It puts a smile on people's faces. Everybody can clap along and sing along, and that is exactly what people are needing right now; they're needing a smile, they're needing that togetherness of having everybody around and singing along. People are looking to have something in common with people, and I think that song is exactly that.”

Off the back of the success of Wellerman, Evans has announced a UK and Ireland tour for 2021, kicking off in December in Dublin. He also shares that he’s just signed a multi release deal, and that he hopes to release a few more singles over the coming months.

“They might be sea shanty-esque, or they might be my own music, because I write my own music and sing my own songs. Then hopefully there will be an album by the end of the year as well. It’s been insane; it's like being stuck in a tornado with all this stuff flying around you, and I’m just like, ‘alright, this is my life!’” he shrugs, grinning.