Queen Cora is an inspiration. An incredible career has allowed her to perform drums at two Super Bowls, and toured with the likes of P!nk, Prince, and Beyoncé. As the house drummer for Beverly Bond’s annual Black Girls Rock Awards TV show on BET, she has performed with everyone from Jill Scott, Erykah Badu, India Arie, and H.E.R., to Mary J. Blige, Fantasia, and Yolanda Adams. She also owns a shipping container construction business, is an author, and has recently launched an international exchange program to empower young people in the arts and education.

“I did try and get in the band earlier on,” she recalls. “But there was some racial tension, so I didn’t really get the support I needed at that time. One of the councillors thought that I wasn’t going to keep up so if I would have joined the band in 8th grade, the director was going to put me in the 6th grade ensemble. That’s just not cool!

“I ended up doing some theatre work, and learning about productions, which became an opportunity; so I didn’t just sit in the corner and feel like, ‘oh I’m never going to be anything’. My grandparents and my parents didn’t teach us that way.”

As soon as she was given the opportunity, Queen Cora very quickly learned her craft.

“My band director in high school, William Portis, was very passionate about empowerment; and I learned very quickly from just naturally being competitive in other activities I was involved in, such as basketball, competitive diving, tennis, and chess. So by the time I got to playing the drums, keeping up with the kids that were more advanced just became another competitive challenge for me.”

She also joined the concert band, the jazz band, the percussion ensemble, and in her sophomore year, became the drumming section leader - the first female ever to do so.

“One thing I always say to young people - and to people in general – is that life is filled with upbeats and downbeats. It’s music. So, I did also have some downbeats in my life. My mother passed away a month before high school graduation, so it paved a different journey for me that I probably wouldn’t have anticipated, otherwise.”

And how did Queen Cora get into the industry itself?

“I had a few experiences,” she says. “I was definitely gigging by junior year; I was able to support myself fully, and live off campus, which was really good. It made my dad proud!”

It was in her senior year, whilst working at the Carter Baron Amphitheatre, that she met Sekou Bunch, the bass player who has recorded and performed with the likes of George Benson, Quincy Jones, and Michael Jackson. He and Rayford Griffen were performing with Patrice Rushen that evening, and Sekou came early for soundcheck.

“He just felt like there was something about me that was different, so he said, ‘I’ll give you my number, and whenever you come to LA, just call me, and let me know - I want to connect you with some people.’”

And call him she did. When she was next in LA, he put her in contact with numerous seasoned industry players.

“You know, when I would see my heroes in the drumming magazines, I would say, ‘one day I want to be like that!’ To actually connect with them was just excellent! I just felt like I was on the right path.” 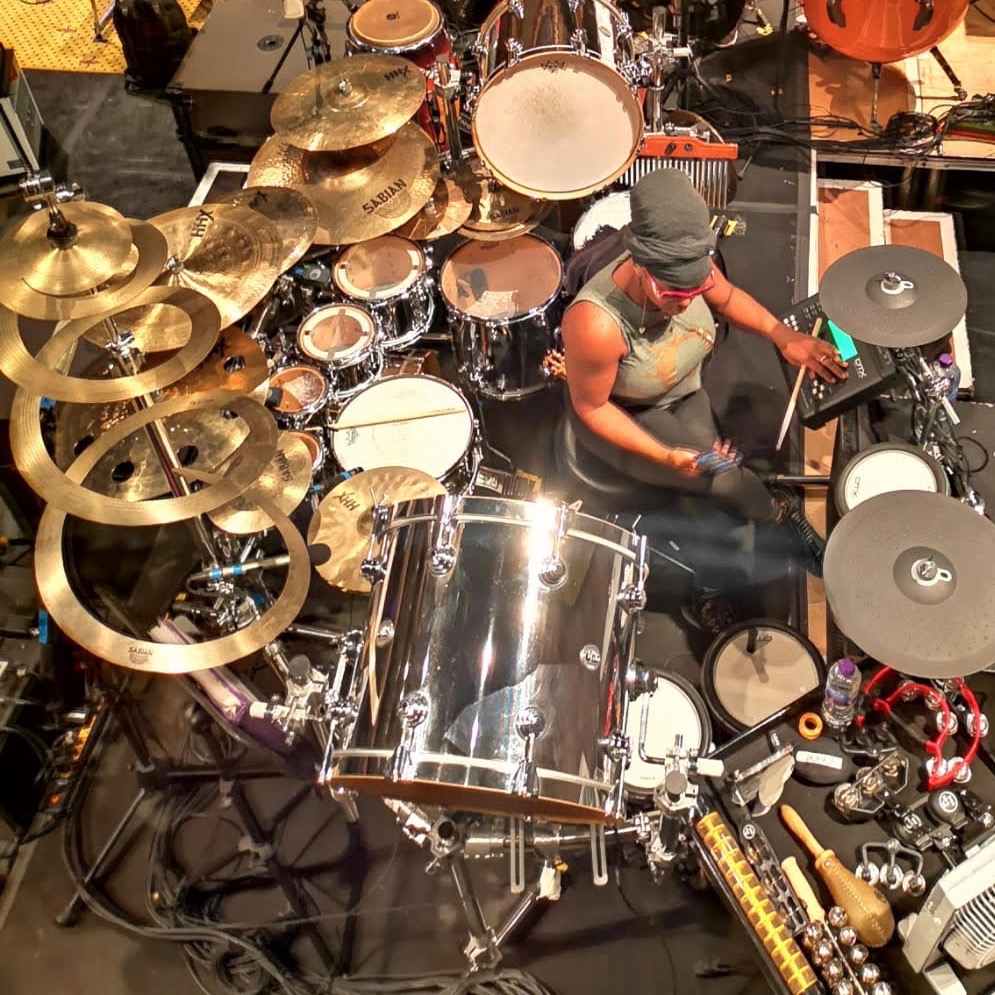 Beyoncé is at the top of all of her creative expressions without apology; that’s what I pulled from those experiences.

I was fascinated to find out what it was like to work with Prince and Beyoncé - both musical icons, and both known for championing women in the business.

“For me, particularly with Prince, he was an advocate for excellence - and that’s what I took away. Being the fullness of yourself, but taking the time to know what that is, and to then develop that, is a really big part of it. So, in some ways it’s about eligibility and equality, because you still have to have a work ethic. It’s nice to be female, but you still need to get the job done!

“If the door opens for you, as it did with Prince and Beyoncé, where they expressed interest in me working with them, then I had to be able to maintain their standard, especially considering those who came before me. I got there because I could handle the chair on which I sat; you have to be excellent. Beyoncé is a leader: she’s a boss, a business owner, and she’s a philanthropist; but in her craft, if you take all of that away, she’s excellent as a vocalist, she’s excellent as a performer, excellent as a dancer. She’s at the top of all of her creative expressions without apology, and that’s what I pulled from those experiences.

“Prince was very knowledgeable about engineering; he knew the sound that he wanted, he knew the lights he wanted, the choreography, the production, and then on the other side is what has been another inspiration from both of them: they know their business. When you understand the business of you, then it also keeps you from the place where you are having to do something rather than choosing to do something.”

Meeting and working with Prince happened in the most wonderful way for Queen Cora:

“He heard about me, and came to hear me play with a pianist/singer-songwriter, Frank McComb. I had already established myself in the industry by that point - Guitar Centre in the States used to host an annual national drum competition, and I won it in 2002! I won a car, and a bunch of drums, as well as the notoriety!

“So that inevitably increased my visibility nationally and, of course, I still kept playing. Prince came to a show I was doing in LA in a club called Level One on Wilshire Blvd and Crescent Heights. He and a friend of his, the amazing jazz vocalist, Rachelle Ferrell, came to hear me play. Raymond McKinley was the bassist then, and told me quietly while we were playing. It was so surreal! After the first set, his bodyguard came up to me, because Prince wanted to meet me. Chris Hart was there in the audience that night; everyone was blown away.

“So, on the break, I went to meet him, and we just talked about music, quality of content, and lyrics, and its importance - I remember he talked about Jill Scott being a great example of that. After the show, he had to leave, but his assistant, Ruth Arzate, came up and said he wanted to get all of my information, and to send me the drum set of my dreams. It was incredible!” 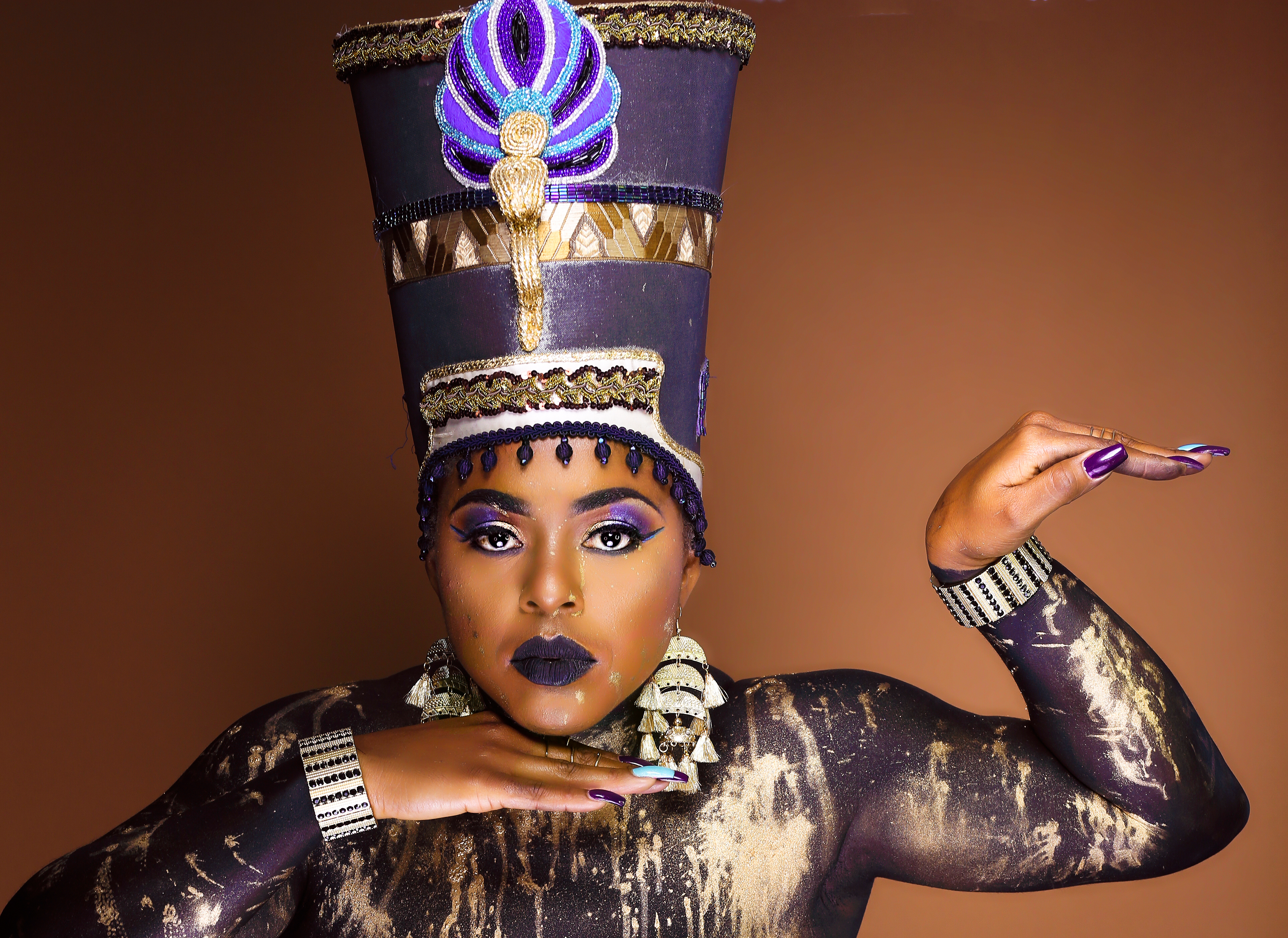 The cool thing about live music is that you get immediate inspiration.

“I was already endorsed with DW, so I asked for this seven-piece kit. It was spider pine red, and you could see the beautiful wood grains with a regal gold trim; it was just gorgeous,” she smiles. “At that time, it really was the best kit I’d ever had; and the fact that he gifted it to me was even more historical. Once I got the drums, I called him to let him know, and thanked him. He said I should come over and jam at the house, and to bring the drum set. So I did, and it was awesome just jamming in his living room!”

Queen Cora worked with Prince for the next five years thereafter.

“We live our lives for so many different reasons,” she reflects. “Beyoncé and Prince both had the most solid understanding of their vision for themselves, and their brand, that I have ever experienced. I have the same drive and desire to be excellent, and deliver each time. It’s like when I used to dive: the goal is to have an incredible performance, or dive and hit the water with as much finesse and as little splash as possible. It takes a lot of muscle memory, focus, and repetition; and I saw that same consistency and ethic in their expression. So, to those who don’t live life with that much intention, then it does seem hard, or unrealistic. The reality is, that’s what it takes to be on that level.”

We chat a little about the differences between a great live show, and a perfect studio session.

“The cool thing about live music is that you get immediate inspiration: you get reaction from the audience in the moment,” she says.

“But I love television and studio recording because I am a part of archived history. Each comes with its own personality, and reward; and they explore different sides of my playing, from the spontaneity of live performance, to the discipline and simplicity of studio recording.

“My recent kit design is called the 360 Degrees Cosmic Electro Acoustic. It’s comprised of DW acoustic, Yamaha electronics, Sabian, Remo, and Audio-Technica. The reason why I like this kit so much is because it represents all of the tones: very high rototoms, short rack and gong drums, plus electronics. And it’s like a spaceship! [laughs] It feels like artwork, and an adventure. DW has always been very supportive throughout my entire career.

“Sabian, Remo, and Yamaha are also a fixed part of my sound.What I love about them is that they offer versatility, regardless of whether I’m playing blues, funk, jazz, hip hop, or rock. The tone quality of the instruments allows me to have the versatility and quality that I want. Each environment, each element of the kit, and the results you want from the listener, begin at the drummer’s throne - and my companies greatly assist me in achieving that.”

Queen Cora suggests that music is an organised resonance of life, and of existence; it’s a poignant way to finish our conversation:

“Everything is frequency, everything is vibration, that at a particular speed, becomes tone, or light, or colour. So everything is music, and music is everything. It is really only based on how fast or slow the frequencies are moving, to determine how we identify it. It’s all a rhythm. Music is important, and allows us to process the world and universe around us. It allows us to express our feelings through that journey of life in different ways, that are sometimes stronger and more articulate than we can communicate verbally. Music is a lifeline.”