American music producer and engineer, Sterling Winfield is a go-to guy in the hard rock music scene for his heavy sounds, which traces back to the early ‘90s when he first worked with Pantera. He shares his top production tricks and explains why Waves plugins help him rock on.

You’ve said before that heavy metal and hard rock music is not just a wall of sound and that there’s actually a lot of intricacies to that style of music; would people be surprised to learn about what goes on behind the scenes when creating music like this?

I would think they would be hugely surprised how intricate it is and how bad ass some of these musicians really are! I think heavy metal musicians are some of the finest in the world, period. They are incredible musicians and the amount of practice and work that goes into playing some of this music is insane.

So for some people to turn their nose up at it and dismiss it as noise, I think is uninformed and pretty ignorant, actually. I think they would be really, really surprised at the musicianship that some of these dudes have.

Yeah, we're a little cuckoo, we're a little crazy, but I don't know an artist that isn't, you know? They are some incredible musicians and a lot of them are amazing human beings and not at all what you think they would be like.

When I’m working with King Diamond everybody's like, ‘does he come in the studio with his makeup on? I bet he comes in there, lights candles and is worshipping the devil’ [laughs]. I'm like, ‘no, he's the sweetest man in the world’. He's so cool – such a nice guy.

I know that people only see the surface. These are salt of the earth, grounded human beings. 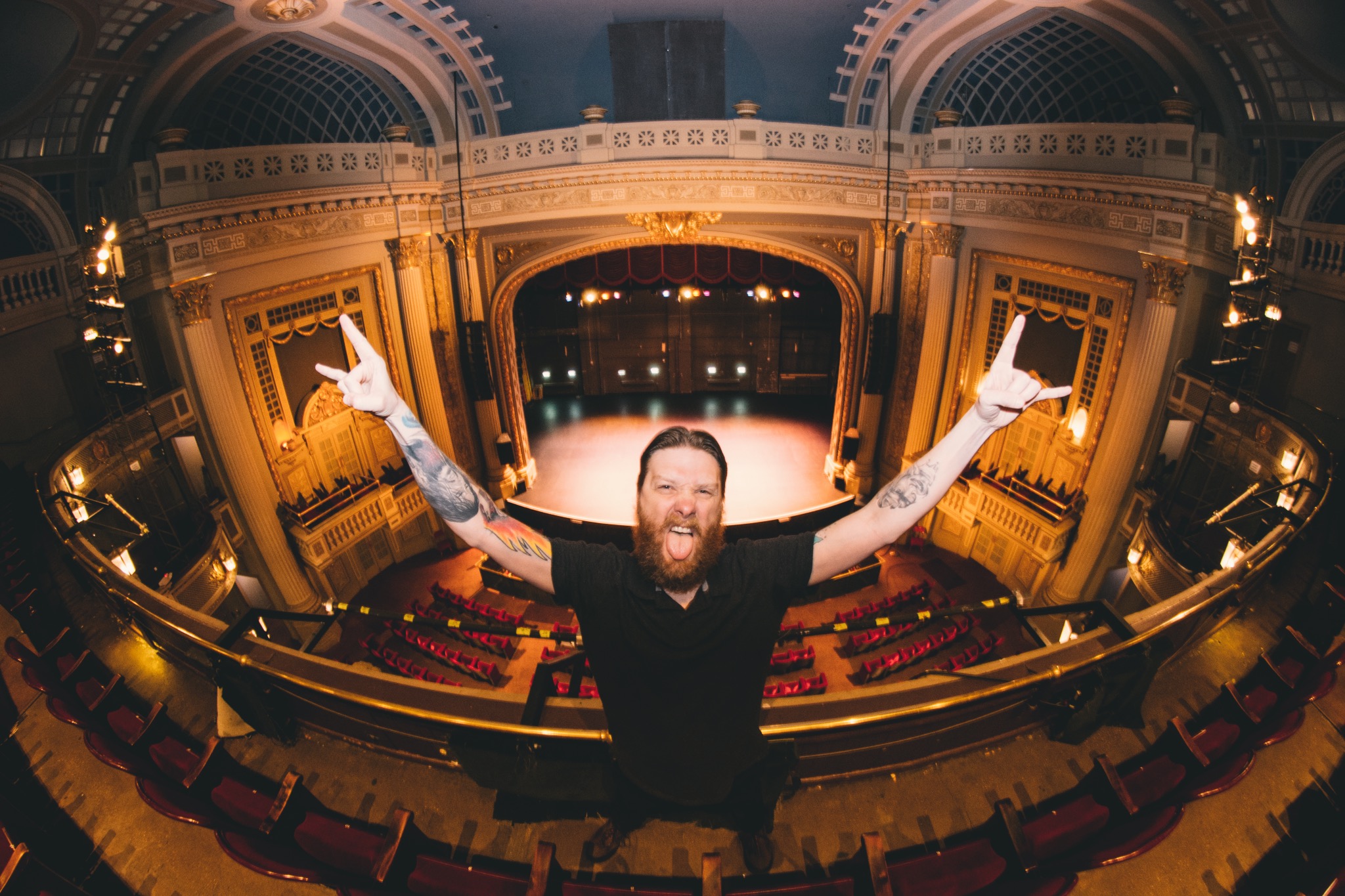 You’ve been using Waves plugins for about 15 years and use them on every project; why are they so well suited for the heavy rhythmic sounds you work on?

When I reach for a Waves plugin, it's me not worrying about what it's going to do to something, or if it's going to butcher it, or if I'm going to sit there and mess around with the sound on something for 20 minutes before I figure it out.

With Waves, I will hear a sound, like say somebody sends me a guitar or a vocal or whatever, and I'll go, ‘I know immediately what I want to do with this’. 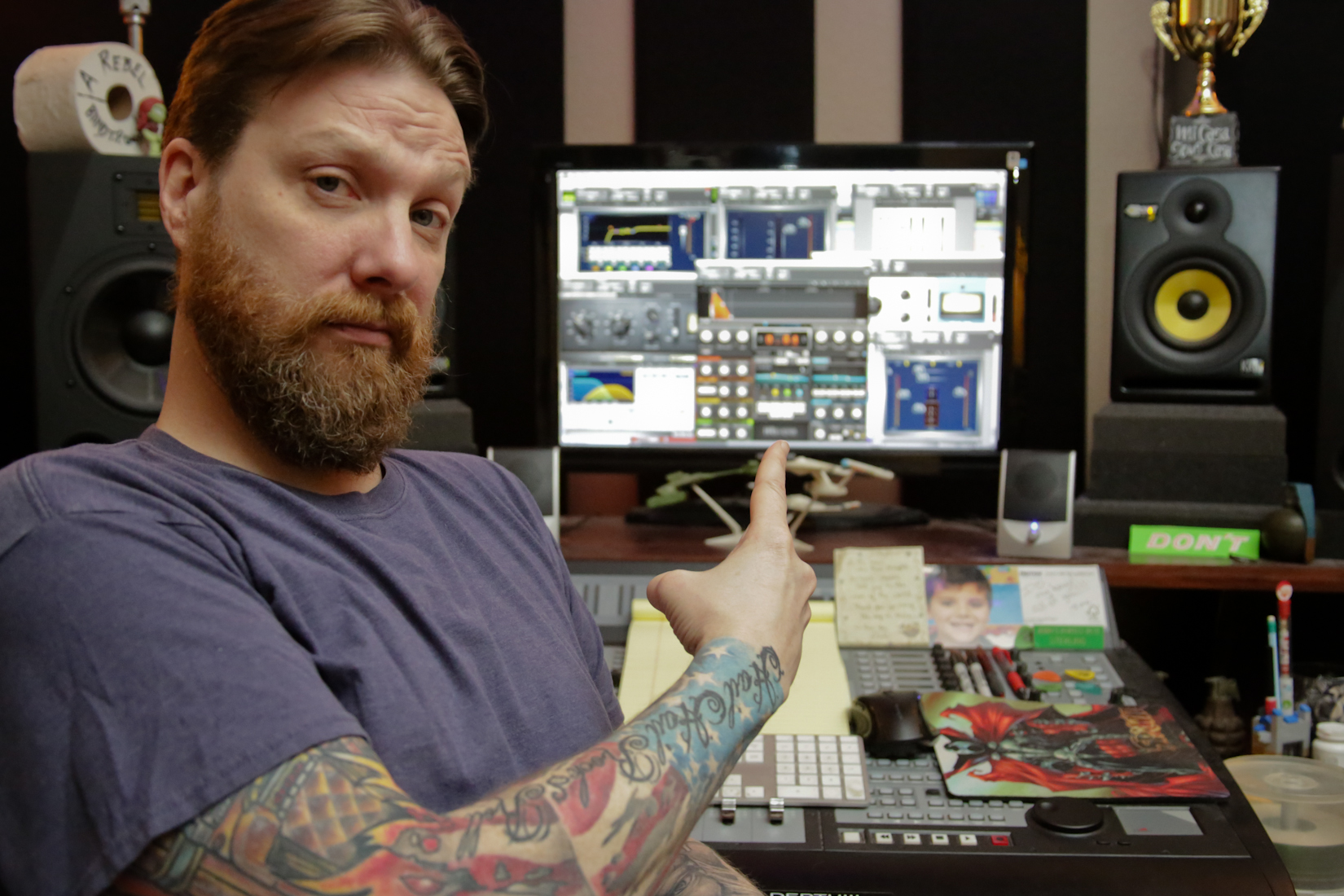 I think heavy metal musicians are some of the finest in the world, period.

How are you using the StudioRack plugin chainer to stack everything and do a lot of parallel processing within one plugin?

I’ve got a signal chain that I have saved with Waves, especially with their new StudioRack. I love that thing because you can stack all these plugins in one plugin and just put it on there and it's done, and I love that!

It's easy and it's a really good place for me to start and then tweak later. I'm doing that especially with vocals. I like to do several things there where I'll have several compressors on one vocal, and then I'll have one that's off to the side on a parallel thing where I can turn the volume up and down and not have it affect the original clean vocal, but I'll have a little distortion on it to smooth it out.

Or I give a little bit of really, really high end EQ just to give it that air on top and just to have that parallel thing on the side. I use a lot of parallel compression on drums – all of my parallel drum stuff is Waves stuff.

This is along with a little bit of limiter and a little bit of EQ, just to brighten the whole kit up. That is paramount to my drum sounds that I get, because I like big, huge drums that fill up everything and that cut through and that you can feel – that's that's huge for me. 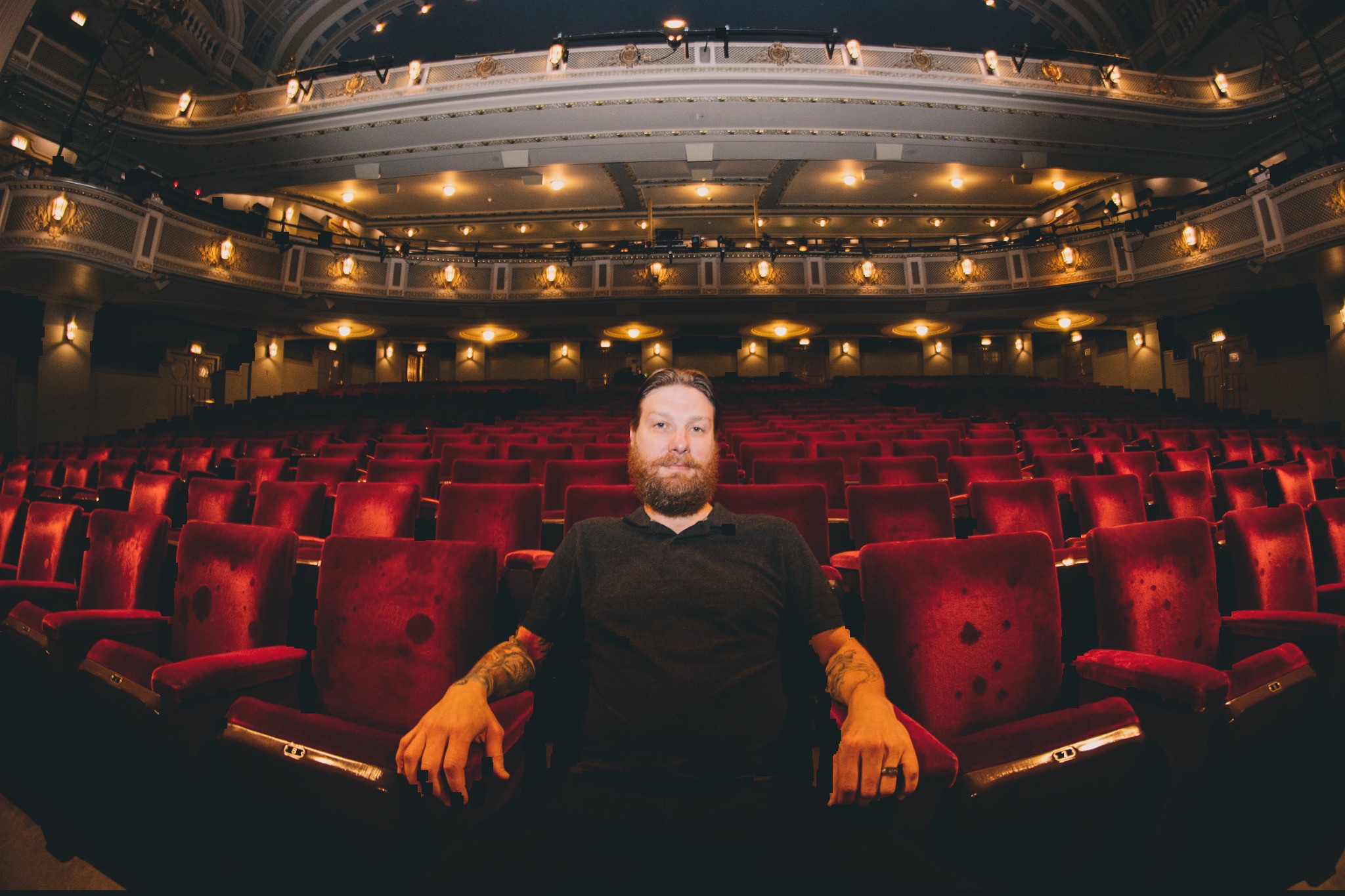 One of the things you get asked most about is mixing drums as people tend to find it quite tricky; what Waves plugins are you using to get this mix right?

Drums are pretty much the foundation of rock, hard rock and heavy metal. I think it was Jerry Gaskill from King's X who said, ‘if you've got a shitty drummer, you got a shitty band’. That's kind of where I'm at with it: you've got to make those drums speak, and they have to be one of the big focal points of any mix.

Whether they're loud in the mix or not, they need to be heard and felt. That being said, I am a huge fan of really severe compression on drums, especially on room mics and things that create space and depth.

I really love the SSL compression on that; I love cramming room mics into the CLA-76 as hard as it'll go just to get that really nasty, gritty sound – you know that it's not the feature, but it's that glue that holds it all together.

For kicks, snares and toms and stuff like that I really rely on the Renaissance Channel Strip; I use that on kick snare and on the toms to really get them to speak, and I do a lot of that in line with some of their transient stuff.

I'm really impressed with some of the newer things that Waves has too, like the Infected Mushroom Pusher, which is really, really good at shaping transients on drums, especially toms – I love that thing! It's crazy. And believe it or not, it's killer on guitar too and on distorted guitars when using it as what we call a clipper. 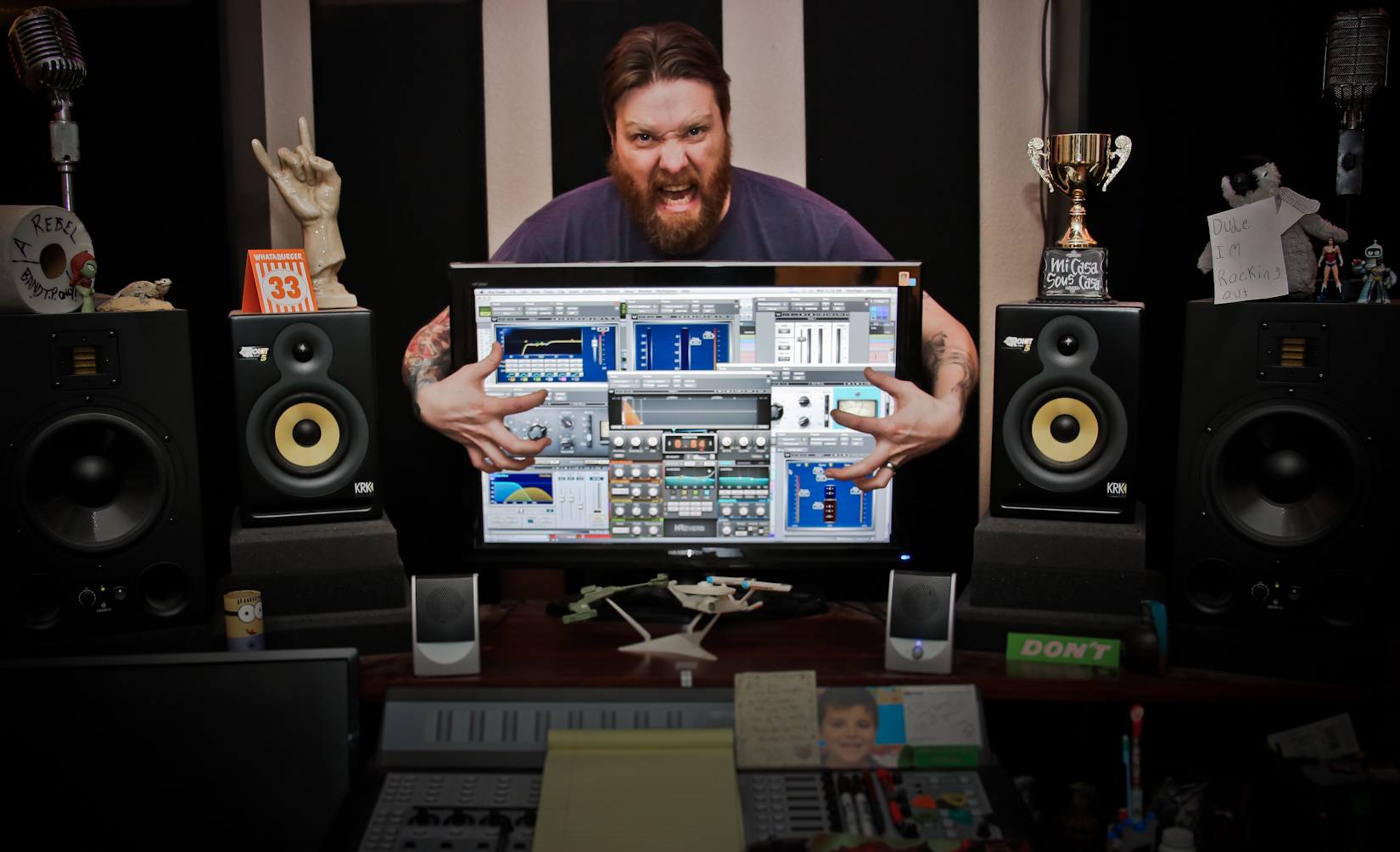 When you get a vocal track from most people – and I say this with a wide, general, very broad brushstroke here – they don't have a $20,000 Telefunken mic going into a $10,000 vintage Fairchild limiter, going through a $300,000 Neve console that The Beatles worked on.

No one has that. Most people have a run of the mill condenser mic going through a decent channel strip, and their whole signal chain probably costs about 500 bucks. That's the reality of bedroom-recording. So what you're dealing with is a signal that is usually covered-sounding; it's kind of bloated in that low-mid area, and it's still kind of stuffy-feeling.

So when you get that track, it's flat and there isn’t a whole lot of treatment done to it. So to me, untreated, it sounds like whoever is singing has a mouthful of mashed potatoes. So I'm using the EQ and the compression to suck all that mashed potato out of there and get rid of it. It clears the way so that I can tighten it up with some some nice EQ on top and some compression.

As I'm giving that EQ on top, it tends to really accent those ‘s’’ and ‘ts' and stuff. So I'll just put a little light DeEsser on the back side. So that's where that ‘no mashed potato’ came from – it’s just a humorous look at what I usually receive when I download stuff into my DAW.

I love cramming room mics into the CLA-76 as hard as it'll go just to get that really nasty, gritty sound.

How have you been experimenting with Waves’ OVox Vocal ReSynthesis plugin?

Well, there's not a lot of call for it in the music that I work with – it's really kind of an EDM thing. It’s lots of cool vocal vocoder stuff and robotic stuff, but I've snuck it into some people's mixes – I'm not going to tell you who, but they don't know it's there.

But it's there. It's a really, really cool toy to throw things through – even drums. I've got some really weird drum sounds with this thing. I love it, it's a really fun toy to just go through the presets.

I guarantee you can find something on this thing that will make you laugh, but at the same time, you'll go, ‘Whoa, this is actually pretty cool! I bet I can sneak this in here’. So that's what I've been doing.