Taylor Swift To Rerecord Back Catalogue To Outmanoeuvre Scooter Braun

Taylor Swift plans to rerecord her back catalogue in order to regain control of her previous recorded work. This follows Swift’s former label, Big Machine Label Group selling her entire back catalogue (comprising her 2006 debut album through to 2017’s Reputation) to Scooter Braun’s Ithaca Holdings as part of a reported $300 million deal.

UPDATE: Swift is due to perform at the AMAs and be named Artist of the Decade this month, where she had been planning to perform a medley of her hits.

However in a lengthy social media post which the singer captioned "Don't know what else to do," she explained that music managers Scooter Braun and Scott Borchetta will not let her perform songs from her past albums, which they now own the rights to.

According to Swift, both men are blocking her from performing her old songs on television, citing that this would count as her re-recording them before she is legally allowed to next year.

"Right now my performance at the AMAs, the Netflix documentary and any other recorded events I am planning to play until November 2020 are a question mark," Swift said.

"The message being sent to me is very clear. Basically, be a good little girl and shut up. Or you'll be punished. This is WRONG. Neither of these men had a hand in the writing of these songs.”

Fans and singers responded instantly, with the hashtags #IStandWithTaylor and #FreeTaylor trending on Twitter.

“I’ve tried to work this out privately through my team but have not been able to resolve anything,” Swift continued. “I feel very strongly that sharing what is happening to me could change the awareness level for other artists and potentially help them avoid a similar fate. “I just want to perform MY OWN music. That’s it.”

Big Machine Label Group responded to Swift's comments today, saying that "the narrative you have created does not exist."

The statement read: "As Taylor Swift’s partner for over a decade, we were shocked to see her tumblr statements yesterday based on false information. At no point did we say Taylor could not perform on the AMAs or block her Netflix special. In fact, we do not have the right to keep her from performing live anywhere. Since Taylor’s decision to leave Big Machine last fall, we have continued to honour all of her requests to license her catalog to third parties as she promotes her current record in which we do not financially participate.

The truth is, Taylor has admitted to contractually owing millions of dollars and multiple assets to our company, which is responsible for 120 hardworking employees who helped build her career. We have worked diligently to have a conversation about these matters with Taylor and her team to productively move forward. We started to see progress over the past two weeks and were optimistic as recently as yesterday that this may get resolved.

However, despite our persistent efforts to find a private and mutually satisfactory solution, Taylor made a unilateral decision last night to enlist her fanbase in a calculated manner that greatly affects the safety of our employees and their families.

Taylor, the narrative you have created does not exist. All we ask is to have a direct and honest conversation. When that happens, you will see there is nothing but respect, kindness and support waiting for you on the other side. To date, not one of the invitations to speak with us and work through this has been accepted. Rumors fester in the absence of communication. Let’s not have that continue here. We share the collective goal of giving your fans the entertainment they both want and deserve."

Swift first spoke out against the decision in a Tumblr post following the news, detailing the “incessant, manipulative bullying” she received at Braun’s hands for years, and how he had “stripped [her] of [her] life’s work”.

During an interview with CBS Sunday Morning, Swift confirmed that she will be rerecording her older work: “Yeah. That's true and it's something that I'm very excited about doing because my contract says that starting November 2020 I can record albums one-through-five all over again. I'm very excited about it because I think that artists deserve to own their own work; I feel very passionately about it."

Fellow singer-songwriters and performers showed their support for Swift when the news first broke:

Rapper, Iggy Azalea Tweeted: “Telling someone about a deal days before it’s public means the deal was already done & she never had the opportunity to even make a bid to own her own work. These deals take months to negotiate in long form. They really do ppl crazy dirty on ownership of their intellectual property in the biz.”

Meanwhile, singer, Halsey posted: "Taylor Swift is a huge reason why I always insisted to write my own music. I believed if she did it (in a way that made my teeth ache like cold water and my heart swell and my eyes leak) than I should too. Cause that's how to make someone feel. To drag it from the pits of your heart. To offer it on a platter and say 'take some but take kindly.' She deserves to own the painstaking labor of her heart."

Singer Kelly Clarkson actually suggested Swift rerecord her music: “Just a thought, U should go in & re-record all the songs that U don’t own the masters on exactly how U did them but put brand new art & some kind of incentive so fans will no longer buy the old versions. I’d buy all of the new versions just to prove a point.”

When the news first broke, Swift posted the following statement to Tumblr:

“For years I asked, pleaded for a chance to own my work. Instead I was given an opportunity to sign back up to Big Machine Records and ‘earn’ one album back at a time, one for every new one I turned in. I walked away because I knew once I signed that contract, Scott Borchetta would sell the label, thereby selling me and my future. I had to make the excruciating choice to leave behind my past. Music I wrote on my bedroom floor and videos I dreamed up and paid for from the money I earned playing in bars, then clubs, then arenas, then stadiums.

Some fun facts about today’s news: I learned about Scooter Braun’s purchase of my masters as it was announced to the world. All I could think about was the incessant, manipulative bullying I’ve received at his hands for years.

This is my worst case scenario. This is what happens when you sign a deal at fifteen to someone for whom the term ‘loyalty’ is clearly just a contractual concept. And when that man says ‘Music has value’, he means its value is beholden to men who had no part in creating it.

When I left my masters in Scott’s hands, I made peace with the fact that eventually he would sell them. Never in my worst nightmares did I imagine the buyer would be Scooter. Any time Scott Borchetta has heard the words ‘Scooter Braun’ escape my lips, it was when I was either crying or trying not to. He knew what he was doing; they both did. Controlling a woman who didn’t want to be associated with them. In perpetuity. That means forever.

Thankfully, I am now signed to a label that believes I should own anything I create. Thankfully, I left my past in Scott’s hands and not my future. And hopefully, young artists or kids with musical dreams will read this and learn about how to better protect themselves in a negotiation. You deserve to own the art you make.
I will always be proud of my past work. But for a healthier option, Lover will be out August 23.

Sad and grossed out,

Swift’s fans have taken to Twitter to express their glee regarding the singer’s decision to rerecord her work.

Standby for the memes… 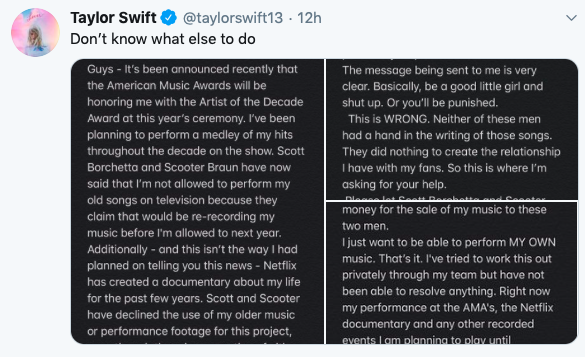