The Midnight have got love for you if you were born in the ‘80s. But even if you weren't, there’s more than enough nostalgia to go around.

There is a Japanese term: Mono no aware. In short, it encapsulates the sad beauty of seeing time pass – the aching awareness of impermanence. These are the days that we will return to one day in the future, only in memories.

For L.A-based band, The Midnight, capturing the essence of a gentle wistfulness and a nostalgia for the past has taken the form of a body of work of modern-sounding synth wave music, which has seen the duo grow an online cult fascination to a legion of dedicated fans over the short space of a few years. And the ‘80s pastiche doesn’t just apply to their music: take a glance at their Instagram account and it’s all neon pinks and blues, retro fonts, classic arcade games, floppy discs, cassette tapes and old school Nintendos – basically it’s everything from your childhood bedroom.

Making up The Midnight are Tyler Lyle (a songwriter from the Deep South) and Tim McEwan (a producer from Denmark), who join Headliner on a call from their homes in Atlanta and L.A, respectively.

On the lockdown period, McEwan jokes that he has become even closer to his dog – “my best and only friend” – while both are in firm agreement that this year has been “a real bummer” given that they had a big tour cancelled, although they’ve used the time to hunker down and get creative by embracing their new long distance relationship, as well as finding the time go down some “modular synthesis rabbit holes”.

Meeting in L.A on a co-writing session, the pair were put together by the people that ran their publishing companies. McEwan was under a publishing and production deal, while Lyle had been working as a professional songwriter for six years already – a period of his life that he fondly refers to as the “sadness and deprivation tour”. They’ve been working together ever since.

“After our meeting, I kept emailing Tyler and hounding him. I wouldn't leave him alone, and he still still hasn't got rid of me!” laughs McEwan, who explains that although he has an extensive background of producing and writing for other artists, he never hoped to be a touring artist himself:

“When I met Tyler, we connected musically. We come from such different places, and yet he was familiar in many ways. It was a nice outlet to create this little sandbox that we could play in and feel creatively free to do all kinds of things. For me, it was an outlet to do all the things I couldn't do when I was writing for top 40 radio.” 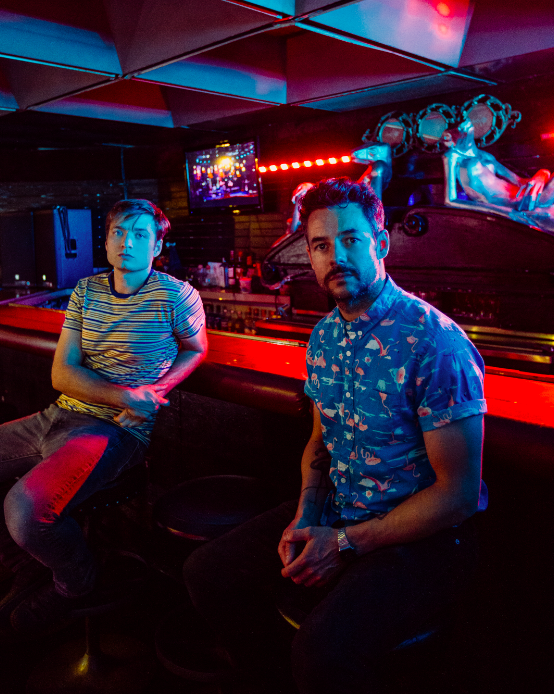 Their pastiche of ‘80s synth wave music is synonymous with their sound, which in part can be attributed to McEwan’s upbringing in the ‘80s, whereas Lyle used to call himself a “Nashville writer,” and is more inspired by pop music from the ‘60s and '70s, admitting that it was “a stretch” to fit his songwriting style into this world of retro-sounding music.

The resurgence in ‘80s nostalgia has picked up with the speed of a modified DeLorean in the last few years, with high profile Netflix shows like Stranger Things, GLOW and Black Mirror (Bandersnatch, San Junipero), and blockbuster films like It proving to be a big hit with audiences – while artists like The Weekend and Dua Lipa have fully embraced the synth and sax-driven sounds of everyone’s favourite mullet-sporting artists.

“Exactly,” agrees Lyle. “I think for millennial culture, it was what was on the radio when they were kids – when they were too young to really recognize what was going on. For me, there’s a sound of comfort and a womb-like consciousness to it. Our project is nostalgia, it's not necessarily the ‘80s sound we're trying to perfectly emulate. We're more focused with the idea of time passing and how we orient ourselves to a past that used to be. This resurgence of ‘80s music gets you asking questions like ‘who were we? Where did we start?’ We’re trying to get back to our origins.”

McEwan is on the same page, and notes that the digital world that we now live in has a big part to play in harking back to a simpler, and to some – a more novel time: when phones were huge, cars were angular and video games were pixelated.

“Exactly!’ says McEwan. “In the last 10 years with the growth of social media, everything seems to be not quite as tactile. There's something very tactile about having a cassette tape or a turntable, a vinyl, or a VHS player – there's something that you can touch, hold and collect. I think that's why analogue photography is having a huge resurgence: it’s not a file, it exists in the real world. I think we all need that to a certain extent, and the ‘70s, ‘80s and ‘90s represent that time.

"I think even for people that weren't born in the ‘80s, they kind of find themselves yearning for something. I think it speaks to almost a more lived in user experience, for lack of a better phrase. There was an optimism in the ‘80s that I think we sorely need at this time.”

“And not to get too literary, but Proust says: basically the only truth that exists is to return to a room that you haven't been into in many years; that feeling that happens to you...there's something powerful there. There’s something emotive in terms of that time-space difference with our past and our memories,” adds Lyle.

“It seems like a path that could take a lifetime to explore. It's the poignancy of having gone on the journey and then looking back from the end. It feels like a powerful, resonant place to create art from.”

“We’re creating art and entertainment and are trying to make you feel something,” McEwan agrees. “It's about creating the feeling – synth wave isn't really how the ‘80s sounded, it's how we wish the ‘80s sounded, and it's how we remember them sounding. There's a separation there and I think that's totally fine. It's all about invoking a feeling.” 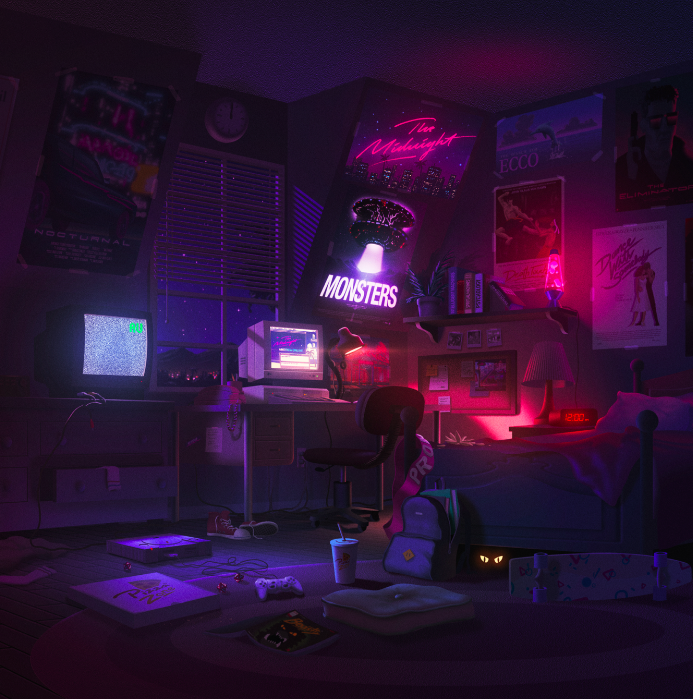 Following on from The Midnight’s 2018 album, Kids, their new album, Monsters explores teenage emotions through nostalgic touchstones, taking inspiration from everything from world music to Ecco the Dolphin.

McEwan can’t help but see the irony in the album’s artwork (designed before the pandemic), which would turn out to be a sight most people would likely come to be very familiar with over the lockdown period:

“The artwork for the album is a bedroom, and it looks exactly like what would be a quarantine bedroom, where someone is basically living in there. [Headliner makes a mental note to put the pizza box into the recycling right after the interview]. The album is about themes like isolation, connection, being a teenager and trying to find out who you are.

"You're basically exploring yourself through video games, music and your friends, and are hanging out in your bedroom instead of hanging out with your parents. So it was quite weird to step back and go, ‘whoa! We're in the middle of a worldwide pandemic with people quarantining, and this looks exactly like my bedroom right now’. On a deeper level, maybe there was something that resonated with people once the album came out and people saw the artwork, because I think the visual side is a big component of this universe that we've created. I think it struck a nerve in that way.”

On Monsters, The Midnight deliberately didn’t want to be beholden to a strict ‘80s sound, so also took a lot of inspiration from the ‘90s to give a sense of a larger sonic universe.

“I think there's a tendency with all genres to be bubbled into this chamber of one specific genre, and I felt it was important for us to move forward and to have the ability to move freely,” McEwan points out.

The track Brooklyn is a particular favourite for both Lyle and McEwan. One of Lyle’s most personal tracks, he wrote it during a particularly unhappy time in New York:

“I was living in this in this huge tower with glass walls, and at night you would see New York lit up like a chandelier,” he recalls. “But it was a very lonely and searching time. I had just got married, and my wife and I were deeply unhappy in New York. That song was a question to the city itself as to whether the time there would be good or bad...whether we'd fall apart.”