I start my interview with The Midnight Beast by confessing I wasn’t a fan the first time I saw their YouTube parody of Kesha’s Tik Tok, but a few months later I ended up binge watching all their videos and being won over. I’m at Stefan Abingdon’s flat in South West London, along with Ashley ‘Ash’ Horne and Andrew ‘Dru’ Wakely, who complete the trio. To my relief, all three laugh it off: “It does start with hate for a lot of people”, says Ash.

For those who aren’t familiar, The Midnight Beast (TMB) are, in their own words, “the greatest unsigned gimmick-rap band from South West London”, who delight in making pastiches of popular culture. They were one of the very first musical acts to find viral success, when their 2009 Tik Tok parody spread like wildfire, with MTV and Perez Hilton both featuring the video on their websites. Several parodies and original songs later, TMB were soon touring the UK, and were eventually commissioned to write and star in their own sitcom on Channel 4, spawning two seasons.

Ash and Stefan met at school, the latter meeting Dru at a theatre group. Dru tells me they formed the band organically from hanging out, playing Xbox, listening to the same music, and watching shows like Jackass and The Office together.

“We’ve always been keen to not get too hung up on the comedy element of The Midnight Beast,” Stefan says, “because that was a very accidental thing; it was just us making each other laugh, and then suddenly we’re sharing the bill with Jimmy Carr and Bo Turnham.”

I’m keen to find out how that fateful parody came to fruition...

“I was writing for other pop artists at the time, without much success,” Stefan explains. “And in one of the writing sessions, some of the producers played me Tik Tok by Kesha. So I rushed home, and on the train I wrote a little concept, which I showed to Ash and Dru. We actually already had Ninjas Of The Dancefloor in the bag. But we thought people might just think that we were a second-rate Lonely Island! And then one day, the morning after a friend’s party, when the three of us were still half-asleep and half-drunk, we just made the video. Ash did some choreography, it was all very silly — just at my parents' house.”

Knowing both Stefan and Dru were trying out different bands and DJing at the time, Ash meanwhile pursuing acting with bit parts in Eastenders and Doctor Who — I put forward the idea that it’s sort of perfect, in the way TMB incorporates all of the collective pool of skills they bring.

“Definitely,” Stefan says. “It was insane that we found something that enabled us to do music, comedy, acting, choreography, and editing, all under one roof.”

He also admits that he almost cancelled the video upload because his Internet connection was so slow at the time, and that each of them were starting to think about getting a ‘normal’ day job after their weary experiences of the performing arts industry — there does seem to be some element of fate to it all. 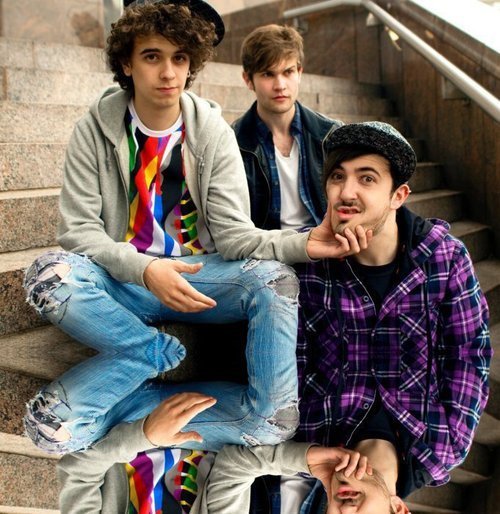 We met Taylor Swift didn't we? Oh no, that was Katy Perry...

Aware that Kesha acknowledged the parody with a tweet saying: “holy shit, this is better than my version”, I ask if Taylor Swift ever tipped her hat to another parody of theirs, titled Taylor Swift. It’s a hilarious romp which has a chorus worthy of any Swift has written herself. Sadly not, in this case.

“We met Taylor Swift, didn’t we?” Ash asks. “Did we?!” Dru and Stefan both respond quickly. “Oh no, that was Katy Perry,” Ash remembers.

I’m very interested in Stefan referring to the band as ‘characters’ during their creative process, which the three of them agree is a “mental tangent of randomness.”

“I mean, they definitely are characters,” Ash says. “Even girls I’ve been on dates with think I’m going to be my character, and end up being disappointed. I’m actually very sensitive — I cry myself to sleep [laughs].”

As their YouTube channel grew to 30 original songs and parodies, TMB were approached by Channel 4 with the prospect of writing and starring in their own musical sitcom. Now knowing they primarily see themselves as a music act, I ask what kind of a challenge this presented them.

“We felt out of our depth at first,” Stefan admits. “The trick was finding what The Midnight Beast would do in a sitcom,” adds Dru. “We wanted to make something a bit like Flight Of The Conchords, sort of in and out of a sitcom that would go into music video mode. By the second season we’d found our feet with it.”

I ask the guys about their side projects — Stefan is signed to Warner Chappell as a songwriter (he wrote a song for Selena Gomez a few years back), and Dru is also producing for other artists. Most intriguingly, I discover Ash has something of a Robin Williams side to his character; he really isn’t just the relentlessly chirpy character you see in the TV show and music videos.

“I’ve been really inspired by Charlie Brooker’s Black Mirror and stuff by David Fincher — the darker side of TV,” Ash reveals. “I’ve been writing something called 27, about two guys in a quarter-life crisis. Like we all go through; the depression of it, and trying to find a light hearted way of doing that. I’m also writing a short film, again about depression, which is something that means a lot to me — voicing the anxiety a lot of people are suffering from but are too scared to talk about.”

To the right of Stefan’s living room is his studio set up, so it would be rude to not take a look.

“Me and Dru have pretty similar set ups; we both use Logic Pro X,” Stefan says. “We use a bunch of plugins from Native Instruments, Razor, Soundtoys, Izotope, and Stef has a range of synths he’s been manically collecting,” Dru adds. “Our interface is an Edirol FA66,” Stefan says. “I like it because it’s got four ins and four outs, and it means I can have my patch bay hooked up to it, and I can go out to reverbs or guitar pedals, synth filters and stuff. We have the same microphone, an sE 220a. It’s an affordable mic which we’ve had since 2009.” “We've done two albums with it," Dru says. “It’s amazing, if you chuck the right plugins on it, it’s so flexible."

2017 is shaping up nicely for these likely lads — they’re now focusing their energy on their first stage musical, entitled All Killer, which will be premiering at this year’s Edinburgh Fringe Festival in August. And where would they like to see this crazy project of theirs in five years time?

“We never expected to have an album, and we’ve had two,” Stefan says. “Definitely didn’t expect to have a TV series, and we’ve had two! So why shouldn’t we aim for a film? A West End show would be amazing, too! We’re just keen on the more the merrier, to be honest.”

For more information on The Midnight Beast, CLICK HERE