How to Make Vocals Sit in the Mix - Context is Key!

Making vocals sit in the mix is essential if you want your recordings to sound polished and professional—especially if you're recording vocals at home.

It's one thing to capture the perfect take, but getting them to sit well within the context of a complete track is an entirely different skill.

Assuming you've captured a stellar performance, there are many techniques available at your disposal to help make vocals sit in the mix and sound like they belong to the track.

Using the techniques in this guide, you'll quickly understand how to mix good vocals that sit up front and blend in perfectly.

Making Vocals Sit in The Mix

If you listen to any good recording, you'll notice that the vocals usually fit perfectly within the rest of the arrangement.

The lyrics are intelligible, the dynamics are even, and everything sits in harmony; the sum is greater than the individual parts.

Reference tracks during mixdown are your friend here. These are a godsend when you're trying to see how your productions stack up against other commercial material.

Find a track with a similar vibe or sound and load it into a blank track in your DAW. Switching back and forth periodically as you go will give you perspective on how your mix is taking shape.

How to Make Room for Vocals in a Mix

So what can prevent vocals from sitting properly within your track? Let's go over some audio theory concepts before we get into mixing ideas.

Frequency masking refers to when multiple tracks occupy a similar frequency range. Often, tracks overlap and essentially cancel each other out to a degree, leading to muddiness, lack of clarity, and an indistinct sonic image.

Pretty much every instrument has some level of midrange. Some, like vocals and guitars, live almost exclusively in these mid frequencies.

The best way to combat this type of masking (there are others as well) is to use decisive EQ moves to carve out space for each element to exist without stepping on the others.

You can also use techniques like sidechaining. This will duck certain tracks while others in a similar frequency range are active so that the one you want the focus on is more apparent.

Getting the right phase correlation is one of the most critical elements of any good recording. While it's usually when you're recording a source with multiple microphones where phase issues creep up, it's something you should also keep in mind when recording and mixing vocals.

Take manual double tracking, for instance. It's a common technique to record the main vocal twice and blend the two tracks together.

This has a lot of benefits. It adds thickness and liveliness, and can be a great way to fix a pitchy vocal without having to add any tuning correction.

When you're doing manual double tracking, you're recording something twice. This means there will be subtle differences between each take - which is the point.

But if your vocalist doesn't have great microphone technique, it can cause phase issues. For example, if one take is recorded with their mouth right up against the pop filter or mic and the double is recorded half a foot away, the sound is hitting the capsule at two minimal but different times.

It's subtle, sure, but you still might find yourself having to manually align the waveforms in your DAW. This can compound if you're triple or even quadruple tracking the vocals. It's common to stack vocals like this, especially background vocals.

It's not always the production where phase issues lie. Some processing can introduce phase issues. Stereo "wideners" can be notorious for this. That's why it's always important to check the phase correlation with a metering tool throughout the process.

While tracking in the same room isn't as common as it once was, bleed from other instrumentation can be a factor in making vocals sit properly during mixing.

It can definitely help the vibe of a recording if everyone is performing in the same room, but bleed can make mixing the vocal a nightmare if you have snare hits and cymbal crashes all over it.

...you rarely get where you want the vocal to be using a single compressor. This is where serial compression comes in.

Everything in a mix is subjective, so don't take these as a "secret recipe" or absolute gospel. However, the following techniques act as a solid starting point from which you can fine-tune to suit your production.

There are some pretty standard moves when it comes to equalization on vocals.

You'll want to cut some rumble out of the low end with a high-pass filter. Generally, 75Hz to around 100Hz is a good point, but it will depend on the vocal.

Then you'll want to cut out the "mud" in the low-midrange. This is a little more case-by-case than the first step. Some vocalists have it build up around 175Hz-300Hz. Others are more in the 500Hz-700Hz range.

Just remember, with EQ, there is no magic recipe. Reducing the low and and removing mud before compression, will greatly improve the results. After compression is when we can boost for clarity or add 'air' - (more on this, here).

Few things can make a vocal stick out like sibilance. It's harsh, aggressive, and, depending on the vocalist, can be really noticeable.

You have a number of ways you can reel in a sibilant vocal. De-essers, EQ, clip gain, automation, and multi-band compression are just some of the most direct.

What you don't want to do is handle it with standard equalization alone. Sibilance is dynamic, and using a static EQ won't get you to where you need to be.

Learn all about de-essing tips and techniques in our tutorial. 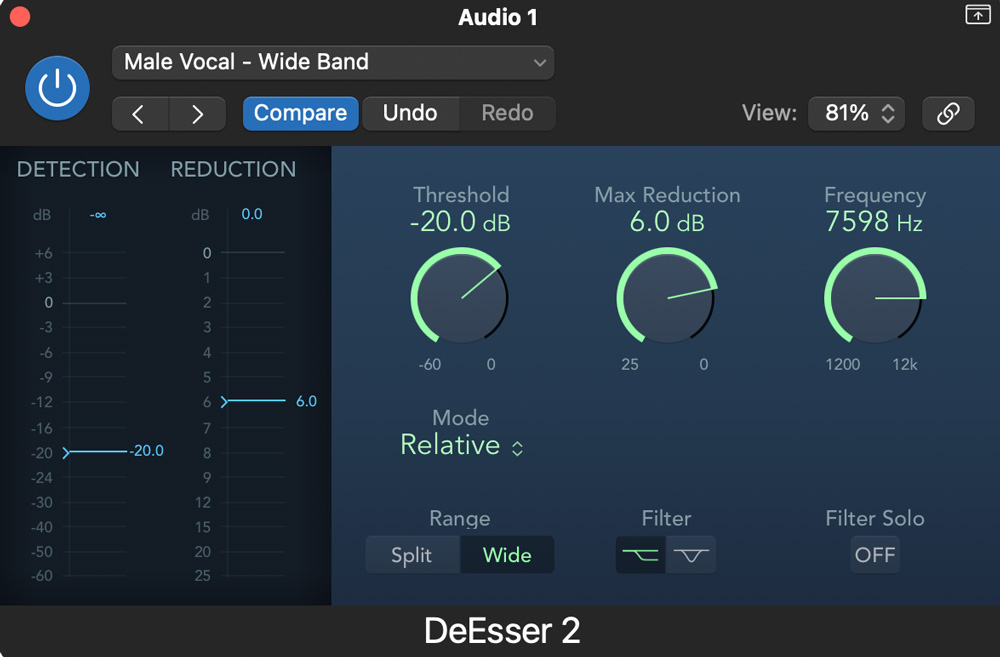 Compression can make or break a vocal recording. The general rule with lead vocals is to use a slow attack and a fast release.

If you want it to be right in the face of the listener, using an attack time that's too fast will neuter that. And how fast it is will determine to some extent.

When it comes to background vocals, things are a little different. By nature, you want them to sit further back in the stereo image. So a faster attack time usually works best.

Remember, you rarely get where you want the vocal to be using a single compressor. This is where serial compression comes in. You can try using a more aggressive compressor like the 1176 to do some of the heavy lifting, followed by a more gentle compression like the LA-2A further down the signal chain.

Many engineers use clip gain to even things out a bit before compression. If the dynamics are all over the place, compression can make sibilance worse. Using clip gain or automation can mitigate this problem. Try different approaches to find which one works best for your track. 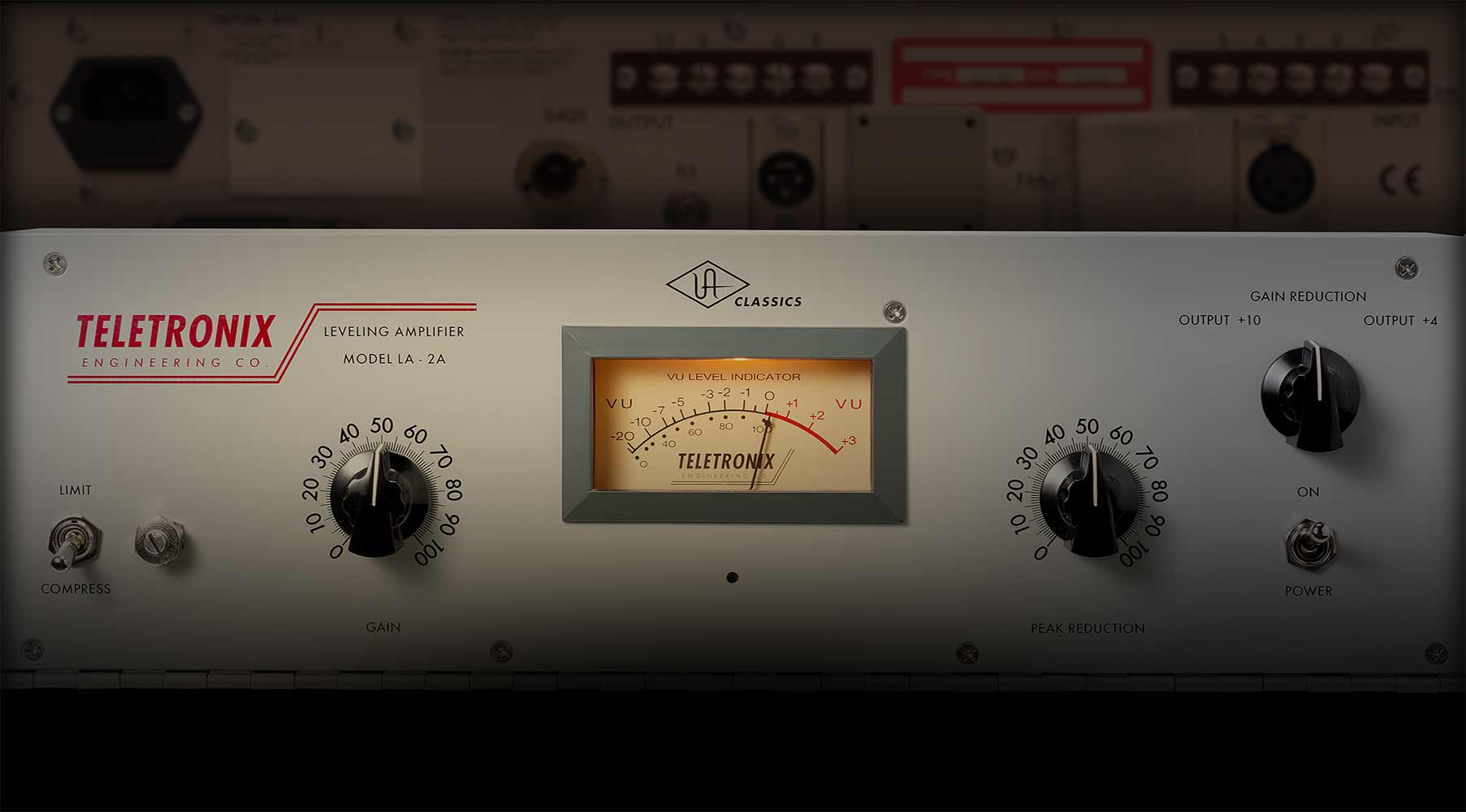 Time-based processors have been a staple of vocal mixing since the days of physical plate reverbs. They're a big part of making the vocal sound like it belongs to a track.

When applying reverb, it's common practice to use the same reverbs for groups of tracks. The entire idea behind reverb is to give the track(s) space, making them sound like they were recorded in a single space.

Setting up sends and routing these groups to them gives a sense of cohesion. For example, sending all your lead vocals to a plate reverb send, and instruments like guitars and drums to a room or hall.

Adding EQ to your reverb sends can be a great strategy. A lot of plugins these days have onboard EQ, but if not, add an EQ plugin before the effect to cut out low-end, muddy mids, offending high-mid and high frequencies, prevent it from sounding too washed out - whatever it takes to get it there.

The key takeaway here is reverb and the low-end, as too much low-frequency reverb gets muddy, fast!

Keep in mind the following tips when mixing vocals to sit in the mix:

You're running blind if you don't have the vocal going while you're mixing. Even when you're establishing a rough mix, it's important to start to understand how everything is coming together.

You can't do everything with compression alone. Approach it with the 80/20 concept. Generally, you'll get about 80% of your leveling through compression.

Automation is a great way to add some dynamics back to a vocal after you've compressed it. Let it flow with the vibe of the track. Does the verse need to come down, but the chorus needs a pickup?

The most important concept here is that your levels are consistent with the energy and arrangement.

Who needs mono when stereo was invented for a reason? You have two ears, right?

Wrong. The mono button is your friend.

So much is revealed when you throw your mix into mono. The balance and equalization between tracks will be much more apparent. And, the narrow sound field will shine a light on things you might not have noticed when playing it back in stereo.

When a stereo mix is put into mono, mono sources get louder.

More than ever before, people are listening on mono devices like smartphones and tablets. But you shouldn't sacrifice how your track sounds in stereo just because of this. You want to find a good balance.

Just like throwing it into mono, monitoring at low volumes is another way to tell where your vocals stands…or sits!

Too many effects can quickly make a vocal difficult to sit within the mix. Have a less is more approach, and remember context is key. In other words, what sounds good on its own won't necessarily sound good with an entire band.