How to Record Live Music: Ten Tips from a Pro Sound Engineer

In the days of analogue live sound, we were generally encouraged to keep our signals as hot as possible. These, of course, were the days when analogue saturation was common, pleasant-sounding, and very much part of the character.

Today with digital live sound, driving anything close to 0dBFS has the opposite outcome completely. It will result in digital clipping, where part of your audio is simply chopped off, resulting in a generally unpleasant, harsh-sounding audio for any signal that isn't given enough headroom.

When it comes to recording live, even if it's just for the purpose of virtual sound-checking, recordings are often made by the FOH Engineer. But it's not quite as easy as it may seem to wear both hats and keep your ears on the live mix and an eye on the levels of what's being committed to disk.

The good news is you don't have to be a grammy-winning engineer to fill this role. If you find yourself in these shoes for the first time, here are my top 10 tips that will guide you to a successful outcome.

This is more about seeing the band or artist you're about to record than preparing a track list and template. Listen in both sound checks and performances. Look out for particularly dynamic sections on vocals, guitars, synths, and drum pads!

You don't want to have something unexpected destroying your recording or forcing you to re-record certain sections later in the studio. Make a note of anything that stands out so you can ask for a rendition during sound check. Even better, do a test run of the show and monitor closely.

Check where things can be improved or problems solved. Make sure you're armed with all the relevant and important information, and above all, never delete anything until the project is completed. You never know when that little piece of magic will reveal itself.

Where possible, try to record in the later part of a tour instead of the early stages. Performances have a tendency, like wine, to improve with age!

This is probably the most important word you will ever hear with regard to digital recording, but it's magnified 10-fold when it comes to live recording.

This is often why location, film and TV sound crews are so well respected; second chances here are few and far between. As a guide, an RMS of -18dBFS is considered the 'sweet spot', but when it comes to classical and operatic performances, I refer back to point one.

Unsurprisingly, one of the biggest stumbling blocks to faithfully capturing the opening few numbers is something I call "the adrenaline factor". Again, this is another reason why leaving enough headroom is so vital.

You can spend an hour or so line checking and rechecking every instrument and voice only to find as the band launches into the opening number, everything is immediately 3-12 dB hotter than it was in sound check.

Now, this is not always the case with some genres, but it is true for the more traditional rock band formats. To avoid falling foul of this phenomenon, refer back to points one and two.

Again, this is part of ensuring you have enough headroom for your recordings to maintain as much of their dynamic range as possible, thereby providing you with the best possible audio recording going forward.

This is especially true if you're recording with Pro Tools, Universal Audio's Luna or other DAWs that allow you to use console emulations and Plugins of classic analogue studio outboard gear. You must check every stage to ensure the gain isn't creeping back up (or down) as it passes every enhancement on its way to your hard drive. 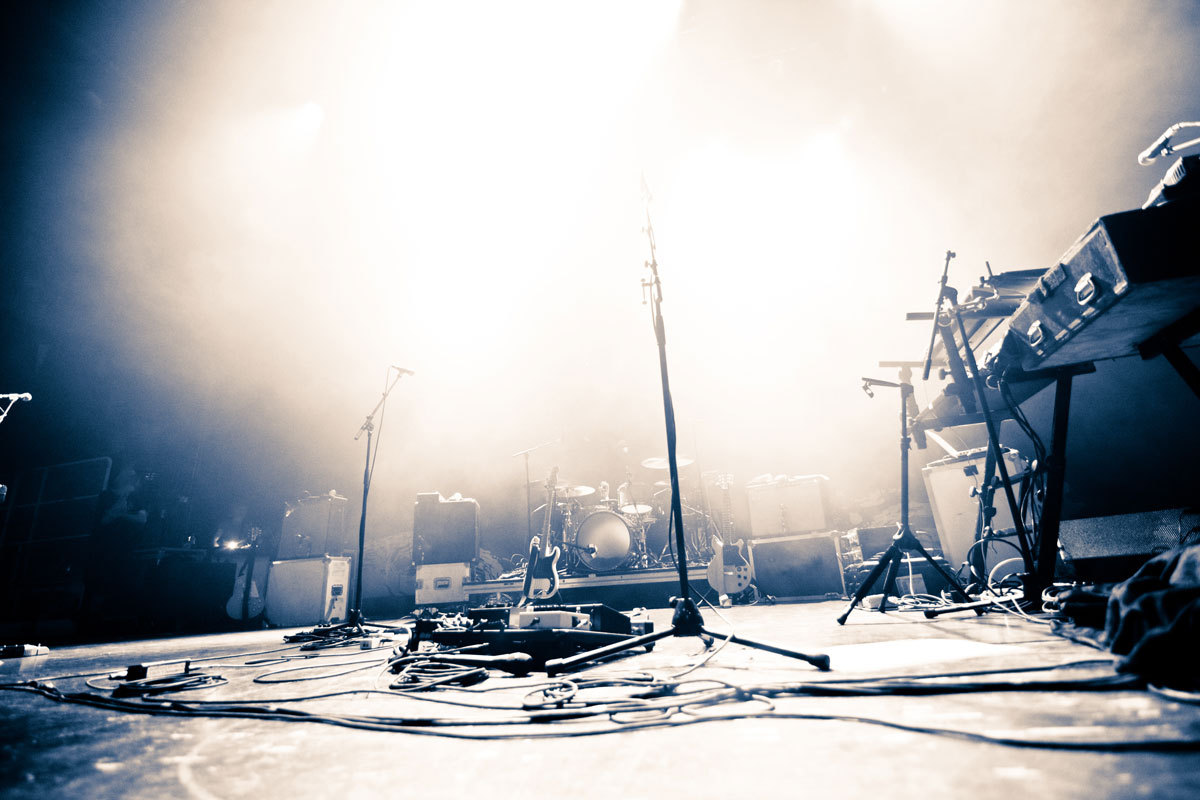 Just because a particular mic or close micing technique works well through a PA, it doesn't necessarily mean it'll sound good when recorded. Don't be afraid to add additional mics if the console and system allow—you'll be able to use these to your advantage later.

An example is your classic Shure SM57 against the speaker grille setup when, in reality, you'd rather benefit from the recording quality of a Royer R-10 or R-121 ribbon mic on the cab.

That said, be aware that the figure of 8 polar pattern might not suit the environment of a stage where the guitarist could be constantly jumping about in front of his amp. In this case, a cardioid condenser might perform better. All the same, don't be afraid to experiment if you have the opportunity. A little extra hard work at this stage can reap greater rewards when it comes to mixing.

Removing unwanted low-end energy can help keep your headroom consistent and make the mixing stage a lot easier. Classic examples of this are acoustic guitars, overheads, nearly everything orchestral, and vocals. These sound sources have a large amount of low-frequency energy, which can quickly wreak havoc on your signal's headroom.

It's common to record in the studio using a certain amount of compression on the front end, but this can be a little trickier in a live environment as compressing signals can emphasise spill and background noise from the stage.

When recording a band live, it's often better to employ simple limiting and leave the clever processing to the mix stage. Either way, let your ears be the judge, and if possible, always see if any isolation can be employed to help reduce spill across multiple mics. This will also help reduce the likelihood of phase issues when mixing your recording.

Be sure to record the audience... Rick Dickerson

Again opinion is divided, but if you're carrying a rack of active splits and a rack of Apollo's, Hapi's or prism's, then by all means, use them. However, running a digital split from the console via Madi or Dante will likely give you excellent results. While you would need to select the appropriate interface or virtual sound card, there is absolutely nothing stopping you from utilising, say, a handful of UAD plugins from a connected device. And, of course, nothing limits your use of native plugins.

The easiest way is to simply take a digital split. This gives you more time to focus on getting the levels right. In many cases, this has already been done for you by the FOH engineer.

Again simplicity is the key. While we all know that audio sounds better at higher sample rates, if the digital split is from a desk running at 48kHz, then record at 48kHz.

Converting to a high sample rate won't improve the original audio, it might fractionally improve the quality of your reverbs, but it won't make your source audio any better.

If your split is at 96kHz, record at 96k. If you're sporting the luxury of your own active splits, then you can dictate your own sample rate system-wide.

Lastly, this might seem obvious, but it's often overlooked: be sure to record the audience. Let's face it, the only reason for taking to the stage in the first place is the crowd's reaction. Without an audience, there is no live recording!