I Have Seen The Guts Of Every Label: Atlantic UK EVP Austin Daboh On Breaking New Talent

Austin Daboh, EVP at Atlantic Records UK speaks to Headliner about the company’s new talent drive, uncovering new cultural moments and how the label has had to evolve during the pandemic.

Having recently struck new deals with key players in Ireland’s black music scene and UK-Latino label Candela Records, Atlantic has been striking out into burgeoning new movements in a bid to break them into the mainstream. Here, Daboh, celebrating his first year with the label after hugely successful senior editorial roles with BBC Radio 1Xtra, Spotify and Apple Music, tells Headliner about the company’s ambitions to shine a light on underserved communities and how his ear for new talent has developed down the years…

Thanks for joining us, Austin. Atlantic Records UK recently signed a joint venture with Trust It Entertainment, which is home to some of Ireland’s most exciting rap, hip-hop and drill artists, such as A92, Andre Fazaz and Offica. How did this partnership come about?

At Atlantic, co-presidents Ed Howard and Briony Turner want us to be constantly curious about culture and invest in places where others may not be looking. We saw there was a new generation of young black Irish kids, the sons and daughters of first-generation African immigrants and they were proud of their dual-culture upbringing.

The best art is often a result of cultures melting together and we started seeing more and more anecdotal evidence that there was a thirst for black Irish music. We started looking at who was making moves over there and came across Trust It Entertainment, who were having real success in Ireland in terms of energising the black music scene, so it made sense to start a conversation with them.

While we were having those conversations, our hunch was proven by watching Fumez the Engineer, A92 and Offica’s Plugged In Freestyle crashing into the OCC charts, and this was the first time that a non-UK mainland rapper, or set of rappers or crew, had crashed into the OCC (at #39).

So, for us, we’d had this cultural hunch, and we went out there to anecdotally put the pieces together, but this was the piece of data that we needed to prove our hunch, and that’s how those conversations intensified.

What will each party bring to the table?

Everyone will bring a different strength. Atlantic will bring the same thing we bring to the table for any artist who signs to the roster - magnification of marketing efforts, expertise and understanding of how to read and react to the market, and knowledge of how to allocate budgets in certain areas so that general public are bumping into the track in their digital and real-life journeys.

It’s also about having some A&R finessing and making sure the world class A&Rs we have at our disposal are adding that finishing touch to records that are almost there but require that little bit of expertise. And we have great relationships across the board to help bring those records to certain areas.

What Solomon Adesiyan will bring as the founder of Trust It is, well, Solomon! We’re not only investing in the culture and Trust It as a company, but we’re investing in Solomon as someone we believe is a future exec of this industry. He’ll bring that cultural knowledge and understanding of what moves the culture forward.

How long has this scene been bubbling under the surface for?

It’s been under the radar for a little while. In previous roles I’ve been in, I’d always had access to a level of data that the average person in the industry wouldn’t have due to the companies I’d worked at. And there was always this tiny little heartbeat happening in Dublin. I’d look at a rapper’s monthly listeners on a platform like Spotify or Apple and Dublin was always there or thereabouts.

So, I had this theory that even though we weren’t seeing or hearing it, there must be something bubbling in Dublin. I then went on a fact-finding mission to Ireland over the course of about a year, and once I’d peeled back the curtain it was clear there was a mad, frenzied scene happening in Dublin and the wider Republic of Ireland that was bubbling but hadn’t been discovered.

It was a really exciting time. And a breakthrough moment was Rusangano Family winning the Choice Music Prize, which is Ireland’s version of the Mercury Prize. That was the first time a hip-hop group had won it and the first time a homegrown rap act had won a mainstream award in Ireland.

But just like any new industry or genre of music, there was a lack of organisation, infrastructure, and platforms. There wasn’t that group of certified managers that could take things and magnify them to the rest of the industry. So when I got to Atlantic one of the first things I wanted to do was investigate Ireland.

How difficult has it been to sign and develop artists during the pandemic?

Nothing beats the meeting someone in the flesh and nothing beats the ability to see someone live. But we’ve been quite lucky that parts of the music industry have been able to carry on during the pandemic. We’ve been able to shoot music videos, go to studios at certain times, and that has allowed us to stay flexible in meeting artists and making judgment calls on who we want to sign.

The whole team has been working like mad to make sure there is a strategy in place to sign world class artists during the pandemic, and that’s been shown. We were able to sign Tion Wayne, who had one of the biggest black music moments - you could argue one of the biggest pop moments - of 2021.

We were able to sign Darkoo, a huge new talent, the number one selling afrobeats artist of last year. We’ve been able to get deals done with world class talent, so from a new signings point of view we’ve had to adapt, and the music industry has always adapted. Once those artists have been signed it’s about being innovative, being creative and looking for opportunities amongst the chaos. 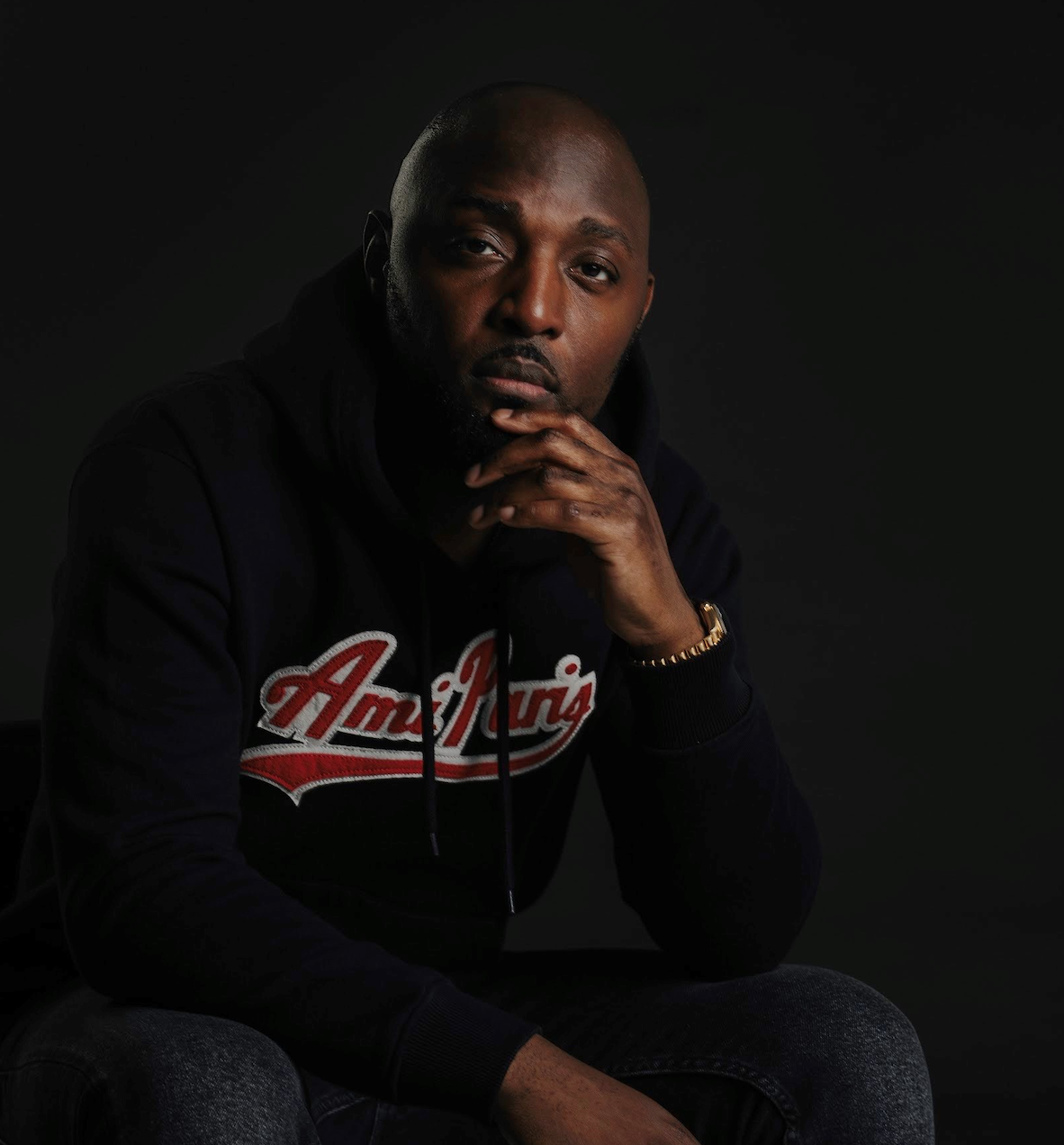 It's about looking for opportunities amongst the chaos. Austin Daboh, EVP, Atlantic Records UK

How have your experiences at 1Xtra, Spotify and Apple Music informed your role at Atlantic?

They were invaluable. My day-to-day hasn’t really changed in 15 years - I wake up, listen to music and the music me and my team like we try to support. The ways in which I can support those artists have changed in different guises, but that’s what my job has always been. I’ve been lucky in that I’m one of a very small handful of people that have dealt with every single record label because I’ve sat in the middle, both in streaming and radio.

I’ve seen the guts of every single label, from small independents all the way to the big dogs like Atlantic. So, it gave me an insight into the way different companies work. I always admired the way Atlantic carried themselves – I’m not saying they’re perfect - but I liked how they carried themselves and I wanted to carry on that tradition.

Understanding audiences from a different point of view has been vital. I’ve always had jobs where you serve the audience, not the song or the artists. Sometimes that is to the detriment of relationships. At radio and streaming we had to think of the audience first, so no matter how many amazing stats were thrown our way, the way the audience reacts is the truth.

The audience always reveal the truth. One of the things I am glad I can bring as a skillset is looking at the audience in a different way, looking at how they react to our releases and finding new ways to talk to them.

Outside of that I’ve learned that the start of the record isn’t the end of a record. I’ll let you into a little secret I’ve never said before. The playlist meetings at radio used to be transcribed, and in the garage outside my house I have all of the playlist meeting transcriptions from down the years while I was there, and you wouldn’t believe the amount of number one, record breaking records that started off with a ‘this isn’t a hit; this artist is too old’! It’s important to stay calm if you don’t immediately get the results that you want.

You’ve also announced a new partnership with UK-Latin-based label Candela Records. How much potential is there in the Latin-UK hybrid scene?

The Latino community is a real underserved community in the UK. There is just under one million people of Latino heritage in the UK, which is a sizeable chunk of the population. But it’s not necessarily a culture that we see reflected in TV, media or music, outside of the stuff we import.

With Candela Records, we started researching what was happening in the Latino cultural space in the UK and we came across a company called Latino Life, which is a multi-faceted company that have music, TV, radio and publishing arms.

And we were fascinated by their ability to coalesce the UK-Latino community towards their sold out festivals and bring tens of thousands of people to their content, yet it was completely under the radar. So, rather than waiting for it to blow up, we want to take a few early shots on goal, make some early investments and partner with the culture in its early stages.

How has your ear for identifying a great artist or record developed through your career so far?

All humans have the ability to pick out a hit, and I like to think my ear has become slightly more matured. But it’s not perfect, there are shitloads of records I said early in my career would be hits and they weren’t, and there were loads of artists I said would be stars that weren’t. But as long as you have a decent strike rate and get more right than you get wrong, you’ll be in a good place!

At Atlantic, there are world class experts who have ears and tastes that are far more refined than mine, so I’d like to big up Rich Castillo, Kevin Christian-Blair, Emily Kent and of course Ed and Briony, who now run the label.

There are loads of people here with amazing ears. I’m not an A&R by trade but I’d like to think I can pick out a hit, but I really leave it to the experts. Then I come along, shout about it and hopefully take it to market with my team.