‘I’m not for everyone’: Lissie talks isolation, Twin Peaks and creating Carving Canyons

US singer songwriter Lissie joins Headliner for an in-depth chat about the personal challenges she had to overcome to make her new album Carving Canyons, the magic of working in Nashville, and how she wound up performing on David Lynch’s Twin Peaks…

We find Lissie tucked away in the lounge of her Virginia home, taking shelter from a storm that is currently raging across her sprawling 45-acre farm. The cosy interior and comfy surroundings, not to mention her warm, talkative manner, offer no hint at the conditions outside. “This is such a busy time of year in terms of gardening, growing vegetables, watering the trees and flowers, and just taking care of the earth the best I can,” she says with a smile. “It’s a fun but busy time, but at the moment it’s crazy awesome thunder and lighting, which is perfect as I’m inside today.”

From the moment Headliner joins Lissie over Zoom, she is immediately engaging and entertaining company, happy to discuss everything from the workings of the vast farm she currently lives on, to the isolation and grief she felt following a messy breakup at the start of the pandemic, and of course, her new album Carving Canyons.

The follow-up to her last studio album, 2018’s Castles, Carving Canyons marks a change of direction from its predecessor. While Castles was largely built on a foundation of electronic and piano infused pop, Carving Canyons leans into more traditional country and folk-pop territory. Written primarily in Nashville, in collaboration with producer Curt Schneider (Patty Smyth, Lucero), and a handful of local songwriters, it’s easy to see why the record evolved as such. And as Lissie explains, a change of scenery was vital, given the circumstances that preceded the initial writing sessions for the record.

“After releasing the last album I was touring a lot and I put out a collection of piano versions of some of my songs,” she recalls. “Then there was the pandemic and there was just a lot of intensity in the world. The time just flew by, and I hadn’t really thought about making a new album. And in May 2020 a relationship I had been in for a couple of years ended. Things were feeling so chaotic, politically and with the pandemic, and I was pretty isolated, so it took me some time to start writing.

“For the first six months or so of the pandemic it was like, where do you even start to say anything? There was so much to process, and I think we are still processing it. But then in November of 2020, after spending the summer going through this cycle of trying to grow stronger as a human and have more acceptance about things, I felt this arc of grieving, not only the relationship, but also the process of moving through all these feelings. It was then that I started writing in Nashville with some great songwriters. And in February of 2021 I went to LA and started recording the album in three song chunks. I’d go home, do some more writing, then go back to LA in April and then in June. This album was really unique to make for me because it was the first time I have made an album over the course of a year. And a lot changed for me emotionally over that year. It’s been interesting to see things from the other side of something that was so rough.”

Having navigated the initial trauma of the loss of her relationship and Covid-imposed isolation, Lissie eventually found comfort in songwriting. It also helped her to reflect and process the extremity of what she had endured.

“It was absolutely therapeutic,” she says thoughtfully before pausing. “In November 2020 I was doing better but I still felt a lot of hurt and anger and sadness. I didn’t feel like I had closure at that point. Not to go into detail, because I’m over it now, but I had been with someone for a couple of years, living together, and then the pandemic started… He ended up leaving me for someone he was working with. It was so shocking, and then to not be able to work or see my family or hug anybody… I was really unwell. It was almost a little scary how much I was struggling.

“That being said, I’m doing a lot better now,” she says with a laugh and a smile that instantly breaks the pensive tone that had crept into her voice. “I funnelled all of that into those early songs, then as time went on, I wasn’t quite so upset. That’s probably why I make music. These are universal experiences. Other people have been hurt and betrayed, so hopefully my music can help other people who have been through it, because when you’re in it you feel like you are the only person who has ever felt that bad. But it gets better. Music really did help me keep on keeping on and stay focused on what was coming on the horizon.”

The sense of hope she speaks of can be heard throughout Carving Canyons. Despite the events that informed its creation, there is a warmth that radiates across each of its tracks, distinguishing it from the typical ‘breakup album’ mould. However, this aspect of the record, Lissie says, was not the result of a conscious attempt to offset the subject matter with a lighter sonic backdrop, but something that arose organically in the studio.

“I wish I could tell you I was very clever about it all,” she says with a laugh. “I have been working with [producer] Curt Schneider for a long time and we do a lot of talking. I might talk about my life, he talks about his life, then he brings in these great musicians. We’d have these really good hangs. There was a great dynamic and I was able to talk to them about what I had been going through. I want my songs to be able to go to dark places, but there is always hope there.”

Lissie and Schneider’s relationship can be traced back to 2007, when the pair worked together on her breakthrough UK single Everywhere I Go, which remains one of her favourite songs to this day. Since then, he has, she explains, continued to play a pivotal role in her career, both on a musical and a personal level. 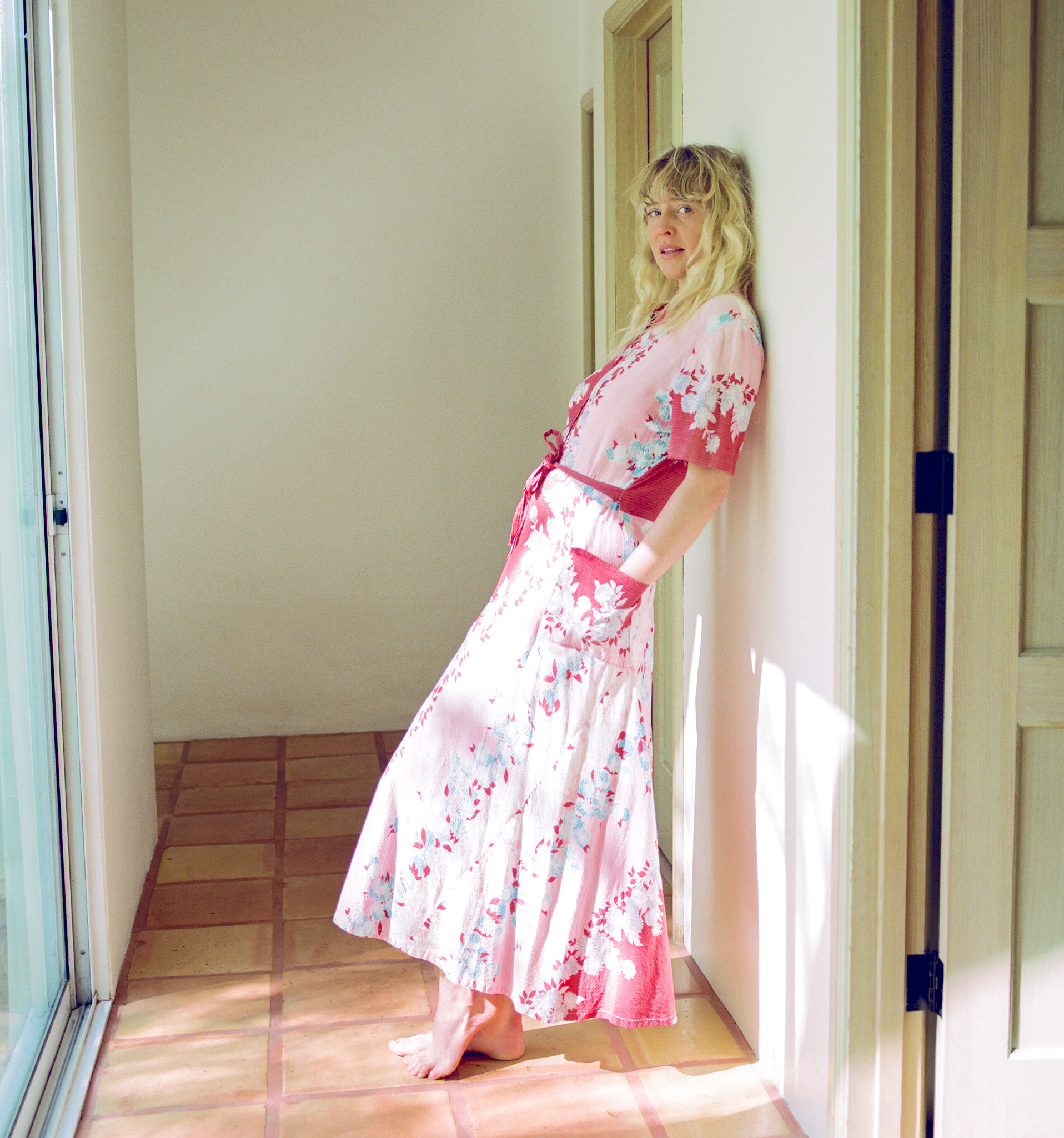 I want to go to dark places, but there has to be hope. Lissie

“The fact we have that history means he takes me seriously, he wants to help me express myself, even if I’m terrible at talking about music,” she says with a hint of self-deprecation.

“Sometimes I can be a little bit lazy, like, I don’t necessarily want to be in a vulnerable position at this point in my life, so trying to get some new person to understand me…

“For me it is nice to have someone who has truly listened to and respected what I am doing, and he is a great musician and songwriter and has a great network of people. And I can be kind of long-winded, as you can tell from this interview,” she laughs, “but when I was younger, I could come across just kind of frazzled or flaky and speak in a stream of consciousness. I’m not for everybody when it comes to spending a lot of time together! We’ve always had this chemistry, and I have worked with producers in the past who just wanted to do what they wanted, and they would get frustrated with me if I had an idea in the middle of something they wanted to do. But Curt always makes me feel heard. And if it doesn’t work it doesn’t work. He sees that even if I present as a bit of a goofball there is some intelligence and a more serious side to me!”

While the partnership they have developed clearly manifests itself on Carving Canyons, so too does the location in which it was made. According to Lissie, the magic of Nashville seeped its way into each and every pore of the record.

“Working in Nashville really does rub off on your music,” she says. “My first album came out in 2010 and I recorded that in 2009 in Nashville. And even in 2007 and 2008 I would go to Nashville to co-write, and at that time it was this sleepy little country town and now it has blown up and I marvel every time I go at how many condos and high rises keep going up.

“But I keep going back there to write, and that’s partly because a lot of the best songwriters are there. They have a great knowledge of songcraft, melody and turns of phrase. There is something special there. It pushes me to try to tell a better story. And everyone is so nice and down to earth, it feels like something cool is happening everywhere you go. Plus, my voice always feels really good while I’m there as it’s humid, whereas sometimes I go to LA and my sinuses will act up.”

As we round up our conversation, there is just enough time to touch upon the uncanny circumstances that saw Lissie perform Wild West from her 2016 album My Wild West on the long-awaited return of David Lynch’s Twin Peaks. Some 26 years after the cult show’s second season aired, season three of Twin Peaks arrived in 2017 with each episode concluding with a live musical performance in the show’s notorious Roadhouse. Among the other artists to appear throughout the series were the likes of Sharon Van Etten, Nine Inch Nails, Eddie Vedder and many more. So how did her journey into the world of one of TV’s most iconic creations come about?

“It was kind of Twin Peaks eerie how it all came about,” she says. “My bandmates who were on Twin Peakswith me were on a tour bus for the first time, and we had the Twin Peaks DVDs, so we would watch it every night and be like, ‘we’ve got to get this gig done so we can carry on watching Twin Peaks’! So, we were about a week into watching it and we hear that David Lynch has been talking about us in interviews and had Tweeted about liking some of my music and videos. Off the back of that I ended up speaking to him on the phone before the record came out, and he came to a show and I visited him in LA. It was so flattering because he is a visionary.

“Then in 2016 we heard Twin Peaks was returning and that there would be live music in each episode in The Roadhouse and would we want to be a part of it! It was such an incredible thing to be a part of, and we had the best time doing it. And he is such a kind and generous person. It was so surreal to be watching Twin Peaksthen suddenly talking to David Lynch. And it made us feel so cool!”

Carving Canyons is released on September 16.