On July 15, Interpol release The Other Side Of Make Believe, the New York band’s seventh studio album and one which has pushed them out of their comfort zone like never before. Frontman Paul Banks sits down for a chat with Headliner about being forced to try new things two decades into their career, and how they survived the East Coast’s early ‘00s indie rock boom…

On Wednesday, June 16, the lights go down on the Camden Roundhouse as the glacial, reverb soaked opening bars of Untitled, the opening salvo of Interpol’s debut album Turn On The Bright Lights, ring out across the venue.

The band, dressed as standard in sharply tailored black suits and bathed in a twilight blue glow, cut as mysterious and intriguing a form as they did when they broke out of the New York indie rock scene that exploded at the turn of the millennium. With little more than a brief hello and an occasional ‘thank you’ to the crowd, the band powers through a setlist that draws heavily from said debut and its 2004 follow-up Antics.

A smattering of fan favourites from their subsequent records are also thrown into the mix, with just a couple taken from their new album The Other Side Of Make Believe, which is released on July 15. It almost feels like a homecoming show, and by the time they bring proceedings to a close with a storming Slow Hands, there’s little doubt amongst those in the room that it’ll be one that lives long in the memory.

Fast forward a fortnight and Interpol frontman Paul Banks is chatting to Headliner via Zoom about that night in the capital.

“That show was a lot of fun, a lot of great energy,” he recalls, relaxed, eloquent, and generous with his time. “In fact, it was a super awesome audience, so that was a great show among many. It’s been a lot of fun being back on the road. It’s more fun than it’s been in a long time. And I think we’re playing very well. [The time off from touring] was almost a good reset for the live thing. Also, the spectre of the possibility of live shows not coming back, having been in the back of the mind for a while, means that being back on the road has this second level of paying off, like, ‘shit, we’re here, period’.

Despite being one of the leading lights of the early ‘00s NYC indie boom, Interpol often found critics of the time drawing parallels between them and British bands such as Joy Division and The Smiths, as opposed to any of their East Coast contemporaries. This, Banks explains, has played no small part in the welcome they so warmly receive from UK audiences to this day.

“There is a great relationship with the UK and there are some elements as to why that would make sense,” he explains. “There is a certain Britishness to our sound, plus, I was born in England, Daniel was born in England, so there is a connection. But we were really introduced to the UK as part of the New York wave in the early 2000s, so we are quintessentially a New York band. But there has been a connection with the UK. The UK broke The Strokes, and the NME was involved in this New York rock scene hype that was more exaggerated than what was happening in New York at the time. So, we really started out over here with our best foot forward.”

That 2000s wave is a topic that comes to the fore again during our conversation, but our attention turns quickly to the upcoming release of The Other Side Of Make Believe, Interpol’s seventh album to date and the follow-up to 2018’s Marauder.

It represents the band’s biggest sonic and musical leap to date, with Covid forcing Banks, guitarist Daniel Kessler and drummer Sam Fogarino to collaborate remotely for the very first time. The result is a record that is at times gentler and looser than anything that’s come before, with bass and piano pulling focus at times from Kessler’s trademark sparkling guitar lines. Make no mistake, it is still every inch an Interpol record, but the unfamiliar process from which it was created has unquestionably left an imprint.

“We found ourselves in late Spring, early summer 2020, all in different countries, being like, ‘why not start jamming on some material?’” he recalls. “Daniel had a batch of songs that he emailed to me. I bought a bass as I was living in Edinburgh at the time, so that was one of my pastimes during lockdown, day and night. So, I’d be writing basslines to these jams and then trying to do some vocal parts, which I would send to Sam so that he could create a groove. We would make do passing the baton around in a circle between the three of us and we just hashed it out that way.

“Historically, Daniel will bring songs into a rehearsal and we’ll just jam them and build up our parts live together, including the vocal,” he continues. “Not having that live room experience in the beginning with these songs made it a unique process for us, because I wasn’t competing with the drum volume when I was creating the vocal melody, or I wasn’t worried that I’ll keep fucking up the bassline I’m trying to write, as no one is having to hear it. Instead, I could master it and send it once it was exactly how I wanted it to be. There were some interesting benefits that came from working in isolation, but then we were able to get together in the Catskills last year to try out the material in a room together. In the end I think it sounds like us, but there are some new dimensions to the sound because of that remote writing process.

“My vocal and bass approach would have been different. Some of the songs are quite stretched out and relaxed, even the tempos, and that’s refreshing for us, but probably wouldn’t have been the outcome if we were writing together in a room. Seven albums in, it's not a bad thing to be forced to try new things in the writing process. Songs like Something Changed and Greenwich have a nice pacing because we were just enjoying them leisurely at home.”

Another key factor in this sonic shift was the involvement of production icons Flood and Alan Moulder. According to Banks, they opened the band up to outside influence in a way they have seldom explored.

“We’ve worked with Moulder before, he mixed a couple of records for us, but we’d never worked with Flood,” Banks notes. “He’s a really interesting dude, a really talented producer, and has an incredible sensibility towards musicians and sound in general. He brought some real good mojo to the process and coaxed the best performances from each band member. He got an idea from the demos of what the songs should be and he helped to carry us over that line. 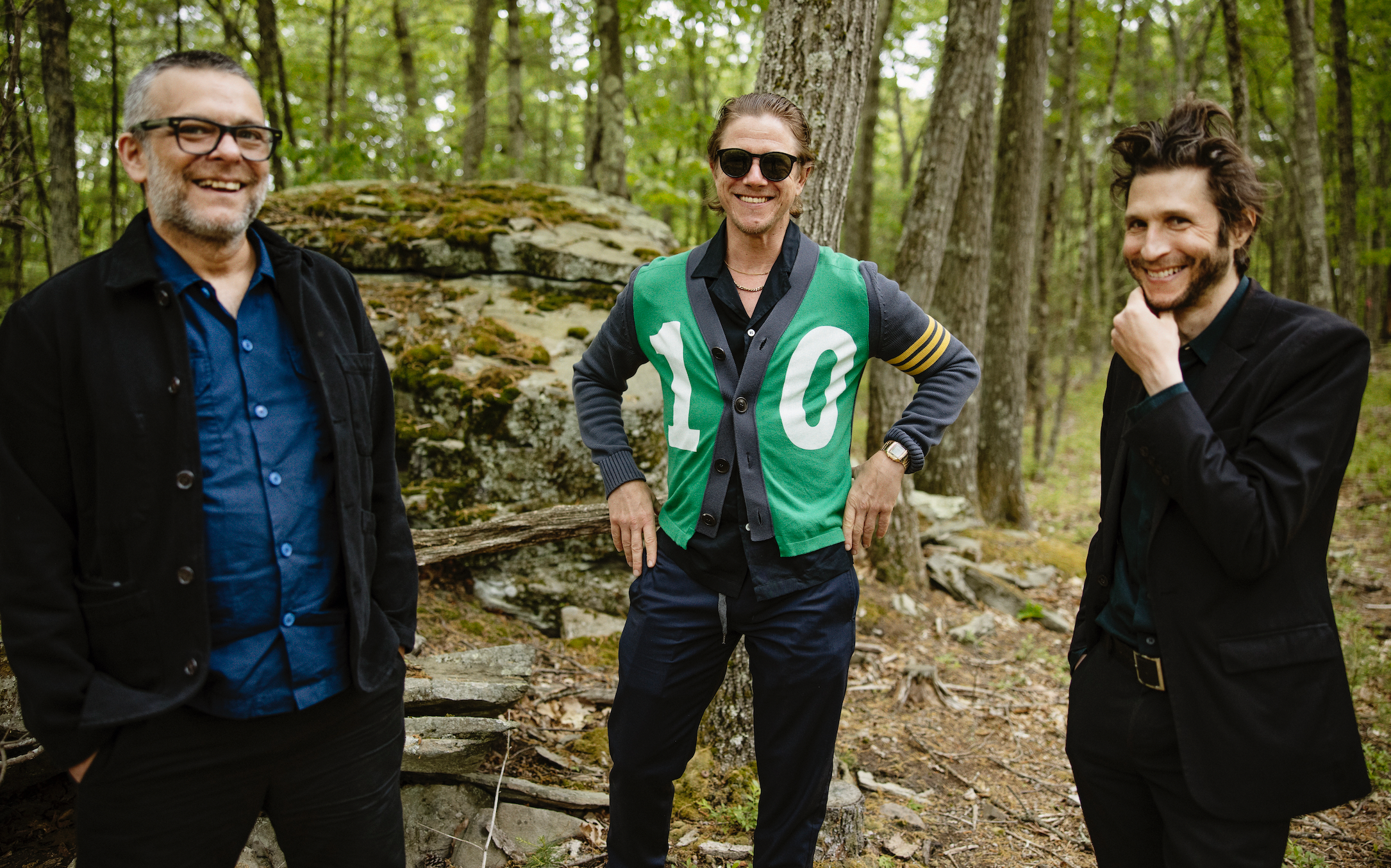 We still have chemistry. That's why we're still around. Paul Banks, Interpol

“An element of our sound is that we have rehearsed shitloads before we record, that’s why our sound has always been pretty meticulous, because we have played the songs hundreds of times in a room while we’re mapping out our parts. That makes the band really tight and has become one of the signatures of our sound. But with the last two records we’ve really invited Dave Fridmann and Flood in to deconstruct what we’re doing. Typically, it’s pretty well fleshed out, we’ve done a pretty good job of leaving enough open for a talented person to contribute something to how the record winds up, which is cool. The last two albums have really opened up that door.”

After touching on some of the other producers Banks particularly admires – special mentions go to RZA, Madlib, J Dilla and El-P – our conversation returns to the subject of NYC in the early 2000s.

Alongside Interpol, local luminaries such as The Strokes, Yeah, Yeah Yeahs, and TV On The Radio made up just a few of the bands spearheading a scene of rock’n’roll decadence and excess that would define guitar music on both sides of the pond for years to come. Predictably, perhaps, few of those acts – not those aforementioned – were still together or making music in a meaningful way by the end of the decade. So how have Banks and co endured where others crashed and burned?

“There’s a level of professionalism that goes into not derailing the gig,” he says carefully, pausing to consider his answer. “And the most important thing is that we still have chemistry together. That’s at the base of why we are still around. We still have musical ideas to express together; when we are writing it still feels as interesting and fresh as ever. We still inspire each other and are not all out of ideas. On the contrary, we still feel excited about the collaboration. And then there’s the professionalism of just not letting things go off the rails, whether it’s professionally or personally. We’ve always been serious about the fact we are a band, we make music, and we are really privileged to be in this situation. We just keep riding the wave of inspiration and trying not to fuck it all up!”

As for his recollections of the scene at the time of Interpol’s emergence, he insists there was a degree of hype in the music press’s portrayal of the era.

“There was hype in the depiction of how the scene was,” he says, “but I don’t think it is just hype to say a lot of really great music came out of the same city at the same time. If I look at TV On The Radio, Yeah Yeah Yeahs, Blonde Redhead, The Strokes, Liars, The Walkmen, they all have total longevity to me, and will continue to be appreciated and discovered for a long time. The greatness of those bands, I don’t think, was a hype job. But the illusion of us all chilling at the same bar on the same night saying, ‘hey, check out my new demo’ to The Strokes [he laughs], it was never like that.”

He also pays tribute to the UK’s Sea Power (formerly British Sea Power), who the band spent time on the road with during their early years.

“They’re the best,” he states. “We loved touring with them and their shows were absolutely incredible. I loved the lyrics, all the musicians, all of their personalities were fantastic. A really, really great band. That first record Apologies To Insect Life is amazing. I haven’t stayed super up to speed with them but I’m not at all surprised they have been consistently releasing great music because they are the real, bona fide item.”

Despite being just weeks away from the release of The Other Side Of Make Believe, Banks, as has been the case for the past two decades, also has a number of extracurricular activities on the boil.

In the past he has released solo records under the moniker Julian Plenti, as well as his own name, while his collaborations with Wu-Tang Clan’s RZA (Banks & Steelz) and his latest outfit Muzz, have revealed musical sensibilities far removed from what Interpol fans may be familiar with.

“I’m always working on something, always writing something and different outlets come along or I’ll just choose to do a solo thing,” he says contemplatively. “Muzz is a record I put out at the beginning of the pandemic and that’s something I’m really proud of. We’re great collaborators and will definitely do something else. I’ve heard RZA is saying he’s down to do some more Banks & Steelz, which I’m always down for. And I’m working on some solo stuff now. There is always music to be written.”

For fans of Banks and Interpol, long may that continue.