One moment IRKO was working on music in his dad’s garage just outside of Venice, the next he was in New York engineering Jay Z’s Kingdom Come album…

“I've noticed in my life that stuff develops in steps – but not in a linear way,” muses Italian multi-platinum audio engineer IRKO from his studio complex in L.A on his springboard into the hip-hop big time. “It's like, one day it's here, the next day, it's here,” he says, widening the gap between his hands dramatically.

The source of his new favourite genre? A nearby US air force base, where he would later go on to hone his skills as a DJ.

“Niche is not even the right word for my musical taste at the time,” he points out. “Nobody knew what any of that was where I was from – no one! So that shows the weirdness and the uniqueness of my situation.

"My little town started hearing about the stuff that I was listening to once I was able to drive. I would blast music in my car driving around this little town with 30,000 people in it,” he reflects nostalgically. “I would drive around in this car where the subwoofer was more powerful than the engine!”

Fast forward to 2023, and he’s refined his car collection. “One of the cars that I drive often is a DeLorean,” he says, smiling.

“You better believe that's the best looking car ever. Man, I drive a UFO! I still remember to this day, being a kid watching Back to the Future on my little cube TV in my bedroom, and now I drive that car and I live in the same city where the movie was shot. It's crazy, right? But it just kind of happened. It wasn't really by design.” 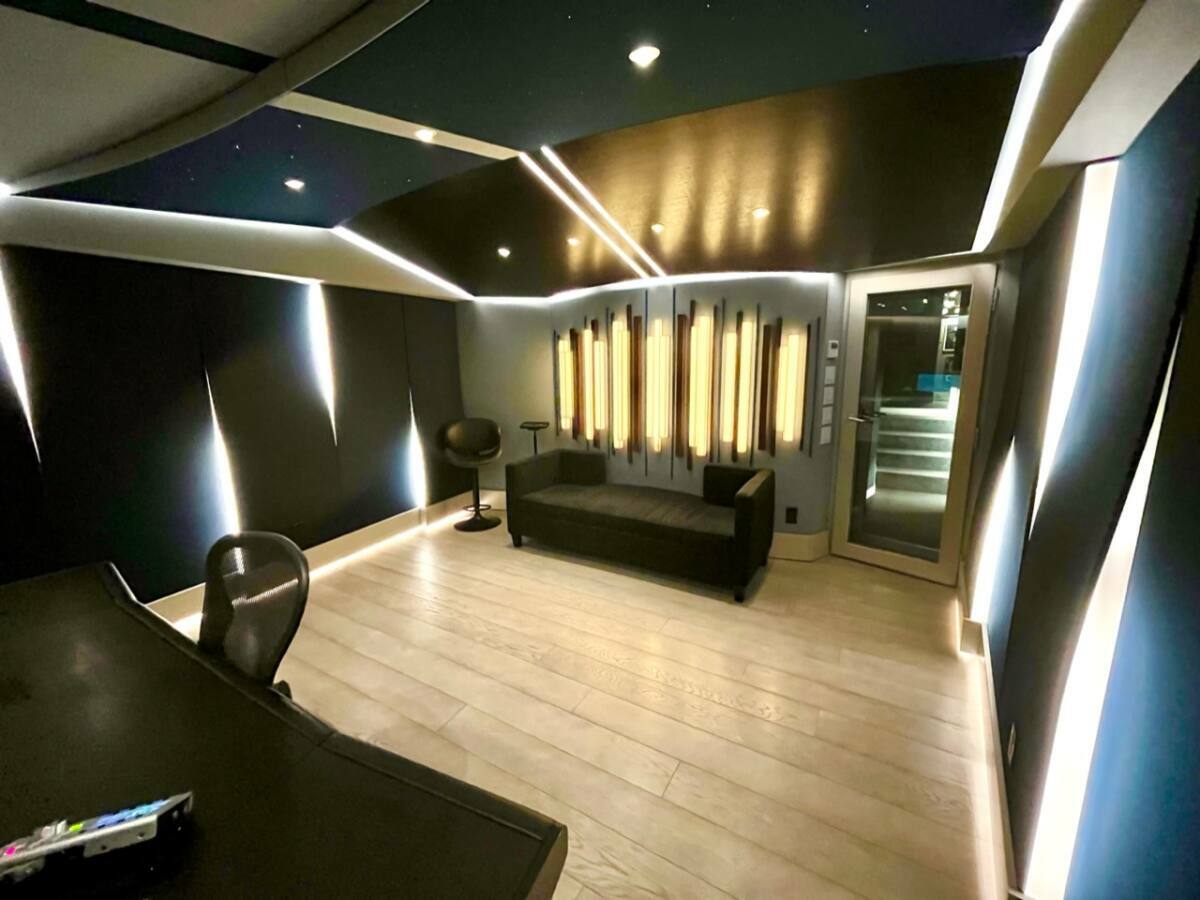 This new chapter of my life opened up in the most dramatic, typical IRKO way.

After getting a taste for manipulating music by DJing locally, IRKO set up a small studio in his father’s garage, inviting local talent over to record. By the early 2000s, he’d outgrown his modest set up and had connected with Tokyo-based producer B-Money on Myspace, who invited him to New York.

“This new chapter of my life opened up in the most dramatic, typical IRKO way,” he recalls. “I was involved in a very large project right away – three weeks into being in the country. That was a ‘welcome to America’ moment right there!”

No sooner had he adjusted to the timezone and IRKO was working on Jay-Z’s so called “comeback album”, Kingdom Come. Featuring guest appearances by Beyoncé, John Legend and Usher, the rapper’s ninth studio record debuted at number one on the US Billboard 200, sold 680,000 copies in its first week and was nominated for Best Rap Album at the 50th Grammy Awards.

“The hilarious contrast was that I was working in New York, but my diet basically consisted of fruit and the little snacks that they had at the studio,” he confesses with a chuckle.

“And when I didn't go to the studio, my plan B was Wonder Bread and cream cheese from the bodega next door – for months. It was tight, but when you're 20 years old, committed and have a strong goal and something to achieve, you do whatever it takes. I showed up to this country, literally, with a bag of clothes – nothing else. So it was like, ‘Okay, let's make this thing happen.’ But I remember those years and the difficulties of getting on my feet in a different country with my smile on my face.”

At first he didn’t know what he’d be working on, only later finding out that it was a Jay-Z album. IRKO ended up securing a credit on the track, The Prelude, which was produced by B-Money. He remembers it like it was yesterday:

"I was tracking the multitrack files out of an MPC into Pro Tools, and the choice of which preamp, compressor and EQ was involved. It was something that I could have done with my eyes – or ears? – closed, yet that was a big step and a major accomplishment. But still I personally didn't know that I was gonna get credited.

"Most of the time the credits are all messed up anyway and the chances of getting credited properly on a big record are very slim, especially for engineers. When the record actually came out, B-Money called me to say my name was in it. I remember jumping on the bed. Sure enough, a few months later, the gold plaque appeared, then the platinum, then the double platinum. It's still in my living room right now,” he smiles. 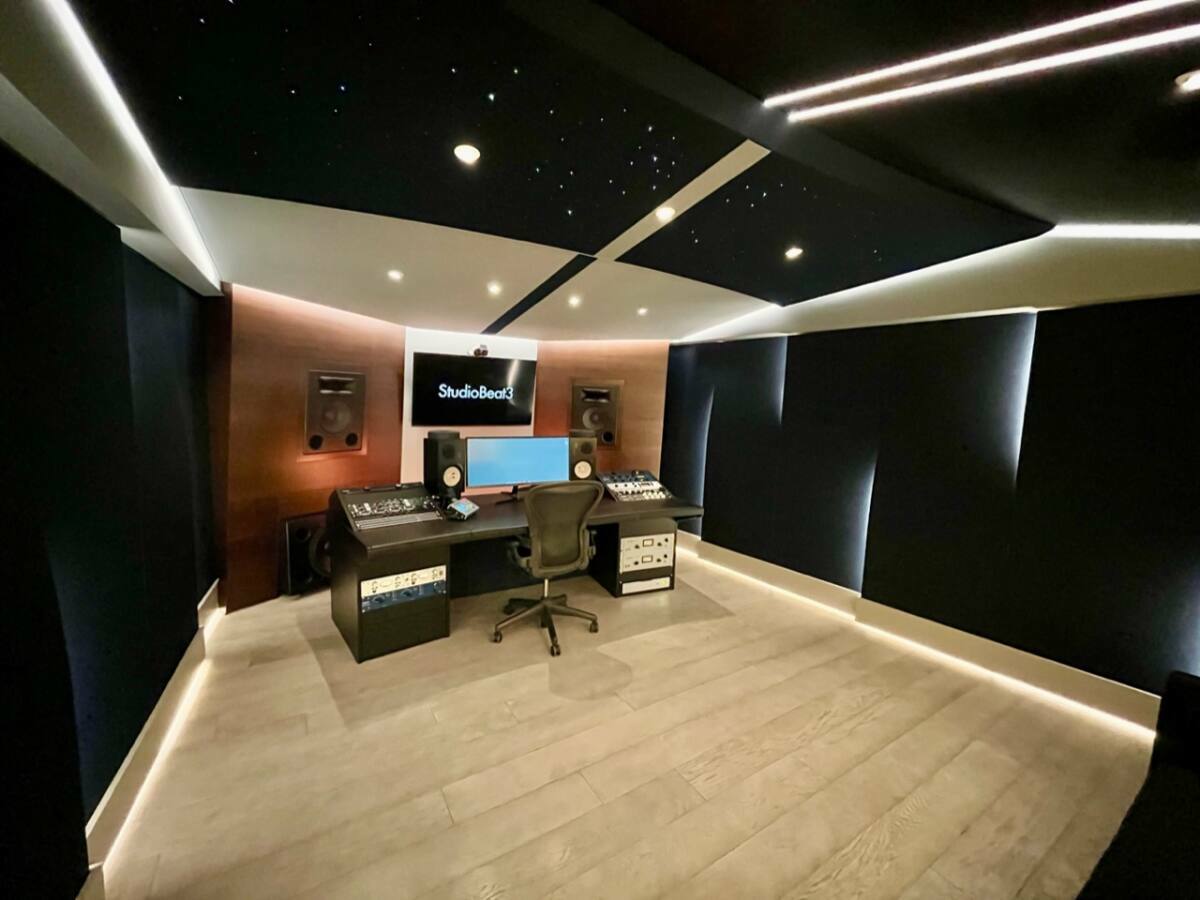 The chances of getting credited properly on a big record are very slim, especially for engineers.

This big step led to others, and IRKO has since worked with artists including The Weeknd, Snoop Dogg, Sia, Jennifer Lopez, Rick Ross, Diddy, David Guetta and Kanye West, including mixing the entirety of Ye’s 10th studio album, Donda.

“It’s basically the snowball effect,” he shrugs modestly. “The proverbial snowball started as a little nugget and then started to grow and became bigger and bigger and bigger. That's kind of how it was, and still is: delivering great work, outstanding conduct and professionalism eventually will lead you to bigger and better places.”

In typical IRKO style, his studio situation went from one extreme to another – “my first studio was in my dad's garage, then the second was a standalone building that was humongous, and then the third one is even better,” he enthuses, gesturing around the room.

StudioBeat2 marked his first big leap into a bigger studio space (it’s currently being upgraded to Dolby Atmos), while StudioBeat3 is under construction at the moment – IRKO regularly shares the studio build’s progress through a series of entertaining YouTube videos.

As for the all important kit working behind the scenes across his complex, IRKO uses Focusrite’s Red 8Line in studio 1, a Red 8Line, RedNet MP8R, RedNet R1, RedNet X2P in studio 2, and a RedNet X2P and a Clarett+ 2Pre in his production suites. It turns out, he and Focusrite go way back. 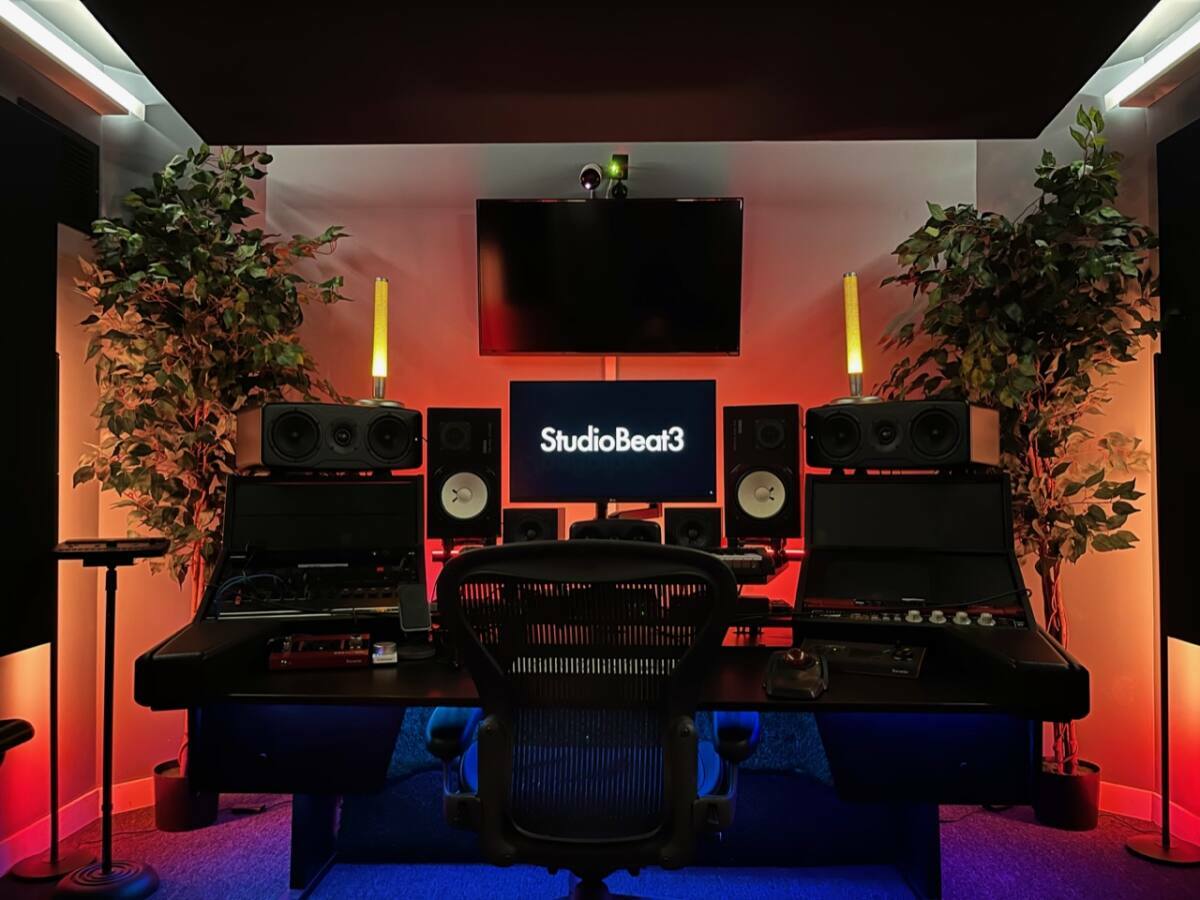 I showed up to this country with a bag of clothes – nothing else.

“In the very first studio in my dad's garage, my very first preamp and compressor that I bought was made by Focusrite with which I did everything – I preamplified my mics and EQed and compressed everything,” he recalls.

“Since then, I've been using their stuff every day. In my previous studio I had three Focusrite sound cards, and then when it was time to build this place, I wanted Focusrite sound cards again because I wanted to be able to have a built-in system in the studios where a guy or girl could just show up with their laptop and they’re good to go and fully operational with everything.

"I needed something that was easy to install in terms of the drivers, and Dante-ready so they can interface their computer with everything else in the whole building: room to room, live room to live room, and booth to booth. Focusrite offered the easiest and highest quality sound cards and allowed us to do all of this, not to mention across the three production rooms we have in the building as well.”

The Red 8Line 58-input, 64-output Thunderbolt 3 audio interface stood out to IRKO right away as something that would be ready for any recording situation he might throw at it:

“What we needed to hear was something that had that duality of having everything digital with Dante, a million channels, and enough analogue channels, because I have a lot of analogue gear here too,” he points out.

“Depending on what the situation calls for – say if you want to go from a microphone in the booth into an analogue preamp, into a compressor into the sound card – then it's very simple. So all we need are some inputs, but how many? That's the question, for instance, do you want to do a full drum set or just a vocal booth where you have maybe 10 analogue tracks?

"We wanted to have something high quality that was flexible enough to be able to do both, and that works all the time – there's never a hiccup or anything like that. Those sound cards, the same ones that we have in both control rooms, operate just like that. They're super simple and everything works all the time. And not to mention even the preamp on the sound cards are very good,” he says, adding that these sound cards should never be overlooked.

“Higher level producers and engineers know that these Focusrite sound cards are nothing to be messing with,” he nods. “They are real tools designed to be used by real people on real records. Stuff that I've mixed and recorded on these sound cards has been heard literally billions of times. It's nothing to sleep on.” 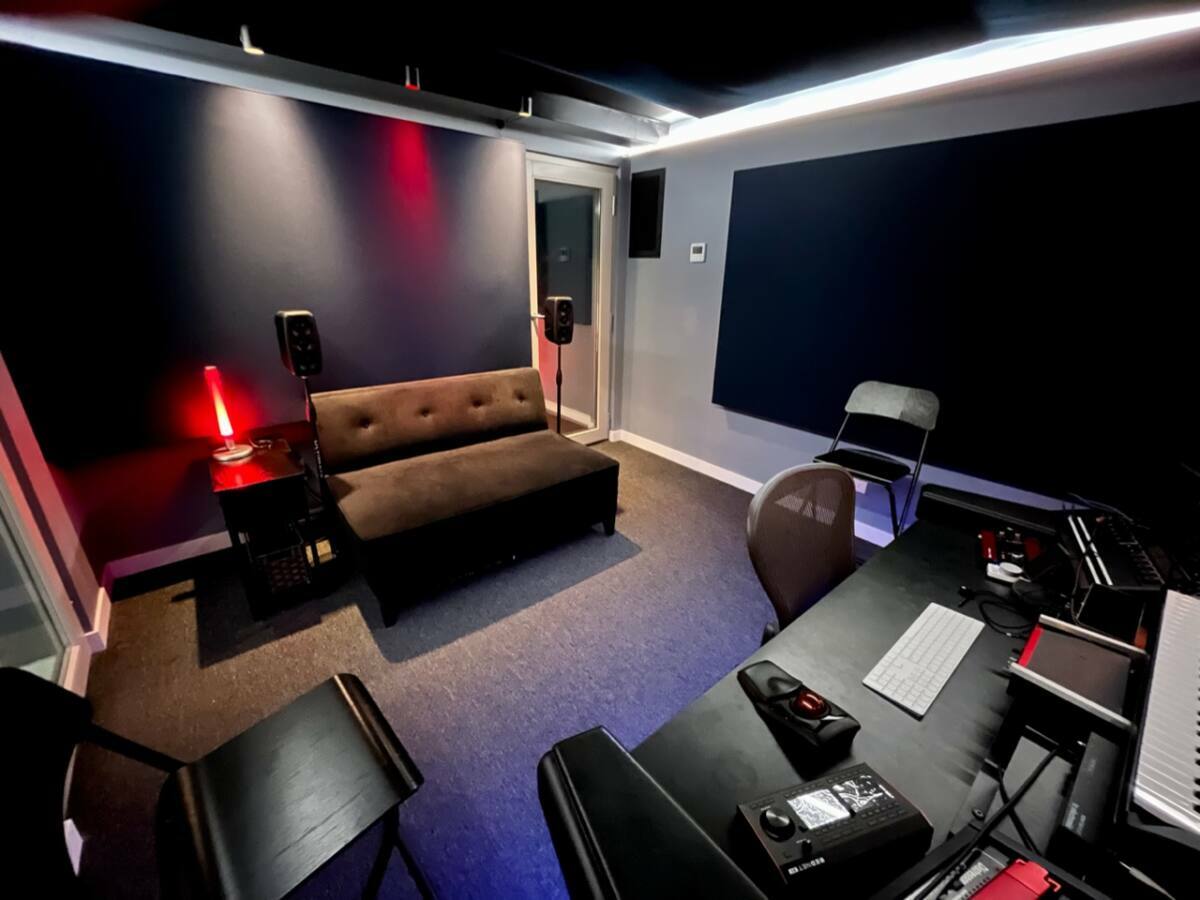 Stuff that I've mixed and recorded on these sound cards has been heard literally billions of times. It's nothing to sleep on.

Meanwhile, IRKO uses the RedNet MP8R eight-channel remote-controlled mic pre and AD interface in studio 2. “The ideal scenario is to have the microphone connected to the preamp in the smallest run ever, because fewer cables means more power, more definition, less noise – it is always better,” he explains.

"Digitally, you can go up a notch, but that information is being transferred to the location where the preamp is, and that's where the notch-up activity happens – without you needing to be there. So the run is still short, but the information of notch-up from notch-down can be sent from a different place. That's why units like that are so smart,” he enthuses.

IRKO shares that he selected the RedNet X2P 2x2 Dante audio interface for stereo monitoring in studio 2 and across his production rooms.

“Again, it’s very simple, just like a USB-driven interface – you can have it on your desktop, but you have all the ability of being interfaced to Dante. So Ethernet in, and you're now in the Dante realm for the whole building. That's very easy to set up and is super high quality. It's got the same converters as the big dog sound cards.”

At the press of a button, you can switch from different modalities in which you can monitor your stuff. It’s super easy and effective

With all his Red audio interfaces it makes sense that he’s using the RedNet R1 desktop remote controller for control of his monitor selection, source selection, as well as factoring in its Dante, Pro Tools HD and Thunderbolt connectivity.

Not forgetting the Clarett+ 2Pre interface which he uses in his production suite upstairs and for any last minute work he needs to do quickly. “I just plug it into my laptop so that I can power the speakers – it's the quickest, easiest USB.”

With that IRKO has to go, as he’s busy working on the upcoming Street Fighter 6 game, in between building StudioBeat3 and updating his progress videos for YouTube – although the last one he published was nine months ago.

“The fact that there are no new episodes means that I'm hard working at actual music,” he grins. “Although no studio or project of this magnitude is ever really finished – there's always something. The sky's the limit for that room!”