Isabelle Banos on music production: "If I've got something on my mind, I'm going to make it happen"

Five years ago, Isabelle Banos found her true calling. Already a member of the badass alternative pop band, Caveboy, the Montreal-based songwriter knew she wanted to produce. She reflects on her production journey and explains what led her to open a studio for women and gender minorities.

Banos was happily binge-watching Netflix miniseries, Maid last year, and on being blown away by the show’s music and soundtrack, was a little sad that none of her band’s (Caveboy) music had been included after getting a sync request six months earlier.

“Maid was right up my alley. It instantly hooked me,” says an instantly friendly Banos from her home in Montreal, Canada, where she’s joined by her sometimes vocal rescue dog, Bruce.

“I was really enjoying it and I was really drawn to the music that they used, to the point where I was a little jealous! I was super bummed that none of Caveboy’s music was able to make it into the show. I was like, ‘Man, this would have been such a great sync placement!’ I kid you not – the next episode that I watched, sure enough, our song Something Like Summer pops up.

"I nearly had a heart attack! I had completely forgotten about the sync request; I don’t know if I was busy or if because of the pandemic my brain was half working, but for some reason I didn't clock that this was the show.

"The scene popped up and I listened to the background music. I'm like, ‘Wait a minute. I know this song. I made this song’. It was like an out of body experience. It was so bizarre. It's certainly our happiest, most joyful song. We definitely write in a minor key more often,” she grins.

Making up the rest of Caveboy are Mint Bensimon on lead vocals, guitar and synths and Lana Cooney on drums, percussion and backing vocals, while Banos is on synths, bass and backing vocals. They met at CEGEP, a publicly funded college in Canada, and never looked back.

“I met Lana there. I saw this girl with drumsticks poking out of her backpack, and I was like, ‘Okay, I see you. Please be my friend’. We started making music and jamming in her garage.

"Our first gig was her sister's bar mitzvah – very rock and roll! We got a taste for performing, we got the bug. Eventually Mint joined the band and the three of us just clicked.” 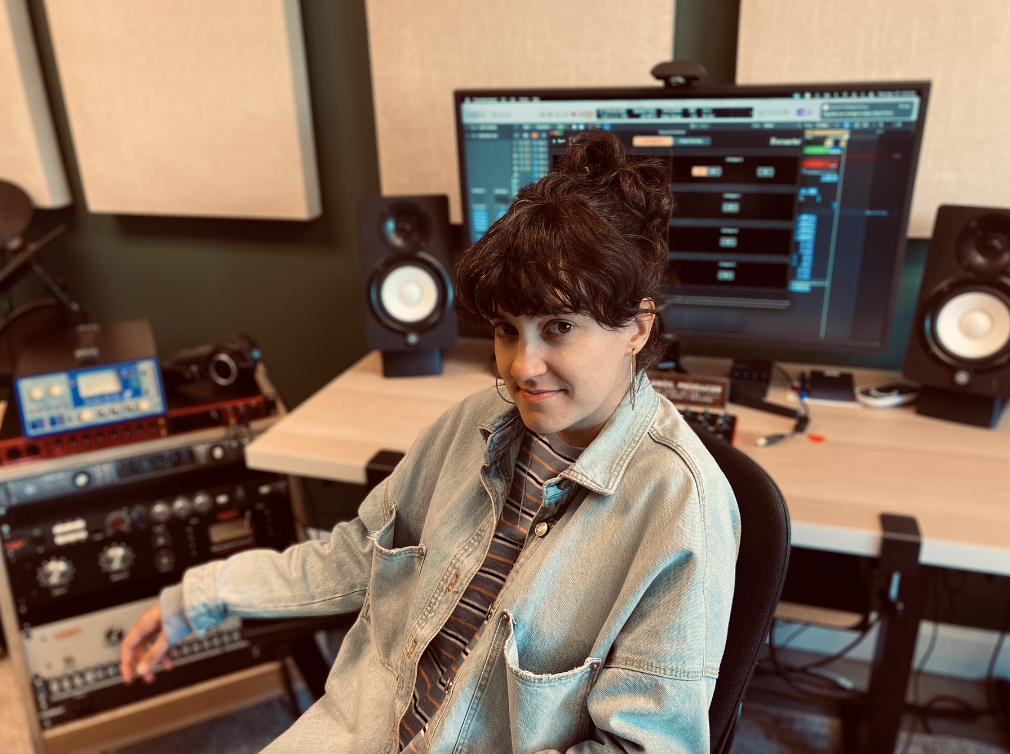 I've tried to write songs on my own for years, but they're never as great as when Caveboy get together.

When it comes to songwriting duties, the band all pitch in: “We all write equally,” she nods. “It’s such an amazing opportunity to get different tastes and different flavors into the songwriting process. I've tried to write songs on my own for years, and I think they're good, but they're never as great as when the three of us get together.”

Five years ago Banos participated in her very first song camp as a topliner, which, although she loved the experience, made her realise that her true passion lay in producing.

Fast forward to 2020, and Music Publishers Canada named her among the top eight emerging female producers in Canada to be welcomed into its Women in the Studio accelerator program.

“I was always the member of the band who was most interested in that side of things,” she reflects.

“I was always really intrigued and passionate about taking that control into my own hands. I'm the type that if I've got something on my mind, I'm going to make it happen. I would bring up Logic on my laptop and get our demos going.

"But where we're at now, I've got a studio space where I'm equipped for everything other than for drums, so we're able to get a lot done together, to the point where with our record, we're going to try to take it as far as possible on our own to potentially be credited as self produced, and then get some outside ears on it from a mixer and a mastering engineer.”

Being a part of the year-long Women in the Studio accelerator program really opened doors for Banos, which is is eternally grateful for:

“That gave me a newfound drive to take production and engineering to the next level,” she enthuses.

“It allowed me to skyrocket over the past couple of years, to the point where it's no longer necessarily a side hustle – it's really a balance between being an artist and being a producer/ engineer, and I'm really proud of it.

"I put a lot of work and time into it. It's really exciting to see that I can truly live off of music, which is super rare for so many people. So I don't take it lightly. It's been a journey!” 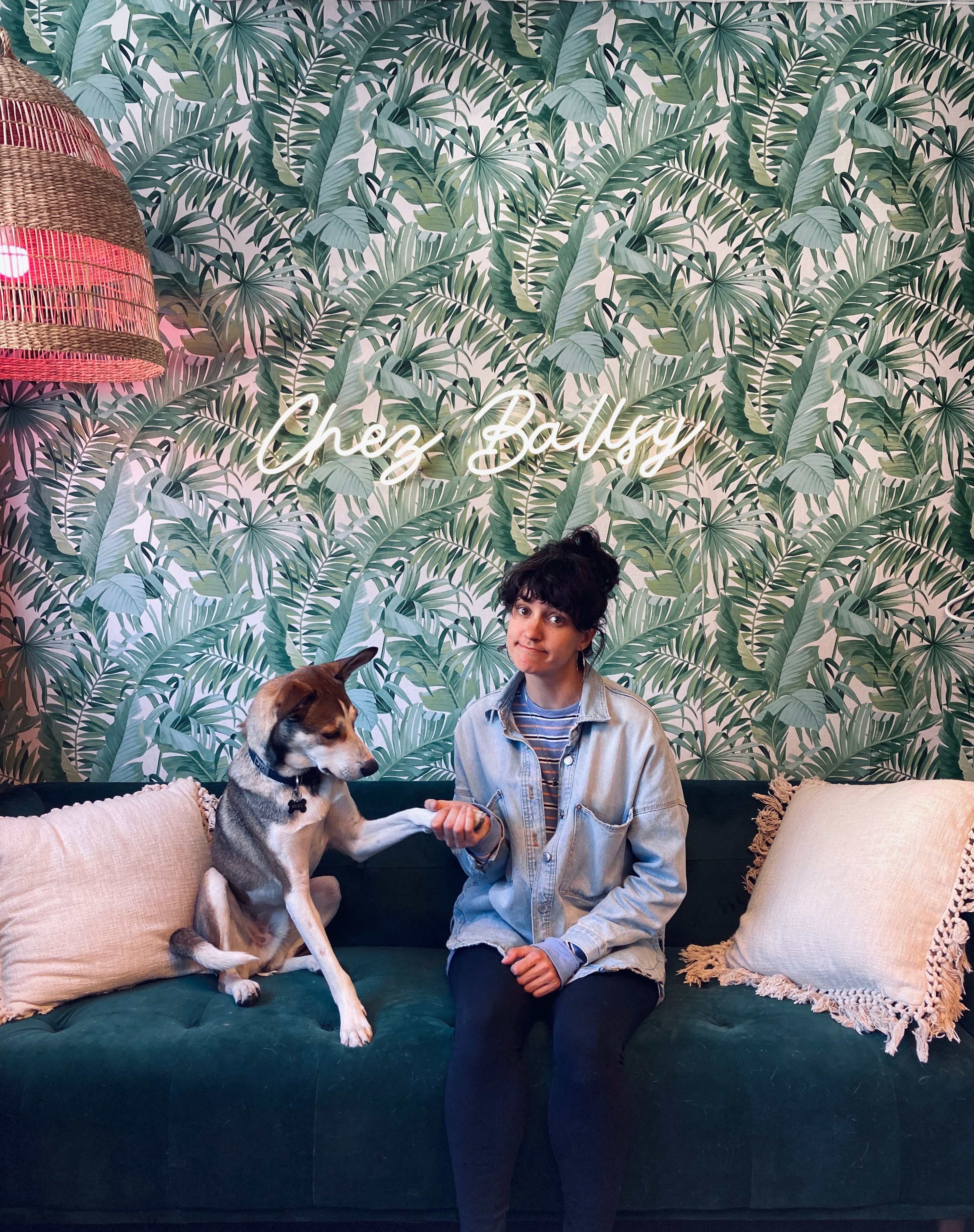 Seeing firsthand how male dominated it is and how few women there are, I wanted to do my part to try to help change that.

In April 2021, Banos opened her own commercial studio named Chez Ballsy, which is a space created by and for women and gender minorities.

“Being a woman in the studio, being part of Caveboy and my experiences as a woman in the music industry for over 10 years were a huge factor creating this,” she says on her reasons for starting the studio.

"I studied to become a high school teacher and I didn't end up pursuing it. The traditional classroom wasn't necessarily where I saw myself, but I have continued to do all that I can in educating and sharing knowledge in music, especially for women and gender minorities.

“I've had so much fun along my journey with recording and producing music,” she continues.

“Seeing firsthand how male dominated it is and how few women there are, I wanted to do my part to try to help change that. This space was always going to be a place that was welcoming, inviting and as safe as I could possibly make it for anybody to be creative in, to be vulnerable in, to be silly and weird in – just anyone who needs to have a space to create without having to worry about how someone's going to talk to them, or hit on them, or dumb them down.

"I feel so proud and so grateful to be able to do this every day.” 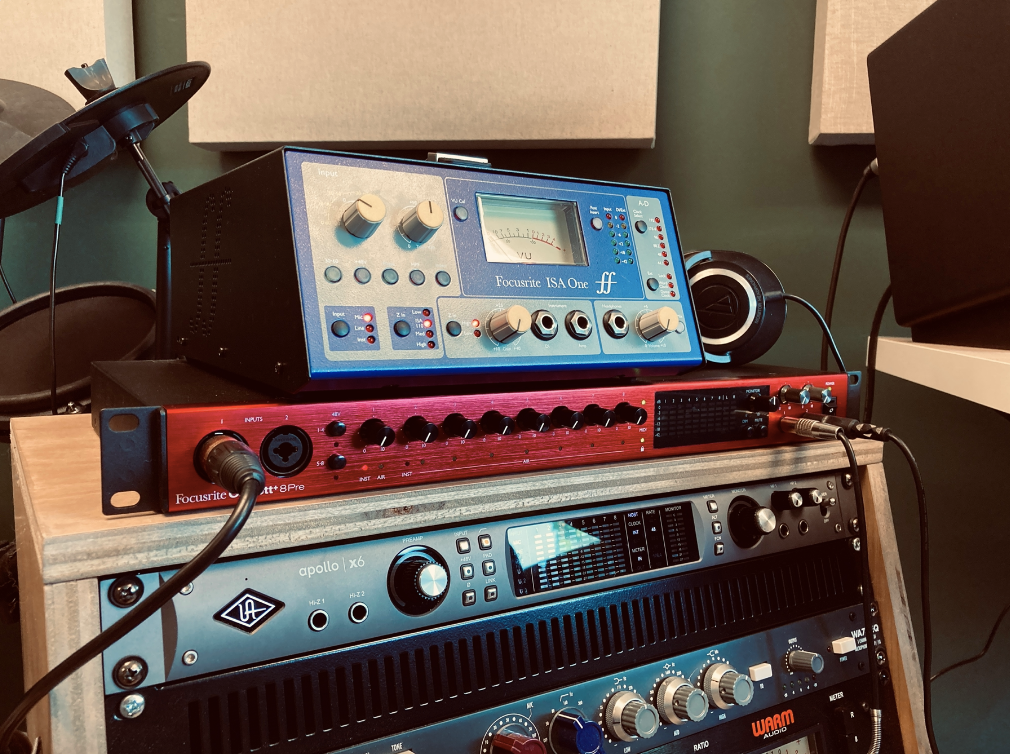 With Clarett+ 8Pre’s All-analogue Air function, I can have that extra heat and extra clarity on every one of those channels, which is such a luxury.

Banos tells Headliner she loves “nerding out”, and happily delves into her new favourite Focusrite kit at Chez Ballsy, where she’s using an ISA One and a Clarett+ 8Pre interface.

“The Scarlett was my first interface and I used it for years. It's so solid, does everything you need it to and it was always such a positive experience. Caveboy also used it on stage for years. Most recently, I got the ISA One and the Clarett+ 8Pre pre, which was super fun. I felt very fancy!

"Over the past few months, I've been able to properly integrate them into my workflow. I'm running everything through that ISA, and it's so great. I wish it had 20 inputs! It's so fantastic and it’s so easy and seamless to use. It's very much: you plug it in and it sounds great. I love being able to switch impedances, and I will never claim to fully understand how electricity works, but those switches for the impedance on the ISA One are just so easy to use!

Banos is happy to report that the Clarett+ 8Pre’s 18 inputs and 20 outputs are more than enough for her requirements:

“Definitely!” she laughs. “I'm not able to accommodate drums here at this point, but even if I was, I feel like I could make it work with this. For the mics that I have for the things that I'm working on, it's absolutely perfect.

"And what's super fun about it is the All-analogue Air function, which is fantastic. Just with that button, it's recreating the ISA One sound, so I really have the best of both worlds. I can have that extra heat and extra clarity on every one of those channels, which is such a luxury. To be able to plug my synths into it and to get a little extra something out of it is really amazing. It's hard for me to not turn on the Air function!

“This is such an amazing, fun job that I get to do, I want to enjoy every second of it,” she considers, smiling suddenly. “And it's reinvigorating that love for the gig. So I'm really, really enjoying that.”