‘It’s my greatest source of pride’: Geoff Shreeves on working with Nordoff Robbins

One of the most respected and recognisable voices in the world of football, Geoff Shreeves has spoken to Headliner about his 25-year partnership with music therapy charity Nordoff Robbins, its upcoming Legends of Football fundraising event on October 3, and why his ongoing role with the organisation is his “greatest source of pride”.

Since launching in the early ‘90s, the annual Legends of Football ceremony has raised £8.5 million to date for Nordoff Robbins, the UK’s largest music therapy charity. The organisation and its music therapists use the power of music to connect with some of the most isolated people in society - working with children and adults affected by life-limiting illness such as dementia, mental health issues and learning disabilities, including autism and physical disability.

Each year, Legends of Football inducts a new individual to its Hall of Fame, while recognising the achievements of many other figures from across the sport. In this year’s edition of the event, held once again at London’s Grosvenor House, manager of the men’s England team, Gareth Southgate, will be inducted the aforementioned Hall of Fame, joining such footballing luminaries as Steven Gerrard, Frank Lampard, Eric Cantona, Alex Ferguson, Arsene Wenger and many others.

The evening will also feature live music from James Bay, as well as a fundraising auction, which will see a wide range of football memorabilia, tickets, and experiences auctioned on the night with all proceeds going to Nordoff Robbins.

Since Legends of Football’s inception, Geoff Shreeves has not only hosted the event but has taken an active role in helping raise money for and awareness of Nordoff Robbins’ life-changing work.

Headliner joined Shreeves over Zoom for a chat about how he came to be involved with the charity, his personal experiences of seeing the power of music therapy in action, and his pride at being associated with the organisation…

How did Legends of Football begin, and how did you become involved with Nordoff Robbins?

Funnily enough I’ve just written a book called Cheers, Geoff, which is coming out in October – shameless self-publicity there! – and when I was reflecting back, I actually dedicated a whole chapter to Legends of Football because it has been such a big part of my life. I think I can probably say, even though I’m very proud of many of the things I’ve been lucky enough to be involved in, Legends of Football is, outside of my family, my greatest source of pride. It’s an incredible thing I’ve been involved in for over two decades now.

It all started way back in the early ‘90s when the record retailing sector and HMV were having something of a crisis of conscience where Nordoff Robbins was concerned. Nordoff Robbins is a music therapy charity and is well known by everyone in the music industry. So, three executives from HMV went to a bog-standard football dinner at Enfield Town Football Club. It was an enjoyable evening and raised a few bob. And they said, ‘why don’t we do something like this, and we’ll give the proceeds to Nordoff Robbins’? So they dipped their toe in the water, hired the Grosvenor House Hotel in London, and hired the late great Jimmy Greaves as a speaker. But they were nervous, so they partitioned off half of the room and limited it to 500 people, so it didn’t lose too much money if it didn’t go well. Well, fast forward to where we are now, and every year at the dinner we honour somebody who has achieved great things in football.

It started with the likes of the great John Charles, Stanley Matthews, then we had the likes of Bobby Charlton, Eric Cantona, Alex Ferguson, Pele, Alan Shearer, Arsene Wenger, Steven Gerrard, Frank Lampard. We’ve had so many of the greats of football. And we also celebrate things like players who have made over 500 Premier League appearances, greatest goals, and to date we have raised and donated to Nordoff Robbins in excess of £8 million. Put very simply, it’s a football dunner with lots of entertainment, with live music on the night. We’ve had Stereophonics, Roger Daltrey, Russell Watson, Mick Hucknell, Rudimental. It’s basically music meets football and the room is full of people from both the music and football industries. It’s not for profit and all the money goes to Nordoff Robbins. 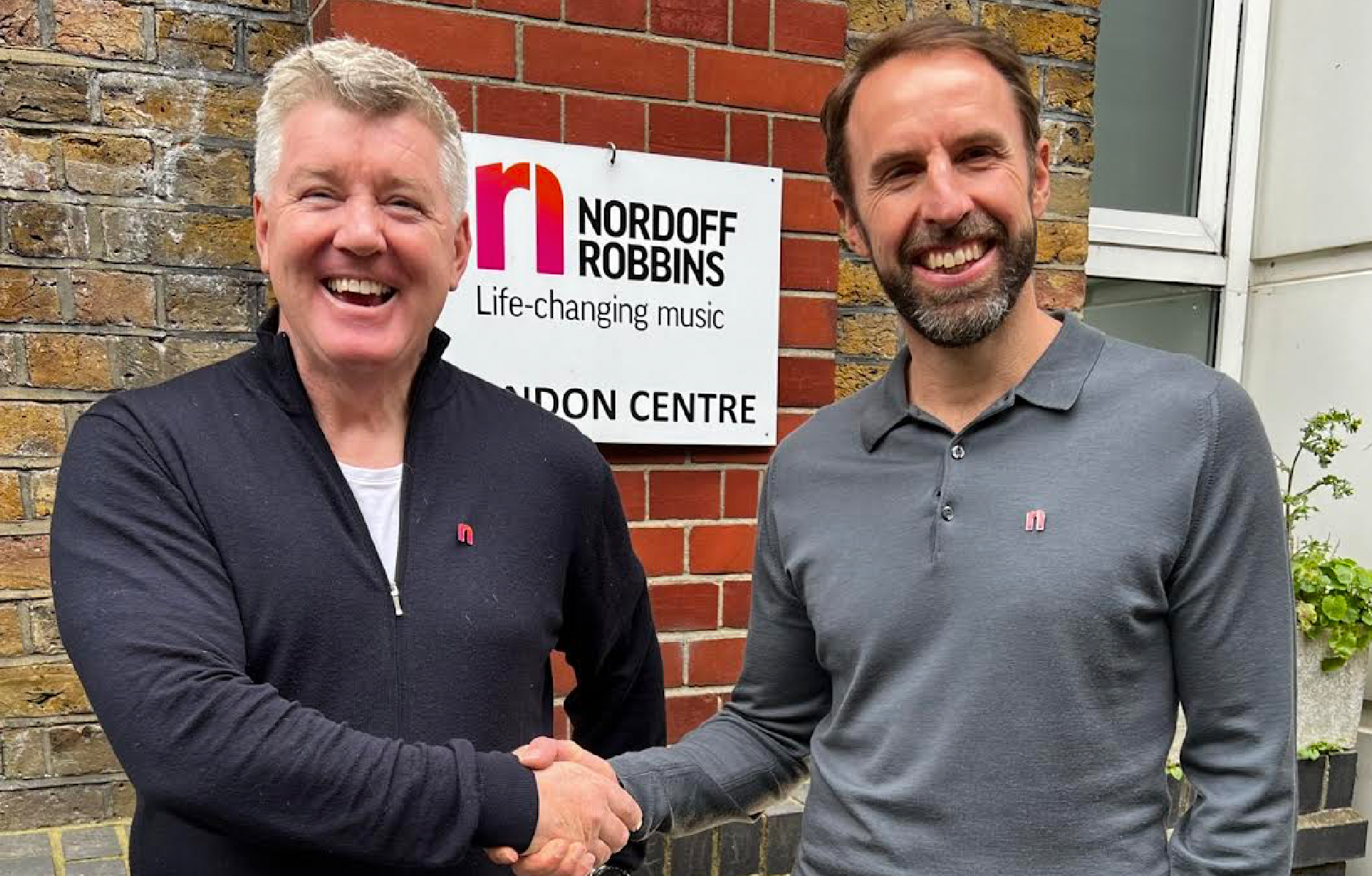 The breakthrough you see is absolutely extraordinary. Geoff Shreeves

What was your initial response to the work Nordoff Robbins does when you first got involved?

Sometimes it’s difficult to understand the concept of music therapy. The simplest way I can describe it is that Nordoff Robbins helps support a whole variety of people who are disadvantaged in life. They could be autistic, they could have dementia, they could be suffering depression, coming back from a serious brain injury. Music reaches people in a way so that they can communicate like they wouldn’t be able to otherwise. Take for example autism. Autistic children can often find it very hard to engage and can be non-verbal. So, realistically they are cut off from life.

Now, the extraordinary work of Nordoff Robbins found by accident one day that by tapping a spoon – this was back in the ‘50s – that a child who had not previously communicated picked something up repeated that pattern. That child made contact for the first time. It’s a Eureka moment. They have essentially taken that principle and developed it over several decades. And seeing what it does makes the hair on my neck stand up. It’s absolutely extraordinary, the breakthrough that you see.

This year we took Gareth Southgate to the Nordoff Robbins centre in Highgate and there was a young boy called Billy. He was about 18, arrived with his mum and was really shy - no eye contact, no interaction, and it was a very difficult situation. He went in a room and, with his music therapist, this boy was transformed. You wouldn’t have believed that it was the same boy we’d seen outside. He was outgoing, rhythmic, joining in, singing, releasing emotion. Absolutely incredible.

I’ve seen videos of a young child walking with an old-fashioned stereo on her shoulder on full volume and she is screaming at full volume. What she is trying to do – because of her autism – is block out the noise that she hears in her head all the time. White noise, 24/7. It’s a serious and horrendous situation for her and her family. Six months later you see the same girl playing the violin. It is just extraordinary, the power of it. For instance, I didn’t know that the one part of the brain that isn’t affected by dementia is the part the processes music. So, you could have a person who is suffering from dementia, can’t engage with their family, doesn’t recognise or remember people, and you take them to one of these sessions and they’ll play some of the old songs they used to know or sing with their friends and they’ll know every single word. It’s staggering.

How do the Legends of Football Hall of Fame inductees respond when they first attend one of those sessions?

It’s incredible. When I look back, I think of people like Pele who came along, who is a very talented musician. He had a ukulele and was able to play, so to see the back and forth was incredible. Arsene Wenger, who is not a demonstrably emotional man, couldn’t get over it. I remember Fank Lampard went along and saw this girl called Betsy. Now Frank, by his own admission, is not very musical and not a great singer, but he got carried along by Betsy. She was about five or six at the time and he said she not only lit up the room, she took control of it. And she took Frank on the journey, and he was blown away. Same as Steve Gerrard. He absolutely loved it. They are particularly humbled by it and they understand it. Gareth himself was amazed by what it does and how it works. Once they see that, they want to get on board and help support the cause.

Do you see that connection between the music and football communities continuing to grow?

It’s always been there. There has always been a connection between football and music. Most footballers like music and most musicians like football. In my day job with Sky Sports, I have interviewed loads of musicians, and because they are talking about something they love, all of a sudden they become even more engaged and they can’t wait to talk about it. It’s a release from talking about their day job. And the same goes the other way around.

What are your thoughts on Gareth Southgate being inducted to the Hall of Fame at this year’s Legends of Football?

Gareth was first and foremost a reluctant recipient. He said, “why? I had a relatively modest playing career and as England manager haven’t won anything”. Which is typical Gareth. I said that the feeling amongst our committee is that he’s the only men’s manager who has taken us to two semi-finals and a final, so he’s only bettered by Alf Ramsey who won the World Cup in 1966. But it’s very important to say that this award is not just in recognition of how he has re-energised the England team; he has galvanised them and he’s made the team far more identifiable and approachable, and he’s reconnected with the fans. And for the players he's maybe made that shirt a little bit lighter to wear, because there was a period when it wasn’t going well for England and the team was getting a lot of criticism in the press. It’s everything he has done in and around the team. That is why he’s been honoured.