Dave, Ed Sheeran, The Cure and Sam Fender were among the big winners at the 2022 Ivor Novello Awards, which took place at Grosvenor House, London, on Thursday May 19.

In the 67th year of The Ivors, 21 songwriters and composers collected Ivor Novello Awards across 14 categories, in recognition of outstanding achievements in songwriting and composing for screen.

This year’s Songwriter of the Year accolade was awarded to rapper Dave. Having dropped the surprise Top 10 single Titanium in 2021, Dave’s second album We’re All Alone In This Together then hit number one in the UK. It spawned three simultaneous Top 10 singles – Clash, featuring Stormzy, Verdansk and In The Fire.

With a catalogue of over 140 songs and more than 80 million record sales, the Special International Award with Apple Music celebrated the global impact and songwriting achievements of Columbian superstar Shakira. 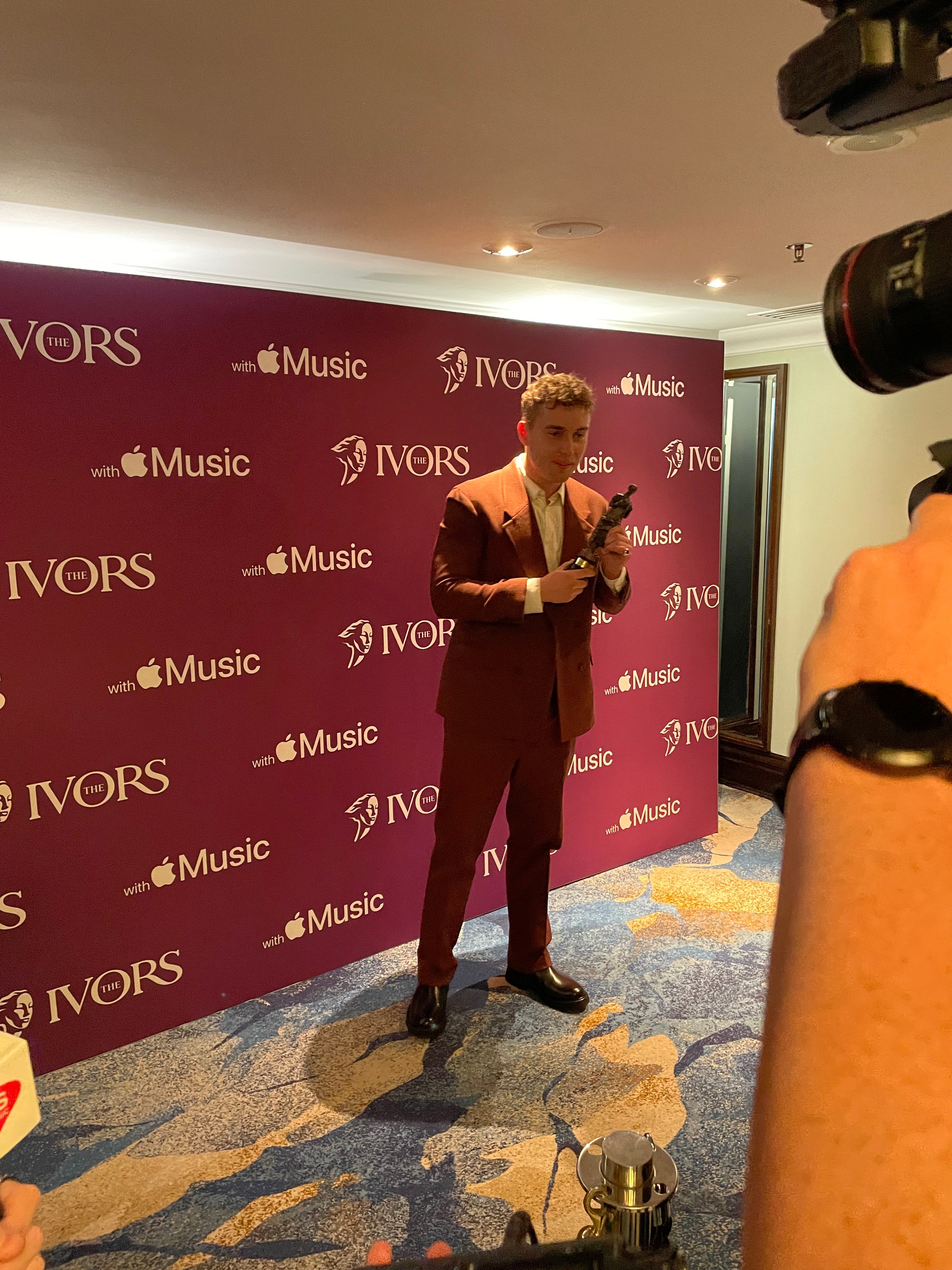 Ed Sheeran, Fred again.. and Johnny McDaid, together won PRS for Music Most Performed Work for their collaboration on the UK’s biggest song of 2021, Bad Habits. This is Ed Sheeran’s fifth Ivor Novello Award, having won this category in 2018, along with Johnny McDaid for Shape of You, Best Song Musically and Lyrically back in 2012 for The A Team and Songwriter of the Year twice. It is songwriter and producer Fred again..’s first Ivor Novello Award.

Previous nominee Sam Fender took home his first Ivor Novello Award after winning Best Song Musically and Lyrically, for his hit Seventeen Going Under. The song chronicles Fender’s life at the age of 17 and the challenges he and his mother faced. Speaking to Headliner at the Ivors ceremony, Fender offered the following advice to new artists. "Write. Write furiously. Regardless of where you're from, if a song is really good, people will hear it. If people can relate to it then that’s what comes through. Just write relentlessly and never stop."

He also explained why the Ivors is the most coveted award he has picked up to date, having recently scooped accolades at The BRITS and the NME Awards, whilst also paying tribute to his manager: "This is a really special award with it being creatives who decide it. It really means a lot. I know how snobby creatives can be!

“I’m very lucky because there aren't many of them [points to his manager] in the world. We’re friends as much as a business relationship, and that really helps. We look after each other, and he looks after me emotionally as well as professionally. You have to find someone who not just loves your stuff but likes and respects you as a person as well."

The Rising Star Award with Apple Music was awarded to singer-songwriter Naomi Kimpenu, whose debut EP Prelude was released last year. She is the third consecutive female songwriter to pick up the award since its inception in 2020.

“It’s crazy," she told Headliner. "I literally feel like I’m on cloud 27, because nine isn’t high enough! It’s such an amazing moment for me. I’ve been working woth Shaznay Lewis as my mentor - yesterday we were at Abbey Road writing together. It’s great having someone beside me who has been there, done that and can offer that guidance.

“The Ivors are so special because they are looking purely at the quality of my writing and songs, rather than just streaming numbers or what my videos are like. It’s really amazing to win this as my first ever award."

Pink Noise, performed and written by Laura Mvula with Dann Hume, won Best Album. Pink Noise is described as an album borne out of both intense struggles, positive realisations, and an exploration of personal and professional breakups. 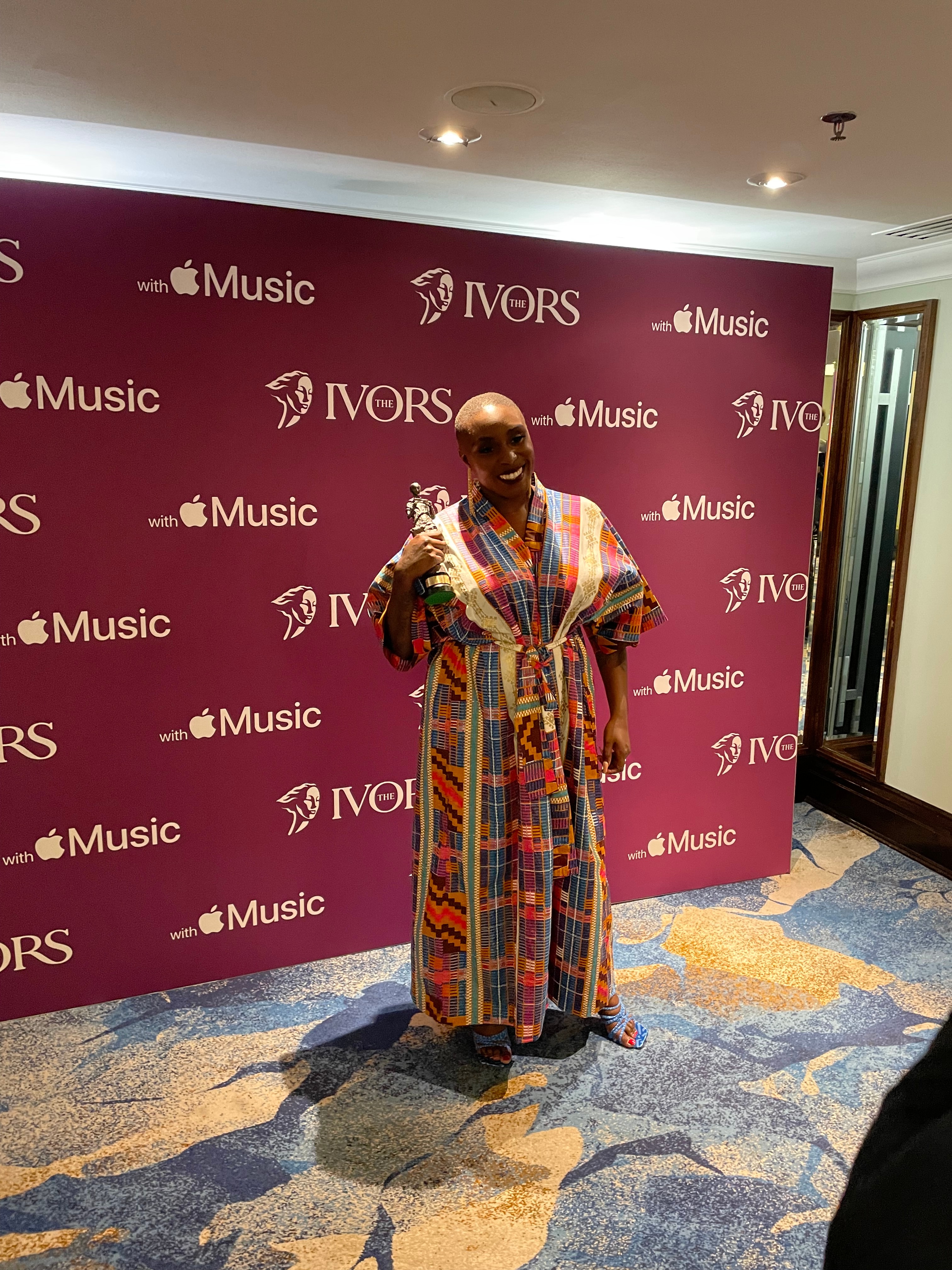 Speaking to Headliner, Mvula explained why winning the Best Album Award was so important to her: “It’s a pretty bold statement in this here land! For me, it’s the recognition of that body of work; of your spirit; of your commitment to your craft. There is no higher praise than that. Especially in a singles market. And that’s fine. A lot of my friends are single market punters and I’m learning all the time. People digest music at a really fast rate. That’s a challenge I thrive on. When I put out an album now, it needs to be something people can hear and connect with immediately."

Peter Gabriel received Fellowship of The Ivors Academy in recognition of his outstanding contributions as a musician, innovator, humanitarian and songwriter. Gabriel has previously won Ivor Novello Awards for Don’t Give Up in 1987, for his Outstanding Contribution to British Music as a founding member of Genesis in 1983 and was recognised with a Lifetime Achievement award in 2007. 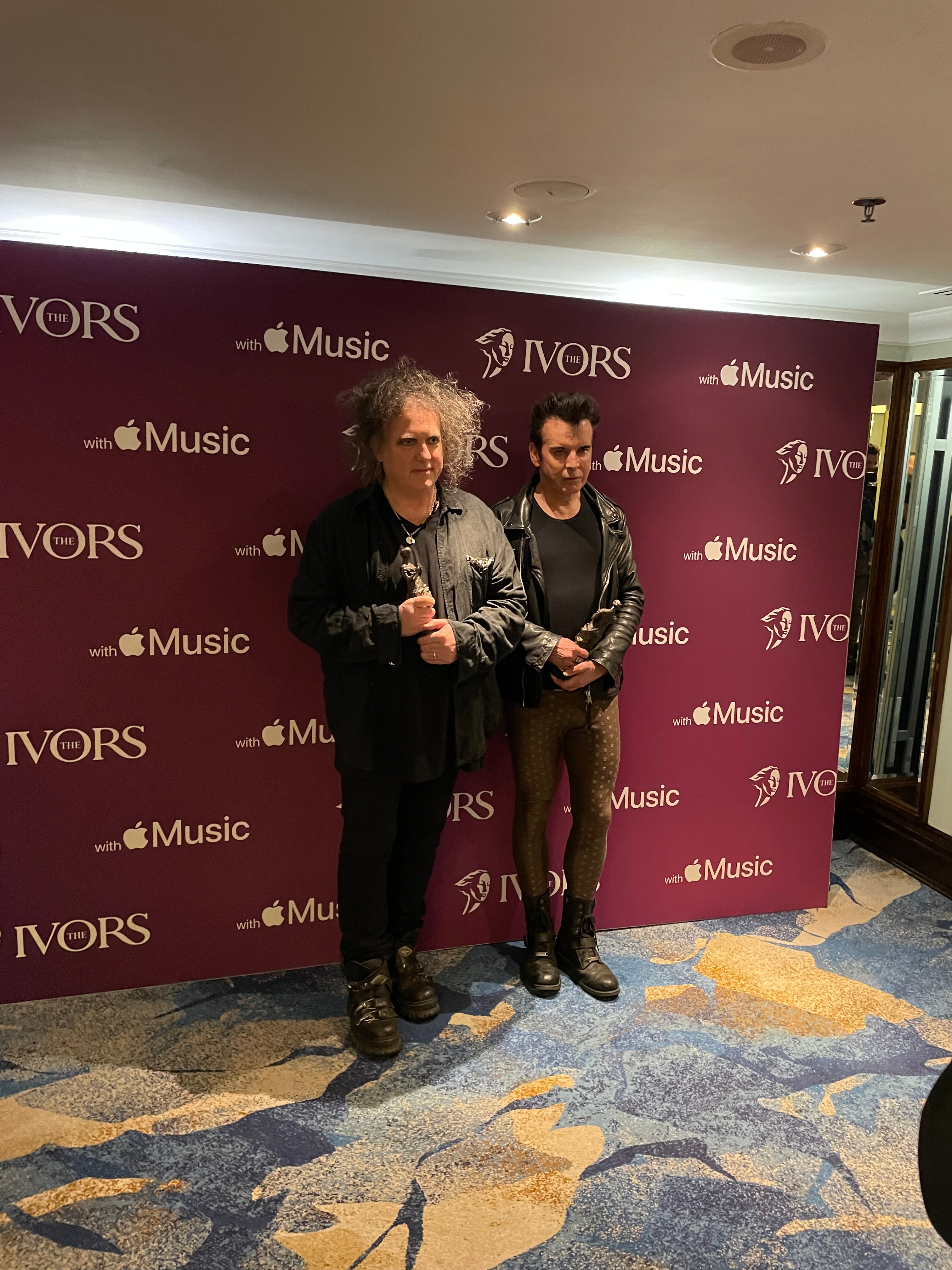 The PRS for Music Icon Award was presented to The Cure’s Robert Smith and Simon Gallup for their songwriting achievements spanning over 40 years.

“It’s a strange one," Smith told Headliner. "It felt weird leaving the other three at the table. For me it’s really important that Simon is up there with me. He's so overlooked it’s criminal. He’s been there pretty much the whole time.

“The thing that strikes me about a lot of the songwriting awards today is that there are teams of songwriters - that never existed when we were young. You used to write songs because you felt you wanted to say something, whereas now I have this horrible nagging feeling sometimes that there are people sitting in a room putting things together that tick boxes... and that, I suppose, is why I have disengaged a bit. There is so much great music that’s been made over the years, and will be made over the years, but even saying that I turn into a critic."

As for how his and Gallup's approach to songwriting has changed over the years, Smith said: “Simon still does it all on cassette! Between us we have demos and we go back and forth, but ultimately, because I write the words, I decide which songs are going to progress and which ones aren’t. But usually with hindsight I pick the wrong songs. I just finished the The Wish remasters and that’s coming out in a couple of months, and I was going through all the old demos for it and there were so many of his demos that never got past that stage and just remained instrumental purely because I couldn’t think of any words for them. And it’s really sad because some of them are great, so they are all coming out as instrumentals. That’s the same every time we do anything, there’s always loads and loads of music and a lot of it is Simon’s, but I run out of words."

Meanwhile, Paul Heaton was awarded Outstanding Song Collection for his work with The Housemartins through to The Beautiful South and his current collaboration with Jacqui Abbott.

"It’s lovely to win this award at this age," Heaton told Headliner. "I think If I’d won it right at the height of my fame it would have been seen as just what you get at that age with success, but this is recognised over a series of albums and a history, so it’s really nice."

Commenting on his path into songwriting and The Ivors' TheWRD initiative launched at the ceremony, he continued: "I left school without any qualifications and went straight into an office as a teaboy, where I worked for three years. But for those three years I was writing, things like Happy Hour and songs about office politics and stuff like that. For the last three or four months there, I was trying to hand my notice in but I just didn't have the financial security to do it, and I knew I was starting to develop as a songwriter. I’m my own worst critic, but I wrote a couple where I knew they were proper songs. So someone in that situation, if they are given the right support… I nearly made the mistake of staying there, and if I had I’d probably still be there now. My director at the company said to me when I handed in my notice ‘I think you’re stupid’. I said, ‘well, I think I should go into music, when I’m making music it makes me happy’. But he said, ‘you’re stupid, you’ve got a good life being a teaboy in the accounts’. He wasn't being nasty, he was just being realistic. But I ignored him and organisations like TheWRD that The Ivors is setting up could just split the difference for somebody."

Also announced at the ceremony was the retirement of long-time ceremony host Paul Gambaccini. He hosted his first Ivor Novello Award ceremony in 1988 and has presented the awards every year since, only missing 2020 when the winners were announced online. In recognition of this, Academy Fellow Joan Armatrading presented him with a unique statuette to acknowledge his contribution to the awards. The Academy also announced that Lauren Laverne will be taking over hosting duties in 2023.

Shaznay Lewis, Ivor Novello Award winner and judge for The Ivors, said: “I’m absolutely thrilled for this year’s winners, who have joined an ever-expanding list of legendary songwriters and screen composers. It is a privilege to experience such an immensely powerful, emotive and eclectic range of music. Huge congratulations to everyone who took home awards, and every single songwriter and composer nominated.”

I Love You, I Hate You

published in the UK by Universal Music Publishing

The World To Come

published in the UK by Wise Music Group

Marvel’s Guardians of the Galaxy

Written and performed by Sam Fender

published in the UK by Kobalt Music Publishing

PRS for Music Most Performed Work

Songwriter of the Year