Jasmine Bailey on opening up through song: “I choose what I share, & that has been really liberating”

Pasadena-based singer-songwriter Jasmine Bailey opens up about overcoming shyness to become a gigging musician and reveals how a burden has been lifted by revealing a very personal side of herself through song.

What are your early musical influences?

My parents aren't musicians or anything like that; they both were graphic designers and visual artists when I was a kid, so they were very encouraging of my interests in art, visual art and in music.

My dad listened to a lot of late ‘60s and ‘70s rock, so I grew up on Led Zeppelin and The Beatles. My mum was more into smooth jazz, which was my soft intro into jazz.

I also listened to a tonne of West Coast, hip hop and R&B because that was also really big in the 90s, so Lauryn Hill and TLC – there were a lot of different combinations going on there! As I've got older, I've tried to listen to everything.

When you started to take an interest in songwriting, who did you look up to?

The lead singer-songwriter of the band, Fleet Foxes – Robin Pecknold was a very early influence for me. I had a really big ‘60s phase too. I was really into Bob Dylan, Joni Mitchell, Joan Baez, and they're singing a lot of traditional English folk songs.

I was really inspired by a lot of the singer-songwriters out of the ‘60s who were writing about political and social things. Nai Palm of Hiatus Kaiyote is one of my really big inspirations as a lyricist, and just in her phrasing and deliveries in her songs.

Where did your interest in writing your own songs start?

I was always really interested in writing. I have kept a journal since I was six years old, I swear! I always wrote; that was something I loved to do.

I had an interest in singing, but I was a very shy kid, so singing was something that didn't really come easily to me at first, just because of how visible you have to be when you do it. So for a long time, I was just writing songs. In high school one of my best friends encouraged me to join the choir with her, and I was like, ‘Okay, since you're in it, it'll be fun; I'll do that with you’.

That definitely gave me the foundation for some of my basic music theory. Also when you're singing with 20-plus other people, it's so magical.

That was a really big turning point in terms of confidence for me to sing, and I eventually was a guitar player in a jazz band in high school, and then I started taking college-level music theory courses while I was still in school.

A lot of things started gelling when I was about 16 because I had some really amazing friends who really encouraged me to be brave, and I've been obsessed ever since. 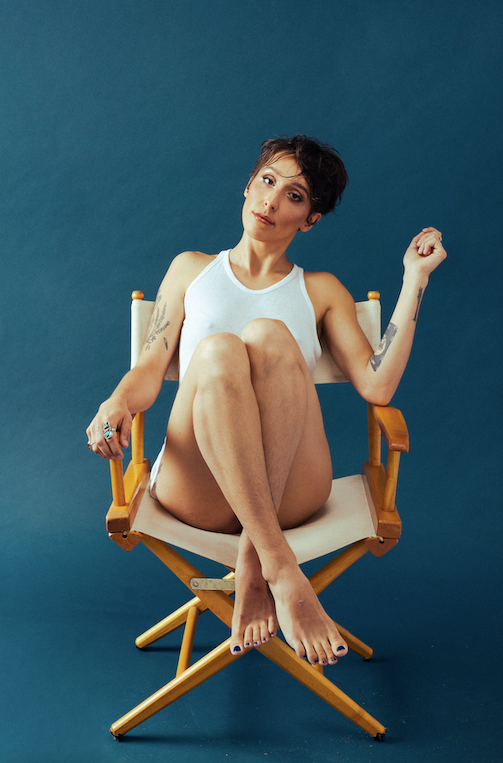 I was a very shy kid, so singing was something that didn't really come easily to me at first.

How did you continue to step out of your comfort zone in order to become the singer and performer you are today?

I was probably about 17 when I went to my first open mic, and I played an original song. I remember I was shaking before it. But honestly, as soon as I graduated high school, I really was determined to jump immediately into music and to really push myself to grow in my performance skills and my confidence.

I started hitting up every open mic, and I was going to open jams and I was booking gigs as a solo artist. Something in me was really determined to push past that shyness and that insecurity and dive right in.

It slowly evolved into me being a full time performing musician. As I grow as a person, so does my approach to performing and my perspective on it. I don't think I’ll ever get used to it, because I'm always trying to discover something new within it. I'm always trying to challenge myself in a new way or bring a new element to the performance.

What tends to inspire your songs, and has that changed over the years?

Initially, I was writing from personal experiences. I'm really interested in telling stories, and as I've got a little bit more comfortable sharing personal ones, I've been trying to expand on what kind of stories I can tell besides just my own.

So lately, I have been inspired to write in a broader way, that's not necessarily about one moment or one experience, but rather like a feeling that I think a lot of people share, or bigger themes that affect a lot of people in their life, like the transformations of the self, and death, loss, grief and nature – things that I feel a lot of people can relate to besides just one very specific, personal experience.

In the beginning, I was very much an emotional, cathartic writer. Things are still really authentic and raw for me, but I've been trying to take a little bit more of an objective approach and to zoom out of those really intense initial reactions and look at the bigger scope of things and then try to tie that together.

Sometimes I'm so inspired, it just all flows out and I don't even have time to make sense of what I'm even writing, and then other times, I'm more calculated and I have a concept that I know I want to write about.

Sometimes I'm so inspired, it all flows out and I don't even have time to make sense of what I'm even writing.

What is your favourite song of yours that you’ve written?

My song Cherry Pie, which I released last year, has been one of my favourite songs. It's very empowering. It was in the middle of the pandemic, and I was on the struggle bus.

I had so many negative voices in my head so it was really me talking to this negative voice in my head and fighting back against it and refuting all the bad things I had to say about myself. I really love that song. It's a bop.

Another song that is one of my favourites is called Quarters. It's not out yet but it's gonna be on my EP. It's a more stripped back song – just voice and guitar, and it’s about being young and in love. It's based around this concept of having to use quarters in the laundry machines at the laundromat and about being broke and young, but still feeling really full and like you don't need anything because you're surrounded by amazing people.

My new single that's coming out – Getaway – is literally about exactly what it sounds like, which is this daydream of escape, adventure and getting away and doing your own thing.

Is it nerve wracking or empowering to share a more vulnerable side of yourself through your songwriting? Or a bit both?

I do worry about that sometimes. It's hard to be vulnerable. It can be scary. In the past two years I came out as queer and I’ve written about queer experiences in my songs, and still I have that feeling sometimes, or that fear of, ‘How are people going to respond to this?’ That fear is in the back of my mind, but it's been nothing but good feedback when I do end up sharing it.

The biggest thing is to have compassion for myself and patience. I don't feel the need to put my entire life out there in my songs or on social media. I get to choose what I want to share, and that has been really liberating because I'm creating my own story and my own narrative, and that feels really good for me.

I like to not make things explicitly heterosexual in a love song, which is normally ‘girl meets boy’, or whatever. I would like to just leave gender out of it, and talk about love itself and leave it open to anybody who could have that experience. So that has been fun for me to make things not so specific so that people can relate, no matter their sexual orientation. 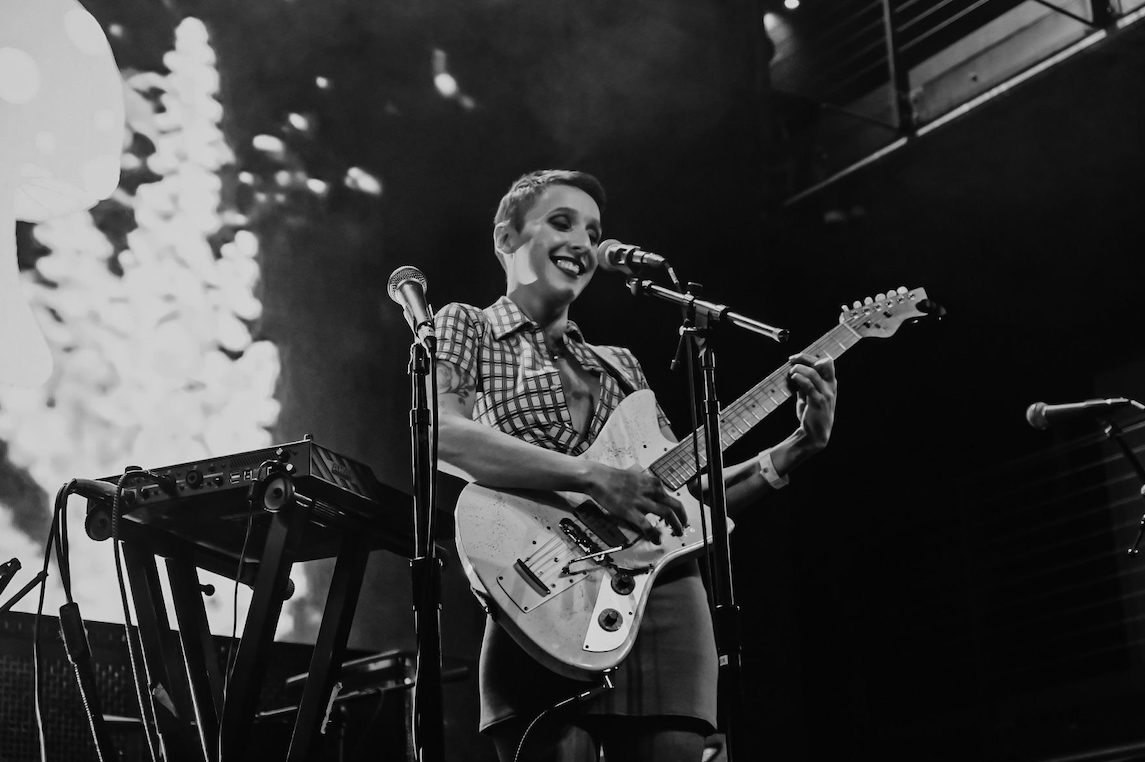 It has been fun for me to make things not so specific so that people can relate, no matter their sexual orientation.

Before I had a TouchMix, I didn't really have my own mixer – I was sort of DIYing it on stage. The TouchMix is really user-friendly. There's a touchscreen on it, which I love. It has plenty of channels, although I usually only perform solo and only have a few instruments on stage with me.

But it has plenty of channels for if you want to have more than just one person plugging in. It's so sleek and nice, and the sound that comes out of it!! When you are sending that signal out to a big PA system, it sounds so nice.

I really enjoy using it. I probably have an advantage because I produce on my Akai Force, so I do have some hardware experience, but even still, it was immediately really straightforward to use.

What can you tell us about your new album at this stage?

It’s called Negative Space and it's a complete departure from my really early stuff like my acoustic album which I made when I was 18. It's nothing like that; it is fully produced.

It was created in this lull of activity in my personal life, but the main concept is that there is a lot of space in the music; it's very dreamy and it really takes you on a journey. It's something that I'm hoping that people will listen to while they’re driving down the road at sunset, or while sitting outside under a full moon.

It's a very moody and cinematic album. I'm very excited about it.