Lara Somogyi on her debut record, sonic exploration and breaking the classical mold

Last month, harpist and electronic artist Lara Somogyi released her debut record !, a sonic exploration of the various ways the harp can be used to create densely textured, genre defying, and deeply immersive soundscapes. Here, she talks pushing musical boundaries, chance encounters with Brian Eno and working with everyone from Hans Zimmer to Anderson .Paak…

We may only be chatting over Zoom, but there is an almost palpable sense of joy and enthusiasm radiating through the screen when Lara Somogyi greets Headliner from her L.A. studio. The prodigiously talented harpist has just released her debut album ! (pronounced exclamation), a spellbinding collection of hypnotic, beautifully textured soundscapes that place the harp front and centre while simultaneously pushing and pulling its sonic extremities to their limits by way of an armful of guitar pedals and synthesizers. The result is not so much a love letter to her instrument, but a tome written in its honour. Almost a decade in the making, it represents everything her career has been about to this point.

“I’m so happy to have this record out in the world; it’s been a real journey of a lot of exploration and love,” a beaming Somogyi says as we join her. “It’s been about 10 years in terms of exploring some of the sonic tools that I’ve been using and how I’ve been developing my sound. I come from a really traditional classical background, which lead me to the Royal Academy of Music in London, where I was introduced to many different avenues that a harp could be placed in. I was captivated with where you can take this instrument. The harp is such a huge, luscious work of art and there are so many ways you can use it and create different sounds. So that exploration is where I started developing my own sound and taking it into a different realm.”

Words like ‘exploration’ and ‘development’ are spoken a lot over the course of our conversation, the sense of intrigue and experimentation that fuelled not just ! but everything she has worked on to date evidently undimmed after drawing a line under her first full length record. As she explains, the very notion of making an album has been a fluid one, with no delineated beginning and end points.

“The record came from a love and obsession with creating things on the instrument that gave me a sense of joy and freedom,” she says. “I was getting asked to play in different ways for different composers and projects, and apart from that I’d be exploring different sounds myself and figuring out what brings me the most joy in how I approach the instrument. So, after just sitting with myself and spending a lot of time in the studio, I would have moments where I felt ‘this is a piece’ and I’d start developing it from there. And then I would reach a point where I felt I had a body of work that really expressed what I enjoy most in the instrument.”

The freedom she describes is certainly one of the album’s defining characteristics, its shapeshifting, genre-defying qualities standing as testament to Somogyi’s ability to bring such an open approach to her craft.

“I find great comfort in sonic textures and making the harp feel atmospheric,” she elaborates. “It already has such a warm, and lush sound, but combining it with things like electronics and pedal effects really shaped how I was playing it. I like exploring the sound of the harp through things like endless reverb pedals and glitch effects - it was really structured by an array of guitar effects pedals that I like to combine in different configurations. It’s a surprise every time and it always piques my sonic interest to play with sounds like that.” 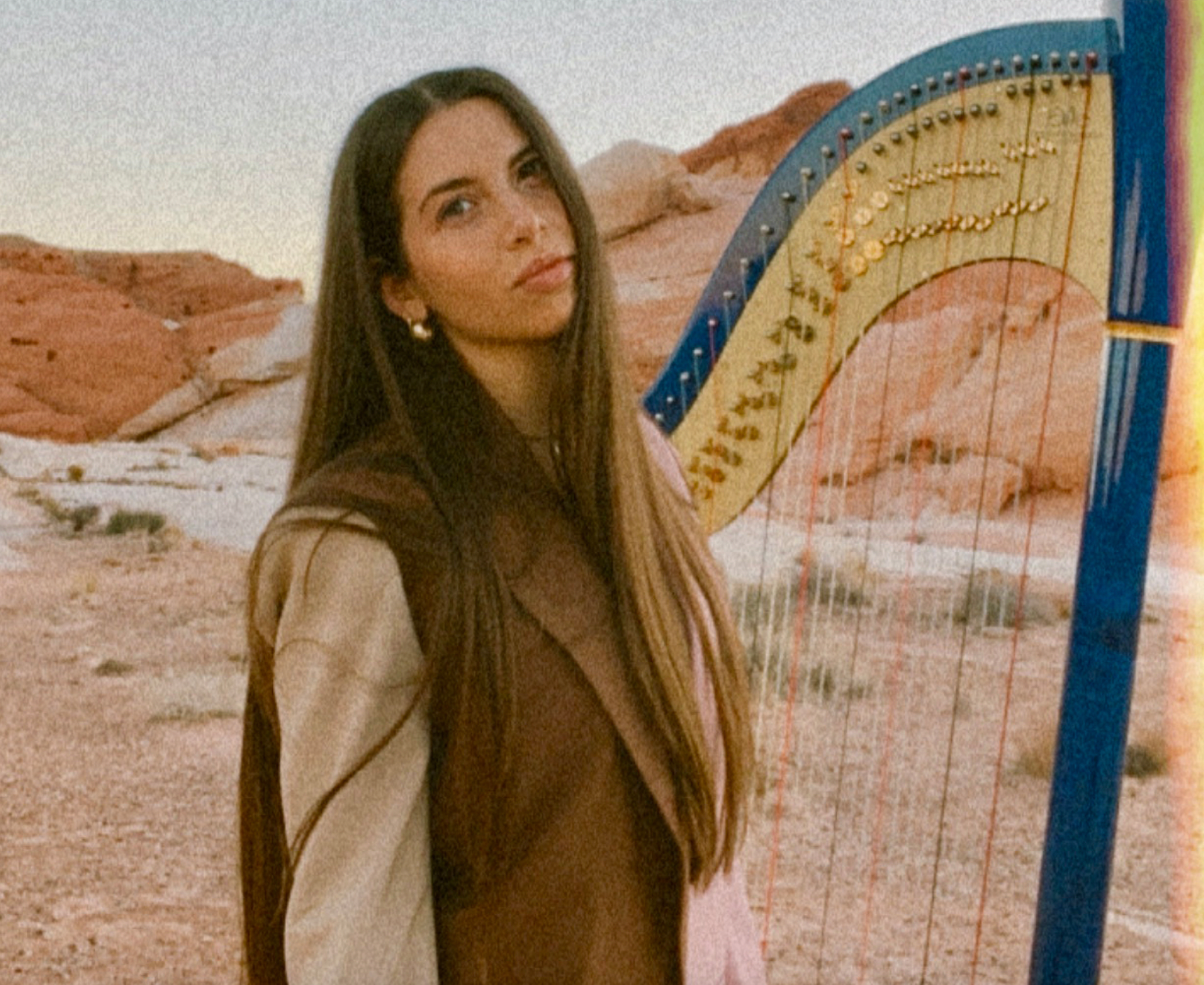 It’s a true sonic statement of how I feel about the beauty of the instrument. Lara Somogyi

So what were some of the major influences that helped shape the record?

“Many things,” she says. “So many sonic inspirations, but I also take a lot of inspiration from different textures and shapes in nature. I come from such a classical background and much of my previous work was really rooted in film, so a lot of my inspiration comes from seeing how emotion plays into telling a story and how you can play something to a picture or film and how that impacts you. I love artists like Ólafur Arnalds, Nils Frahm, Jon Hopkins, Bonobo. There were a lot of different influences. And I just think that within this whole world of sonic exploration the exterior is reflected in my artwork, like the desert. I found a lot of inspiration from the desert because of how expansive it is. I think of it as nature’s modern art gallery because there are so many different fragments and shapes that you don’t find anywhere else. Does that kind of thing affect the way you feel?”

Given the amount of time she spent working on the music that would eventually form !, Somogyi says she found it difficult to determine when to stop tampering with the material and draw a line underneath it.

“There are so many different sounds you can create on the instrument, so I had a hard time saying, ‘this is it’,” she recalls. “There were so many things I was fascinated in and wanted to develop, and you keep asking yourself if this could be a track or something that could make its way onto the album. And there is a lot of music and ideas that will come out eventually on future releases. It was challenging finalising this body of work but I’m really happy with it and how it all came together. It’s a true sonic statement of how I feel about the beauty of the instrument.”

The foundations of Somogyi’s appreciation not just for the harp, but for the exploratory manner in which she uses it, can be traced back to her studies at London’s Royal Academy of Music. It was here that she first began to see first-hand the various ways in which the instrument could be utilised beyond the boundaries of her classical grounding.

“It was challenging and inspiring,” she states. “I was so fortunate to be exposed to so many different harpists in the city that were playing different types of music. There was so much to absorb and endless opportunities to put your own stamp on how you wanted to play the harp.

"And it was really magical because you would run into artists you really admired, and you’d play in different sessions. It was a really formative time as it opened my eyes to a lot of different worlds that I hadn’t been exposed to due to my classical mindset. I ran into people like Brian Eno, and I’d been obsessed with his Music For Airports. I had some great interactions with him that were so interesting. Each time I ran into him I was so attentive, hanging on his every word. He would walk in and have something he wanted to artistically show whoever was in the room.

“One day he brought in a rose and was like ‘come round, come round’. And he’d say ‘come and look at it outside, have you ever seen this colour before'? Unbeknownst to him it was really influential to me because it gave me a different way to interpret being present and noticing things I wasn’t conditioned to notice in everyday life. One day he brought in a perfume and said, ‘smell this, what does it smell like’? It was interesting to experience the sensory exposure he would bring.”

It was also in London that Somogyi would discover her love of working with artists outside of the traditional realm.

“Things like working with Rufus Wainwright and Robbie Williams as a session player was great for looking at the different approaches you could take to playing the instrument and really added to what I was doing. Then coming to L.A, meeting different composers and artists, would lead to different pieces of work, and eventually my record. My first experience with Hans Zimmer was Blue Planet II, where I was able to come in and experiment with a lot of different effects and see how that translated. I met Simon Green from Bonobo at an Ólafur Arnalds show. Anderson .Paak was just through a friend who said he needed a harpist for his show. Then working with him brought different sonic elements to the harp. It’s always such a thrill to learn from them too and see how they create their art. I feel very lucky.”

If the evident excitement Somogyi feels at releasing her first album is anything to go by, it seems unlikely we’ll be waiting quite so long for album number two.