Leapwing Audio is a young and innovative brand that started out in 2015 with an ethos of putting innovation in the hands of musicians. I’m a musician first and publisher second, so that’s a tick in the box right away. DynOne was Leapwing’s first release – a multiband compressor with simplicity at the core (and great sonics, I should add – I had a play with it before embarking on this review). Just browsing the Leapwing site gives you a real flavour of not only the brand, but the people behind it: in 60 seconds, I have discovered that Jeroen, Robin, and Emiliano all met in Belgium, all like very different music, have evolved into an award winning trio of plugin developers, and all love pizza – particularly from Bleecker Street Pizza in New York City, apparently. Marvellous.

So, the plugin I’m diving into today is RootOne – it was launched at the end of August to critical acclaim and, according to Leapwing, it’s “the new way to get the perfect low-end tonal balance” - which immediately sounds intriguing. Furthermore, I can expect it to be “effective across a far wider range of sources” than I might initially think. Excellent news.

First off, let’s look at the GUI – it’s simple, slick and intuitive, just as you’d expect from Leapwing. There is a subharmonics section, a harmonics section, and an input and output section. Subharmonics is set across three faders: Sub, Thump, and Punch, each of which has with its own Drive, Dynamics, and Attack / Decay parameters; and Harmonics has one fader to Drive, Colour or Low Pass the Saturation.

Each of the faders can be soloed or muted (either individually or together in any desired configuration), and there are a number of presets available – but I’m not going there... yet.

Although this plugin isn’t just for kick drums and basslines, I decide to start there, and bring up a multitrack with one of my favourite groove-making duos: James Trood (MD and drummer, Dua Lipa, Zara Larsson) and Andrew Misuraca on bass.

I drop in an instance of RootOne on the Kick (in), play the drum multitrack, and begin to raise the first plugin fader as I go: Sub. I get to about 70%, and the impact is quite striking. I drop it down a little and punch it in and out, moving from 8Hz to 12Hz, driving it around 40%, and leaving Dynamics at 100, with a pretty low attack and decay. My Genelec sub is working harder than it has in some time – and when I isolate the frequency, which you can do with each of the frequency ranges (I don’t recommend this at high volume!) it’s a pretty terrifying experience. But I’ll give RootOne this – that is definitely sub - and I’m pleasantly surprised at how much audible control I seem to have this far down in the frequency range.

Rather than go back to the full kit sound and mix the kick signal in as I go, I’m intrigued to see what the other frequencies sound like in isolation, and blended together. As I bring them into play one by one, the simple Leapwing ethos is evident once more: they each do what they say on the tin. Thump generates a thumping sound (which I really like at around 70% drive and 50% decay for a kick); and Punch is ‘punchy’ (I find dialling this in at about 30% drive and 30% decay does the trick). 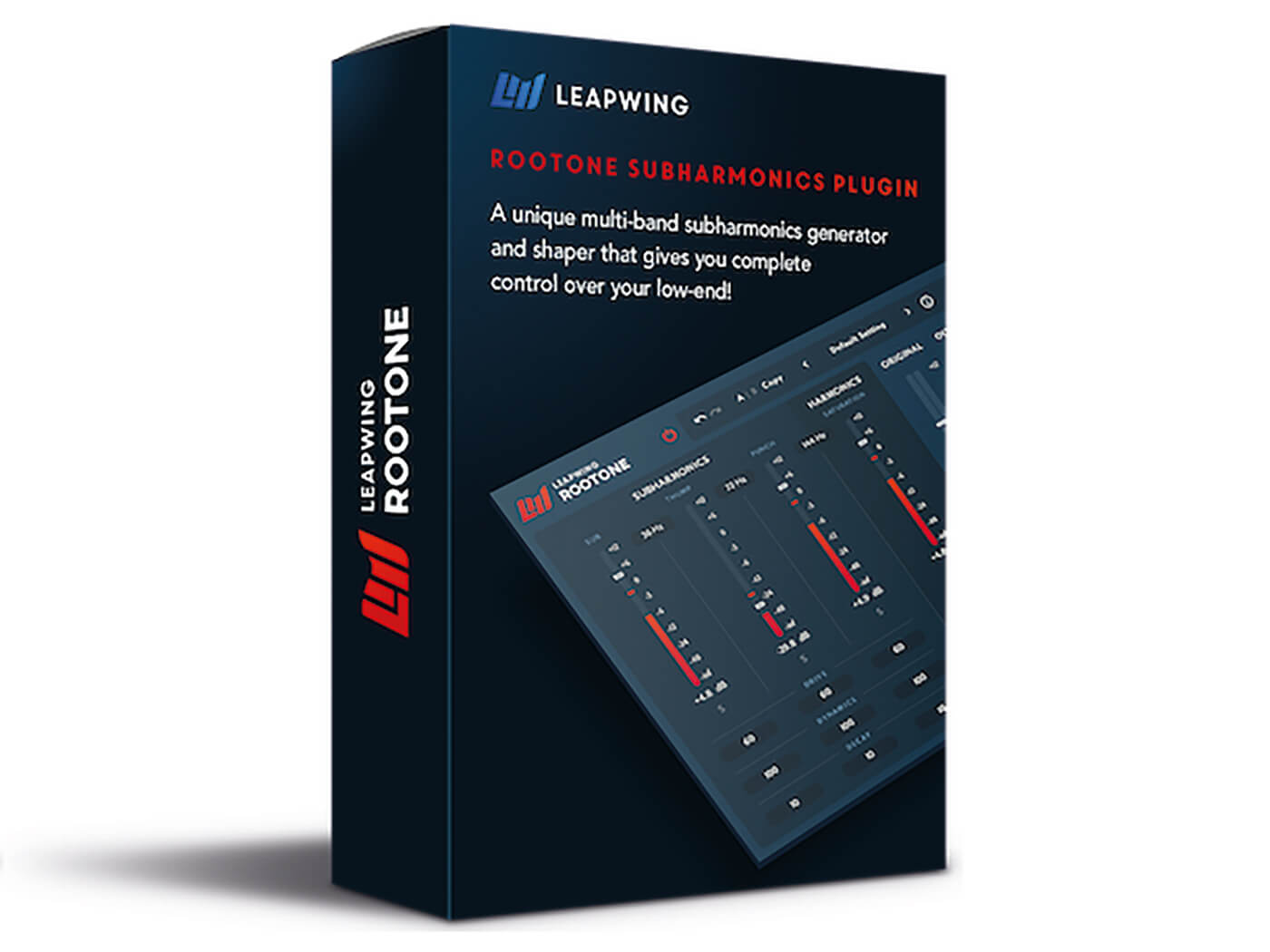 Having never dived quite this intricately into the world of subharmonics, I’m astounded how I’ve improved the sound of the kick in a matter of minutes, being way bolder than normal...

Bear in mind, by the way – this is a real kick drum I’m working on. If I was using my Arturia DrumBrute then these parameters could actually help me tune a drum - even create a note - rather than focusing on sub balance and presence, like I’m trying to do here. So the possibilities in electronic instruments are no doubt even broader. I move onto Harmonics, and the Saturation effect – and this ups the game further (we’re still in solo mode within the plugin here, by the way - we haven’t heard it in situ just yet). I move up from 110Hz to 120Hz, and drive it at about 50% - as long as there is enough Sub frequencies in there, you can create real bite using Saturation while retaining the hugeness of the entire sonic image.

Still in solo mode, I decide to experiment with decay and drive on each of the elements, and with a few little tweaks, I think there is a subharmonic energy here that should really complement the kick.

Sure enough, as I unsolo all the plugin elements and solo the kick first without, then with the plugin dialled in, it’s a real treat. Having never dived quite this intricately into the world of subharmonics, working solely in frequency bands which are pretty notorious, and that I’m not 100% au fait with, I’m pretty astounded how much I’ve improved the sound of this kick in a matter of 10 or so minutes, being way bolder than normal. I unsolo the kick, play the multitrack, and there is suddenly a real vibe.

I wonder if these settings are also efficient on the kick (out) channel, so I drop the same settings into channel two. The result: too much sub, as the first kick is so much tighter – but as soon as I dial back the sub, I up the punch, add some Saturation, and I’ve got a solid, fat sounding kick (out) drum.

I tend to favour Kick (in) within my mixes, and that’s also the case here - but after using RootOne, the two signals have both improved vastly, and my gain isn’t so far different between the two, and that is a first. What this plugin has managed to do is not add the same ‘sound’ to each kick (despite some fairly similar energies being dialled in across the frequency range), it’s somehow managed to enhance the best bits in each. Impressive.

I move onto the snare (top) – and drop in a new instance of RootOne. I leave the Sub dialled in, but way down, so it’s just there – but I do dial in about 50% extra drive, 50% attack and 25% decay on the Thump at 40Hz which really gives it some balls. Then I hit the Punch a little harder at 75Hz, with similar drive, attack and decay, and get a little of the snare crack brought out with some pretty hard-driven Saturation at around 120Hz.

When I unsolo everything and play the kit back, it’s actually amazing to listen to the enhancements this plugin has allowed me to make in such a short period of time, and with such accuracy.