Over the past year or so, Headliner has taken a close look at the entire Leapwing product range, of which we’re big lovers and users. So, when we heard of a new plugin from Leapwing aimed at simplifying the vocal processing chain, we were all ears.

UltraVox is another well thought out idea from Leapwing that brings together the key processing components of vocal recording and mixing in one plugin. There are four unique algorithms: Compression, Gate, Harmonics and Air, with each one represented by just a single control. The Compression and Gate for example are set by a threshold dB value and the algorithm does the rest, including auto gain levelling, so it’s really easy to hear in real-time the result of the amount of compression you apply. (Perfect for those who are learning how to compress vocals).

Gating a recording – especially something as dynamic and varied as a vocal – can be quite tricky, so some engineers leave this process for the mix stage. I was interested to find out how easy it was to use the Gate feature of this plugin in my DAW and record through it. With many interfaces you can set up different routing for the performer from within the interface, which includes reverb at near zero latency while the engineer can monitor the processed audio being recorded by the DAW. However, I used it in Logic in low latency mode and the plugin didn’t seem to introduce any noticeable latency at all. The obvious benefit here is a single plugin that’s not only a useful mix tool, but that can also provide a really quick, low latency, great sounding vocal processing chain for recording.

With UltraVox, spending a couple of minutes setting the Compression and Gate thresholds while you sing through it, then saving that using the save preset option in the preset menu, leaves you with a very simple low latency solution ready to go every time the inspiration takes you. 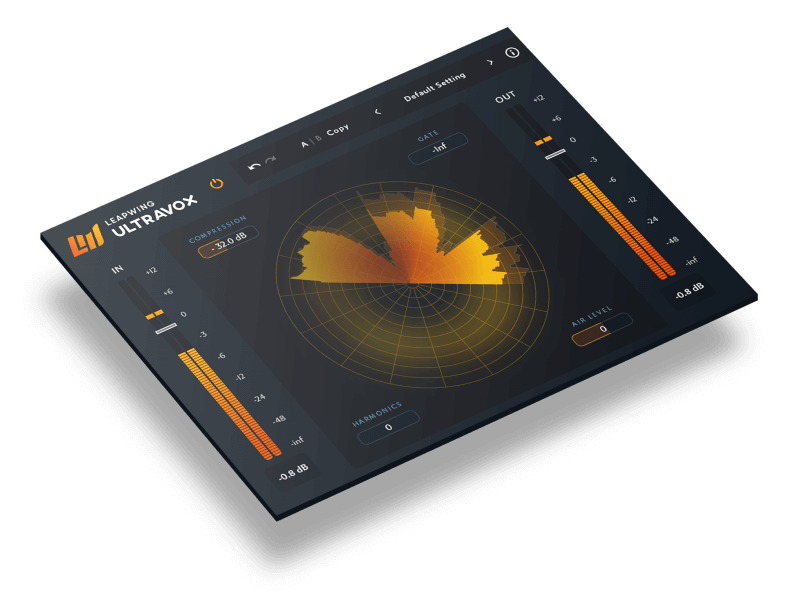 What was interesting was that the Compression and Gate seemed to work in harmony, as if they knew what was vocal and what wasn’t, almost like a look-ahead feature without the latency. Of course it still lets through finger clicking, foot tapping and sharp intakes of breath, but background breathing and headphone bleed were gone, making it easier and quicker to edit out later while keeping your vocal performances intact.

When it comes to mixing, the algorithms again work their clever magic. When dialling in compression from the single threshold control -60 dB to 0 dB, it has program-dependent fast attack and slow release times, and seems to have the perfect ratio and gain make-up depending on the nature of the vocal track. How it works is of course Leapwing’s own closely guarded secret, but what it does is balanced and always musical. As you reduce the compression level threshold, the voice comes forward and warms up. As you continue, it starts to move back again but still maintains its integrity and detail.

The Gate, also with variable program dependent attack and release times, is really easy to apply in the mix process and is admirably suited to further processing of vocal recordings. I picked a couple of recordings that I knew were littered with headphone and foot tapping, as well as preparation noises, lip licking and breathing etc. and I could precisely remove them with just a single level control, almost as if UltraVox has a listen-and-learn feature.

Now to the two great inclusions that really make this plugin somewhat of a gem. The first is Harmonics, which is again just as at home on the front end and in some ways has a kind of vintage vibe about it when applied; by blending in a varying amount of second and third order harmonics you can really increase the depth and presence of your vocal. Again, this is a feature you can use to enhance the recording as well as mixing, and in some cases can make an ordinary mic/pre interface sound far more than the sum of its parts.

Finally there’s Air, a custom curve boost around 12kHz which adds a crisp sparkle to proceedings without causing any enhancement to possible sibilance. Again a really nice touch if you’re singing enclosed by baffles and want to just open up a little space around the vocal.

ULTRAVOX IS NOT ONLY A USEFUL MIX TOOL, BUT IT CAN ALSO PROVIDE A REALLY QUICK, LOW LATENCY, GREAT SOUNDING VOCAL PROCESSING CHAIN FOR RECORDING.

Leapwing has created a number of really useful presets from which to get up and running, and the preset menu also features a save preset option so you can easily store and recall user presets for your own way of working. There’s the usual undo/redo buttons available to skip back and forth over the last change and an A/B feature to compare different quick stored preset edits in detail. There’s an overall bypass button that maintains the plugin latency to compare processed audio with unprocessed. As with all Leapwing plugins, there’s an ‘In’ slider on the left for controlling signal level into the plugin, and on the right, the ‘Out’ slider to allow gain staging in your DAW. 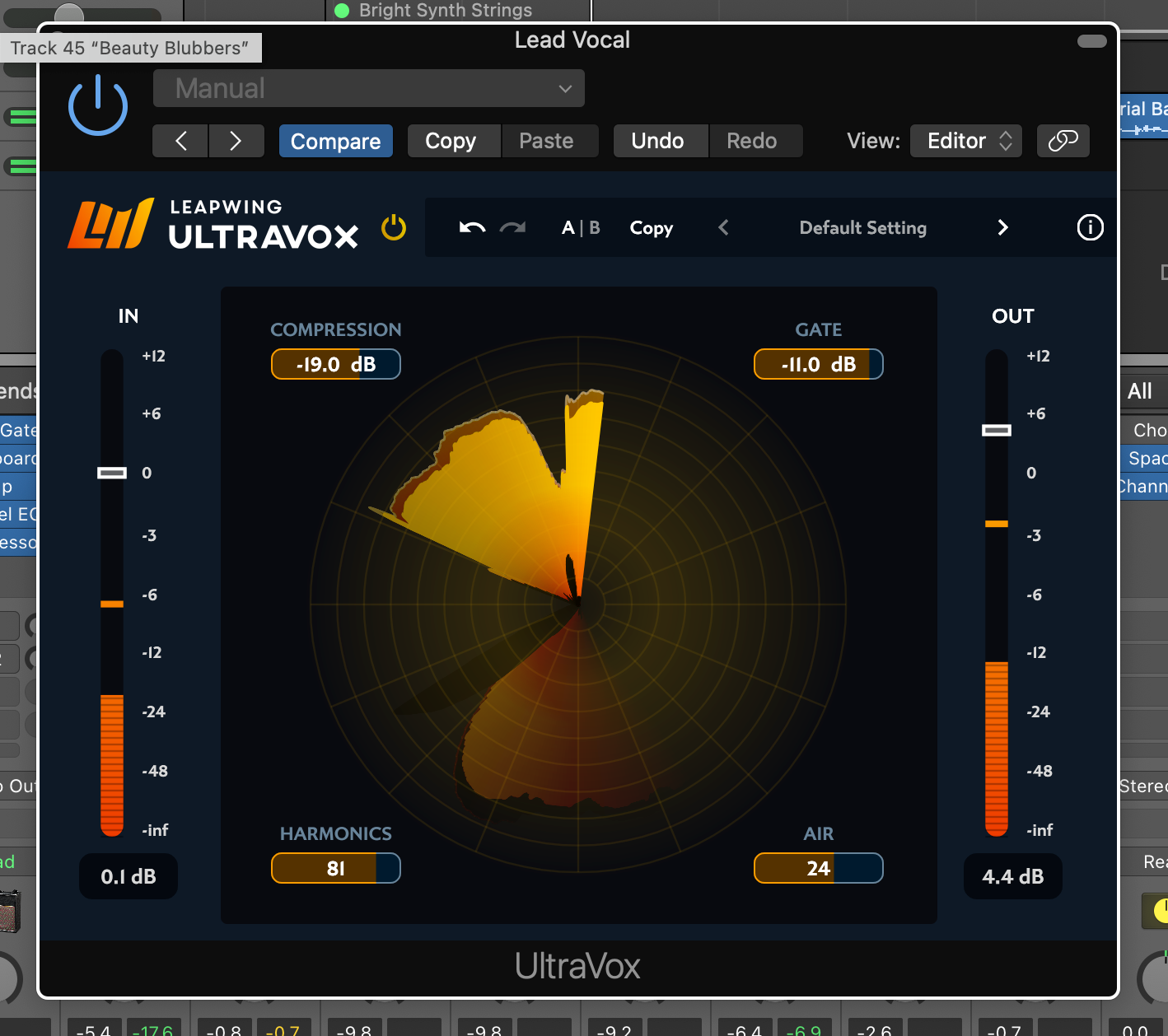 As a recording tool for songwriters and musicians, this is a really clever plugin that offers a straightforward quick and easy solution for optimising your vocal input signal path without introducing unworkable latency or without the need for any real expertise as a recording engineer. However, in an age when workflow is of growing importance, I can see UltraVox being equally important and trusted by busy professionals. At no point while I was playing with UltraVox did I dial in a setting that actually made a vocal sound anything other than a better version of itself, and all with a high degree of transparency.

As a mix tool, Leapwing has come up with a really excellent time saving product in UltraVox that takes the faff out of trying to build the perfect vocal mix chain. What I can also tell you is that UltraVox does all the obvious things extremely well, and if you haven’t yet tried any of Leapwing’s excellent plugins, start with this one!

UltraVox is available for PC and Mac in AAX-Native, VST, VST3 and AU formats. You can download a fully functioning copy now on a free 30-day trial, and it is also currently on special offer direct from Leapwing.

Further Reading: Our full guide to the best plugins for vocals