Lectrosonics ensures flawless audio during Spider-Man hologram event: "the tension in the room was palpable"

A live stream in which Spider-Man: No Way Home star Tom Holland interacted from L.A with the Italian press in Rome. So far, so straightforward, right? What if Holland was appearing live and as a hologram – and the sound had to be pristine despite a lag in audio. Despite his spidey senses tingling, Jzoo Studios’ Shiheng ‘Jedy’ Xu explains how Lectrosonics ensured disaster was averted…

The Spider-Man virtual press junket with Holland was a live stream Q&A, so there was no wiggle room for anything to go wrong, explains Xu.

“We were on a stage in Los Angeles and broadcasting to Rome, where Tom was appearing as a hologram. It was this crazy-big international production with crew in Los Angeles, London and Rome.”

Despite the pressure being on for such a high profile, technologically-challenging film promo event, Xu was safe in the knowledge that he was armed with his trusty stable of Lectrosonics wireless gear, from time-tested SRb and SRc receivers paired with SMQV and LT transmitters, to a recently acquired DSQD digital receiver.

“I was rocking an SRb, an SMQV, and an LT,” he says of the Spider-Man press junket. “The LT was a backup in case the other channel had any problems – which it didn’t. I was using the ALP620 fins as well, which have always worked great for me in any scenario. My role was to send the feed of Tom’s microphone into the main streaming rig.”

The biggest challenge stemmed from the lag between L.A and Rome, as the Jzoo Studios team couldn’t monitor what Rome was receiving in real-time.

“It would take about 5-10 seconds to see and hear how it looked in the venue,” Xu explains. “We had a lot of backup solutions and thankfully we didn’t need to use them. My worst nightmare was someone else switching on another transmitter in a similar frequency like mine, but luckily it didn’t happen.

"There were a lot of people from different teams cramped into a small studio, and the tension in the room was palpable, so there was certainly a decent amount of pressure!” 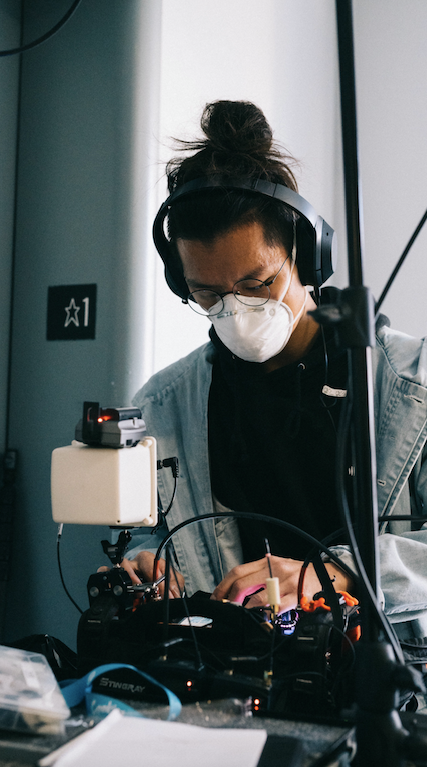 The tension in the room was palpable, so there was certainly a decent amount of pressure!

It turns out that Xu was virtually the only one on set not to be visited by gremlins. “There were problems in Rome and in L.A with video, lighting, cameras, and having sufficient bandwidth to broadcast a huge 3D image of Tom Holland across an ocean.

"There were no problems with audio, which made me look pretty good,” he grins. “The reliability is why I don’t think I’d ever use anything but Lectrosonics.”

Xu has forged an unconventional path for Jzoo Studios, and with that comes unconventional wireless applications, for which he finds Lectrosonics to be more than up to the task.

“I don’t think a lot of people do this,” he says, “but I use Lectro for sound design and to record sound libraries. Lectrosonics’ sound quality makes that possible because it’s so fantastic. I sometimes even think I can tell when I watch certain TV shows or commercials if it was used. I’m like, ‘Yup, that sounds like Lectro!’” 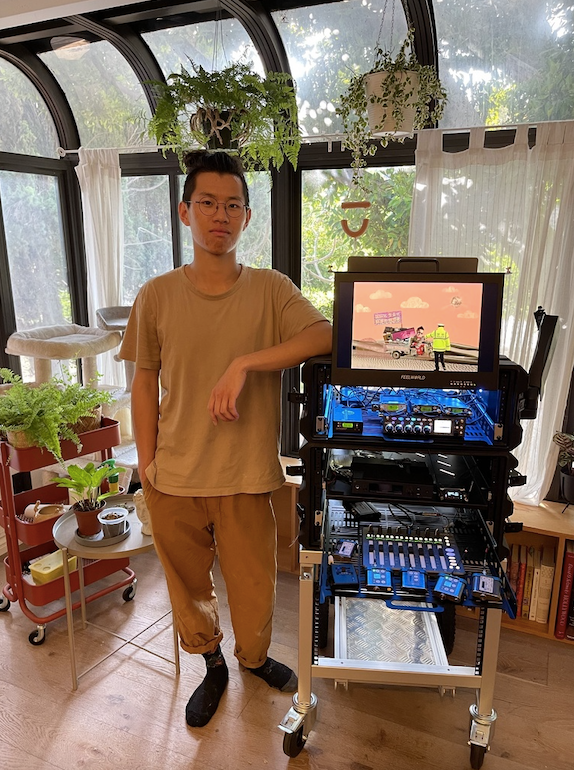 The reliability is why I don’t think I’d ever use anything but Lectrosonics.

His Lectrosonics kit saved the day again on a recent music video series for Panic of the Disco’s album release:

“We were shooting in a house on a hill that was extremely busy in radio frequency, and due to the location I was forced to be rather far away from the set, and there were many people in between my antennas and the talents,” he recalls.

"The antenna and receiver front-end rejected the IFB transmission really well and I was seeing very little noise increase with the high power transmitter in the proximity of my receivers.”

“I have always had great confidence in the aluminum housing all Lectro’s products, and I have never sent anything in from any drops or knocks,” he points out.

“All of my transmitters are loved, with all the random dents and scratches from all shows – the stories are countless. It ranges from an eight feet freefall onto concrete to taking the entire weight of grown men as they violently sit down. There are so many fun stories and thankfully Lectro survives another day!”