Headliner heads down to London’s Hyde Park for the weekend to meet BST’s audio system engineer, who explains why Martin Audio’s MLA is crucial to the smooth running of the sold-out music festival, what goes into working with Stevie Wonder, and how he navigates every sound engineer’s worst case live scenario.

“I studied chemistry at university,” shouts Toby Donovan, audio system engineer at British Summer Time Hyde Park. What he is shouting over, is the consistently spectacular live tones of singer-songwriter Lianne La Havas, who is flawlessly belting out her soulful hits to approximately 65,000 sun-soaked (and happily sozzled) music-lovers in London’s Hyde Park.

Headliner is snapped out of the hypnotic state caused by La Havas’ blissed-out vocals during her cover of I Say a Little Prayer (or possibly is still recovering from experiencing the sheer sonic power and associated G&Ts of Celine Dion the evening before) to meet Donovan, who has managed to take a few minutes out of a very hectic working weekend to shed some light on the technical requirements that go into a large, outdoor event like BST.

“While I was at university I was also working for a local PA company, and I’ve played guitar and been in bands for a long time. I was mixing bands for small, and then larger companies, and eventually this just developed into working for bigger companies and going on tours. This really wasn’t something I studied, it was more a case of doing what I enjoyed. I'm a musician; I started small and you get to know people and work your way up,” he yells - as politely as one can.

Bellowing has become intrinsically linked to the BST event, which is celebrating its seventh successful year at its Hyde Park site: in the past, controlling the volume levels for the park’s affluent neighbours proved a big challenge.

Historically, Hyde Park concerts have struggled with off-site noise pollution, leading to neighbourhood complaints and the need to reduce sound levels on site - meaning that the audience couldn’t hear the performances they had paid good money to see, which this year include headliners Celine Dion, Barbra Streisand, Robbie Williams, Florence + The Machine and The National - and tonight, Lionel Richie and Stevie Wonder.

“The biggest challenge of Hyde Park is the offside noise issue,” Donovan confirms. “Park Lane is right next to the park, as are a lot of very nice hotels and very expensive houses. This event is something that some people don't necessarily want on their doorstep, but having a big London park - they want to put on events for the public.”

And the public indeed came in picnic blanket-armed droves, with each date reportedly completely selling out. Headliner can attest to its popularity: if you live in the UK, you know someone that went to one of these gigs, and oh didn’t they have to let everyone know just how much fun they were having? Oh wait, that was us. 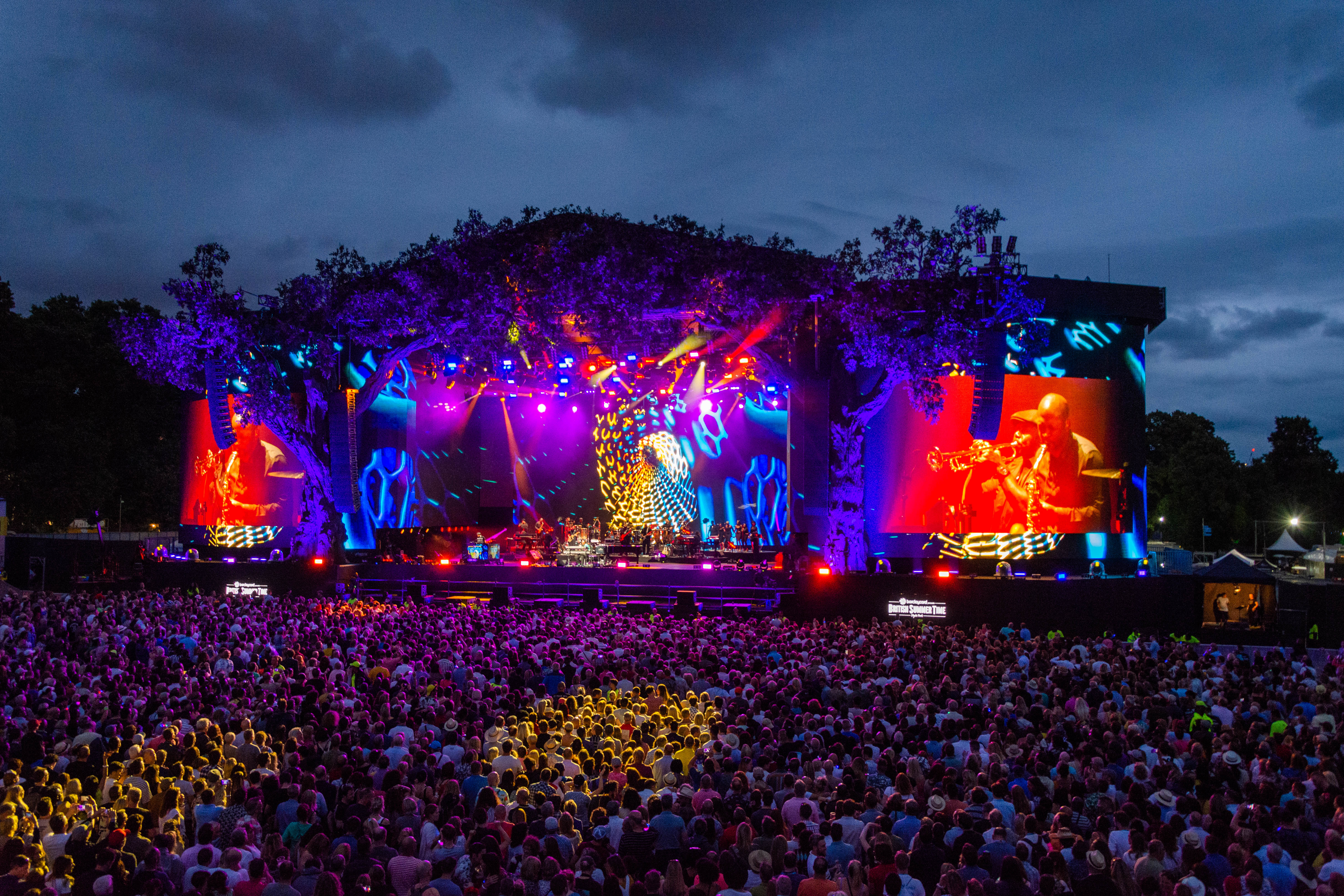 Stevie Wonder's vocals were as dexterous and soul-filled as ever, the joy and love of his craft radiating through every performance

When starting out as an audio engineer, Donovan always had an interest in the scientific side of the role.

“Most most PA system technicians work with the big speaker systems, and they probably don't get much bigger than this right now!” he says, gesturing to the huge line arrays that loom above.

The system in question has been dusted off after coming straight from an usually mud-free Glastonbury. Working with technical contractors, Capital Sound, promoter AEG Live deployed a Martin Audio MLA multicellular loudspeaker array technology, which boasts the unique ability to meet required propagation thresholds, both inside the bowl and beyond the perimeter.

The system is well known for its ability to place the sound only where it is required, rather than relying on trial and error. As a result the sound coverage pattern can be programmed into Martin Audio’s MLA software to guarantee sound containment - ideal for an outdoor event like this.

“Fans positioned out at the perimeter have been able to enjoy an identical sound experience to those at the front of the stage,” nods Capital Sound general manager, Paul Timmins. “But walk five yards outside the sound-field and it will vanish.”

“Martin audio do a lot of advance on the design,” adds Donovan. “Jason Baird - who came up with MLA and designed it - is very heavily involved in the design. We get a lot of support from Capital Sound and the manufacturer. The whole team of people put an awful lot of advance work into getting it right. The system is now in its seventh year here, and it works well every time!”

Monitored by acoustic consultants, Vanguardia, as it has been every year, MLA was optimised using Martin Audio’s proprietary advanced Display software for its wide range of performance over the two weekends.

The Great Oak main stage was equipped with two hangs of 16 MLs and a single MLD downfill per side, with 13 MLs and an MLD downfill for the sidehangs. The sub array consisted of 32 MLX in the now familiar broadside cardioid design: 21 front facing, 11 rear facing. With 12 MLA Compact serving as front fills all MLA components were running on the same network.

Out in the field, the main 10 delay towers comprised seven MLA and a single MLD downfill, supported by 12 MLX subs while delay positions 10 and 11 deployed eight MLA Compacts. One slight change this year was that delay position nine was bolstered with the addition of two further MLA elements in respect of the depth that the site now runs to, enveloping those at the rear of the field.

The event sees Donovan work closely with the rest of the team at Capital Sound, particularly Al Woods (Audio Crew Chief) and Chris Whybrow, who looks after the desks at FOH, in addition to helping guest engineers with visiting bands with any information they need about the sound system, accommodating any changes they may want to make.

“My main responsibilities are to set up the loudspeaker system, which involves time aligning and equalisation of all the loudspeaker arrays and clusters on site,” he explains. “I use various pieces of equipment: Lake LM44 loudspeaker processors and Martin Audio Display and VU-NET software control the system. I use Smaart V8 to analyse the system with an Earthworks Measurement Microphone and a Line6 Wireless kit to save running cable. This enables me to get things sounding correct and consistent over the site.”

He explains how it works for an event such as this, which sees the musical acts travel with their own audio engineers.

“Stevie Wonder came in and his people loaded up last night, and he did the soundcheck earlier on today. A really big part of our role is to liaise with the people who do work for the artists; we work with them to provide support with anything they need, making sure we give them the sound they want - it’s what we’re here for.” 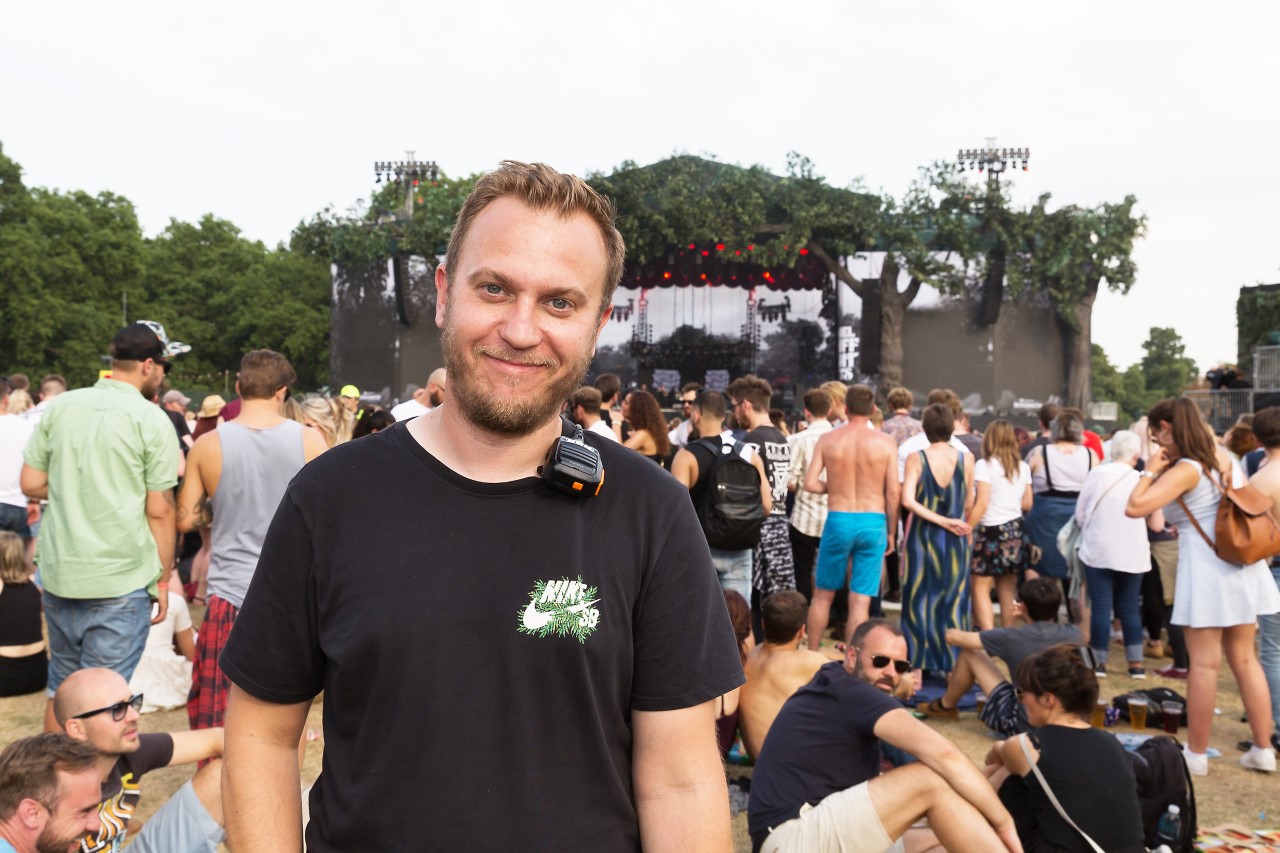 When Lionel and Stevie take the stage later on, Donovan will check the levels and make sure that everything is running smoothly:

“Myself and some of my colleagues will walk the field and make sure that everything is performing as it should do. We will make sure that the levels are right at the back of the listening area, and that it is not too loud at the front. Their teams take care of the input side of things on the stage, and we make sure that our systems are performing correctly: we will meet them in the middle. This is a recipe for a really good gig.”

Of course, not everything always goes to plan during live events.

“Oh don’t I know it!” he laughs. “Sometimes at a gig you might lose power. If you lose power, that is…not good! That has happened to me. Plenty of times! A lot of systems are on a UPS (uninterrupted power source), so you've got a battery in that situation. If you can hear beeping, everybody needs to press save, and if you don't get the power back in the batteries, they are going to die and then we will be totally in the dark for a while. We just have to keep calm and be logical and methodical. Then there are the scenarios where you finish a festival at 11pm and have to load everything onto the truck. That's the moment when it starts to rain… So you might still be there at 3am, completely soaked to the skin. But we do a really cool job and sometimes bad things happen, but they really aren't that bad in the grand scheme of things!”

That certainly becomes apparent when taking to someone whose professional highlights so far include working with The Killers, The Stereophonics and Black Sabbath, although Donovan is also at home in the pop world, having come to BST straight off the back of over three months touring the UK with Take That - albeit with a slightly more mum-centric audience demographic.

“We had some really good results with Black Sabbath at Hyde Park a few years ago,” he reflects. “It was one of the years when the weather was relatively kind to us and we could push the sound to 140b, which is super loud for a London Park, so that was cool! And there are those special moments at certain gigs where the whole crowd gets involved and it sounds particularly good; when that happens, it’s such a good atmosphere.”

Currently knee-deep in the UK’s busy festival season (see: the UK’s small window of sun), the rest of the year will see Toby busy with touring acts, although he is trying to have a (sort of) break this year, choosing a couple of his favourites to work on.

“Silverstone Classics (because of the classic cars), and also the Sziget Festival in Budapest, Hungary,” he smiles. “I love this festival as it is really well put together and also there are NO NOISE LIMITS, so it’s basically the polar opposite of Hyde Park! We take the same MLA system, and can put our energy into making it sound as great as possible. We can really rock out, and if someone wants to come and mix at 110dB, they can do that!”

La Havas’ set is finishing, signalling Donovan’s time to start making checks before Lionel Richie and Stevie Wonder perform later on, the latter treating the crowd to a nostalgic (although somewhat over-long) trip through his greatest hits, only losing the crowd’s attention during a meandering jamming session and when the DJ would play other artist’s tracks mid-set. Still, his vocals were as dexterous and soul-filled as ever, the joy and love of his craft radiating through every performance. The audience finally got their pay-off after patiently waiting for final track, Superstition, which the group of merry - and now soggy (see: UK summer) - gentlemen nearest to Headliner jubilantly celebrated by stripping to their shorts and straw hats and waving their t-shirts over their heads. We can’t wait for next year.