ADRD on Their New Record & Touring With Scouting For Girls

Fusing together pop, rock, jazz, prog and swing, the one common factor throughout all their songs is that this band is truly here for a good time. Finding success in the States with two songs breaking into the Top 30 in the Billboard Adult Contemporary charts (Daylight and It’s Your Night), the Aliens broke through stateside with unprecedented ease - owing to the relatability of their music and its popularity on Spotify playlists and others.

It’s this kind of fun-loving attitude which secured the boys a spot at the sold out Camper Calling festival, a spot which exposed their timeless brand of energetic rock ‘n’ roll to precisely the right audience. So, too, is their support slot with Scouting For Girls, a partnership which has led to SFG lead singer, Roy Stride, offering to come into the studio with the band, to co-write and produce when they record at legendary Dean Street Studios - which has seen the likes of Adele, U2 and Pink Floyd walk through its doors.

Aliensdontringdoorbells’ tour with Scouting For Girls kicked off at the end of September at the William Aston Hall in Wrexham, so Headliner recently took the opportunity to find out how things are going…

You’re currently on tour with Scouting For Girls, how did that come about?

Luckily, we managed to do some festivals this year, and we were on the same line up as SFG. We had previously been discussing contacting Roy, from SFG, as he is a great producer. We had already submitted to a few different bands for the support slot. So, after the festivals, we had a chat with Roy via Instagram about producing a few songs for us, he said he would love to do it, so we booked Dean Street Studios in and then we heard the wonderful news that they would like to offer us the main support for the tour - what a wonderful day that was. 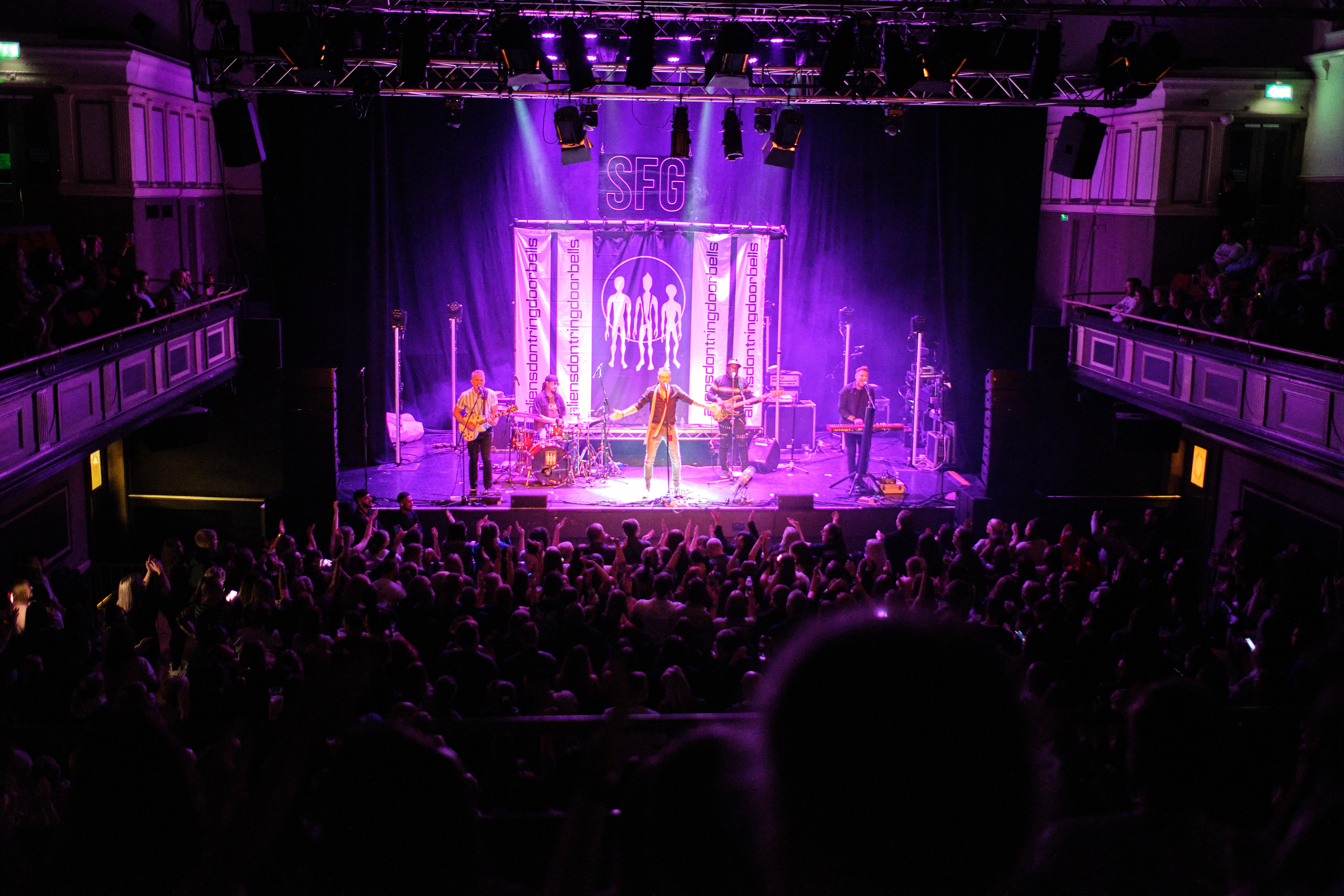 So the rumours are true, you have indeed been recording at Dean Street Studios with SFG’s Roy Stride? What’s going on there then?

The cat is well and truly out of the bag…it all came about before the festivals really, as we had heard that Roy was a producer, so we approached him and discussed a few ideas and he agreed, along with his fellow producer friend Alex, that they would love to spend a week with us in Dean Street Studios, and what a vibe it was. You could feel all the history, it was amazing, the sounds, instruments and the general feel of these iconic studios, plus Roy of course...and there we finished writing and producing two great songs, I’m Not With Amanda Now and The Big Old Nowhere... watch this space for release dates; we are performing Amanda in the set of this wonderful UK Tour.

Can you tell us about the new single, Slipping Away?

This was one of the earlier songs written by the band for the current album Arrival; it was Dorian’s initial idea and lyrics, we all then jumped on it and got this great free spirited rock song to come out, with some very strong Police influences... It’s one of our favourite songs and especially mine to sing, as it’s so powerful in words and performance. It’s out there now to download, and also on terrestrial radio across the UK. And we must say, go to our YouTube channel, as it has a wicked video which we can honestly say we had the best day filming, in the Ukraine.

What can we look forward to from your live show and what’s next for ADRD?

For the live shows, we have added all of our favourite songs from the album, and as we said the new I’m Not With Amanda Now... it’s a show full of great tunes, which we certainly know will get the audience jumping. We all have years of experience doing live stage work, and after the summer of festivals we are ready to show the UK what the Aliens can do, so please come along and we guarantee the night of your life with us, Ben, the other support act, and of course Scouting For Girls.

After the tour, well, we have written and produced nearly eight tracks for the new album, so we will be tweaking them, plus looking at a small Spanish tour in December. Then in February we are off to Denver to finish the new album, and then we start preparing for the next summer of festivals, and another UK tour, plus one in the States to see our American fans, following our Billboard success over there. So, keep watching for all the new single releases between now and then, as we plan to release monthly with some great new tracks for our fans, and potential new fans to enjoy.