Revered heavy metal guitarist, songwriter and producer Andy Sneap reflects on the moment he was asked to join Judas Priest as their touring guitarist, and explains why Celestion’s Vintage 30s are always his number one choice.

Andy Sneap should currently be touring with Judas Priest, but instead has spent a lot of this year hunkered down in his studio in rural Derbyshire working on various projects, which thankfully have been in good supply.

“Production-wise, it's worked out and it’s been quite a good year; gig-wise, it's turned out to be terrible,” says a laid back Sneap.

“There's been a few albums, so it's kept the wolf from the door. A lot of things are still being worked out with live stuff because that has to get planned around festivals next year - that determines a lot of scheduling for any gigs in between. I'm on a need to know basis, and I don't need to know,” he laughs. “Honestly when I'm on these tours now I don't even know where I am. I'm just like, ‘right, where's the stage?’”

Sneap is a musician, songwriter, guitar player and record producer with over 100 albums to his name, most of which have been produced at his Backstage Recording studios. Some of his most critically acclaimed production work on albums include Deliverance by Opeth and Disarm the Descent by Killswitch Engage, for which he earned a Swedish Grammis and a US Grammy nomination, respectively.

Sneap got his first guitar and amplifier from his parents at age 12 as a Christmas present. He started learning guitar with fellow Hell band member Dave Halliday, who had a profound effect on Sneap and left him the rights to all his songs and equipment in his will following his death.

“I got into rock and metal when my brother bought me a Status Quo single for Christmas,” he remembers. “I just loved the energy of it. Then I got into AC/DC, Motorhead and Iron Maiden and all the bands that were around then. It was a really happening time for metal. I met Dave, who was like an older brother to me. He took me under his wing, was giving me lessons, and it was just an inspiration seeing all these bands.”

He knew he wanted to be part of the metal scene, and as a performer, he first built his reputation as one of the guitarists in the British thrash metal band Sabbat – playing with them until their disbanding. To this day he is still one of the co-guitarists in Hell.

“I wasn’t really very good at anything else! I just loved the vibe of putting songs together and the sound of it all coming together as well. When Sabbat split up in 1990, I carried on in the studio side of things because even though I wasn't in a band, I was still being creative and doing what I enjoyed. It's always been a natural stepping stone. I've just followed my nose really and gone with where it's taken me.” 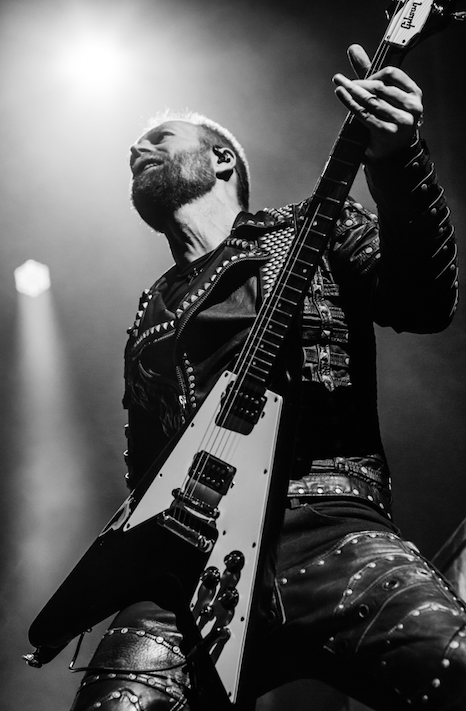 In 2018 his nose led him to joining Judas Priest as a touring guitarist following the band's long-time lead guitarist Glenn Tipton being diagnosed with Parkinson's disease.

“I’d worked with them already as a producer so we were good friends, and I knew of Glenn’s health issues. I was in a rehearsal room with them and Glenn asked me if I could do the tour, which started in three weeks time. I was like a rabbit in the headlights, but I came home, learned 25 songs, had three days of rehearsals with them and played the first show for 6,000 people. No pressure at all!”

Sneap distinctly remembers being in the hotel lift before being picked up for that first show:

“It was like being taken to the electric chair,” he laughs. “I was thrown to the internet lions, really. With any band that's been going for 40 or 50 years, there's chemistry there, so for me to just step into Glenn's shoes, it was like, ‘What do I do? Do I move around? Do I do my own thing? Where do I need to be on stage at this time?’

"We didn't know, so it was a learning process as it went on. We went through the set three or four times before we did the first show; I don't think people realise how close to the bone the whole thing was!”

Although he was racked with nerves when he was asked to join, Sneap knew he’d regret it for the rest of his life if he passed up the opportunity:

“These are my heroes, so it was a really big task when I got asked to do it. The next morning I woke up and I felt physically sick just from the thought of doing it. But I knew if I didn't do it, I'd regret it for the rest of my life. So I had to jump on board and get match-fit.

"You don't want to be on your deathbed going ‘what if?’ – that's the worst thing possible. If you don't try and take advantage of situations, what's the point in being here? You've got to embrace it.”

If you don't try and take advantage of situations, what's the point in being here? You've got to embrace it.

His touring career aside, Sneap is one of the most active music producers in the metal music genre, and has worked with bands such as Judas Priest, Accept, Blaze Bayley, Saxon, Opeth, Amon Amarth, Arch Enemy, Exodus, Megadeth, Kataklysm, Kreator, Nevermore, Testament, Carcass, Fear Factory, Overkill and DevilDriver.

Sneap holds the distinction of having been credited as a producer, mixer or engineer on all six of Testament's albums since 1999’s The Gathering, as well as all seven of Exodus' releases since the 1997 live album, Another Lesson in Violence.

He set up Backstage Recording Studio in 1994, which he used as a small demo facility for himself and local bands from the Midlands area. Later relocating to larger premises, the studio went on to welcome some of the biggest names in heavy metal through its doors.

“In the ‘90s I was probably spending about six months of the year in the US doing albums out there, and I could see that we were spending a lot of money on studios, and the bands were paying me. The bill was pretty pricey for a band to do a full album with accommodation, so I started thinking about having a place at mine where I could have accommodation, do the whole package, and I could cut the band a deal. I knew I could actually earn more money if I owned the studio as well. It was for everyone’s benefit, really.”

Sneap only uses Celestions on his records, his longtime go-tos being Vintage 30s and 12” Greenbacks paired with Marshall cabinets. It’s been this way for him for as long as he can remember:

“I’ve got about eight Marshall cabinets from the ‘80s, which were actually the dummy cabs that were in one of The Cult’s music videos. I went down to see Ken at Marshall to buy some cabs for Sabbat, and there were all these cabs in the corridor,” he recalls. “He said he was getting rid of them, so I said, ‘well, you can get rid of them in my van!’ I paid £35 each for about 12 of them!”