The chief executive of UK Music has warned that European tours will be put at risk by the new Brexit trade deal, which will mean that while workers from some industries will be able to travel to the EU on business without a visa, musicians will not, as they have not been included in the list of exemptions.

From January 1 2021 onwards, artists from the EU will also face difficulties should they want to perform in the UK. Freedom of movement will end as the UK fully leaves the EU and will mean bands will need a visa, as well as having to provide proof of savings and a certificate of sponsorship from event organisers.

“There is a real risk that British musicians will not be able to bear the cost of extra bureaucracy and delays which would put some tours at risk,” commented UK Music boss Jamie Njoku-Goodwin, who added that “additional costs and bureaucracy could be the straw that breaks the camel’s back”.

A petition has been launched by video technician Tim Brennan, who seeks Europe-wide visa-free work permits for touring professionals and artists. Musicians that have signed the petition include KT Tunstall, Ronan Keating and Gary Kemp.

“We would like the UK Government to negotiate a free cultural work permit that gives us visa-free travel throughout the 27 EU states for music touring professionals, bands, musicians, artists, TV and sports celebrities that tour the EU to perform shows and events, and Carnet exception for touring equipment,” said Brennan.

“The UK has a huge music/event touring industry which has suffered immensely due to Covid,” he continued. “After the end of the transition period, we face further hardship when trying to tour the EU on a professional basis, with potentially each country asking for its own visa that would be valid only for one trip. As a freelancer I, and many like me, travel through the EU countless times a year on different tours and events, this will become impossible due to cost and time if we do not have visa-free travel.” 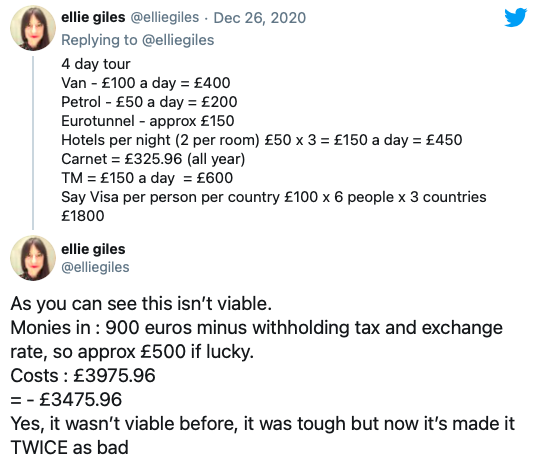 Music manager Ellie Giles recently Tweeted a thread in order to demonstrate typical costs touring artists incur. Based on a band made up of six people for a four-day tour (if they needed to get visas for three countries on the tour), she estimated it would cost £1,800.

Her calculations saw the group only having earned £500 after tax and the exchange rate were factored in, while their costs would be around £3,500.

“Yes, it wasn’t viable before, it was tough, but now it’s made it TWICE as bad,” she wrote.