Meraki Festival 2018: Cooking up a Storm

Festival magic returns for the ‘difficult second year’, as some may have it — but thankfully, there’s no such thing in this instance. Meraki, which takes place at the Hertfordshire County Showground, bills itself as ‘bringing festival magic to St Albans’; and Headliner is pleased to report that the festival brings an even bigger helping of magic this year, after an impressively solid debut in 2017. Largely thanks to a lineup of magical proportions, and a few wise tweaks and refinements that should have Meraki marching towards the big leagues of the UK’s world-renowned festival scene.

The rolling Hertfordshire hills provide the picturesque setting, and the work that has gone into getting the festival looking charming is immediately obvious: arts and crafts, a ferris wheel, and the obligatory festival flags to name just a few bits that make Meraki an enchanting place to be.

First stop on Friday is at the Mr Peebles stage, which has evolved from a teepee, into a solar-powered bus. It’s absolutely chucking it down, but this soggy hand that is dealt to singer-songwriter, Amelia Lappert, is accepted in fine grace, and her songs of heartache shine nonetheless.

She’s followed by another young lady, whose songwriting has a mind-boggling maturity for her age. Hope’s full band, main stage set was one of the big triumphs of Meraki 2017. Things need to be mixed up, of course, and those who got there early enough in very wet conditions made the right decision. Hope still packs a punch acoustically, and her mix of covers and originals (Google the truly brilliant Sanctuary) serve as solar power for the stage, in lieu of sunlight. Her guitarist is one Seb Wesson — more from him later.

Simon McBride is another character who pops up all over the place throughout the weekend, and is arguably the finest guitarist at the festival. It’s no surprise that he gets the Main Stage rocking in a big way, as evening sets in. The increasing size of the crowd is becoming quite noteworthy at this point, with the following three acts being very special indeed. The Sunday evening headline slot may be the main ‘classic’ slot, in fine UK festival tradition, but Gabrielle makes sure to get that vibe going early on the Friday. It’s a slick performance, and the punters love every second of it. Hits such as Out Of Reach and Dreams go down an absolute storm.

It’s then time for the New Wave, as Nik Kershaw brings us a tantalising slice of the ‘80s for an hour. The sun may be setting, but Kershaw makes it very clear to us that he won’t let the sun go down. The besuited gentleman stands out among the sea of anoraks and ponchos, but everyone nonetheless comes together to sing mega-hits Wouldn’t It Be Good and The Riddle.

Before the main, main event, Judge Jules is once again tearing the Dance Tent (lovingly known as the ‘inflatable igloo’) a new one, with his famous brand of Ibiza Classics, many of which are given contemporary twists, leaving everyone’s limbs moving in maniacal fashion. He fully deserved his second Meraki call-up after last year’s exploits.

Make haste, though, to the Pure Shores of the Main Stage. There’s no doubt that All Saints were one of the biggest draws of the weekend, and that faith is restored in kind. We’re quickly transported from the ‘80s to the ‘90s, and the female foursome show why their comeback is so deserved. The audience may be here for the pre-millennium sing-a-longs, but a selection of material from their new album, Testament, mixes things up very nicely. Of course, Never Ever gets the biggest sing-a-long so far, and it’s wonderful to see the girls jumping euphorically as they perform Pure Shores. All Saints and the St Albans countryside are a match made in heaven. 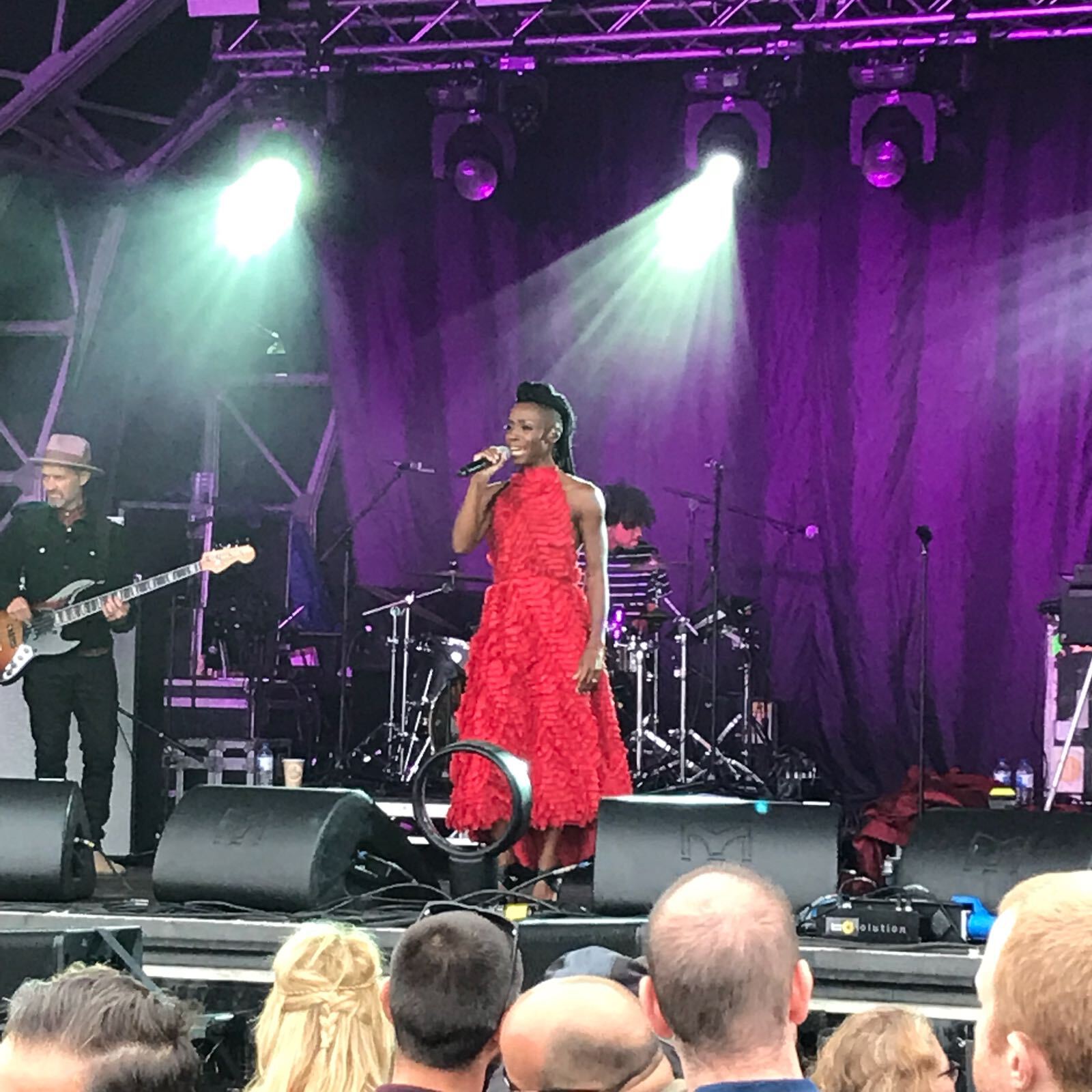 With the progression this festival is already showing, it’s very exciting to imagine where Meraki might be in five years time.

The Mr Peebles bus has plenty to shout about on Saturday, also — Anja, Russell, and Cara of the Rodford rock and roll lineage get things going very nicely with their acoustic trio, Arc. Their stripped back covers have seen them conquer the Hertfordshire live circuit, and on this evidence, it’s easy to see why. You may remember I mentioned that Seb Wesson had more to offer than merely accompanying Hope, and what an offering he gives with his mid-afternoon set. Is it divine intervention that the sun comes out? Seb’s heart-wrenching song, Tigers, written about his three daughters, is certainly divine. As are new songs, Lost, and Circles and Squares. One to watch.

Later that evening, we’re treated to one of the many things keeping Meraki weird and wonderful. In this case, it’s Boogie Storm, who have successfully set themselves apart from the considerable dance act competition by dressing up as Star Wars stormtroopers. In a word: brilliant.

The clouds cruelly open as Morcheeba take the Main Stage. No big deal, though, as the trip-hop act are so hypnotic; it’s almost as if the rain doesn’t exist. Singer, Skye Edwards, is such an imposing figure on the stage, and The Sea is one of the more mesmerising moments of the event.

Those that were hypnotised, are quickly snapped out of it — Saturday’s headliner is here with a mission to spread fun and enjoyment far and wide. And Pixie Lott is determined to do so in an outfit that isn’t appropriate for the drizzle, as are her muscle-bound, vest-wearing dancers. Pixie gets the umbrellas moving, and feet shuffling. There are some new songs that show great promise from the Bromley-born singer. The big sing-a-longs are saved for her jazzy-hits, Cry Me Out, and Mama Do; and the dancing becomes en-masse for closer, All About Tonight, as the Platinum Pixie herself reminds us to throw the drama away, and not worry about tomorrow. It’s an absolutely electric finisher from Pixie, who still has a Lott to offer (sorry...).

We may be on the final day, but Meraki hasn’t had its final say. It’s not even midday yet, but Jacket, a singer-songwriter who lives just down the road, is drawing people out of their tents. Jacket is the producer behind Hope and Seb Wesson’s huge tunes, but makes a big claim as an artist in his own right with this strong set. The haystacks have an increasing number of people sat on them, as Jacket’s songs, such as Identity, and Rut, draw more and more people in.
Some people are saying that rock and roll is dying. Not if legendary rocker, Don Airey, of Deep Purple, has anything to say about it. Don Airey and Friends have mostly been pieced together at a two days' notice, but we only know that because Don tells us. The virtuosic guitar and keyboard shredding is quite outrageous; and this is as close as Meraki gets to a mosh pit, with a number of people jumping around with great abandon.

They don’t simply like cricket; they love it. We knew this already, but can 10cc provide the end to the weekend that Meraki 2018 richly deserves? A significant crowd piles in to see their art-rock heroes. What follows is a stunning collage of light, sound, and musicianship. 10cc may be known best for some of their more humorous numbers, meaning that one can often forget just how incredible they are as musicians. Their Meraki performance serves as a timely reminder of that. The harmonies are outrageous, the instrumentation on point - they even move in sync. 10cc are not here just to serve up the hits, they’re here to put on a show.

I’m Not In Love is an unforgettable highlight, and Life Is A Minestrone also draws roars of approval. Dreadlock Holiday is a ready-made festival anthem of epic proportions, and the only bittersweetness comes from the band leaving the stage when they finish the song. Not to worry, they’re quickly back for a brilliantly unconventional encore; Donna is performed A cappella, before Rubber Bullets is brought out in full rock glory.

And that’s that — all good things must come to an end, even those infused with magic. With the progression this festival is already showing, it’s very exciting to imagine where Meraki might be in five years time. Get yourself to the next one, so that you can say you were there before it inevitably explodes.