It’s a frosty Sunday afternoon in Shoreditch, in London’s East End. I’m gleefully making my way to the Green Room at Hoxton Square Bar & Kitchen. As a music journalist, I’m always grateful to just be put in a room with an artist to chat with them about music making, but today, electronic/dance music maestro, Giraffage, and a bunch of other journos, are taking part in a sushi-making masterclass with Sushi Queen. Giraffage’s PR team, knowing well of his deep love of food (particularly sushi), have masterfully made his press day one hundred times more fun.

Giraffage is the artistic alias of Charlie Yin, a dance music producer with a uniquely experimental leaning. Since putting out 2017’s Too Real, this San Franciscan young man has been touring Europe. Before leaving London, there’s the small matter of becoming a sushi master to get out the way. While us mere mortals make a slight mess of our array of rice, seaweed, avocado, and soy sace, Giraffage follows Sushi Queen’s teachings to the letter, and it would appear he’s as gifted with food as he is with making succulent beats.

With happy and satiated bellies, we find a corner to have a chat about his recent exploits. As Giraffage’s love of food is quite the opposite of a secret, I ask him if he feels this sensory pleasure is similar to his love for creating music.

“I think so, yeah,” he says. “It’s like getting in touch with your senses! Really good food inspires me, in a weird way, creatively. I appreciate the artistry of food, which is one of the reasons I like sushi so much.

“It’s my first foray onto a major label,” Giraffage continues, as I ask about his latest record, Too Real. It’s his first release with Counter, an imprint of Ninja Tune. “I’ve had a great reception so far, and it’s been going great.”

There haven't been many new tunes since that late-2017 album release, as Giraffage isn’t someone who combines touring with writing.

“I really need to recharge from touring before I can get back in the studio,” he confirms. 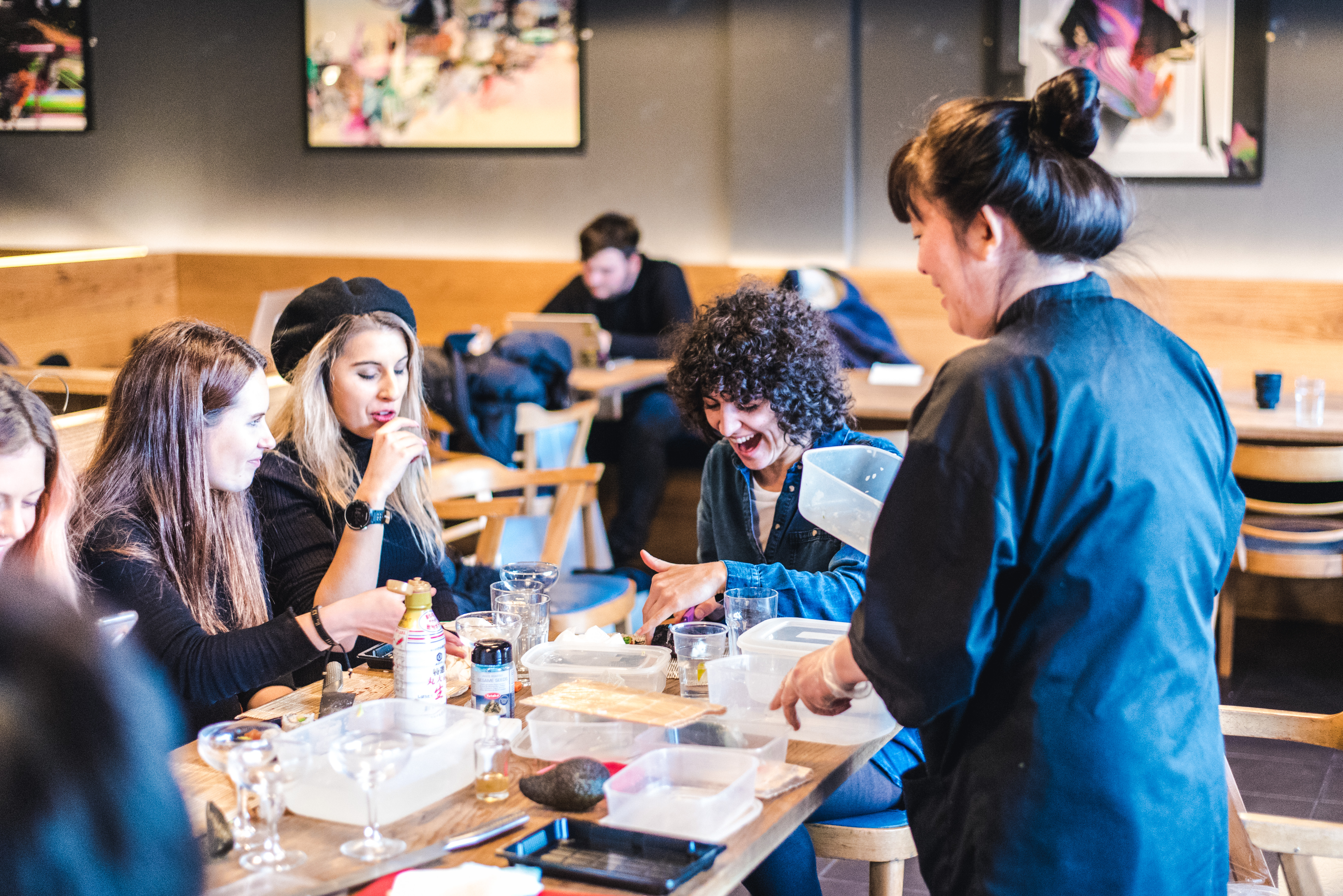 I appreciate the artistry of food, which is one of the reasons I like sushi so much. Giraffage

Instead of asking the usual questions about tour antics, I ask where he’s had the best food, knowing it’s the way to his heart.

“I did Helsinki, Brussels, Copenhagen, Harlem, and some more that you might have to Google! [laughs] Brussels was really fun — it was in a weird dome next to the Botanical Gardens, and everyone there seemed really stoked to be there, dancing really hard.”

I correctly suspect that Belgian cuisine does come into it.

“I had some amazing spaghetti from this place that was open until 1am,” Giraffage reflects, with a smile.

Giraffage recently relocated to Austin, Texas, from his home city of San Francisco, so I’m keen to know about his new studio.

“I haven’t had much time to mess around with it yet,” he says. “But I recently got a Korg Monopoly synth, which is so much fun to mess around with. I use a lot of Waves plugins for effects processing — I use the L2 limiter frequently. It’s like a guitar processing unit, but I put it on a bunch of my synths! With Waves, it was just a recommendation from a friend, saying that they sound the best, and I've absolutely stuck with it.

“I use Ableton Live a lot, and I’m really happy with some of the stock effects, like the reverb, which I use on everything. I use their compressor loads. I used Reason for a few years, but as I got more and more into sampling, I got into Ableton — I’ve learned the workflow, and it’s the most comfortable DAW I’ve used."

This Summer is set to be a very special one for Giraffage, as he’ll be playing Coachella, America’s biggest music festival, for the very first time.

“One of my goals when I first started was to play Coachella,” he says. “It’s pretty crazy, and surreal, that I’m playing it this year. It’s been about five years of making music as Giraffage, and Coachella is happening already! Other than that, I just want to keep making music for myself, and never compromise my artistic integrity.”

I strongly suspect he’ll never compromise his gastronomic principles along the way, either.