Black Pumas: "We Started In The Studio. That’s Our Happy Place"

A supernatural musical connection was realised the day busker, Eric Burton sang ‘some gibberish’ down the phone to guitarist and producer, Adrian Quesada. Together, they are the Grammy Award-nominated Black Pumas. Headliner hotfoots it to Rough Trade Records to meet the formidable musical force destined to fill out much bigger venues.

The day the 2020 Grammy Award nominations are announced, I hear what surely must be a timeless soul song blazing over the airwaves. A track that makes you stop what you’re doing and listen, Colors turned out not to be a quintessential ‘70s Blues track that had seemingly escaped my ears’ attention my whole life, but the second single to come from Austin-based psychedelic soul band, Black Pumas.

Fronted by singer Eric Burton and guitarist and producer, Adrian Quesada, the duo formed in 2017 after Quesada found the singer he had been searching for in Burton, who at the time was busking in Austin, Texas. A friend of Quesada’s happened to pass Burton’s busking spot, and wasted no time in recommending him. A call was set up, and Burton sang down the phone – although it took him a while to get round to it.

Meeting the duo at London’s Rough Trade Records directly after a mini set and packed vinyl signing session, Quesada and Burton remember how they started out:

“I sent Eric a few instrumentals to get the collaboration going,” Quesada recalls. “I checked out his songs, and I had already recorded some of my own. I'm like, ‘hey, here's the vibe’. It took a couple of weeks for him to get back to me at first, and I was like, ‘Man, this guy's not into it!’ But eventually, he called me and he sang Fire. He was playing in the background and singing, and I was driving to a gig. I couldn't hear it that well, but the whole energy behind it and the vibe…I was like, ‘man, this guy's incredible!’ I loved the whole interaction.”

A studio session was eventually set up, where they recorded Fire and Black Moon Rising – both which are featured on their self titled debut album, released in 2019. 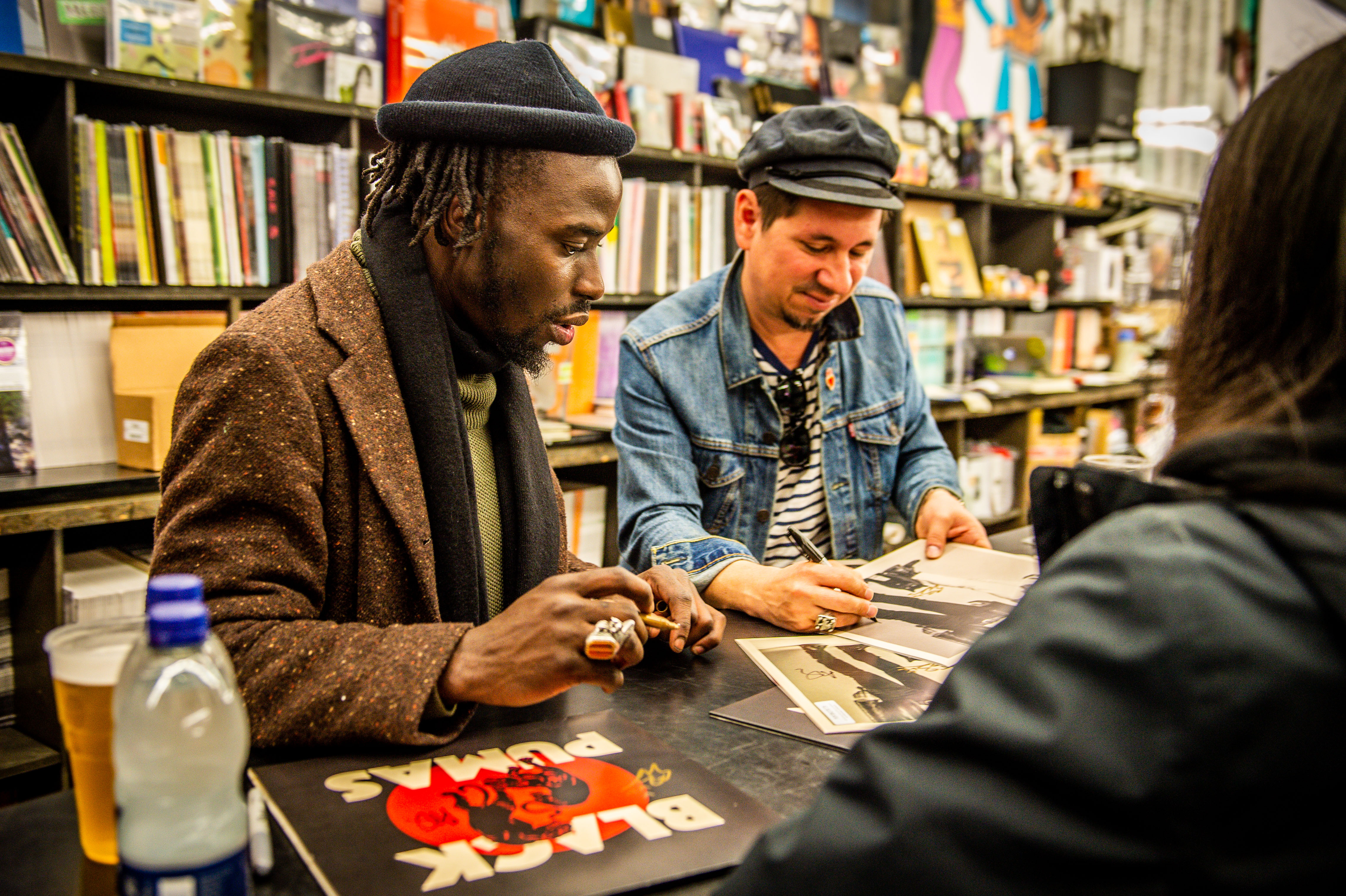 We started in the studio. That’s our happy place. Adrian Quesada

“It's funny because a lot of people think that we set up an audition by way of phone, which is a very cute idea,” smiles Burton – quickly adding that he hopes that doesn’t sound too facetious.

“I get very excited about the things that I'm working on. And I'm very apt to just call a friend up and say, ‘Hey dude – check this out; I really like this idea. Am I crazy?’ And I did that to Adrian, not knowing him. Which should give you some insight as to what he was inspired by. I guess it was my forthcoming energy in that way. I sang some gibberish over the phone and he was just like, ‘Yeah, sounds good! Come tomorrow?’”

Calm and pensive during our interview, Burton speaks poetically in a warm, soulful voice that hints at his vocal prowess (which Headliner bears witness to later that evening at a sold out show at London’s Islington Assembly Hall), taking his time to answer and sometimes losing his train of thought in the process; Quesada gets to the point right away, speaking excitedly and quickly.

On stage, their roles reverse: Burton the showman surges with a humming energy, leaping about the stage (and often into the delighted crowd) whilst effortlessly filling the venue with his electric, soaring vocals, while a mellow Quesada leaves him to it as he holds the groove down.

No connection to The Black Panthers, “it just sounds cool,” they insist, Black Pumas was born – the name made all the cooler due to the way Americans pronounce the word ‘puma’. The result is a polished, timeless-sounding debut album fusing the duo’s combined influences of ‘70s soul, rock and roll, gospel, hip hop and funk, with influences drawn from Ghostface Killah, James Brown and Sam Cooke.

Burton’s sublime vocals aside, Quesada’s slick production is key to their sound. Having been a member of Latin funk band, Grupo Fantasma when it won a Grammy Award for Best Latin Rock, Urban or Alternative Album, he had already laid the foundations of what would go on to form an essential part of the Black Pumas’ sonic vibe. 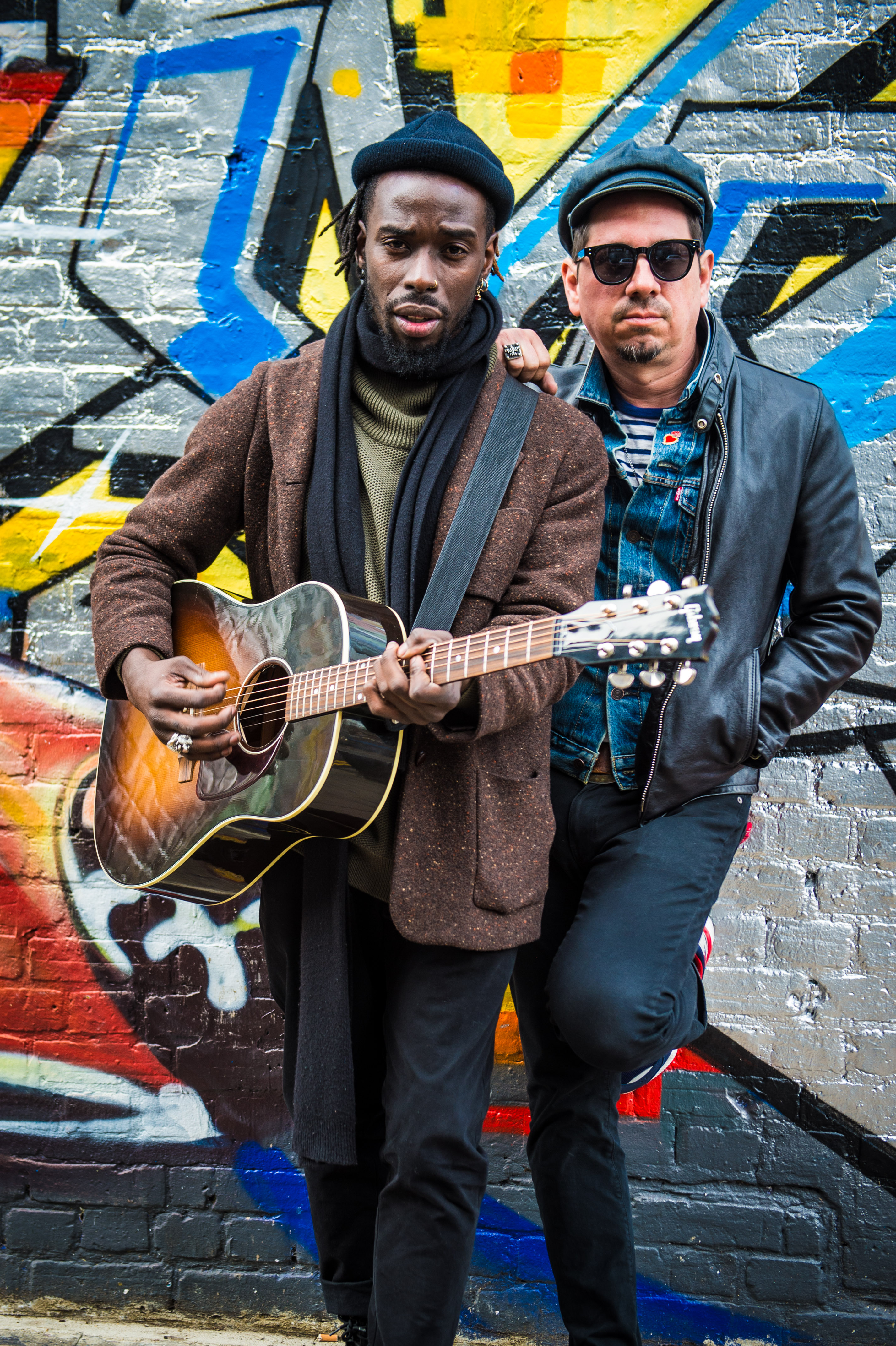 I know I get on my bandmates’ nerves because I'm super detached. Eric Burton

Most bands start out live, then head to the studio – but not the Black Pumas. This is a studio band that expertly made the jump to a live band – and a damn exciting one at that. The record has a live feel to it, and such is the skill of the duo, their band and their backup singers, that their live sessions sound impossibly good, bolstered considerably by Burton’s vocal dexterity.

“It started out of the studio, versus some live bands that eventually go and make an album,” notes Quesada. “We started in the studio. That’s our happy place.”

An almost unspoken creative understanding between the pair quickly became evident when they started recording together.

“Eric was the only person where I was like, ‘I want to work with this guy,’ but originally we just had a few songs,” Quesada recalls. “Then as we started to get some momentum and had fun working together, he was showing me his songs. He's a prolific songwriter. So I was like, ‘those songs actually work well with these songs’. That was the early process, and when we officially became the Black Pumas, we started arranging his songs for this sound in this band, and it just all fit like a glove.”

“As soon as we met each other in person for the first time, we were just ourselves,” Burton agrees. “I came into the studio at Adrian's house and I had skeletons of a few songs that I was prepared to freestyle over. Adrian presented these tracks, and I didn't think that we would make anything too big of it. I thought maybe this might earn some catalogue spots…”

Far from it. The outcome is a retro sound that is not contrived, but rather a natural result of the duo’s fusion of their particular influences and styles.

“It was so natural,” nods Quesada. “At first, Eric was trying to figure out how to sing along to somebody else's songs, but I felt like everything he was doing sounded amazing – even on the first take, you know? Everything was working perfectly; there was a little bit of all the things we like: his love for storytelling, folk music and rock and roll, and we both love hip hop and classic soul. All of that just was just super natural – not supernatural – super, very natural. Maybe a little supernatural,” he laughs.