Headliner recently paid the legendary studios a visit to hear from the team behind the new room, which as part of an exclusive content deal with Amazon Music, will become the streaming services’ UK-based HQ for immersive mixing.

From finding partners for live streamed concerts and mixing 3D audio for theatre shows to working with TV and film production companies on enhancing new and catalogue audio recordings, the impressive scope of the studio’s technological capabilities will provide the arts with a wealth of creative opportunities.

The control room pursues an ambitious and flexible ‘hub studio’ approach, enabling freedom from dependence on any particular mix hardware so that those using the studio can bring their own mixing console. With all the loudspeakers around the room arrayed at 30° of separation to each other, the new studio’s comprehensive immersive audio monitoring is designed to cater for all surround formats, including Dolby Atmos. 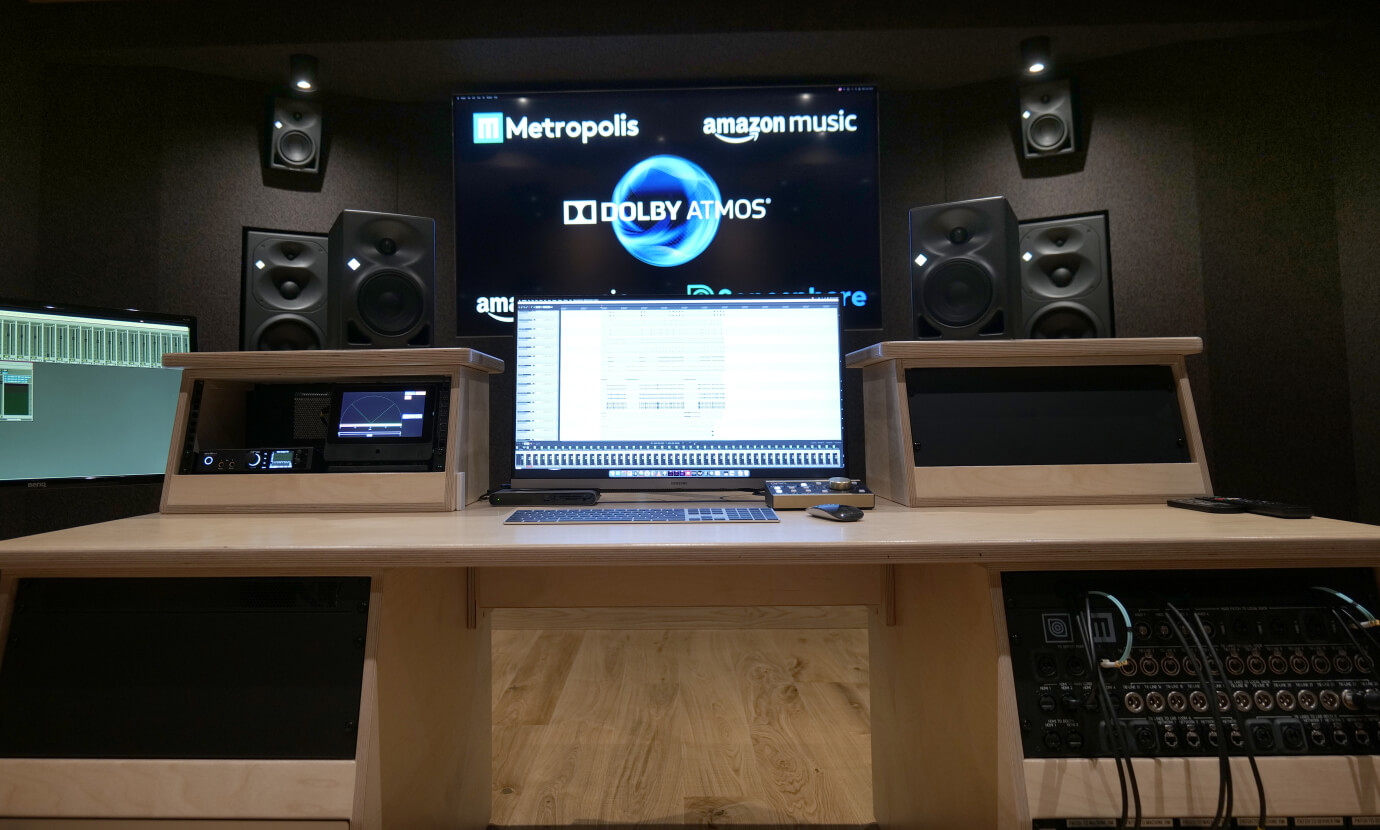 Metropolis teamed up with immersive content expert Sonosphere on the design and specification of the new studio and to support its creative mix workflow. Upon completion, the teams were most pleasantly surprised to discover that the room is the highest resolution Dolby Atmos room in the country, although Sonosphere commercial director Jamie Gosney insists that this wasn’t the main objective:

“We just wanted the studio to be everything for anybody who wanted to ever use it,” he tells Headliner. “What we’ve effectively done is create an 11.1.8 room, which doesn't officially exist yet. But it just means that when we're working in Dolby Atmos, we can do so in much higher resolution.”

Just one of the plans for the new immersive room is to use it for broadcast purposes, with it’s incredibly high spec providing seemingly endless possibilities for live, hybrid remote production events using a built-in 5G network as the backbone.

One of the issues that theatre sound designers often experience, as Gosney explains, is the fact that they usually have to set up makeshift systems in makeshift locations in order to program immersive shows:

“This speaker system can be anything anybody wants it to be because of the processors we're using,” he says. “So we can create presets for different configurations and they can bring in whatever desk they want to program their show here and translate it back to the theatre.

“The other thing is, we've currently got a fibre leased line between here and Brighton Dome, with another currently being put in between here and the O2 Arena,” he continues. “Eventually we want to be able to tap into Hammersmith Apollo, and do live shows from there. As well as renting out the venue, we can also rent out a virtual venue, host a live stream on our platform – which is currently being built with blockchain technology – and then everyone benefits from increased ticket sales.” 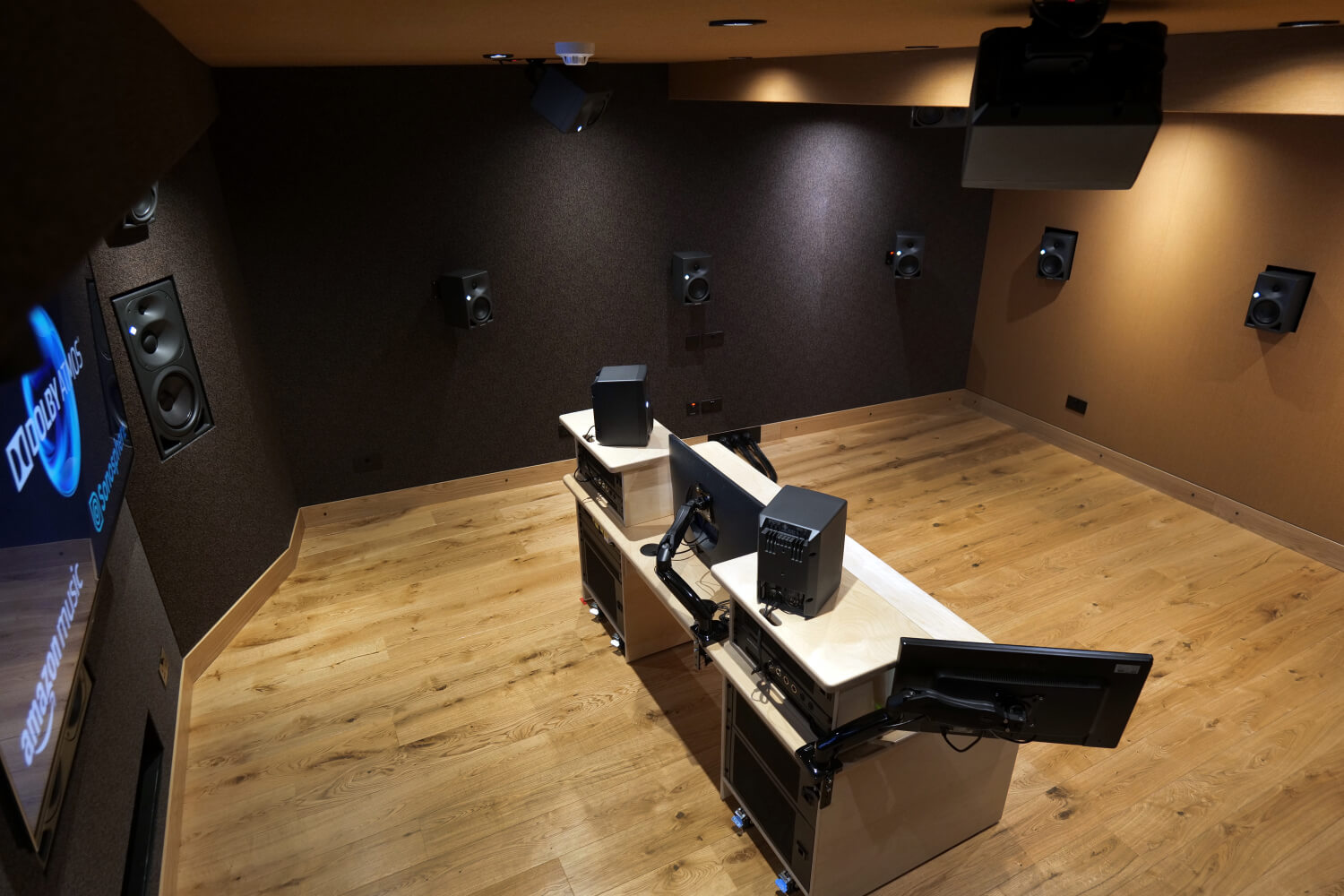 You bring artists into this room and they go, ‘oh, wow’ Jamie Gosney, Sonosphere commercial director

One thing for certain is that the new immersive facility is taking Metropolis as a business to an entirely new level. While it was always of utmost importance to invest in the latest technology, this stunning new room also serves as the perfect environment to demonstrate the incredible capabilities of that technology.

Three Neumann KH 420 G tri-amplified monitors are soffit-mounted to the front wall (with one KH 420 horizontal, beneath the video screen), while twin Neumann KH 870 400W subwoofers flank the three-way monitors, with deep bass response to 18Hz.

A key mission was to ensure clean and extended low frequency from the twin subwoofers, with the required isolation to accurately judge tone-shaping a full octave below the effective range of many monitoring systems. Surround monitoring meanwhile is handled by 17 Neumann KH 120 compact bi-amplified studio monitors, renowned for uniformity between units, and with a ± 1.0dB linearity deviation between 100Hz–10kHz.

“Everyone who’s come into this room has been blown away,” reveals Metropolis Studios’ brand director Gavin Newman. “And while it may seem like an interesting choice to have gone down the Sennheiser/Neumann route, we're an independent studio, and we’re championing things that we believe are the best way to present material as opposed to what everyone else is doing.”

Gosney adds: “We’ve always had a tie up with Sennheiser, helping to develop their AMBEO workflows etc., so we just got used to listening to their speakers, and decided that they would make the best fit for this new room.” 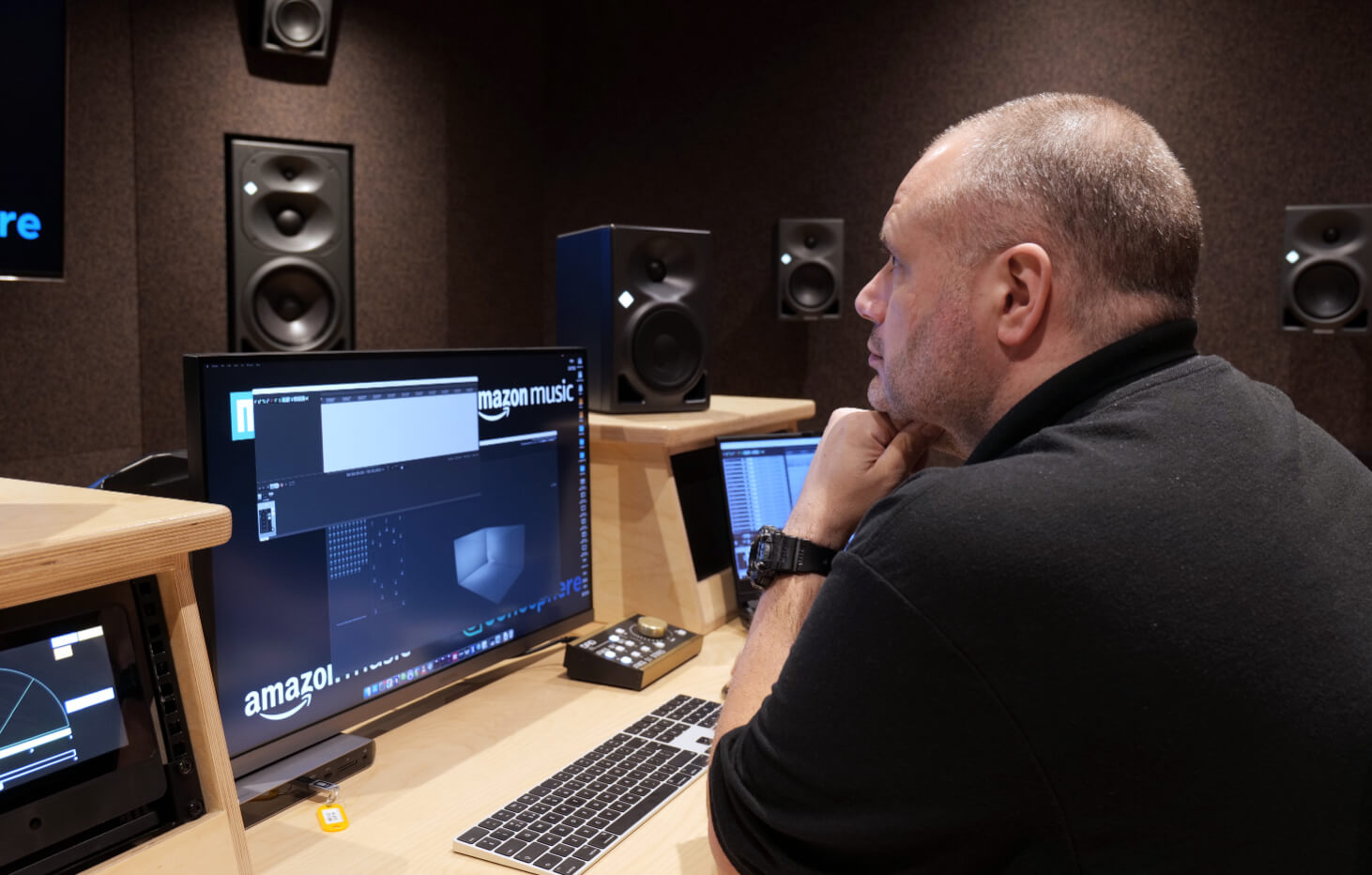 Sonosphere mix engineer Phil Wright (pictured above), who was also integral to the room’s design, explains a philosophy aimed at enabling mix work not only for Dolby Atmos, but for any immersive format:

“We decided on three loudspeakers across the back wall, with all the loudspeakers around the room arrayed at 30° of separation to each other, so the setup was completely symmetrical for doing third-order Ambisonic work. Atmos is more ‘front-centric’ so one of the rear loudspeakers will not be in use, and two of the others will be electronically adjusted for Dolby using a DAD AX32 monitor controller. The AX32 enables any number of virtual room presets to be optimised for different immersive formats.”

While at the studio, Headliner was treated to an exclusive preview of an upcoming Jack Savoretti Amazon Original, which was recorded in the new room just a few days prior. Wright explains how a DiGiCo Quantum 225 was brought in solely for this purpose:

“Essentially, the Dolby renderer is accessed via Dante, and we can use any kind of DiGiCo input device that we want, whether it's an SD rack on fibre or a Dante DQ-rack on Cat-6. We then output all the stems from the DiGiCo into a DAW, which is doing the recording and also provides the Dolby Atmos panner.

“We had the Quantum 225 in Live Room A taking mic splits from the studio’s microphones, but in addition to all the close mics that were on the instruments and vocals, we had some room mics that were very kindly provided by Sound Network,” he continues. “DPA were very keen to work with us on being able to record the lovely spaces in Metropolis, so rather than having to use artificial reverbs, we were able to make real space recordings, bring them in through Dante, and then I could mix them on the console.” 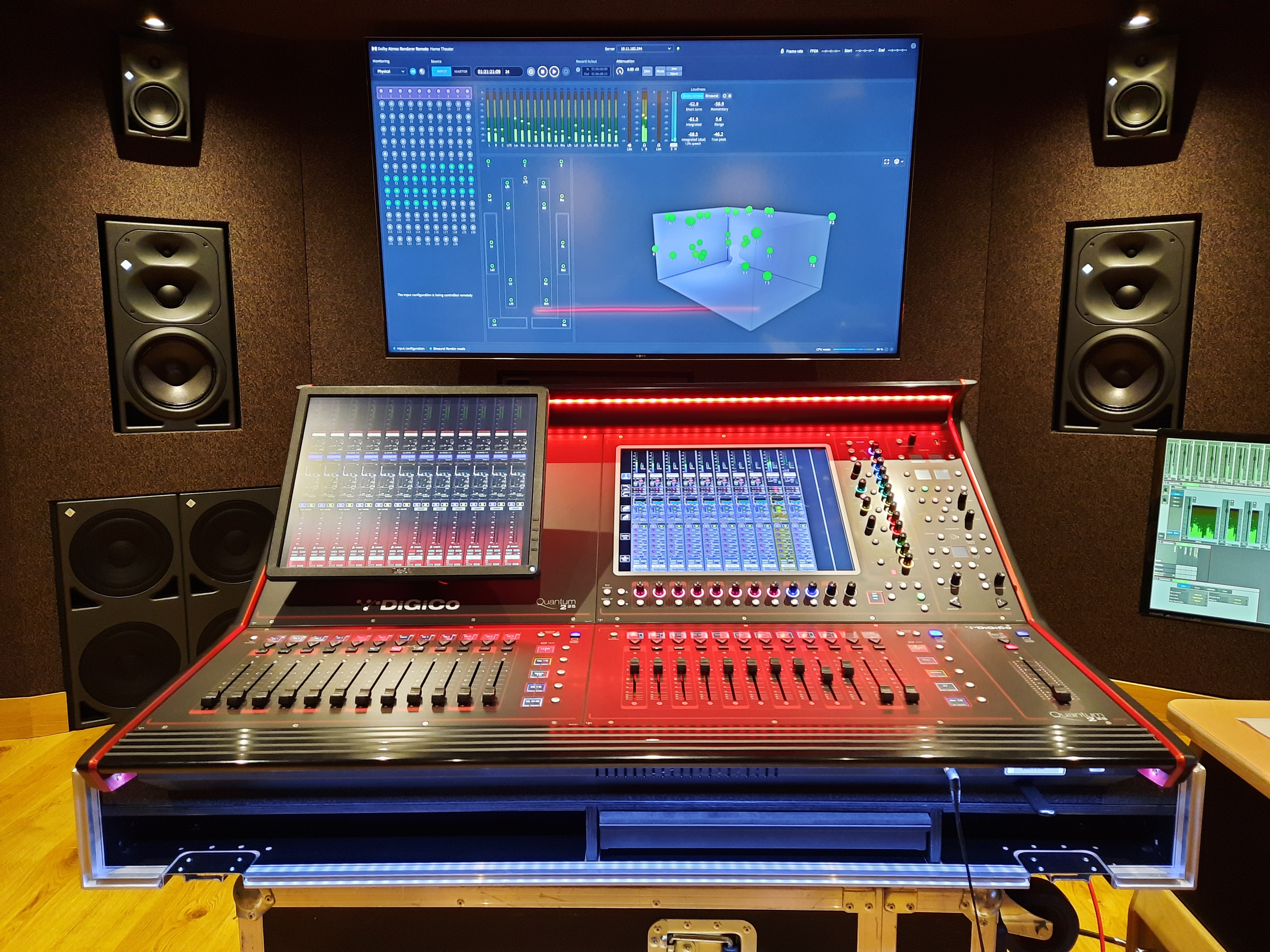 And with an extremely high percentage of immersive content currently being consumed on headphones, the ability to generate all the overhead and behind information that is missing from a stereo image using a binaural rerender of the Dolby Atmos remix means that much more up close and emotional versions of musical or theatrical content can be created.

Headliner proceeds to ask the team what they’re most looking forward to about the new venture:

“We're talking about getting into doing art installations, much like the David Bowie and Pink Floyd exhibitions that have come and gone,” shares Newman. “Think about if you were able to repackage that as a video and audio VR experience, where it could live forever more in incredible quality.”

“I’m really looking forward to doing the first proper live broadcast here, which will happen very soon, as well as doing the live sessions,” adds Gosney. “I think it’s a really exciting premise that artists can be doing something in a different studio and are just aware of the stereo, and then you bring them into this room and they go, ‘oh, wow’.

“One of the great things about this whole project from start to finish was the trust that Metropolis put in us as Sonosphere. Being in a studio like this, which is such an iconic place and has such a long history, is exciting for us to be part of. But I also love the fact that we’ve all built this incredible relationship over the last year; it's a project where there's been an awful lot of love involved.”