Minsk Arena’s main space is an ice arena dedicated to hockey and skating which can also be converted to host other sports events, as well as concerts, conferences and forums. The facility recently completed a large-scale renovation which included a tour-grade audio system from L-Acoustics, installed by BelCultProject.

As a multifunctional venue, Minsk Arena hosts some of the most notable sports tournaments, including IIHF World Championship and SU World Junior Figure Skating Championships, as well as hosting concerts from musicians like Elton John, Sting and Shakira.

Known for its contemporary design, Minsk Arena also prides itself on implementing the latest technology, including being the first arena to install a cable roof system capable of withstanding loads of up to 120 tonnes, with special sensors monitoring cable tension 24/7.

The venue also features an eight-faced plasma screen video cube – the biggest in Europe. When it came time to update sound technology, the arena’s management mandated that the facility stay at the forefront, requiring a sound system that would significantly improve the audio quality and provide optimum coverage throughout the venue and across its diverse range of events.

“The key challenge was to ensure the system can be used for big sporting events, such as ice hockey and ice-skating championships, and then, with minimal effort, be transformed into a full-blown concert audio system,” explained Yuri Mihailovski, chief financial officer at BelCultProject.

“When choosing the audio brand, we never doubted that it should be L-Acoustics, as the company is a market leader when it comes to sound quality, control and tuning, with its K2 solution being ideal for bigger venues and large-scale events, such as those hosted at Minsk Arena."

Using Soundvision, L-Acoustics 3D acoustical modelling and loudspeaker system design software, the team designed a tender-winning system configuration that offers complete coverage throughout the hall and ensures every visitor gets the best sound experience, BelCultProject worked together with L-Acoustics application engineer, Sergey Becker, who travelled to Minsk especially for the installation and system configuration.

Apart from delivering and installing the L-Acoustics system, BelCultProject also developed a new winch-driven automated rigging system and aluminium structures at the Arena, as well as optimising the suspension points of the audio system. 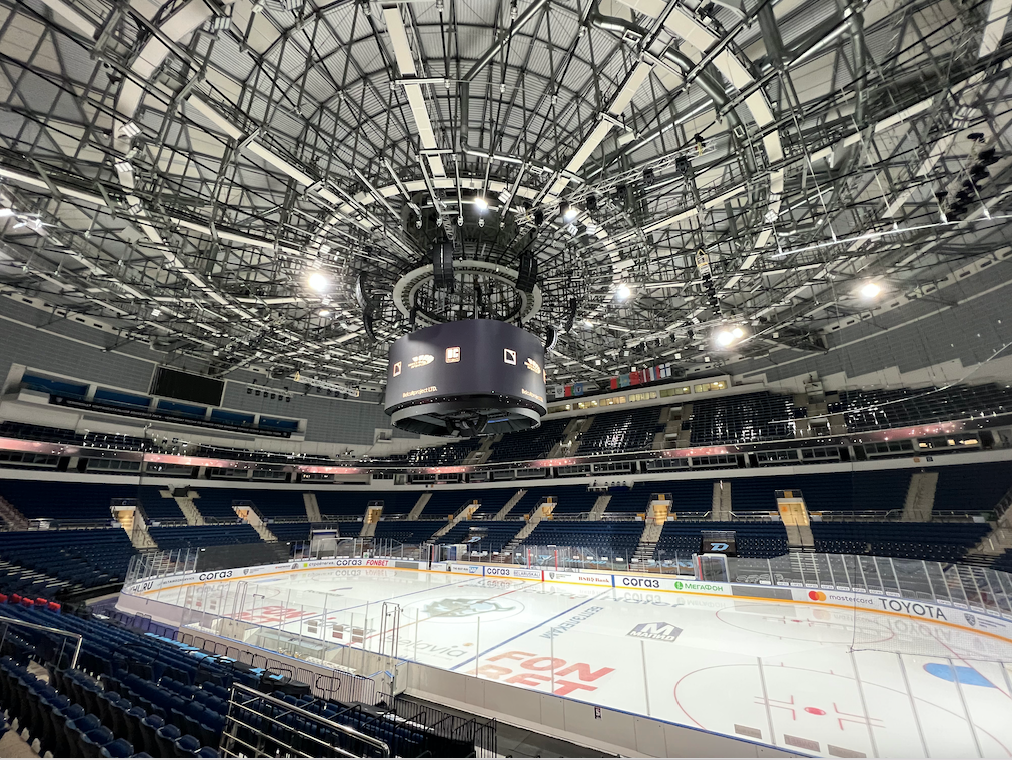 The final system consists of eight K2 hangs positioned just above the video cube and pointing towards left and right sections of the tribunes across four main sectors of the Arena – A, B, C, D – with each sector having its own separate entrance.

A and B sectors are covered with four nine-cabinet K2 arrays, with a further four hangs of seven K2 deployed for tribunes C-D . For ice hockey and basketball games, a retractable structure is added underneath the screens, with two hangs of three A15 Focus facing the opposite ends of the Arena (C-D) as well as four A15 Wide hung in the middle and facing the playing surface.

“L-Acoustics K2 resolved the key challenge of delivering optimum coverage across a wide range of events. It’s also extremely rider-friendly, with no better solution found in any venue in the entire Republic of Belarus,” explained Mihailovski.

“This is an important achievement for everybody involved. It keeps Minsk Arena at the forefront, with its new sound system fully capable of delivering the highest level of audio for any world sports championship, conference, or spectacular live music show.”

Minsk Arena’s new sound system is already in use and, most recently, the Belarusian national ice hockey team kicked off their training camp there.

“Minsk Arena is definitely one of the most prestigious projects that BelCultProject has completed in our more than 20 years in business in the Republic of Belarus and abroad,” concluded Mihailovski.

“This particular project is exemplary when it comes to effective teamwork, both between us and the Arena team, and the support we received from L-Acoustics has been outstanding.

“In the end, we were able to deliver a world-class audio solution, with clear and powerful audio that is perfectly distributed across the entire hall. We also ensured, together with Sergey, that the Minsk Arena technical team is fully trained on the new system and is comfortable deploying it for any kind of event.

“We are incredibly thankful to Minsk Arena and their entire team for the support and active participation in this project. It’s simply incredible knowing that such an iconic venue is now equipped with the very best in sound, meaning it has increased marketability for event production and is future-proof for the many years to come.”