Headliner recently got hold of MIPRO’s MI-58 Series to discover how useful this digital IEM system can be for personal and professional stage monitoring...

This was my first experience of a MIPRO radio device, other than a couple of the UHF version IEMs turning up at the side of a festival stage with some of the acts I worked with earlier in the summer. In all the haste, I only got a minute to work out how to alter the frequencies and check they were working before handing them to the relevant musicians. What I do know is that those that own MIPRO kit, swear by it!

Firstly, a little about the 5.8GHz (5725 - 5850 MHz band) which is a licence-free ISM (Industrial, Scientific and Medical) allocated band providing 150MHz of bandwidth. It’s one of the bandwidths your dual band WiFi router utilises; the one that while noted for having a more localised coverage area than the 2.4GHz, transmits data at faster speeds.

Within the 5.8GHz band there’s scope for multiple high speed channels and within each channel are locks for multiple streams. This means there should be more than enough capacity for running as many sets as you require for most band and theatre applications, with a total of 64 IDs across all MIPRO 5.8GHz kit.

The system consists of the MI-58R body-pack and the MI-58T transmitter. The transmitter is a half-U that can be rack mounted or paired and rack mounted with optional kits. Inputs to the transmitter are by way of a pair of analogue balanced line-in XLR or TRS jacks, while there are also a pair of loop out TRS jacks to daisy chain further devices. For the digital purists, there’s a Dante option – the MI-58TD. 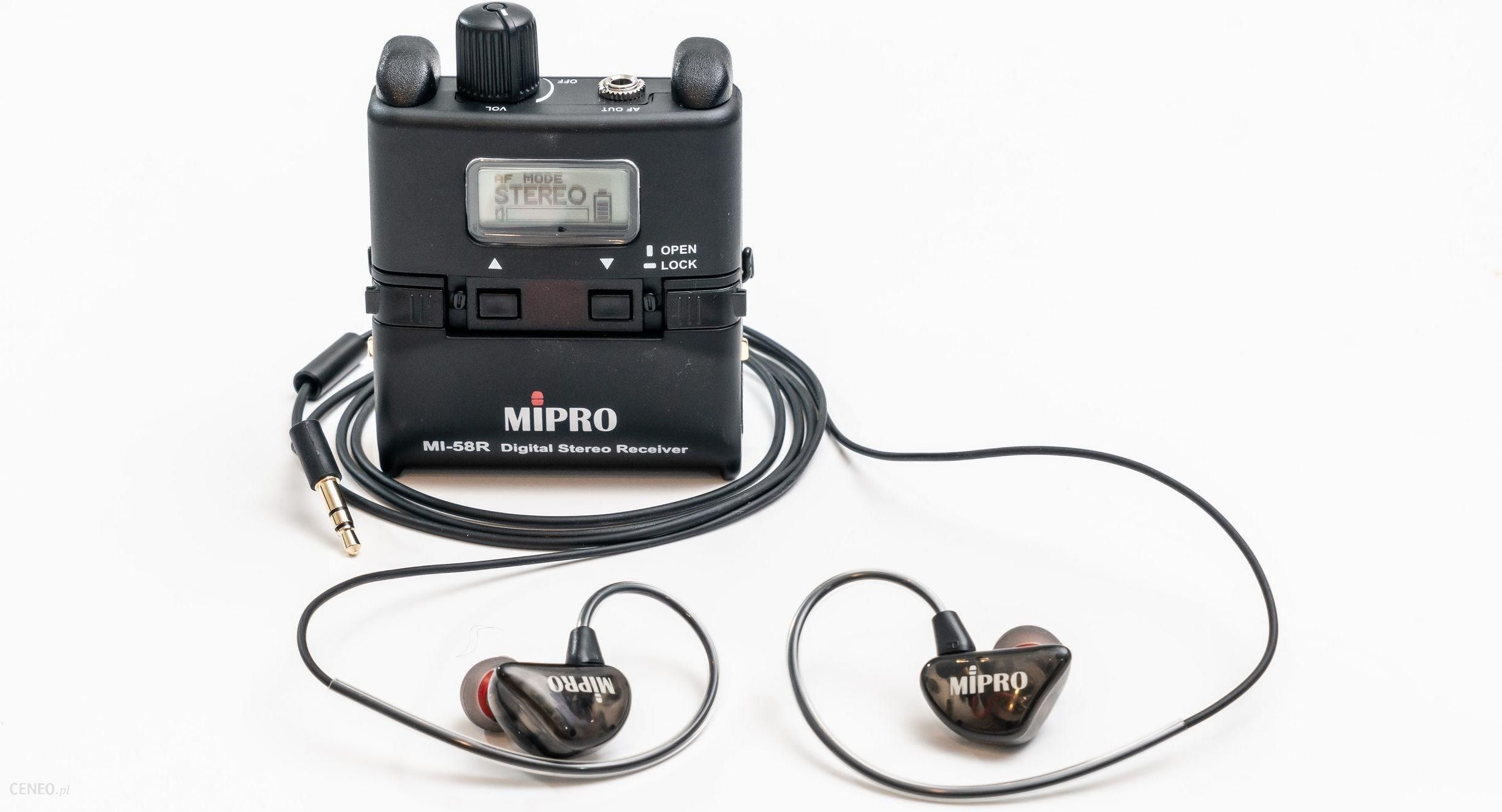 The transmitter seems well built, sturdy, and able to withstand a certain amount of abuse despite its light and compact footprint. Sample rate for the audio conversion is 24-bit at 48kHz. Latency is fractionally over 2ms. Power is supplied via an external 12v PSU and the transmission power is limited to the European permissible standard of 25mW for PMSE equipment.

The MI-58T’s front panel is actually a bit of a revelation compared to similar products in this price range. For starters, the display is really easy to read even at a distance, especially in the dark, but just as easy under strong light. The OLED screen gives you left and right level readings, Group, Channel and ID settings along with AF input source, stereo/mono mode, RF on/off and lock on/off. There are also LED indicators to the left for each channel that indicate a low, good or peak level. Below this are independent level up or down controls for each channel.

To the left of the transmitter’s front panel is a monitor section equipped with both 1/4 inch and 1/8 inch jack sockets and a volume pot. I strongly advise making sure the volume is turned down before you plug in any headphones etc. as this is a pretty potent headphone amp! On the far right is the menu select rotary with push to select. Next to this is the ACT button which is a means of syncing transmitter to receiver, which took a mere second every time I re-synced settings, IDs etc. The ACT control system is also available from a web browser by daisy chaining multiple units together via a MIPRO MES-100. I personally would have preferred an RJ45 rather than the RJ11’s on the back of this unit, as these days most engineers already run some form of Cat5e or Cat6 with a Cisco switch or two.

The bodypack is light and compact. A fair proportion of the weight is the rechargeable 18500 Li-Ion battery – again a bit of a revelation at this price point. There are contact points on either side which allow it to be slotted into one of MIPRO’s handy charging caddies. It took around two hours to charge up, but it still had a little charge left when it went in. More impressive was how I was able to write a review, walk around my house, make lunch, miss numerous phone calls and as day turned to night this pack was still going strong. I reckon I probably had a good six hours of listening, at which point the battery was still showing two bars – more than enough power for rehearsal, soundcheck and the gig. At one point I was trying to locate some boxes in my cellar, which is below huge slabs of Yorkshire flagstone, two floors and a couple of walls away from the transmitter. I had the odd glitch while descending the brick wall enclosed staircase to the cellar, but once underground I had surprisingly stable reception.

Any system that can provide more air to what can sound like a closed and claustrophobic environment, I very much welcome.

This system is also unaffected by other radio equipment in close proximity, something which can and has rendered other systems almost completely useless in a professional environment. To this end, I waved a selection of other radio transmitters next to this pack, imitating what a singer is very likely to do during a performance. I tried UHF kit on both channel 38 and the old licence-free channel 70 for those still carrying that trusty old faithful. Nothing seemed to phase it, excuse the pun.

The combined system boasts an extended frequency response of 20Hz to 23kHz, which to appreciate would depend more on your age and what you plug into it at either end. However, any system that can provide more air to what can – in other systems – sound like a closed and claustrophobic environment, I very much welcome.

I kind of assumed the supplied in-ear buds were a bonus in this price range, so was pleasantly surprised when they turned out to be quite reasonable. They have a similar design to the Sennheiser IE100 and 500s I looked at earlier this year, which all feature a single miniature transducer-style driver. If you don’t yet own your own set of custom moulds, then these are as good a place as any with which to start your IEM journey, and even if you do, these make a very useful backup.

We recently headed into the studio and let Headliner’s very own Grace McGuigan try them out, so make sure to check out the video on the Headliner Hub YouTube channel:

The most important thing is how do they sound, right? It doesn’t really matter how cost-effective they are if the quality of sound isn’t up to par. Actually, I was very impressed – not only did they sound superior to many UHF systems in the same price range, but the tight, clean bass and crystal clear highs even from MIPRO’s included IEM buds put some far more expensive systems in the shade. Having a range of custom mould IEMs and generics to really put the MI-58R through its paces also proved that this receiver stands up in its own right, and is not just a piece of digital hardware that’s been optimised for use with its own set of earpieces.

It’s loud, I mean properly loud, and actually seems to favour multi-driver IEMs like my custom JH16s or the generic Roxannes, which in flat mode are superbly detailed and distortion and artifact free. I was genuinely impressed with not only the sound quality but the stability and performance level of the receiver unit; accidentally waving a UHF handheld mic against it had no effect at all. 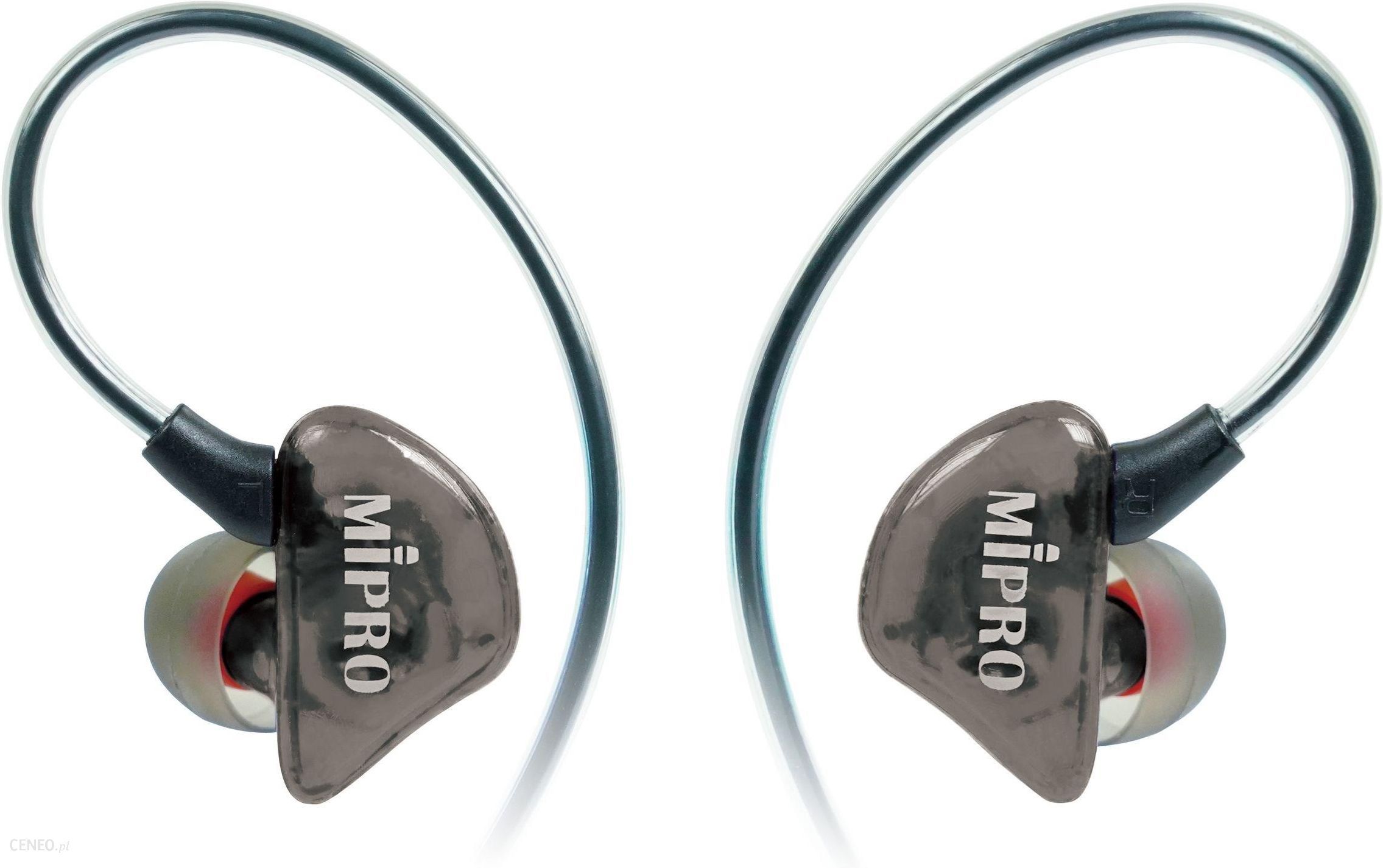 Lastly, the build quality is pretty good, and for those who are buying it for their own personal use, and are more likely to look after it, this is a great device. When I did accidentally drop it, it was light enough that it didn’t pull out the set of moulds I was wearing at the time, which actually broke its fall inches from the floor. I then dropped it a second time, also accidentally, from waist height onto my living room laminated floor; not a mark on it!

I did notice that the plastic case is more of a shell in detachable sections via tiny screws. If these parts become, or are available as accessories in the same way as the rechargeable batteries and caddies, then the MIPRO MI-58 system could be a product well worth considering as hire stock. Honestly, it sounds that good!