I’ll be honest. When I was asked if I would review these two mics, I was a little reticent. I was finding it hard to believe that a condenser for a mere £160 and a USB condenser for half that price could be anything other than a couple of budget mics. I was also aware that the previous incarnations of Neat microphones had a color scheme that more closely resembled a wasp than a bee, and as such, had prompted some potential customers to avoid getting stung by giving them a wide berth!

However, when these two mics landed in my studio, I failed to detect any audible buzzing. So my question is, is there yet a sting in this tale or are these mics bringing home the necessary nectar to make honey? 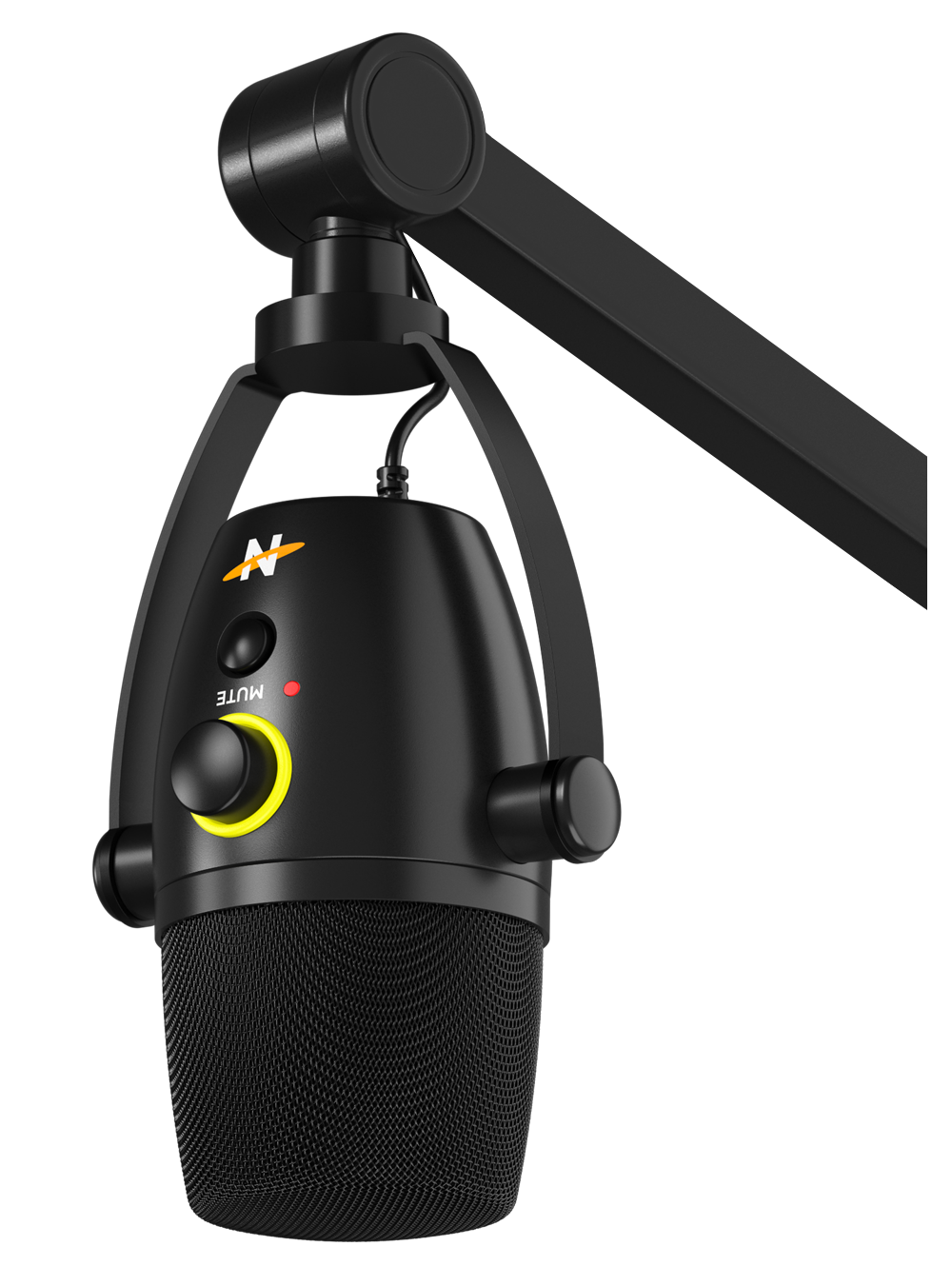 Neat Microphones are a subsidiary of Turtle Beach, the gaming headset people. This may explain why much emphasis has been placed on the aesthetics of these products and may also explain why you get such a clever feature set in such a reasonably priced product. Firstly, I decided to check out the Bumble Bee II (BB2) as my trusty old extended wired Apple keyboard has a couple of handy USB ports right there in front of me. After plugging the mic in via its supplied USB-C to USB-A cable, a reassuring yellow light appeared around the single rotary on the face of the microphone and simultaneously, there it was in both the input and output sound menus in system preferences. On the bottom of the BB2 there’s a 3.5mm mini headphone jack, perfect for a set of my IEMs. After selecting the BB2 as both input and output device I could use the rotary in the yellow mode as a simple volume control looking after the level supplied to my IEMs.

Press the rotary button again and it changes from yellow to blue and the rotary has become the microphone gain pot. The easiest way to set this if you’re a Mac user is to simply use the slider and meter for the BB2 mic input in system preferences, which of course you’ll be able to tweak in DAWs and other audio capturing software. You can turn the rotary to set a level, but in operation, handling the mic’s rotary actually introduced quite a bit of rumble, which made it a little more difficult to set an accurate level when it makes more noise than a voice at six inches.

Press the rotary again and you’re now in green mode. This turns the rotary into a balance control between the mic and the computer source, allowing you to monitor your own voice at near zero latency. Perfect for singing along, voice overs and interviews, commentary etc. Below the rotary is a quick mute button which acts on the microphone alone and has a handy red indicator for when mute is active. 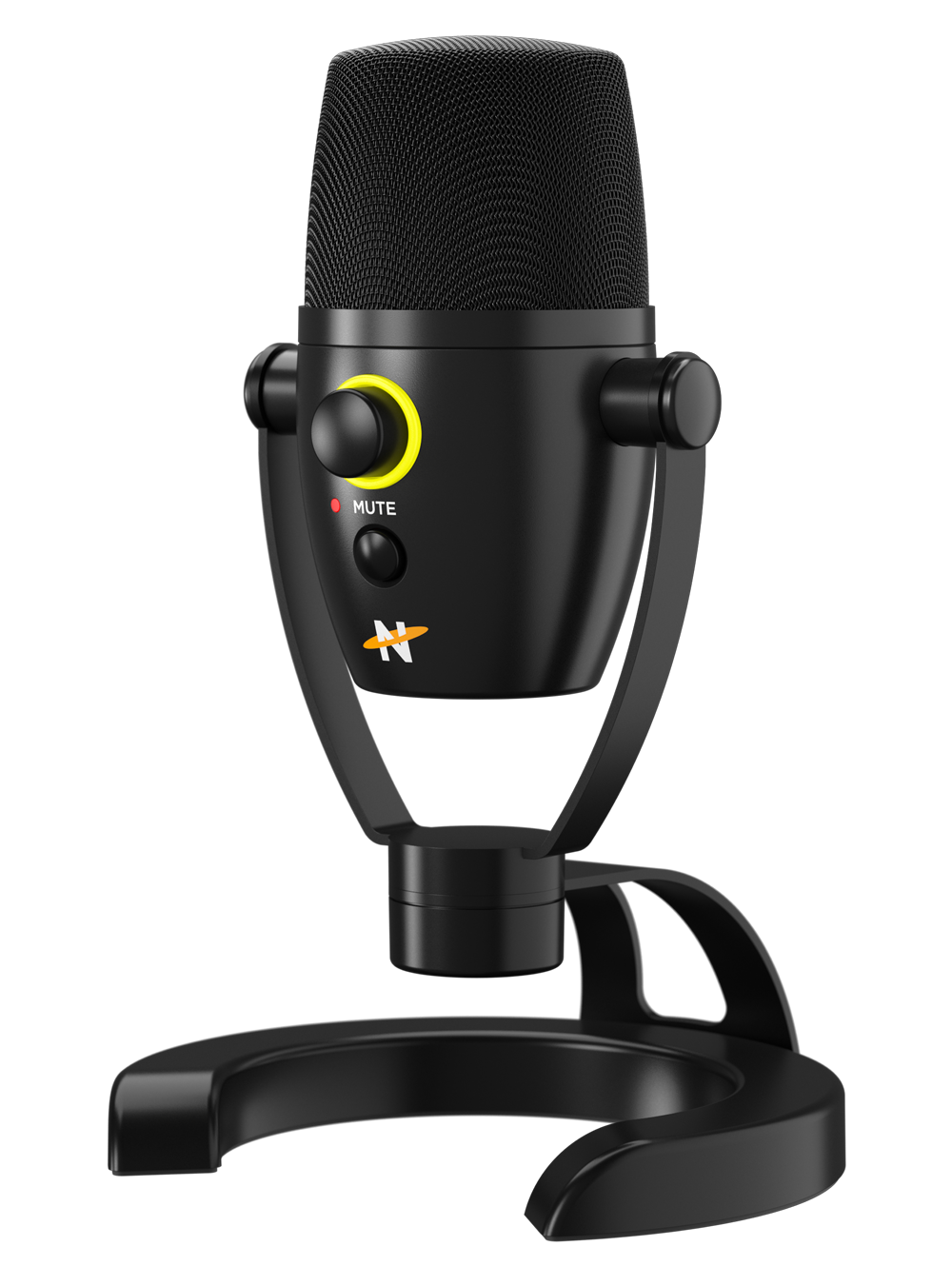 THIS MIC'S PERFORMANCE FAR OUTSTRIPS OTHER MICS IN THE SUB £200 PRICE BRACKET.

Now we come to the good and the even better. Bearing in mind this is a headphone amp in the back of a microphone, it is surprisingly good – way better than simply plugging your headphones into your MacBook Pro. While it isn’t as good as my Universal Audio interface, it’s surprisingly good across the frequency spectrum; probably a little bright in the 3-5kHz region and a little fatiguing at higher listening levels, but overall very usable.

Now to the real surprise; this is actually an incredibly smooth sounding mic with plenty of detail. If you bear in mind this is a cardioid condenser mic and don’t try using it like a dynamic, you can pretty much say goodbye to plosives and other artifacts associated with cardioid proximity by increasing the distance between source and mic. I have a really hard time associating this mic with the budget end of the market, as its performance far outstrips other mics in the sub £200 price bracket whether USB or XLR. I am also pleased to hear that the mic pre and resulting 96kHz digital signal could be routed within my system using Blackhole, which now allows me to route the output of one DAW to another and add in commentary without the need for two interfaces.

I’m suitably impressed by this mic, especially as a simple USB condenser that represents incredible value for money at just shy of £80, not to mention the list of other benefits including its very sturdy construction. My one earlier criticism with regard to handling noise can be improved by removing the mic from the supplied desktop stand and using it on either an isolated desktop arm or floor standing boom mic stand. 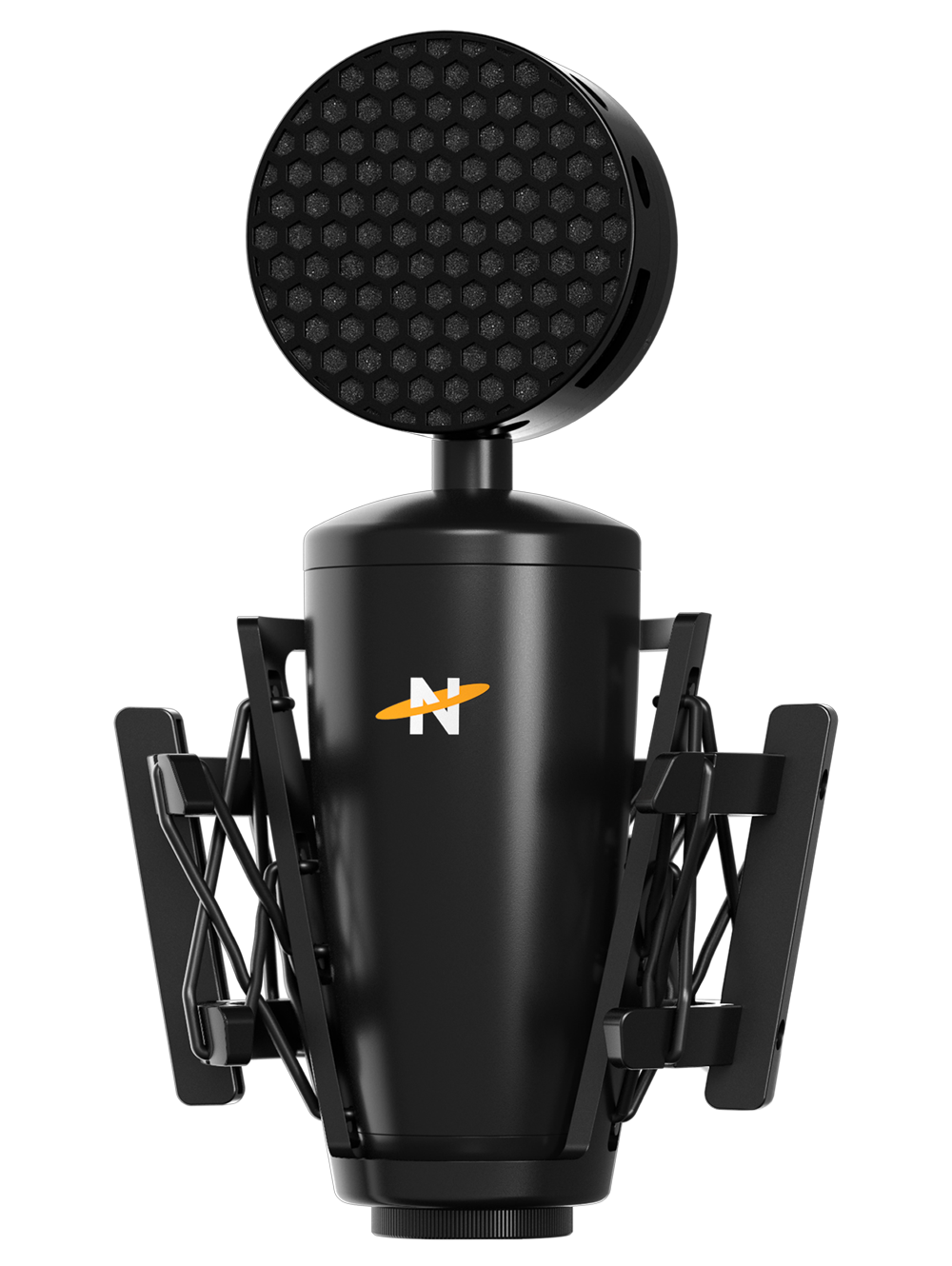 Firstly, the styling is definitely unusual. It has a kind of retro look with a modern rugged construction. While the mic is obviously solid and heavy, I did notice a warning about attempting to remove the capsule and associated housing; I’ve never been in the business of mishandling microphones, even in all my years as a live sound engineer. However after much firm manipulation I’ve come to the conclusion that if a studio mic is going to end up on the deck as a result of a pogoing singer, I’d say this mic would fair far better than a vintage Telefunken U47, ELA-M 251, or dare I say my trusty old 414 which has suffered at the hands of many over-enthusiastic performances!

Another interesting feature I noticed was the secondary grill with open sides, which is a clever idea for keeping your pop shield integrated into the mic design. It very much seems like as the energy and air hits the first grill, it’s diffused sideways – reducing the air pressure at the second grill thus further reducing the likelihood of plosives. Of course there’s nothing to stop you using an additional pop shield. The KB2 is also permanently attached to its suspension system, and again this mount is extremely tough and capable of withstanding a fair amount of abuse. I would also strongly advise you to marry this mic up with a good quality, robust boom mic stand as this mic is not light.

The KB2 is a cardioid condenser and requires phantom power via an XLR cable from either your audio interface or from your preamps or console. I’m not aware of any modern audio interfaces that don’t supply phantom so this really shouldn’t be a problem. I used my UA Apollo x8p so in a roundabout way I was able to test this mic on some of the world’s most iconic consoles and outboard. This was also where my potential prejudices and preconceptions of what a budget microphone should be all went out of the window. In the same way as 25 years ago when I first used an Audio-Technica 4033 and thought ‘wow, this is a good microphone’, here I am again, only I’m saving myself another £300. 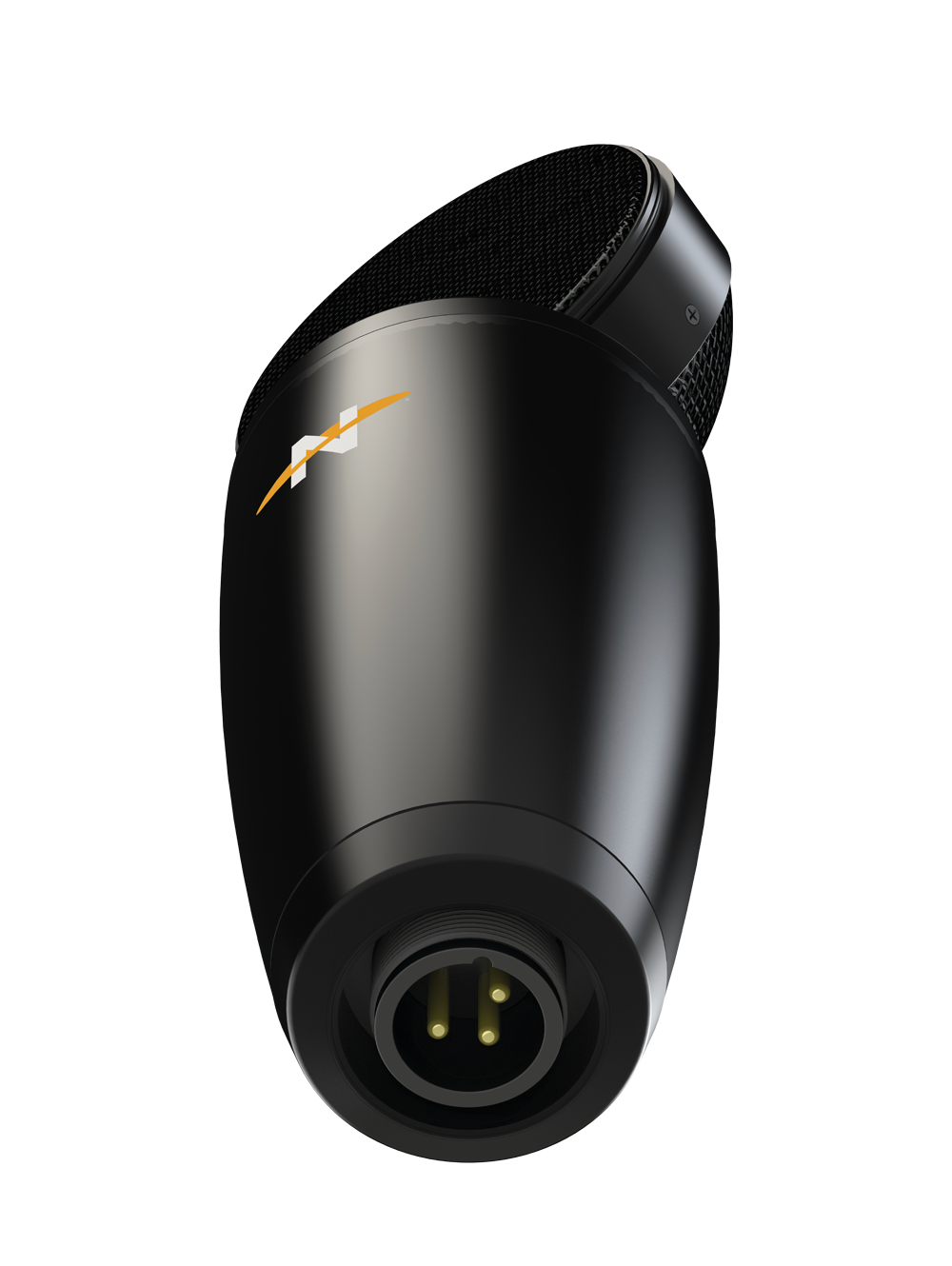 Obviously it’s solid state and it has that clean solid state characteristic. There’s a little more push in the 5-10kHz octave as expected but it is really quiet. I have £1,500 solid state mics that make more noise. What really surprised me and what sets it apart from its immediate competition is the fullness of sound; there are no holes, no muddiness, lots of accurate detail, and the smooth low mids aren’t asking you to reach for an EQ or begging you to back off the mic a little more. Clearly the team at Neat have been busy bees and have steadily been creating the right kind of buzz!

I think it’s a bit of a misconception that you always get what you pay for. While the statement itself is true, the psychological conditioning that it won’t be nearly as good as something three or four times the price simply isn’t true for the BB2 and KB2 from Neat. I wasn’t originally looking forward to attempting this review. Usually if a product is not good, I simply don’t review it, as I prefer to focus on the good and positive. These mics from Neat exceeded all my expectations and then some. My new perspective: never judge a book by its cover or in this case, never judge a microphone by its price point. And when those busy bees back in the hive are making honey this good, stick to it!