On September 2, Nina Nesbitt releases her latest album Älskar, a meditation on love in all its beauty and complexity. Four years in the making, its production saw the singer-songwriter explore artistic avenues previously untrodden. Headliner caught up with her to discuss the record’s creation, the power of the album format and why the streaming model may be turning people away from new music…

The story behind Nina Nesbitt’s new album Älskar, the follow-up to 2019’s The Sun Will Come Up, The Seasons Will Change, is both a unique and familiar one. Unique in the way that it forced its creator to make difficult decisions and adopt new approaches to her craft; familiar in as far as virtually every artist who has recorded and released music during the pandemic will have their own similar story of being forcibly removed from their comfort zone. For Nesbitt, the Covid outbreak not only scuppered her initial plans to release a record in early 2020, but also set in motion a chain of events that would dramatically alter the form that body of work would take.

“I started making the album in 2018 and had a lot of poppy, upbeat songs and was ready to get things going in 2020, but obviously the world completely changed,” Nesbitt explains as we speak to her over Zoom. “So, I waited a while, kept writing and then literally started a new album amidst all of what was happening, which was far more stripped back and raw. At that point I thought I had two separate albums, but I found they merged really well together, so I wanted to put the best songs from each onto one record, taking the best of each style.

“But it was a very strange process,” she continues. “I made half of it in Sweden – I’m half Swedish – and so I go and see my gran there a lot. So, when I’m there I write a lot in studios in Stockholm. I wanted to make an album there and explore that side of me and my family, but then lockdown hit and I couldn’t get into the country, so I ended up finishing a lot of it over Zoom, which was quite a different experience. But I got there in the end and it definitely resulted in a record I wouldn’t have made were it not for those circumstances. It is definitely reflective of the times we were all living in.”

For Nesbitt, the process of selecting tracks from each of the two very different song collections she had amassed was a delicate one. While wanting to simply choose her favorite songs from each, they all had to make sense as a cohesive whole.

“It was tricky,” he recalls. “A lot of the songs I wrote in 2018-19 were more poppy and addressed different subjects. There are a lot of contradictions, but then also you witness the growth of someone in their 20s. And the theme of the album is love in all its different forms, and it is messy, and it isn’t straight forward; you can feel one way one day and feel differently the next. So, it does kind of suit the album. I listened to it as a whole and thought it was the perfect album for me right now, with these different dynamics. It’s unexpected but it works really well.”

Aside from being forced to whittle down two albums into one, Nesbitt found that the various Covid lockdowns dictated that large sections of the album had to be made alone or via Zoom. And in the case of four songs, she took the reins as producer for the first time in her career.

“I am an only child so I’ve always been very comfortable in my own company, and I’ve always written on my own,” she says. “I wrote a lot of the songs on my own on the last record. But I was really excited about this one, because I was getting opportunities to work with people I’d always dreamed of working with, but not being able to meet them in person because of Covid was really frustrating. And Zoom is tricky. If you’re set up technically it’s fine, but if not, it can be a bit laggy. When you’re writing in the room with other people, it’s quite magical, you can really capture a moment – that’s hard to do over Zoom.

“But on the other hand, I write all my own lyrics, so it was quite good to be alone without any outside influence. It also pushed me to get more into production - I produced four songs on this album, which I’m really excited about. I was living in the smallest flat you’ve ever seen during lockdown, so I moved in with my mum and set up in her little office and room where all the cats live [laughs]. I set up a mic and put a towel over my head to deaden the sound and make it feel more like a studio, and I recorded the vocals like that. And towards the end I moved into my own studio for the first time, which is so exciting and such a luxury. I found myself often saying, ‘Why aren’t there more female producers?’ So, I thought, why don’t I become one?” 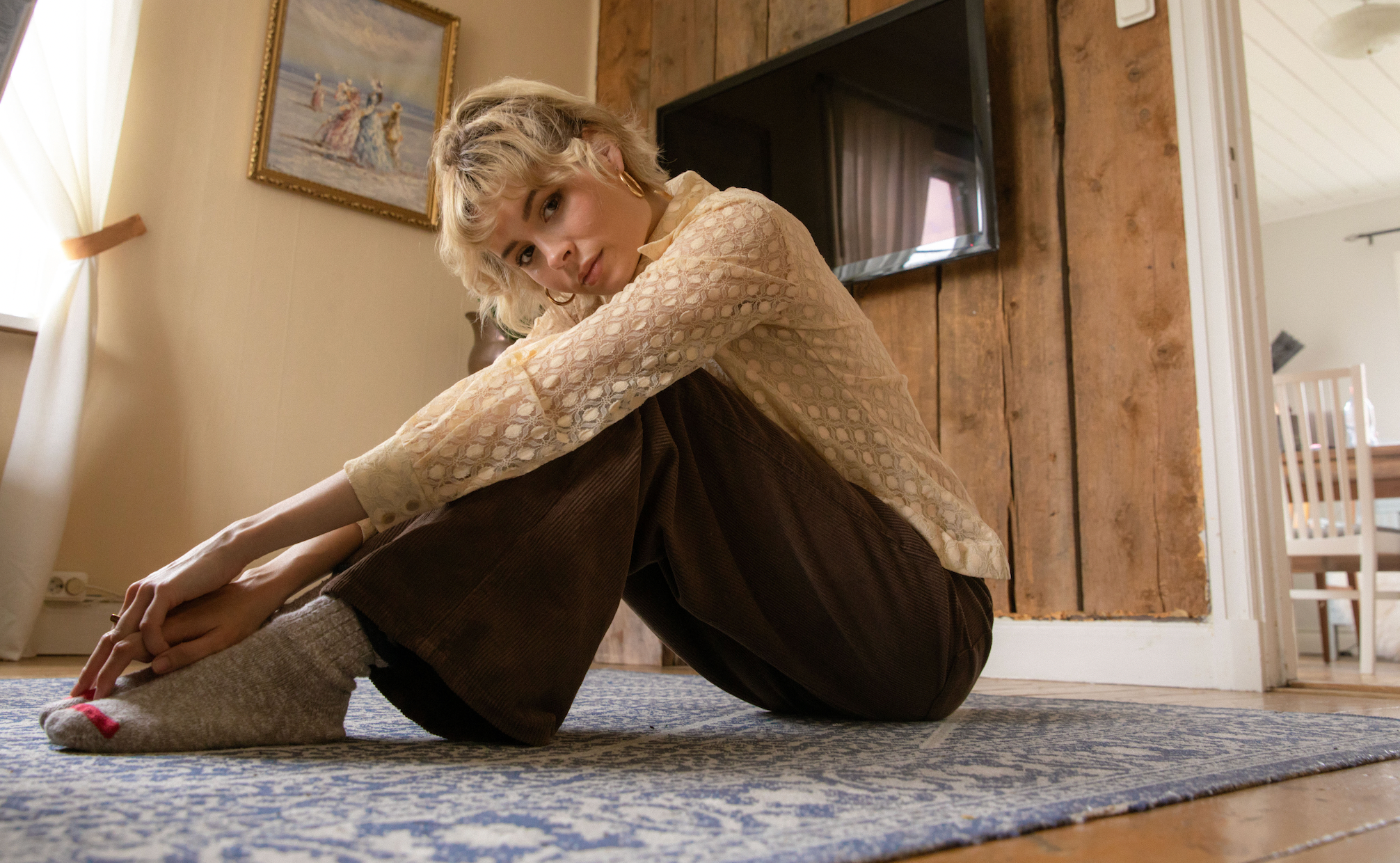 Writing in a room with people is magical. You can really capture a moment. Nina Nesbitt

While determined to make a body of work that was both sonically and thematically dynamic and cohesive, Nesbitt also notes that, in a music industry so heavily centered around a singles-driven streaming model, she is currently listening to fewer albums than before. As she puts it, the sheer volume of music available at one’s fingertips at any given moment is almost overwhelming when trying to discover new music.

“I listen to a lot less music these days,” she notes. “And a lot of other writers I’ve been with recently say the same. I don’t know if it’s because there is just so much. I don’t even know where to start. I do listen to more singles, and if it’s an artist I’m invested in I definitely will listen to the album from start to finish. But I do listen to fewer albums now, which is interesting as I never thought I’d be saying that.

“I’m also finding music in different ways. Before, it would be through hearing something on the radio or finding it on Spotify, whereas now it’s like hearing something on a TV programme or TikTok. There is so much music out there and it’s hard to find what you want. I feel like I’m discovering tracks in new ways. There is obviously lots of amazing music out there, but I don’t have the time to search for it. Now people are just waiting to be presented with it. Which is kind of sad, but it’s just the way it’s going.”

Since finishing Älskar, Nesbitt has also been writing music for other artists, something she has been doing throughout her career. Before our time is up, she explains how different she finds the process of writing for others compared to creating her own material.

“It’s totally different,” she closes. “It’s a different mindset and I can’t do both at the same time. Now that I’ve handed the record in, I’ve been writing some songs for pitch, which is when you just write a song and pitch it out to artists or DJs, and then I’m doing sessions with other artists in the room. That feels more like a job to me – a job that I love – but it’s like, you’re there to get something done for someone else. Writing for me, it has to be more personal. And I like to create a world and a theme around an album.”