Party at the Palace: DiGiCo Consoles deployed for Jubilee Extravaganza

The most anticipated weekend of the year, the Queen’s Platinum Jubilee celebrations, took place at the beginning of June in London with a roster of remarkable events, the centrepiece of which was the star-studded Jubilee Concert featuring performances from Queen and Adam Lambert, Ed Sheeran, George Ezra, Duran Duran, Craig David, Andrea Bocelli and many more.

Staged by BBC Studios for a live audience of 22,000, and broadcast to over 13 million viewers, DiGiCo consoles played a central role in an intricate audio design by Ben Milton Associates, that managed three discrete stages and complex time alignment.

Audio rental company, Britannia Row Productions, was appointed to realise the huge logistical challenge, which took place in the environs of Buckingham Palace, with the audio system for the landmark show spread across three independent stages in front of the Palace. The first stage, designed as a catwalk in the round, was constructed around the Queen Victoria Monument (QVM), with two further stages erected in front of the palace railings and linked to the circular stage by a walkway, one hosting orchestral-based content and the other rock and pop acts. 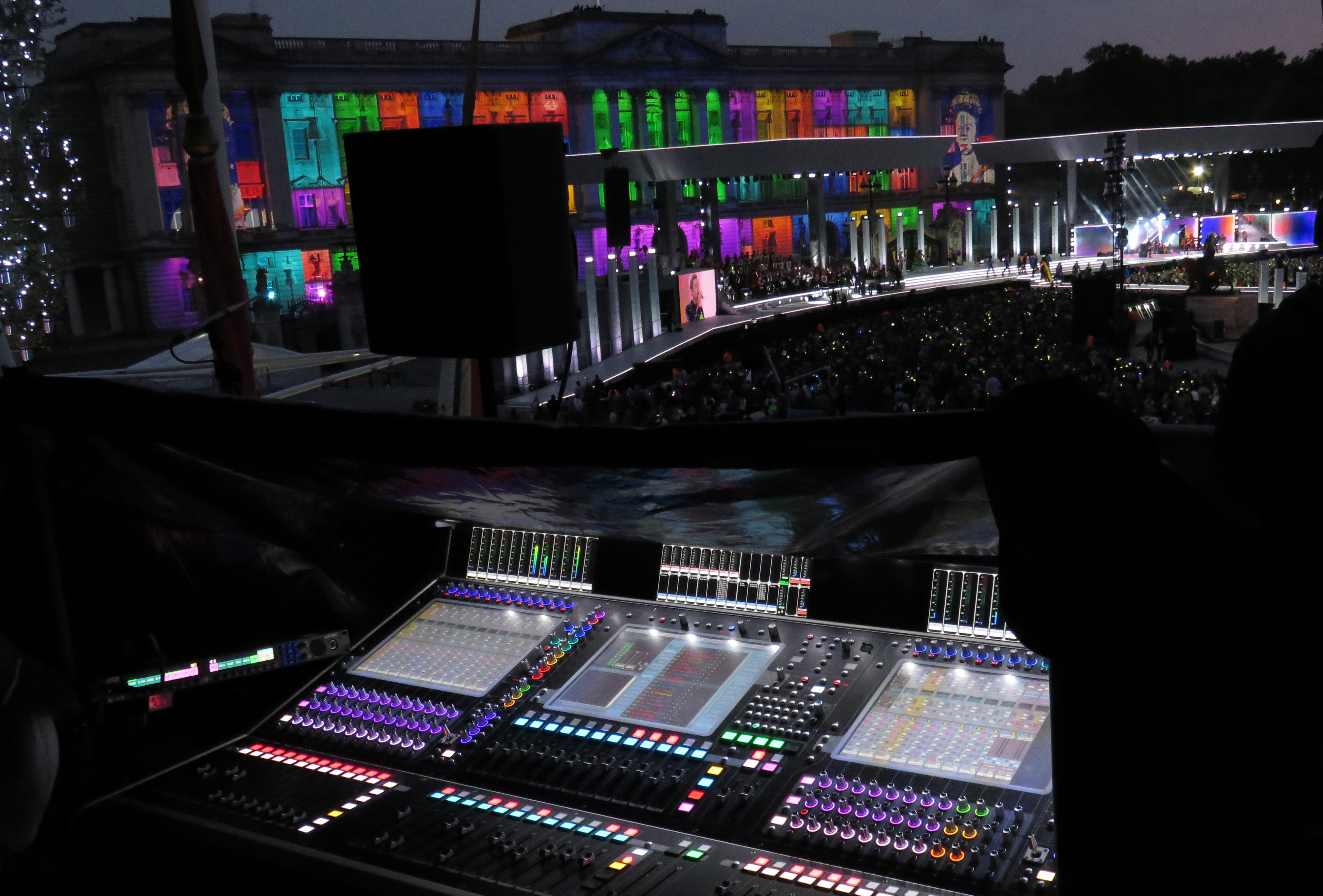 “Everything was time aligned between each stage, including synchronising when artists were performing from two stages simultaneously,” explained sound designer, Ben Milton. “For instance, if there was a performer on the QVM stage, complemented with the orchestra on the second stage, we wanted to make sure the sound image would be coming from the right place, and timed to work together. Balancing the sound image and time synchronisation was our highest priority.”

DiGiCo consoles were installed throughout FOH and monitor positions, and there were also three OB trucks, allocated one per stage.

The audio system’s full console list included five Quantum 7 and three Quantum 338 consoles from DiGiCo’s elite range, alongside an SD5, SD10, and the compact SD11i from the industry standard SD range, with 19 supporting SD Racks, five mini racks and several DMI/Orange boxes. Quantum 7 consoles were installed at either end of the Orchestral stage, managed by Simon Fox at FOH and Billy Birks on monitors. On the north, Rock and Pop stage, a Q7 was selected for FOH and for monitors, manned by Stefano Serpagli and Phil Down, respectively. Finally, on the QVM stage, an SD10 was chosen for FOH, managed by Chris Vass, and a Quantum 338 at monitors for James Neale.

It was a huge infrastructure to manage but the DiGiCo consoles, particularly the Quantums, not only coped, they excelled. Josh Lloyd, Brit Row

All the FOH boards were fed into a separate Quantum 7 console which acted as a matrix mixer, and from there into a TiMax immersive spatial system for distribution via an L-Acoustics PA system. Each FOH console could send feeds to its own dedicated OB truck for broadcast duties, one of which was installed with an SD7, and mixes could be returned to stage from FOH for monitor mixes. The team utilised gain sharing on the orchestra stage as it had a huge channel count of 192. All monitor consoles across the stages had access to feeds from every other stage, so they could dovetail from the stage before them to the stage after, selecting any inputs and content they needed for their mix.

“This design meant I could navigate all the busses through the master Q7 console, so the engineers had the choice of which buss to use, so it would all be time synchronised. Also, if there were any last minute staging changes, we could just reallocate the buss,” explained Milton. “The matrix Q7, additionally took all guest speaker mic feeds and VT packages which could be placed on top of whatever else was coming through, and the monitor access was managed by bussing everything through the Q7. It played out like a choreographed performance - bussing all FOH feeds in that manner, with all three stages mixed independently for the broadcast trucks, and then the celebrity guest speakers could be mixed in around it.” 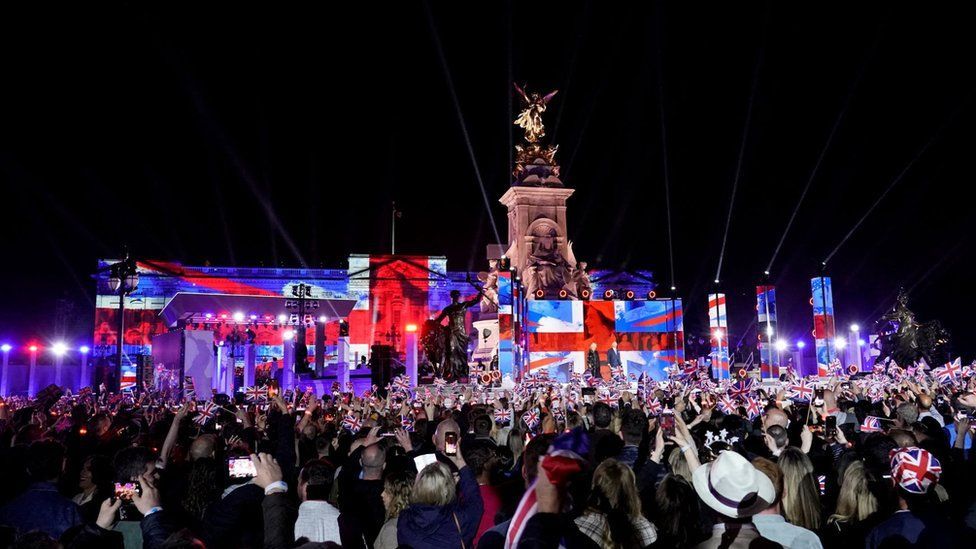 “It was DiGiCo’s buss structure that made the timeline synchronisation possible. Being able to organise settings in a particular way was a huge advantage, whether the consoles were used for delay for one part of the show, or as the main system on another part as the action rolled from stage to stage,” noted Josh Lloyd, Head of Engineering – Event Support at Brit Row. “DiGiCo also offered great flexibility and built-in redundancy, as not only was the Q7 master console running Dante, we also had several Orange boxes offering a wealth of network options. For things that were show critical, being able to support multiple formats was a huge advantage, as we needed to connect MADI, Dante, AES and analogue devices.”

Following a detailed pre-production period, the onsite setup was swift due to DiGiCo’s offline planning and design tools. The event schedule stretched over four days, with Trooping of the Colour and Lighting of the Beacons on Thursday, full dress rehearsal on Friday, pre-show on the Jubilee Concert on Saturday, and the Pageant show and Mall procession on Sunday. 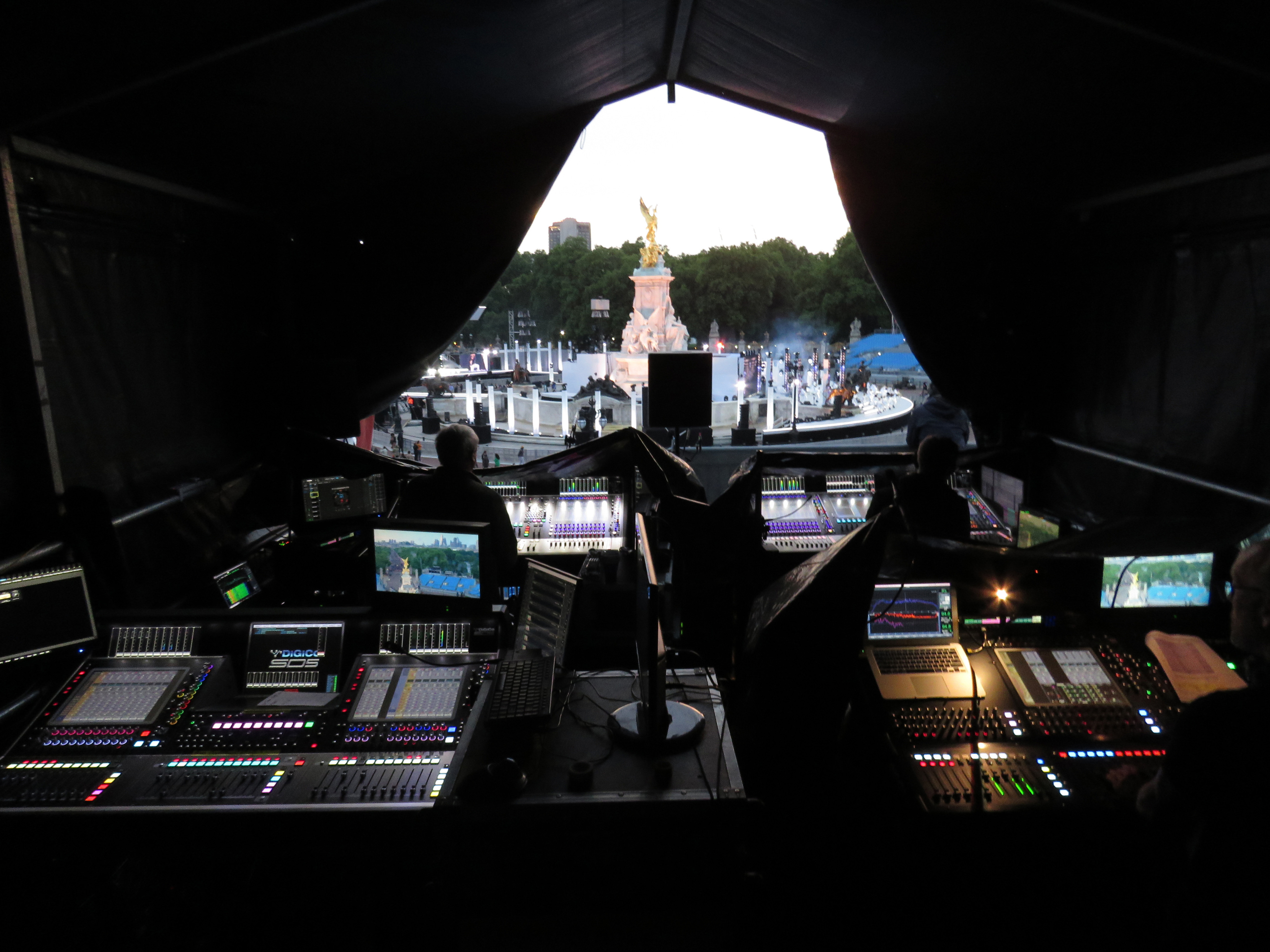 “DiGiCo is always my first choice, so I always knew DiGiCo was part and parcel of the event from the outset,” said Milton. “All the engineers were comfortable with it and all the acts used the concert boards - it’s a rider pleaser. I didn’t have to bring in any other consoles, apart from for Queen who wanted to use their own touring consoles, which happened to be two Quantum 338s - one for Adam and one for everyone else – plus an SD5 at FOH. It was great to work with Brit Row and have them on board for the technical deployments.”

“It was a huge infrastructure to manage but the DiGiCo consoles, particularly the Quantums, not only coped, they excelled,” concluded Lloyd. “The technology is just so flexible and I don’t think there is another product out there that could have handled this project. The weather was typically British - either boiling hot or chucking it down – which presented the usual production challenges, but from a worldwide stage point of view, we showed the best of what we can do for what was undoubtedly the biggest event of the year.”