Keane frontman Tom Chaplin joins Headliner for an in-depth chat about the making of his second solo album Midpoint, finding his voice as a songwriter, and the frightening realities of entering the middle stages of life…

A smiling Tom Chaplin appears before us over Zoom, as he joins us from the study of his rural Kent home. “It’s looking peculiarly arid in this part of the world,” he says with a laugh. “I was in London yesterday, and after the summer we’ve had there was something quite exotic about standing outside in the rain, which is an unusual thing to say as an Englishman.”

The Keane frontman is here to talk about his second solo album Midpoint, the follow-up to 2016’s The Wave. His warm, sunny disposition is befitting of the conditions outside, yet somewhat at odds with the subject matter of his new record.

As its title suggests, Midpoint is a concept record of sorts, charting the journey from youth into midlife and the fears, questions and crises that can so often accompany it. Which is not to say it’s a bleak listen. There is sufficient hope and light drifting through its minimalist musical corridors to offset the gentle melancholy and introspection of Chaplin’s lyrics. Notably, the voice that defined so many of Keane’s biggest and best loved songs appears not to have aged a day since the three-piece emerged almost 20 years ago.

“People may or may not know that the main songwriter in Keane is Tim (Rice-Oxley) who plays piano, and as the years went by, I had this growing desire to have my own outlet for writing,” Chaplin says, explaining his initial move into songwriting. “But that was always stymied because I was very envious about how good he was at writing and quite insecure about doing it myself. So, I put it on the back burner and didn’t really try that hard, and I was a great big drug addict for a long time, which is not really that conducive to writing songs.

“Keane then went on hiatus, and that was partly because I wanted to have the time and space to write my own music, but my addiction took a real turn for the worst and my life got into a proper crisis. But then I got sober, finally saw the light and there was a wave of creative energy that came out of me. I wrote tons of songs that comprised the record The Wave. That was a huge outpouring of energy and I got to the end of it and thought, what am I going to write about now?”

Bereft of inspiration, it wasn’t long before Keane returned to the studio and subsequently the road.

“We got out on the road and of course that envy and competitiveness started to bubble up in me,” he laughs. “Then Covid struck and I had the time and space to invest in that process again. I also had a lot of questions about this particular part of my life. The combination of wanting to write again and having quite a meaty subject to write about was the spark that began Midpoint.”

If The Wave burst the dam of arrested artistry built up by years of substance abuse, youthful excess, and pent-up frustration at being unable to tap into a creative flow within Keane, then Midpoint is the sound of Chaplin navigating waters that may appear calmer on the surface but are no less perilous beneath.

“I see people all around me, the same age, who have in various degrees gone into self-destruct mode, or have wanted to tear everything down and start again, or have become very depressed,” says Chaplin. “It really requires a lot of careful thought and processing to get through it without making a real mess. You know that at some point you are going to hit midlife, and there is probably a bit of denial about it when you are younger, like, that’ll never happen to me. But suddenly it veers around the corner and there it is. And a lot of the questions that came up were quite scary.

“I have been in psychoanalysis for over 10 years now and a lot of what I talk about with my therapist informs what I write about in the songs,” he continues. “I suppose I felt that I had arrived at a point where instead of relentlessly moving forwards and being in pursuit of goals and dreams and being young, I wasn’t in that space anymore. In some ways that is quite frightening, and you have to assess where you are at; whether you are happy with the decisions you have made and the life that you have.

“In terms of the writing, I had been doing a bit but didn’t feel like I had anything that set me alight, but then I wrote the song Midpoint and it almost came out fully formed. Even though it is quite an unusual structure and quite a journey of a song, it just came out and lyrically it was saying everything I wanted to say. After that I had this desire to get more written, and everything else flowed from that.” 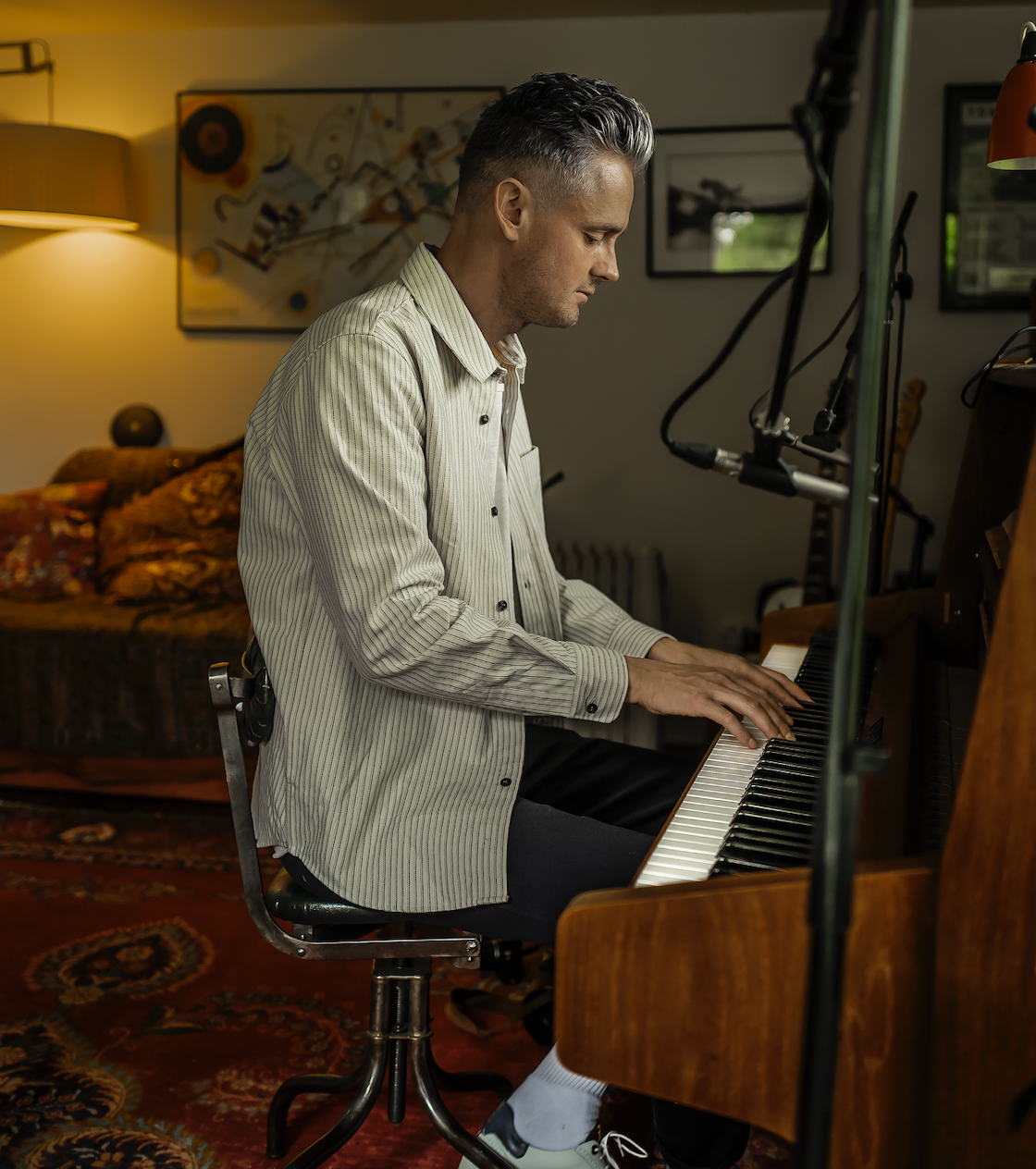 You can try clinging to being relevant, or you can do something that is more honest. Tom Chaplin

Having taken the decision to place his personal life and his place in the world under the microscope with Midpoint, Chaplin also had to consider his relationship with the music industry and the type of artist he wanted to be as a forty-something pop star.

“There are two ways you can go,” he states. “One is to do everything you can to cling on to being relevant, whether that means collaborating with certain people or trying to make music that sounds a certain way. Or, you can do something that is what I would regard as more honest and make music that reflects the stage of life you are actually at. As soon as I had the idea for Midpoint and some of the early songs, I thought, ‘no one has really written a whole album about this part of life’.

“And there is a reason for that, and that’s because pop music is still largely perceived as being a young person’s game, and you have to write about the exhilaration of falling in love and getting your heart broken. I can’t write about that these days, I have to write about what is appropriate to where my life is at. This is a stage of life that all of us are either going to go through, are going through or have been through, so it is going to have some poignancy and will resonate with some people. So, this seemed like an exciting chance to make that kind of record.”

Chaplin was also keen (no pun intended) to make a record that sonically represented the maturity and authenticity of the subject matter. To fulfil this ambition, he drafted in revered producer Ethan Johns – son of legendary producer and Beatles engineer Glyn Johns – to produce the album.

“The way a lot of music sounds today, everything is super slammed, very compressed, even quiet songs are very loud, and every waking minute of every song has to be filled with something,” says Chaplin of today’s approach to pop production. “One of the interesting things about making this album is that it is full of dynamics, and we made it in quite an old-fashioned way. It is a bunch of musicians playing live in the room. There is a sense of interplay and honesty in the music, there is no vocal comping or tuning or putting stuff on the grid to make it sound absolutely bang on. I wanted to make something that was honest thematically and in the way it sounded. For some people that might not compute, but I hope in the long run it has a lasting impact because it is doing something that isn’t necessarily what everyone else is doing, but to me seems meaningful and authentic.

“I’m really grateful to Ethan for the influence he had on me. He is interested in style as opposed to fashion. And he had so much faith and belief in the process, it was so lovely to be carried along by that energy, because without him I may have got scared. But now I can see from people’s reactions that he was right. And I feel grateful that he was willing to take me on and nurse me through this transitional period.”

Perhaps inevitably, we turn our attention to Peter Jackson’s The Beatles: Get Back documentary, which documented at length the writing and production of the Let It Be album, and in which Glyn Johns played a pivotal role.

“I just adored it,” says Chaplin of the film. “It was so fascinating. I was making the record with Ethan at the time it came out and his dad features quite frequently in it - wearing some of the best clothing - so Glyn was there for a lot of it. There were so many things I loved. I found John so interesting. There was something surprisingly deferential and friendly about him, and I was expecting him to be more aggressive. But there was a serenity in him that maybe only that group of friends would allow.

“It also made me feel a bit sad in some ways,” he sighs. “When Keane first started, we were a bit more like that, sitting around together, just churning out ideas and everyone bringing songs to the table. I felt a bit sad that that original idea has died. But what made Keane a success was clear, and I can’t begrudge that.”

For now, Chaplin is gearing up for a run of live dates in support of Midpoint that will keep his hands full for the foreseeable future. But does he envision a time when he might be able to take more of a leading role creatively whenever Keane reconvene?

“When we went back to making the last Keane record there had been a six or seven year gap,” he recalls. “Part of me was thinking, ‘well, I’ve made a solo album, maybe I can have a part in the creative side and maybe Tim and I can work together’. But it just didn’t work out like that. Tim likes to work on his own as it’s quite a private process for him. And anything I had that I thought might be worthy of a Keane record… it just felt strange. Those dynamics were carved in the rock over 20 years ago. It feels very weird and difficult to change that, and in a way, why bother? I have my own outlet now.”

While it seems there is little chance of Keane smashing the rock into which their blueprint was carved, the chances of Chaplin stemming the vein of creativity he has found at this point in life are even less so. Evidently, there is plenty of room for both to co-exist. And for fans, that is likely the best outcome of all.