On August 19, UK singer and songwriter Phoebe Green releases her long-awaited debut album Lucky Me. Headliner caught up with her to find out about her new musical direction, writing as a form of therapy and having her music grace the final series of Killing Eve…

Phoebe Green is one of those artists whose personalities radiates through everything she does. Candid lyrics laced with wit and intimacy are filtered through melodies and choruses so infectious you feel you must have heard them before. And while these pure pop songwriting sensibilities have been evident in most of her releases to date, they’ve never felt as potent as they do in her first full length debut album Lucky Me.

Out on August 19, Lucky Me draws upon the qualities that helped mark her out as one to watch amongst indie rock circles over the past three years and refines and repackages them into a far more polished, electronic, poppier proposition. Preceded by a string of standalone singles and EPs that hinted heavily at Green’s considerable skill as a compelling storyteller, it’s an album that sees the guitars and full band sound that previously shaped her music largely side-lined, instead placing her lyrical vignettes front and centre.

“I was gearing up to make this album for way longer than it took to actually make it,” Green explains over Zoom, joining us from her parents’ house by the sea. The sense of familiarity and openness that runs through her music is also present in conversation. She’s immediately engaging, funny and often laughs her way through sentences, making for a disarmingly refreshing contrast to the sometimes stilted nature of Zoom interviews. “I was planning on making an album from the moment I released my first EP (Dreaming Of) in 2019, but the songs just didn’t come. I don’t think I was experiencing anything evocative enough for me to want to write about it. Because of lockdown I wasn’t very inspired.

“Then it got to this time last year and I met up with my friend [songwriter and producer] Dave McCracken, who I wrote a lot of the album with. I told him I was stuck and didn’t know what to write about, and he said I probably had more to write about than I realised, and that I wasn’t letting myself feel anything. And that was so true. I wasn’t in a place where I could actually process anything or really delve into the way I was feeling. As soon as he said it, I realised had to look inwards, rather than looking for external inspiration. That’s when it started, and the album was written in about two months. It just came so quickly.”

Prior to starting work on Lucky Me, Green had worked almost exclusively in a solo capacity, rejecting the notion of collaboration on the grounds that it would mean she “wasn’t good enough to do it on my own”. Inevitably, when writing commenced with McCracken, sessions took a very different form to what she was used to. 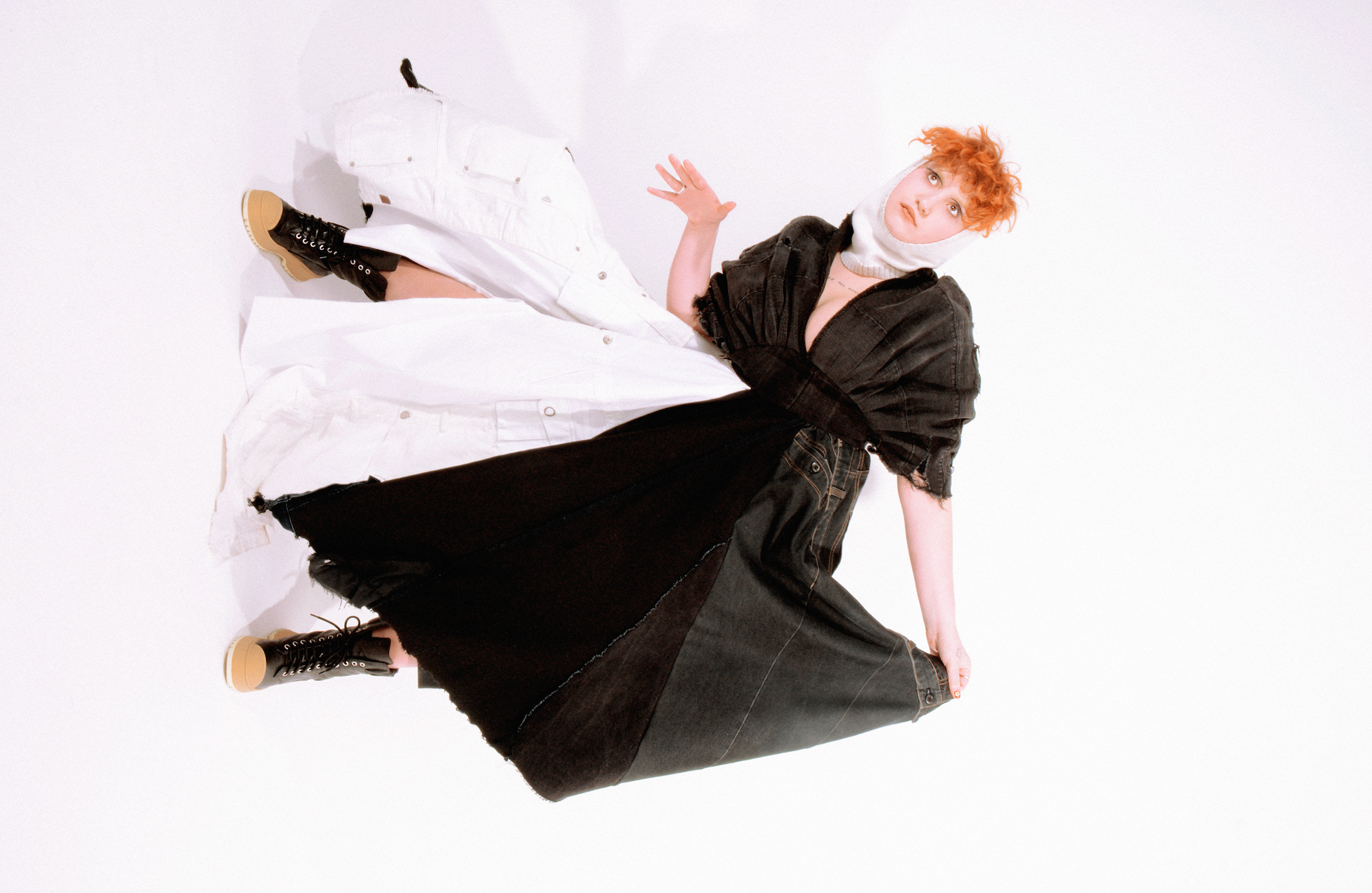 I had a lot of unprocessed emotions I didn't know how to express. Phoebe Green

“Because we have a very close friendly relationship, we tend to just talk and I fill him on various things and he’ll be like, ‘we should definitely write about this’! Then we go into a room and he’ll ask what sort of sound I want. I’ll say, ‘well, I think for this subject I want a hopeful sound or something really miserable or beat heavy’. Then he’ll create a vibe and make a beat and an atmosphere, I’ll write the lyrics and have a vague melody as I’m writing, and within an hour we put them together and it’s like, ‘sick, done’,” she laughs. “Then we’ll keep refining it and by the end of the day it’s in its best form.

“When I first started, I was very closed off and really didn’t want to collaborate,” she continues. “Now, I’ve come to realise that I can write the song myself but I’m not a very good producer, and don’t have great instrumental knowledge, so the songs aren’t going to be as good if I’m that precious about it.”

While the decision to collaborate with McCracken dictated that the writing process would differ drastically from anything she’d done before, the move away from her indie rock roots towards something far more electronic was more a matter of circumstance.

“I don’t remember making a conscious decision, but when I started writing demos in lockdown and I wasn’t with my band or working with anyone else, I realised I don’t really like playing guitar,” she says. “I’m not that good at it and I don’t have the patience to practice, so I started doing my demos on Logic, finding a beat loop and doing basic chords - not even on a real keyboard, just using the actual computer keys,” she laughs. “And because I didn’t have the presence of so many instruments that I had to bear in mind, I was way more focused on what I wanted to say and how I wanted it to sound. When I started working with Dave, I realised I enjoyed that space and how it makes the listener focus on what I’m saying more. And because I grew into myself over that period and became way more self-assured, I wanted the lyric and the vocal to be the most prominent part of the track. The instrumentation on this album very much complements either the mood of the song or exactly what I am saying.”

Green also notes that collaborating has given her greater self-belief in her songwriting ability and musical convictions.

“Half the reason I didn’t enjoy co-writing previously wasn’t anything to do with the people I was working with, but because I found it hard to say if I didn’t like something,” she says. “So growing up and having more conviction and more of an idea of what I want to sound like makes it so much easier for me to say, ‘I don’t like this, but maybe we can try this’.”

As we reflect on her childhood years and initial attempts at songwriting, Green tells us about her first foray into music. Laughing from the off, she recalls, “when I was about 12 I spent all my time on the family computer and I was like, I’m going to write a song on the computer webcam, and then minimise the screen and play it to my dad and ask him if he like this new artist I’d found. It was so painfully obvious it was a child singing this weird melody and these strange words. I even recorded two separate videos so there was this kind of question-and-answer thing,” she trails off.

“I think when I started GCSE music, I realised I wanted to be completely focused writing songs. The composition stuff I really enjoyed. I had a lot of unprocessed emotions and experiences that I didn’t know how to express, and when I wrote my first song it came out in five minutes. I played it for my teacher, and he was like, ‘did you just do that’?! It felt so easy for me to write about my feelings and that just grew.

"I always do my lyrics first. It is first and foremost a way for me to express how I’m feeling. I use it like I’d use a diary, because I tend to overthink things a lot and replay things in my head. It started when I was about 17 as I’d be lying in bed because I couldn’t sleep, thinking about all these things causing me anxiety. I’d just write it all down before I went to sleep and try to make a song out of it when I woke up. I’ve never written a song where I do the music first. I just have too much to say.”

Before we say goodbye, we touch upon Green’s recent contribution to the final series of hit BBC series Killing Eve, which saw her 2021 single IDK soundtrack the opening scene of one of its episodes.

“I still can’t believe it,” she beams, explaining how the use of the track came about. “It is one of my favourite TV shows ever! I got an email from my manager, and I just couldn’t believe it. I was, and am, still obsessed with Killing Eve. When my song was on it, I thought it might just be instrumental, or 10 seconds, but for the song to be used on the whole intro scene was just mind blowing. I had no idea how it would be used or how much of it would be used until it was on. I was with my girlfriend and my sister, and they were like, what the hell?!’ And then my mum and dad sent me a video of them watching it. I feel like I’ll talk about it for the rest if my life! It’s one of my favourite achievements ever.”

On current form, it’s likely there will be many more to come.