Rookes on releasing POPNOTPOP, subverting genres and the problem with playlists

Following the release of lead singles Consent and Paint, artist and producer Rookes releases her new album POPNOTPOP on November 9. Headliner caught up with her for a chat about the challenges she has had to overcome in completing the record and subverting contemporary pop as we know it…

Almost three years in the making, POPNOTPOP marks the culmination of a period of intense artistic discovery for Rookes, as well as her procurement of the coveted MPG scholarship and £3,000 of Help Musicians funding. As such, she sought to capitalise on these opportunities to the fullest, driving her formidable skills as a vocalist and multi-instrumentalist to create a record brimming with invention, melody and wonderfully skewed pop sensibilities. There’s also broad blend of genres on display, with the likes of Bloc Party, Radiohead, Chvrches, Skrillex, and M83 among those cited as influences on the outcome of the record.

Here, Rookes joins us via Zoom from her setup at North London’s Ten87 Studios for an in-depth look inside the making of her most ambitious release yet, the challenges that carved its creation, and the homogenous nature of today’s industry…

It’s been a busy year for you so far! What have you been up to?

There has been a lot of focus on getting the PopNotPop album out. It’s a Help Musicians grant-funded album, and I won that grant in 2020. But then 2021 was an unexpectedly awful year for a lot of people for different reasons. I had a slice of that going on myself - I had some slightly tricky personal and professional issues, so I took a break from making the record and came back about six months later and mixed it with Katie Tavini, who isn’t a mix engineer by trade, but knows a hell of a lot about engineering. So together we mixed the album and it sounds absolutely banging.

There had been a lot of preparation in the run up to that, as it’s an independent release. We looked at getting a label involved but you are subject to their timelines - they aren’t really interested in taking on yours, so that could have created delay in getting the album out. And because it was a grant funded album there is a deadline, and that deadline had already been extended. So I thought, let’s just make it an independent release, because I know how to do those. And for me, as someone who is moving into production rather than seeking a solo artist career, it has meant that I am offering this as a nice, chunky portfolio of all my production skills. It was very important to get the album right from that perspective. This album is going to be what people find when they Google my name, so I wanted it to sound absolutely brilliant and shiny and wonderful, and it does, so I’m very proud of it!

I’ve also been working with a handful of artists to develop their material, which has been utterly wonderful. I worked with Dirty Freud on their record Meet me In The Real, which is great and was so much fun to work on. I also worked with Ruby Tingle who is on the same label (No Such Thing). We worked on a track for her called Familiars, which is glorious and Kate Bush-like. And I have also finished some work with an artist called Jagara.

And I’ve also I ran a series of live events called We Move for the Music Hackspace, so it’s been very busy! 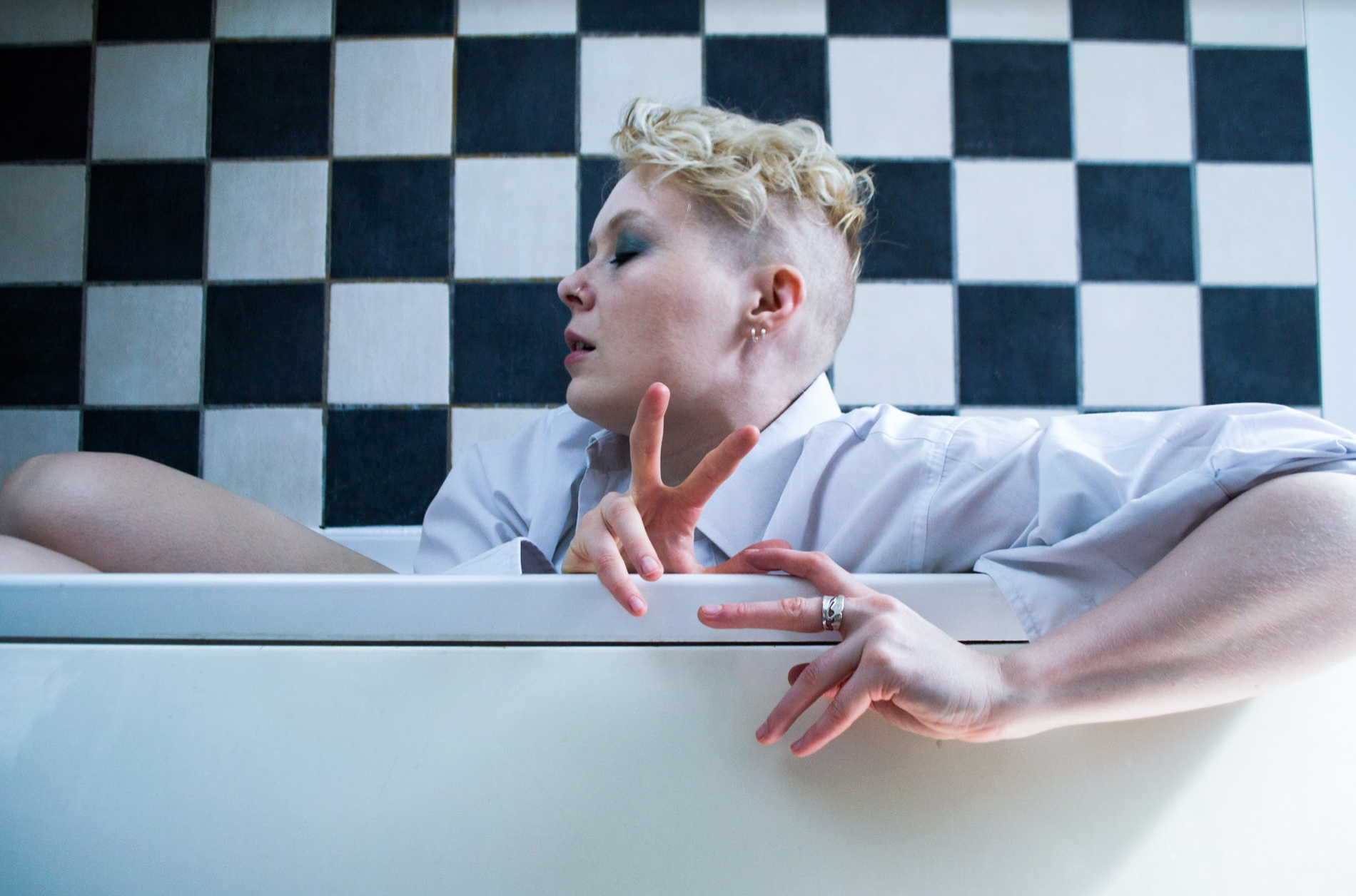 Pop today has become incredibly homogenised. Nothing was resonating with me. Rookes

How did you go about securing the grant for the album?

I’d always wanted to make a full-length album. I think every music maker wants to experience that. Towards the end of 2019 I’d finished [previous record] Liminal and my then manager and I were discussing the next project, and I knew I wanted to produce it myself, and I had enough material to start a full length album. But then something awful happened, which is that I completely wiped my hard drive by accident. To this day I don’t know how it happened. We tried to retrieve that data, but we couldn’t. I had the songs in my head and on paper with handwritten chord progressions, but I lost all of my demos. I was utterly devastated. I was laying on the floor of my tiny flat in Hackney making an unearthly noise with my head in my hands while my manager was on speaker trying to console me, saying it’s going to be OK!

Between us we came up with this idea to be really purposeful about what the album was going to sound like and what the purpose of it was. Through that, I started to rebuild the songs and we came up with the idea of PopNotPop, which is that I write and I love pop music, but a lot of it has become very homogenised in terms of the production styles used - partly because of the interference of algorithms and the way that people listen to music, and because corporate labels decide, based on what people are listening to, what should be produced. So it all ends up sounding the same. There was very little pop music that was resonating with me.

Also, I had an artist pop in for a chat about possibly working with them, and I played one of my new tracks to them and they said something that I had instinctively known but hadn’t articulated, which is that they were fascinated by the fact I had chosen not to EQ the lower mids out of my voice, which as a female pop voice, is what we are used to. We are used to it sitting in the frequency range of around 500-1000 Hz. That is something that came up when I was mixing with Katie, as I had originally done that. I EQ’d the hell out of my vocal. I have a very unusual tonality to my voice because I have a classical background and I’m a contralto, but I also have a lot of soprano range, so it’s an unusual voice that people would probably associate more with folk music than pop music. Katie basically slapped me on the wrist and said I’d EQ’d all of the quality out of my voice. She was right, and it’s just to do with what we’re used to hearing, particularly from pop musicians. Consequently, that song has made it on to a ton of grassroots playlists but very few genre-based playlists. We’re so conditioned into this sense of genre, genre, genre that we find it hard to make that leap on a cognitive level.

How do you go about discovering new music?

I am not a huge fan of the algorithm recommendation model because it doesn’t work for me very well. My pallet is broad but my real fixational love for a song or a sound is very specific. I like what I like, but it can be found in any genre. I discover music more purposefully through Tidal and I am in the habit of looking at their new releases weekly, and I will usually find three to five tracks or artist I haven’t come across before that I might be interested in. I do tend to pick up a lot of music through sync as well, mainly through TV and film. I recently caught up with a series called The Rook, which was on Channel 4 back in 2019, and it had this song that was just so great and I immediately looked up the soundtrack, found the song and looked it up on Tidal, so that kind of thing is really important for people’s music discovery.

How did you go about making this new record in your new studio setup? Has it changed the way you work?

It really has. It’s made me a lot more disciplined. Music is my hyper-fixation which is why I’ve made it my job. Before I was in a studio, I would just roll out of bed and stroll down to the little studio in my pyjamas and then sit stewing for four hours. There wasn’t a good psychological barrier between my workplace and my living space. But having this studio space gives me a place of work that I have to go to and I have a set amount of time in which to get things done. Time is now literally money. Doing it that way does dial down some of the spontaneity, so I’m trying to find way to reinvigorate that, as I don’t want to lose that. It's a work in progress.

In terms of how the album evolved, I wrote endless lists of notes of things to be done while I was on the bus or at home, and then I’d go into the studio and do them. That was the only way I felt I could get from one end of the album to the other without meandering off in different directions. That is the potential downside of self production, especially if you have a broad palette.

How does it feel to be at the finish line now?

It varies a lot. There is a lot of catharsis in getting it into the public space, bit there is a lot of anti-climax, which is what happens when you’ve been working on something for such a long time. And there is managing your own expectations. You can have a favourite track on an album and everyone else gravitates towards a completely different track. And that’s fine, but you have to remind yourself not to react too much to other people’s reactions.

Listen to this interview in full below.