Last month, Sleaford Mods graced the stage of Nottingham venue The Chameleon as part of this year’s National Lottery Revive Live Tour, which sees artists performing in intimate venues across the country to support grassroots music venues. Headliner caught up with frontman Jason Williamson to talk the band’s early days on the grassroots circuit, how they broke out of it to become one of the most unlikely success stories of the past 10 years, and why such venues are a “salvation” for so many independent artists…

Now in its third year, the 2022 National Lottery Revive Live Tour sees the likes of The Amazons, Lianne La Havas, The Coral, Paolo Nutini, Charli XCX, and, of course, Sleaford Mods, performing one-off shows in support of the grassroots sector. Held in partnership with the Music Venue Trust, The National Lottery is covering all touring costs and production fees for the shows.

In an in-depth, typically frank, and insightful interview, Williamson fills Headliner in on everything from how Sleaford Mods came to be involved in the campaign and their early gigs on the grassroots circuit they strove to break out of, to playing Glastonbury for the fourth time and the “bulletproof brand” of Iggy Pop and Liam Gallagher…

When did you first become aware of the National Lottery Revive Live campaign, and how did you get involved?

This was the first time we’d come across it, but it was a no-brainer in the sense that The Chameleon is having a spot of bother. The building has been put up for sale for a while, so any sort of lift we could give them, we wanted to. That’s where me and Andrew [Fearn] met, it was the only place in Nottingham at the time 10 years ago that would give Sleaford Mods any kind of a shelter, so to speak. We really had to work hard to get gigs at most other places. People just couldn’t get their heads around it.

This gig is primarily to help The Chameleon out, but also to bring a bit more consciousness to the idea of grassroots venues. There wasn’t a lot of love lost when we left that environment, but these places are important for bands that come through and need that sense of salvation. A lot of the people who run these venues have a really open mind about music and creativity, so it’s important to keep that psychology going as well as the actual venues.

Do you think the plight of grassroots venues is overlooked by the industry, particularly by those who might be able to make a difference?

Yes, there is a lot of naivety and a lot of disinterest. And that’s us included to a certain degree, because we are now playing the echelons of stadiums and bigger positions at festivals and headline slots that are taking in arenas, and you get swept away with that. So, although you can bring some consciousness to the subject because you have your following on social media, and it does go into their heads for two seconds, primarily you’re at the mercy of fate. We’re not going to spend all of our time campaigning for the presence of independent venues; we got into this game to be successful and every other band is the same. I don’t care what they say, where they’ve come from, how many years they have spent doing this that or the other. The name of the game is to get somewhere. But when you are asked to do these things it’s important to do them.

Prior to Sleaford Mods, were there any grassroots venues that you’d frequent as a punter or as a performer?

Not really. I didn’t like going to gigs. It wasn’t of interest to me. What was interesting to me was getting ideas sorted, so it would be studios and rehearsal rooms I’d hang about in. But that only came later. A lot of the time, getting into a studio and demoing with a band was few and far between. The rehearsal room was more of a common room than anything else.

Can you remember your first live performance?

It was in a pub. I did an open mic night, and I went down there with my semi acoustic guitar and went through a load of songs I’d rehearsed really intensely at home. And as soon as I got onstage that was it. Like, oh fuck, this is completely different [laughs]. That was my first taste of it. That was around the late ‘90s.

Did playing live more and more help you figure out where you wanted to get to creatively, or was that something that you worked out more in the studio?

It was more rehearsal studios, and life in general. Venues were the bonus points. The venue was where you finally arrived to do a gig, because you have already established your ideas. That was the treasure in the chest, the end of the rainbow. Sleaford Mods formed out of hopelessness and no other options. 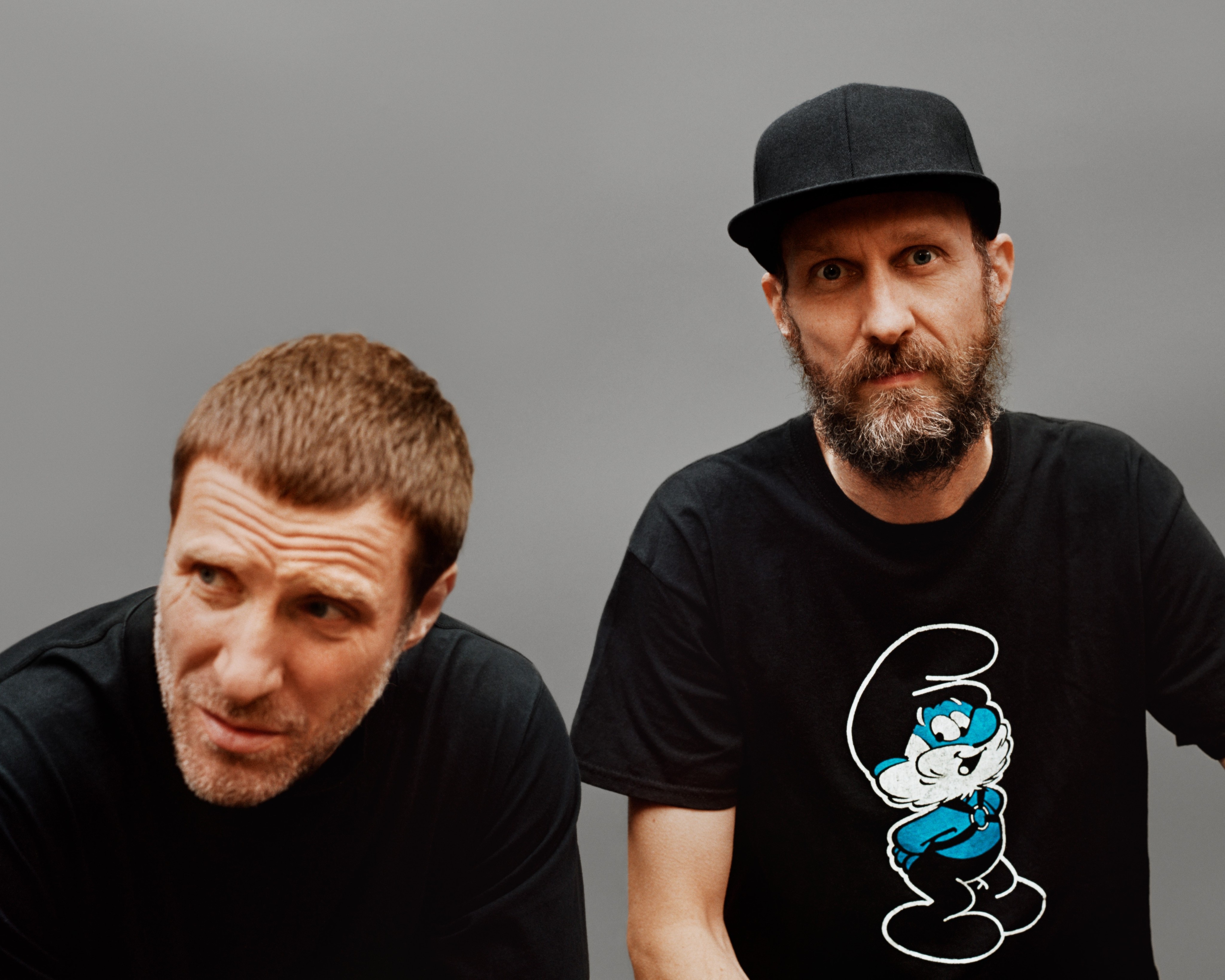 When you and Andrew first formed Sleaford Mods, how did you establish yourselves as a live act?

We did a few gigs at The Chameleon, and there was a little bit of a vibe going off, then we released Austerity Dogs and we did a support slot with a band at The Rig which is part of Rock City. That came out and it started to kick start a bit of local interest. Then we went over to Belgium to play a festival that drew all of the DIY promoters in and we were quite high up the bill, and that’s how we started really. It was basically a big music expo in this big art building, and we had loads of promoters emailing as after and we started gigging a lot in Europe. That’s when the music press in the UK started to take notice. We didn’t start doing stuff like the O2 venues until we were supporting bands like The Specials.

You recently performed your fourth and biggest Glastonbury set yet. How did that feel?

It’s a bit weird for bands like us. We were looking at other bands that have done that – I think Oasis have only done it three times, but we have done four. Radiohead might have done it four times, but you don’t generally get invited back to Glastonbury, so it was really nice. And to give such a strong performance – from what people tell us! – was great. If I remember all the words, as far as I’m concerned it’s a good gig [laughs]. It’s done us the world of good, to be honest. It doesn’t matter how long you’ve been going or how much coverage you’ve had, the minute you get in front of an audience, that’s it. You’re as good as your last gig, so it’s really important to keep the live thing up. I was watching Iggy Pop and Liam Gallagher the other night and thinking, ‘if they can fucking do it so can we’! To watch them live is quite a thing, they both have this bulletproof brand going on, and that’s what you want.

How did you find playing those big festival slots for the first time?

You tailor it down a bit, you don’t turn as many lights on, and you keep it even more minimal than if you were doing your own show. We didn’t find a problem with it. I’m not very good with negative reaction towards the band, so sometimes that bothered me a bit, but it was fine. I like meeting the challenge, not worrying about the audience reaction, and just being yourself. The minute you stop being yourself is when it becomes problematic.

Do you tend to stick around at festivals to watch other artists?

I try to if I’m interested in them, or if it’s someone I don’t really like and I just want to confirm that they’re shite [laughs]. But generally, you don’t get a lot of time, you’re in and out. It’s such a weird job. I was speaking to Amy Taylor about this from Amyl and the Sniffers, and you can’t really tell anybody about it – you can’t be telling someone who works in an office five days a week about the negative aspects of being in a band! It’s not going to work, so you have to keep it to yourself a lot of the time. At Glastonbury this year there were loads of bands I wanted to see but didn’t get a chance. I even wanted to go and see IDLES, but it’s just impossible,

How is your relationship with IDLES these days [Williamson and IDLES frontman Joe Talbot have been subject to a very public falling out, resulting in Williamson being highly critical of the band]? Have you listened to the latest album?

I quite like some of the songs on CRAWLER, and I did apologise to Joe Talbot actually, and he was very nice about it all. But I haven’t had a chance to apologies to the rest of the band. All that stuff is something I’ve kind of grown out of, so I feel a little bit bad about it, but there you go. He accepted the apology, so that’s nice of him.

What’s next for Sleaford Mods?

We’ve got a new album coming soon, hopefully, so that just needs finishing over the next couple of months, and it should be out next year at some point.

You can find out more about The National Lottery Revive Live Tour here.