Sonarworks certainly hit the nail on the head when they released their incredibly easy to use and very popular Reference 4 software. This useful tool took the guesswork out of your recording and mixing by correcting the sonic response of your speakers in relation to the room characteristics and any other anomalies within your working studio environment. Now, the company has released SoundID Reference, the latest version of this incredibly useful headphone and speaker calibration software.

The aim, to produce a flat response at the listening position, thereby facilitating professional sounding mixes that translate to all the output mediums associated with modern music making. I’m sure we’ve all at some point in our pasts, after several hours of painstaking work, been horrified to discover that what sounded stunning in our studio sounds awful in the car!

Not to restrict your workflow in any way, Sonarworks also incorporates a headphone module that comes with a range of preset corrections for all the popular models of studio headphones. And should you wish for a more accurate correction, you can send them your actual headphones for analysis.

This year has seen a massive change in the way music creatives work, with many moving their studio setups into their home. For those of you who have never heard of or used SoundID Reference from Sonarworks before, you’re going to find the prospect of no longer second guessing yourself very tempting. If you’ve recently moved from a studio you know and love to a garage, spare room or bedroom, could there potentially be a way of transferring a little of that magic sound from one studio to another?

Firstly, I’d recommend checking to see if your particular model is on the list of available headphone profiles, as this is the quickest way to check out SoundID Reference for yourself.

When I first opened SoundID Reference it asked me for permission to access core audio, which you must allow. The front panel of SoundID Reference prompts you to enter your interface; in this case I’m using the Antelope Audio ZenGo Synergy Core USB interface which the system immediately saw.

I selected it, and was then prompted to ‘Add a new headphone profile’, ‘Create a new speaker profile’ or ‘Open an existing profile’. I selected my Sennheiser HD600s from the vast list of profiles available. The whole process, including download time and opening the account for my free 21-day trial, took around 15 minutes. 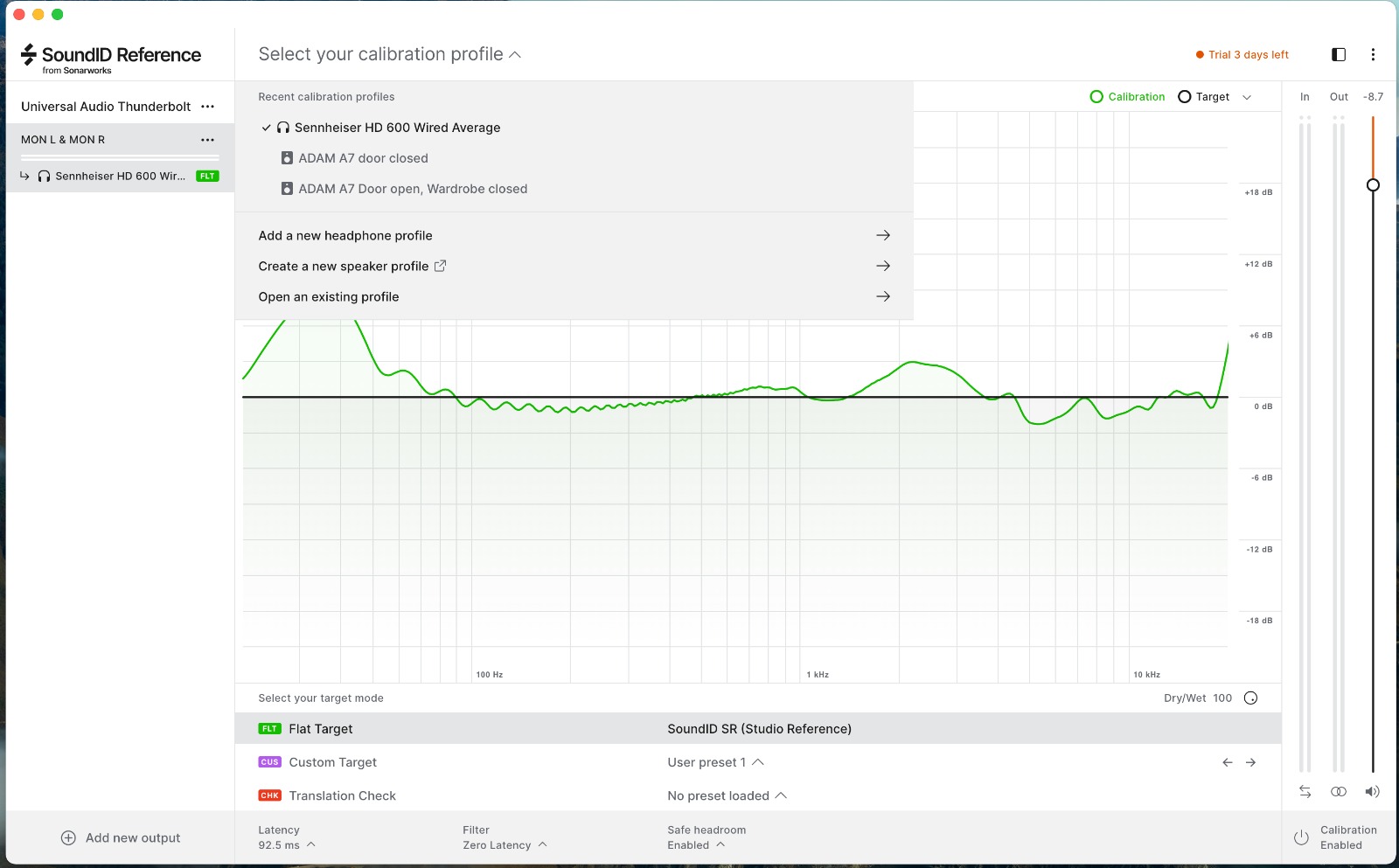 I love the HD600s, and I’ve had them for around 20 years. This, it is suggested, is one of the reasons for sending your headphones back to Sonarworks and having them calibrated. Let’s face it - everything changes with age.

The profile seemed to suggest a bit of bass roll off from 90Hz falling more significantly from around 60Hz. This was something I was aware of, but I was not aware of a number of other areas in the high mids like -3db between 2 and 3kHz or the spikes at 5kHz and 8.5kHz. Ironically, while none of these alterations are major, save for the bass, when I first started listening to tracks I knew well, there was a much better bass response and a well balanced sound.

After living with SoundID Reference on my system for a week now, I would feel slightly hesitant at the prospect of mixing without the headphone profile loaded. Come to think of it, I don’t want to listen to anything without it loaded, even with or without the audio interface.

Creating your own speaker profiles requires a little more time than simply picking a preset, but is a whole lot of fun. So much so that I did it several times, partly because I have every intention of making a video to show the process from start to finish, but mainly because I like unusual tones and noises. It was also a fascinating experiment into how objects within your studio space can acoustically impact your listening position and working environment.

Simply plug in the Reference mic and select ‘Create a new speaker profile’ from the drop down menu. I found it easier to put the Reference mic on a stand and then take it off to do the speaker distance measurement, but leaving the mic stand in position just helped me keep a more accurate listening height when moving the mic to the requested positions. All-in-all, the first speaker profile probably took about 25 minutes, but subsequent measurements took about half that time.

Now you’re able to create a number of profiles with a number of variables to see what produces the least acoustically hazardous environment for your listening position, and where possible, to keep both speakers as matched as possible. You might think that sounds a bit crazy, but even at less than a meter away, my ADAM A7 monitors sounded different from left to right!

This is of course a common issue when it comes to home studios, and particularly those of us with dual purpose spaces. One of the other great benefits of running SoundID Reference from Sonarworks is a more consistent sound from one environment to another. It makes working on elements of the same projects in different facilities even easier.