A Song In A Day

The challenge: write, record, and mix a song from scratch in one day. The players: The Violet Collective. The venues: Numen Studios, Shepperton; and The HUB, St. Albans. The biggest obstacle: the bloody M25. Headliner dives in...

For most young creatives making music today, options are limitless: endless tracks available in your DAW, multiple plugins at the ready, and everlasting studio time. So often, projects can end up in 100-plus tracks because, well, why not? So we thought why not get a group of young musicians who have never had to deal with those kind of restrictions and pressures, and throw them in at the deep end?

As accomplished as these chosen musicians are, they’re more used to recording their music safe in the knowledge that it’ll inevitably be syncopated, comped, edited, or chopped up to ‘make it right’.

In the time it would take vocalist, Jack, to get from his Richmond home to Numen Studios in Shepperton, he had the unenviable task of writing a main hook and, if possible, all the lyrics – he had some chords in mind, but that was about it. Drummer, Trood, and bassist, Andrew, would be going in cold, listening to something brand new for the very first time.

TWO HOURS AT NUMEN STUDIOS
Numen Studios is a very cool, and very new place – it opened its doors in October 2018, and on arrival, it’s clear a lot of thought has gone into its design and layout: a nice spacious control room, well treated, good monitoring, with a great sounding Yamaha upright, and two soundproofed instrument rooms – one for drums, one for guitars.

Jack doesn’t have his lyrics nailed just yet, but we have a structure, and a great vocal hook, with a rough drum loop to give Trood an idea what kind of groove it might need. A few listen throughs, and he’s in his booth raring to go. We allow just one practice run, then we’re in. As he’s laying down his track (he does it in three takes – impressive) – Andrew has plugged into his mini Vox amp and is playing along to the rough demo through headphones.

When Trood’s happy with what he’s got, he heads into the control room to take a listen – the guys have done a cracking job on the sound of the kit, using exclusively Shure mics, and in some interesting ways – but more on that shortly. First, bass.

There’s a Shure SM81 and DI on the bass amp, and Andrew has an instant groove going – it’s clear these guys play together regularly. There are moments though where I can see he wants to chuck his bass across the room when he’s making the same duff note (we’ve all been there, particularly me), but after a few run throughs, he’s got his take. The guys play with such feel, it’s frightening – and what’s great about this is, they clearly care about their performance – they’re constantly asking the engineers, and Jack, if everything is getting the thumbs-up. They’re a touch stressed, sure, but totally dedicated. 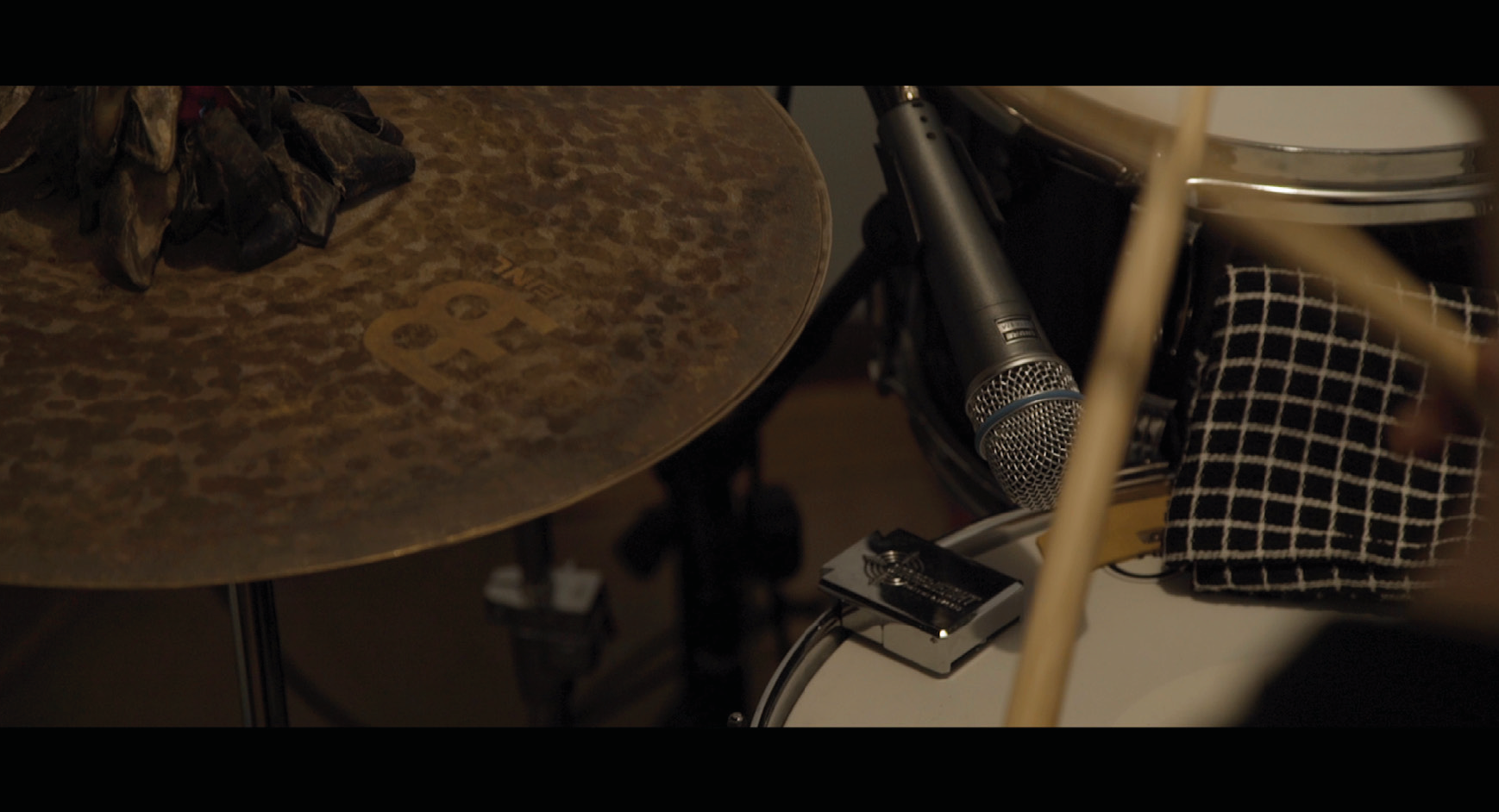 Being able to change the capsules on the Shure 181 means we have choice and flexibility when using stereo miking techniques. Numen Studios

As the engineers are tweaking their sounds, we see time is against us, and we really have to leave. We’re on deadline, remember! A slightly hysterical Trood barks: “you’re going to syncopate the shit out of this, yeah?” “No, mate,” we smile, and transfer the files onto our hard drive. As we make a sharp exit, he looks like he’s seen a ghost – but he needn’t worry, he’s nailed it. It is interesting, and quite amusing, to see his distress at not being able to spend longer to tweak, comp, edit, you get the picture. It’s a different way of working – but that’s the idea.

Before we leave, we grab a quick word with the Numen guys to find out more about the mic setup.

“Using just Shure microphones was a nice treat for us, as we normally rely on traditional techniques: a Beta 91 on the Kick, a ‘57 on the Snare, and our SM7b as a mono room mic. I found it inspired decisions I wouldn’t normally make, such as using the Beta 98 on the resonant head of the kick, the outcome of which was really punchy, tight, and controlled. The clip on the bass drum was also great, as it saved space in our small drum room.

“And we were also blown away with the Beta 181s on toms; the detail of the transient, low end, and control of bleed is amazing. I’m always fighting harsh bleed from other microphones, especially the day to day standard tom microphones.

“The side address of the 181s also makes them easier to place. We also made use of the ability to switch the 181’s capsule to set up a mid/side array in the hallway to capture the ambience of the kit. Being able to change the capsules on the 181 means we have choice and flexibility when using stereo miking techniques. The different options they give you is amazing, and I can imagine they would be great on most instruments.”

INTO THE HUB
En route to The HUB, Headliner’s studio, Jack is tapping lyrics into his phone as we negotiate the bastard that is the M25 – the song will be written from the perspective of a vampire, apparently.

Of course it will. We finally roll into St. Albans around 4pm – we’re behind schedule, but just in time to take delivery of two power cables for our Chandler TG2. We’re going to cut vocals using our Vanguard Audio Labs V13 tube mic, into our Cadac console, inserting the Chandler pre on the way in, then into our RME Babyface Pro.

We double track four vocals to create a haunting section of ‘ooohs’, which is our main hook for the track – I love the V13 mic, the air it has in addition to its warmth is something to behold – and the harder you drive the TG2, the better it gets. Once I get my head around the gain structure, what a sound we’re getting; a real variety of tones on offer, depending on how hard you push it. 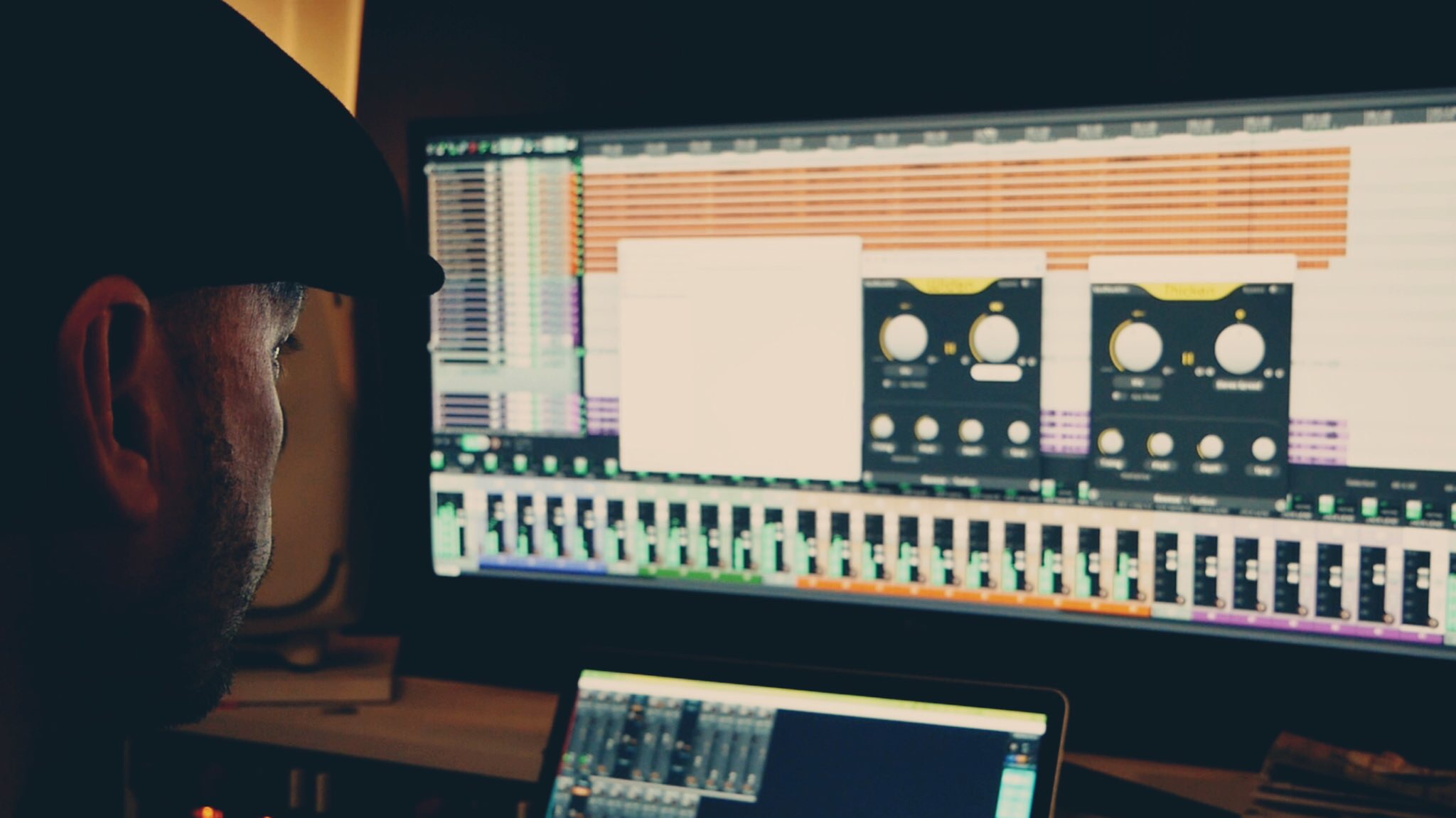 The way you can thicken a vocal very precisely and intricately using the Sonnox VoxDoubler is pretty mind blowing. The HUB Studio

As Jack moves from head to chest voice, I find myself backing the TG2 off in real time, which is really cool – the knob equivalent of riding the fader, basically. It really feels like we’re creating – that’s part of the beauty of using a bit of quality analogue hardware like this.

In terms of processing, in addition to my usual Waves go-tos - the SSL E Channel, CLA-76, R-Comp, and TrueVerb – I decide to experiment with the Sonnox VoxDoubler thickener and widener plugin on the lead vocal which, I have to say, is pretty mind blowing, not only due to its ease of use, but the way you can, as the name of the plugin suggests, thicken a vocal very precisely and intricately, and really increase the stereo image at the turn of a virtual knob. Incredible. The doubler is extraordinarily ‘real’ sounding; and can save a lot of time and energy – particularly handy for today’s session, too. I also dabble with the widener setting on a couple of guitars – I find you can really shape tone with it.

The Babyface Pro is such a good bit of kit, too – super easy to use, ridiculously clean signal, and the preamp inside is that good, before I had the luxury of using this analogue kit, going direct into the interface with a vocal was still great. Same with guitar, bass, keyboard – anything, really. It constantly impresses me, this unit, and due to its portability, it tends to come everywhere with me when I know I need to mix, or tweak audio on the move. Or just listen loud to my playlists on the train..!

Within two hours, Jack has nailed the whole vocal, and it’s sounding sweet; his double tracking is sublime, as ever, and the tone is crazy good. I tweak further with the Sonnox plugins, but not too much more – there’s a deadline to meet!

It’s now 7pm, we have an hour to go, so let’s get mixing. The room, since being calibrated, is such a quality sounding space – Genelec 8341s with a sub, and GIK panels throughout has eliminated all reflections, and kept it nice and true, with that all important bit of musicality. Shout-out to Andy Bensley at Source Distribution for tuning it – legend! It also helps that the building it’s situated in is so old: no wall, floor, or ceiling is remotely even! I always mix as I go, anyway, and I tend group my vocals, guitars, and drums, applying parallel compression to each group where necessary with the Waves H-Compressor. For me, it sounds better, sits better, and makes mixing easier.

Before I allocate the last 30 minutes to tidying up the mix, I check over the guitars, keys, and strings we’ve also added (which we did in between the vocal takes). Spitfire Audio’s LCO library works a treat for creating a very real and in your face string quartet; and nice Rhodes and Hammond sounds come courtesy of Native Instruments Kontakt Library – always a winner.

We render the file with six minutes to spare, and play it back... What’s the verdict, guys?

“Well, the first session at Numen was great – laying down drums and bass, and getting the sounds we did so quickly was impressive – and reassuring! When it comes to the rhythm section, I always try and achieve something that fills the space, but also has bite to it,” says Jack. “Then taking the tracks back to The HUB was perfect. That Chandler TG2 preamp is sick; I actually don’t think the vocals have ever sounded better – and we know that mix room so well now, we were able to just hit the ground running soon as we landed back in St. Albams. It’s mad that we got all that done in a day! Kind of loving the track, too, I have to say!”